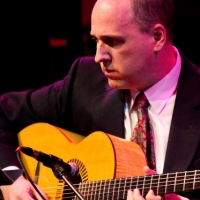 Anyone have any experience using any of these for just a Gypsy Jazz guitar setup?

I had a chance to play with the Synapse in my room, but that is not a real world gig experience. It sounded a lot more full than my AER or Hendrickson but that can be expected comparing to a small enclosure. The Synapse comes in at close to 50 pds and probably needs a stand. If I can get something lighter that has a full sound I'd prefer it.