UNICO is unique – the perfect amp to reproduce the sound of any acoustic instrument or voice. Every one of its components, from preamplifiers to loudspeakers, has been designed for natural and accurate response. UNICO’s circuitry is designed like the circuits found in professional-quality recording studio electronics – you will hear the difference in accuracy and precision when compared to other acoustic combo amplifiers. 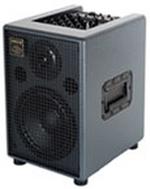 UNICO has a built-in analog spring reverb designed using an innovative Class Acircuit producing the smooth and musical reverb sound guitarists, violin players and others have been seeking. UNICO’s rich reverb is a sound more often found in the concert hall than in the inexpensive digital effects processors of many acoustic amplifiers.


Four inputs provide the flexibility performers have been asking for.

1. MIC IN: input for dynamic or condenser microphones, including switchable 48v phantom power.


2. DYN IN: an input optimized for connecting microphones or other electrodynamic transducers having low impedance and low level. Perfect for Schertler DYN-Series electrodynamic transducers. Includes 10v switchable phantom power which allows the connection of electret condenser microphones such as the Schertler BLUESTiCK Marine System. Resonance control effective at 180Hz.


4. LINE IN: a high impedance input with optimal sensitivity for high-level audio signals like CD players, karaoke, effects, keyboards and other types of transducers.


Each UNICO channel includes the following:

* Equalization, from high to low, allowing a wide range of tonal variations to be explored. DYN IN includes a resonance control effecting a notch cut at 180 Hz.

* AUX OUT: similar to the line out, but regulated separately by the AUX volume. For recording or monitoring.

* INSERT: a stereo jack used to connect the input and output of outboard signal processors or effects such as equalizers or compressors. Also used for the optional Schertler UNI-Pedal to control the master volume.

* LOW CUT: cuts frequencies below 150 Hz to use the UNICO with an active sub-woofer such as the Schertler PUB 1/380. When the LOW CUT is engaged, UNICO delivers mid and high frequencies while the bass extension transmits the low end.

Two power amps with an active crossover produce more than 180 Watts RMS and combined with a 8″ woofer (150 Watts RMS) and a 1″ dome tweeter (35 Watts RMS) guarantee velvety and clear harmonics with a controlled and strong low end (down to 40Hz). The technology of biamplification delivers very transparent and clear sound as well as providing maximum efficiency by properly matching amplifiers to loudspeakers.

UNICO can be used in combination with many other SCHERTLER products and accessories, such as: