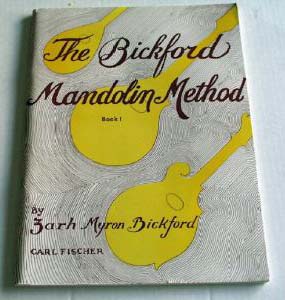 I stumbled across this book while doing research on the right hand picking styles of pre-war guitarists, banjo players, and mandolinists. I had always suspected that the Gypsy Picking technique was employed by most plectrum players before WWII. Bickford’s instruction clearly describes the same picking technique that Django and most other Gypsies use on the guitar. The use of predominately down strokes, all played as rest strokes, was the preferred technique of early 20th century mandolin virtuosos. And judging by the incredible playing of Dave Apollon, who I assumed used this same technique, its just as effective on mandolin as it is on guitar.

Although the book covers numerous topics, he consistently returns to the importance of right hand technique. Most of the examples have pick stroke indications included. He also explains numerous special picking techniques.

Bickford’s book is also an excellent way to improve all around musicianship. He takes you from the basics of reading music to some very advanced mandolin duets and solo pieces. You’ll also learn numerous scales and chords. For those of you without an accompanist, he has some very nice chord-melody solos written out.

I think mandolinists of any skill level will find this book beneficial. For mandolinists attempting to play Gypsy jazz, this is the closest thing you’ll get to Gypsy Picking for mandolin. Learning the Gypsy picking technique as described by Bickford will help you get the right tone and attack for this music.