Live at the North Sea Festival, is certainly on my “Desert Island Gypsy Jazz CD list.” The 1993 recording is significant in showing the virtuosity of the Earth Force known as Stochelo Rosenberg. He is usually assisted by his cousins; Nonnie on bass, and Nous’che on rhythm guitar. Their first CD Seresta released in 1989, introduced Stochelo and crew to the world. Live at the North Sea, further established and solidified Stochelo’s importance, and the influence of players from the “Dutch School”, exemplified by Stochelo and his cousin Jimmy Rosenberg. These proponents of the style brought much life into the Gypsy Jazz revival, and demonstrated how the genre was growing and evolving.

The Rosenbergs are part of the Sinti Gypsy community, based in the Netherlands. Some of the elements of the style are rapid-fire arpeggiated runs, and open-string/closed string syncopated ideas.[1]

Stochelo’s Live at the North Sea “Minor Swing”, solo is a tour de force, and there’s much that we can learn from it. Needless to say, the iconic piece is probably the most played song of the style, so you could say that it contains many of the elements of Gypsy Jazz. He uses some ideas from Django’s 1949 recording of Minor Swing.  Recorded in Rome with an Italian rhythm section, it features Django on an acoustic guitar. If we compare the ’49 version with his groundbreaking version recorded in 1937 with the Hot Club of France, we can see that Django was starting to experiment with Bebop ideas, and he was moving in a new direction.[2]

A word about my transcription; I tried to represent the rhythms as accurately as possible, basically as with any transcription, it is meant to act as a guide and a record of what the musician played. You should of course listen to the track to get the feel. Since it’s played in swing time, it’s a dotted 8th note-16th feel for the most part. I didn’t write out all of the funky subdivisions, [the chordal bit in the 5th chorus for example is simplified a bit]. There are times when Stochelo plays a dead string between notes, etc., and I didn’t notate them all.

About the chord progression; most of you know the progression, and good chord voicings for it. If you don’t, check out Michael Horowitz’s book Gypsy Rhythm which includes transcriptions of Django’s original chord progression as well as variations used by the Rosenbergs and other contemporary players. The progression for the solos, after the little minor triad is played is basically; 2 bars of Ami or Ami6, 2 bars of Bmi7b5, or Dmi6, [Dmi/B], 2 bars of E7, 2 bars of Ami, 2 bars of Dmi, 2 of Ami, 2 of E7, then 1 bar of Ami, followed by a bar of E7. The final bar of E7 acts as a turnaround, similar to a 12 bar blues form.

It’s a 16 bar form, Tonic minor to a iimi7b5, then V7 to tonic. Iv minor to tonic, to V7 then tonic, followed by V7.  The 2nd chord can be thought of as either the ii chord of Ami, or a Dmi6th with B in bass. Dmi and Bmi7b5 have the same basic function. It might be easier for beginners to think of the 2nd chord as a Dmi with a ‘B’ note added].

It’s amazing to see what Django and Stochelo do with such a simple progression. One device that is pretty common is to play an A7 instead of Ami for bar 8. Sometimes you will hear a soloist use the notes in an A7 or A7b9 at the point in the form, even when the other chord player is playing an Ami. Basically, it works even when only the soloist outlines the notes, [A-C#-E-G-Bb]. The most important aspect is playing the C#, since it’s the 3rd of the chord.  Stochelo and company add some harmonic variations to this simple progression, and they are worth checking out and understanding.

We can hear that in bar 9 of Stochelo’s 2nd chorus, that they play a commonly used harmonic variation on the progression. It’s a cycle of 4ths; Dmi[7] to G7 to Cma7 to Fma7 to Bmi7b5 to E7. [A common cliché, it can be found in many songs, Autumn Leaves, for example. The Dmi or Dmi7 in bar 9 [which can be thought of as the ii chord in the Key of  ‘C’ major], sets up a cycle of 4ths, resting for a bar on C major, before shifting back to Ami, thru a  ii ½ diminished   – V7 –Tonic bit. Listen to how Stochelo plays off of those chords when they use that progression. It’s a nice variation that you can use in a performance. You’ll want to be sure that your band mates are hip to it, and make eye contact with them to avoid train wrecks[!] Eventually you’ll get to the point where everyone can feel when these things are going to happen, and that helps to make it fun and interesting. 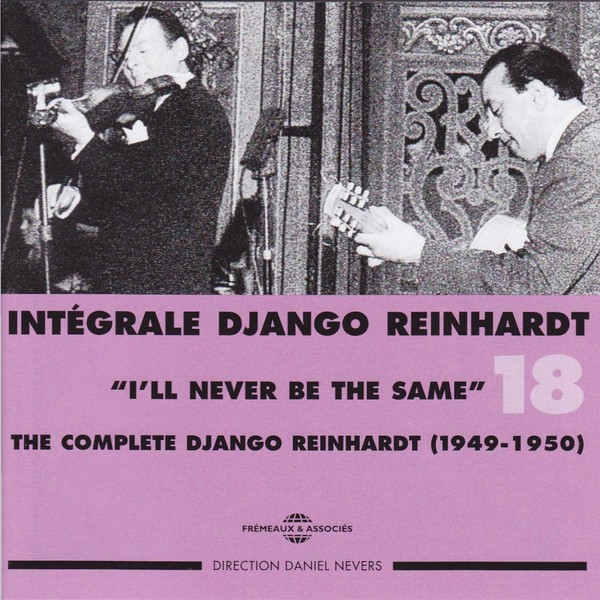 For the solo, Stochelo begins with a phrase based around ‘E’ natural, which is the V7 or Dominant chord and note of the key. The 1st few bars are based a bit on the beginning of Django’s solo from his 1949 recording. He outlines Ami and Ami6, then dmi6, and then E7b9, resting on the Ami in bars 8 & 9. Note how Stochelo draws out a phrase at times to prepare for the next change. The Ami tonic is a chord of rest, so it sort of speaks for itself in a way. The line is more active at bars 10 and 11. The line holds an ‘F’ natural over the Ami in bar 12. You can see more examples of this device, which holds a note over from a previous chord, or even anticipates the next change. He uses the bit at bars 10 & 11 again at bars 26. [BTW, it’s good to work out some of these riffs and take them apart, and learn to weave in and out of them. Everybody uses riffs or thematic material. You still need to know how to improvise, and believe me players like Stochelo certainly do, but it’s nice to have some things under your fingers to use and develop.  Moving on, an F7 is implied over the E7 in bar 22. A Bb is outlined over the E7 in bar 37. Bar 38 uses enclosure targeting the ‘E’ natural. He uses a cross-rhythm ‘false fingering’ bit in bars 45-48. It was used by sax players like Lester Young, and is common in Sinti style. [Chuck Berry uses a variation too]. Note, I may have missed a note or rhythm in that bit, it’s tricky. You can work something out based on the transcription and your ear. He uses a passing tone device in bar 63, and a cool Benson sounding blues lick in bar 44. The octave theme and chord bit in the 5th chorus are from Django’s ’49 solo.

There’s a lot to learn and appreciate here. You can see how Stochelo uses trills to make the line longer and target the 3rd of the next important chord, and you can also see how important it is to know all of your chord shapes and scale patterns.  He also develops his ideas very well, based usually on “question and answer,” concepts. This involves playing a simple theme, and then developing it and ending it in a pleasing way. Stephane Wrembel talks about this, and all good players do it, even unconsciously. Last note; I used the Amazing Slowdowner to transcribe this. The recording was a bit sharp of A’ 440. I had to lower the track about 19cents to match it. It’s also amazingly fast, I had the speed at times at 45 or 50%!

I hope that you enjoy learning the solo and working the ideas into your vocabulary.

Stochelo’s agent, Ivan told me that they will be playing in Canada at the end of May.

Please feel free to email me with questions; Barwarren@aol.com,

And please check out my blog for more cool info, and interviews with players like Stochelo; www.GypsyJazzGuitarOnline.com . Oh, and check out my band, the infamous Hot Club of Philadelphia at www.HotClubPhilly.com

[2] For example Django uses some ii-V   ideas employing upper partials, playing Bmi9 sounds over the E7 towards the end of the progression. 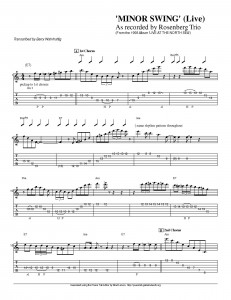