Senior Thesis Followup: What does everybody think of modern GJ?

After posting recently about asking if any Romani/Sinti/ other Gypsy players would be interested in conducting an interview regarding a senior thesis I am planning on writing, I wanted to pose a question to anybody: what do you think of "modern" players (very loose terminology, I'm mainly referring to the popular internet/ youtube figures such as Adrien Moignard, Joscho Stephan, Gonzalo Bergara, etc.)? I find myself able to enjoy the less traditional approach these players have as well as the incorporation of modern culture/ ethnic nationalities into their music, but I am curious as to whether other people see GJ as being dichotomous in this nature. When I listen to players such as Stochelo or Debarre, I hear different nuances and vocabulary than the more modern players. I think both are equally talented, but I can't help but wonder if others notice this as well? Not to say that the divergence away from a more traditional approach is even a bad thing, but I almost feel as if the rise in popularity of the genre has affected the way players approach it as well as having many influences outside of Django. Does anybody feel as if they are listening to a different or evolved version of gypsy jazz when they listen to these players? Has the genre shifted more to a timbral sound and general feel rather than focusing on the music of the original Django recordings? Thanks everybody.

(Side note: none of this will go into my thesis itself; I was merely asking to sort of guage this communities opinions on the subject to see if I am even on the right track.) 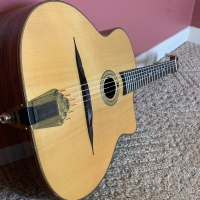