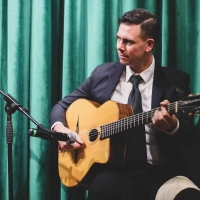 I am a French gypsy guitar player living in Shanghai for the past 15 years.

I have literally brought gypsy jazz in China, alongside with American guitarist Doug Martin.

Today, I wanted to share with you the release of my debut album "Lost&Found", entirely produced by myself at my place (composed, recorded, mixed and mastered). I have also created my own label to distribute it (Hot Wheels Records), with more original music to come.

This album is a mix of gypsy jazz and bebop, "when Django meets Charlie", and is available on all platforms - or check my website at https://etiennejeanne.com

For the Djangobooks community, here's a link for a free download of the album (mp3, valid until May 20th) : https://we.tl/t-2yChE06YT7

If you missed the free download, the album is available everywhere. Here's a Spotify link for a track with the great Ludovic BEIER on accordion : https://open.spotify.com/track/5O2Ku4XVev9ePci9YKuRjM?si=a91820d06b2e4b8a

I believe that this type of gypsy jazz is fresh, the mix being totally different than what's on the market nowadays.

Please, leave your comments if you liked it, and also if you didn't like it :p