Adrien Moignard playing through an AER? 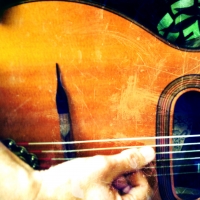 Hi guys, can anyone tell me if Adrien is playing through an AER here? It looks like it but doesn't sound like it. I didn't think AERs could get that breakup sound...

Also, has anyone had any experience with an Udo Roesner DA CAPO 75 Acoustic Amplifier? Interesting that the original AER designer is now creating his own line of amps...