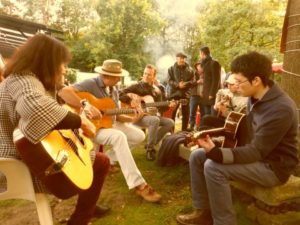 The Django Reinhardt Festival de Samois is the annual celebration to honor the legacy and memory of the guitarist/composer Django Reinhardt. As I’m sure that most of you know, Samois-Sur-Seine was where Django spent his last days. It is the most well-known of the Django festivals. It has run continuously since 1983, usually on the last week of June, Wednesday to Sunday.It wouldn’t be a stretch to say that for me and many of my fellow Djangologists that Samois-Sur-Seine is a near mythical place, a sort of Avalon of our collective hearts, where we can see Django’s final resting place, and to walk the streets that he walked, etc. It was in the Fall of 1951 that Django left Paris for Samois.  He wanted to relax away from the hub-bub of Paris, a place where he could indulge his passion for painting and he loved to fish in the Seine. [1] It was a transitional time for Django; Be-Bop was becoming popular and Django was a bit bored with the scene and he had visited Samois a few years before and fell in love with it. He moved into 5 rue du Bas-Samois with wife Naguine and young son Babik. On May 16, 1953 Reinhardt passed out and fell while having a morning cup of tea at a café called Auberge de I’Île, (Chez Fernand)[2]. He was taken to the hospital at nearby Fontainebleau. He died, having never regained consciousness. The cause was listed a cerebral hemorrhage, he was just 43 years old. 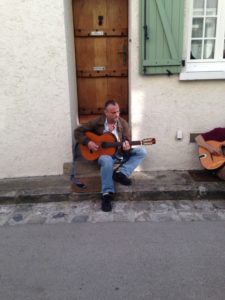 The author having a bit of a jam at Chez Django, 2014. Thanks to Andrea Carlson for lending me her guitar.