In the south of France during the 1950s and 1960s, a generation of Gitan guitarists was also playing their own brand of Django’s music, blending in Corsican and flamenco influences and recording for several small labels in southern France and Lyon. Because they were able to record during this era of the lost generation, their music became influential in keeping Django?s legacy alive and in passing on a southern Gitan style. The most influential was Etienne Patotte Bousquet. Performing at the infamous Marseille dive Au Son des Guitares, Bousquet played with such ferocity that he at times broke all six strings with one strum of his plectrum. His music was based in Django?s legacy, but also incorporated musette waltzes and Corsican melodies. He recorded a handful of EPs and LPs that kept songs such as Django?s ?Montagne Sainte-Geneviève? from being forgotten. In later years, Bousquet gave up on life as a musician and became a shoe vendor in the Midi?s flea markets. 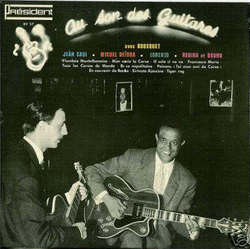 Django was from the Manouche or Sinti tribe of Gypsies. The Sinti have their roots in Eastern Europe. They have a distinct language and musical traditions. Bousquet, along with the Ferret family and many other famous Gypsy guitarists, are from the Gitan tribe. The Gitan have roots in Spain. They speak a different language then the Sinti and have Spanish influenced musical traditions. This recording of Bousquet shows the Latin side of Gitan music. Tico Tico is a popular Brazillian choro tune. 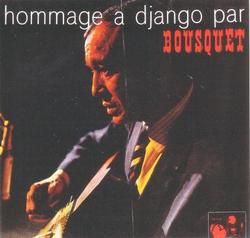