Django’s first son was Henri “Lousson” Baumgartner (1928-1992). Like Babik, Django’s second and more famous son, Lousson was an excellent guitarist. Since Lousson was older he actually played with his father on occasion and even accompanied him on numerous recordings in the 1940s. Like many of the second generation players, Lousson played more contemporary styles of jazz on an archtop electric guitar. Despite Lousson’s modern bebop approach, his Gypsy heritage is evident in his technique, repertoire, and sense of aesthetics. The following home recording of Lousson playing Django’s bebop style tune Nuits de Saint-Germain-des-Pres demonstrates his largely unsung talent. Lousson never recorded commercially. 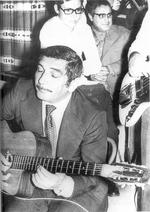 This recording made during a rehearsal sometime in the 60s. Please excuse the poor quality. There are numerous drop outs through out.