MattHenry Washington, DC✭✭✭✭
May 2014 edited May 2014 in Guitars, Strings, Picks, Amps, Pickups and Other Accessories Posts: 128
First off, here's Patrick Inghilleri's site:
http://leri-amplification.com/
Use Jean Paul's email on the /Order page for orders in North America.

My model is the ING102 which features a custom bridge pickup and a sticky stuff pickup for over the sound hole (it just looks like half a bow-tie in its current design). It's the bottom right setup shown here:

I give the Inghilleri pickup a thumbs up. In short, it is a flexible, natural mic solution that is good for anything that isn't too noisy. My detailed review is below but I lack the proper sound-nerd lingo to speak to the tonal characteristics so forgive me for mostly just talking about results in different applications. I hope to post some additional clips to give folks a sense of the real-world performance of the ING102.

The ING102 is the nicest-sounding GJ solution I've tried. I also own an AT Pro70, AT 831b, AKG C411pp, and a Schatten HFN S2. The ING102 cabling and sticky mic are annoying to deal with at gigs, but the tone and presence are the best I've experienced.

My favorite three things about the ING102:
1) It has a natural tone that is superior to the results I've been able to get with the solutions listed above.
2) It is *very* feedback resistant - like as much as a contact mic - which is super handy for me because I'm often sitting just a few feet from my amp (an Acoustic Image Coda). This is a big plus and let's me drive my amp much harder than I ever could with the AT clip-on mics.
3) The dynamics are very even and predictible switching from lead to rhythm. With my AT mics I've always had issues where I start chunking and the mic gets overdriven and tubby, so I turn it down and then lead isn't loud enough.

Issues with the ING102:
1) It's not cheap at 450eu for the version that has the sticky mic as well as the the custom bridge mic and dual-input preamp.
2) The two skinny cables are fiddly for gigging and my sound hole mic arrived with a white cable when black would have been less obtrusive. The ING102 preamp also adds clutter as another piece of gear in the signal chain, although the 5 band EQ is handy and does what it should.
3) The hardware is very dialed in to GJ needs but it's not the kind of precision engineering we're accustomed to. Patrick knows what he's doing and is putting together a fine mic solution but it's more of a done-by-hand sort of product that you never really see in the electronics space. The pre is a plastic case with an XLR out that is too tight to use. The cable for the "rose" mic is really flimsy, terminating in a 1/8" male, while the bridge mic is stiffer and terminates in a 1/4". I'd like to see the rose mic made with a removable cable in case it wears out over time. I'll send this feedback to Patrick; he seems to continually work to improve the design.

I'm definitely going to keep the ING102. I love the way it sounds and it's well worth the extra cables and sticky stuff. I'll use it for bistro gigs or stage gigs where I have a listening audience but no sound guy. I'll use it for everything that is small-to-medium in size and noise. My next purchase will be a magnetic pickup like the Peche or the Guzz series 2. I'll use the mag pickup for bar gigs, dances, and other events where I'd have to abort to an archtop to hear myself and fill the space otherwise.

Here are my recent gig experiences. I only got the ING102 three gigs ago (the fourth will be tonight):

The first gig was a posh rooftop lounge with bad acoustics and a bar crowd of people mostly not paying attention. My other guitarist on that gig had a Peche with a Baggs pre going into the deejay PA and his solos were totally present and viable. By contrast, I couldn't hear what I was playing through the ING and eventually gave up on lead, just sticking to rhythm and vocals.

The second gig was an outdoor swing dance. We were patched into a Fender Passport 250 that was distorted and overdriven. You can see two ING systems in the clip below (one for me and one for Sami) and you can tell that while the acoustic tone is nice, the lead playing doesn't have the presence or projection required for the venue.

The third gig was my usual French bistro. This place still has folks making conversation but the smaller space (a dozen tables and a small bar) and more intimate setting was a better fit for the ING102, which was hooked up to my Coda. I had more fun playing that venue than ever before because of the nice, natural sound of the Inghilleri system. The whole night I was thinking "Hats off to the ING102. This bistro is solved."

In between the second and third gigs I heard my two favorite local gypsy jazz guitarists playing at a noisy bar. Sami was using the ING and I could barely hear him. Michael was using a Peche and stood a chance at least. They were both playing through a powered EV speaker they brought with a mixer. I'll be playing that space next month and will hopefully use my archtop. Even the Peche was pretty hopeless with all that noise.

Tonight is another social dance. And then Friday is a bar/lounge at a fancy hotel (which I expect to be another good ING gig). I'll check back to this thread with updates.

One last comment: I find the "Rose" mic with the sticky stuff to sound best right under the strings in front of the bridge rather than hovering over the sound hole (I learned this after the dance gig below). YMMV, but the sticky half-bowtie mic is definitely highly position-dependent, so do some experimenting. 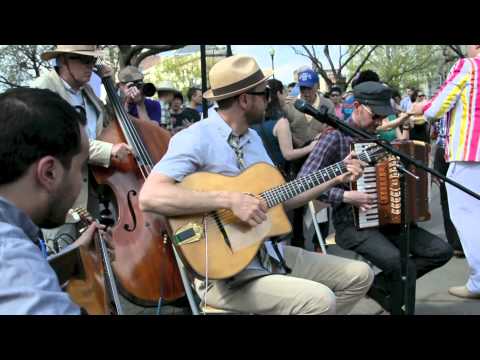 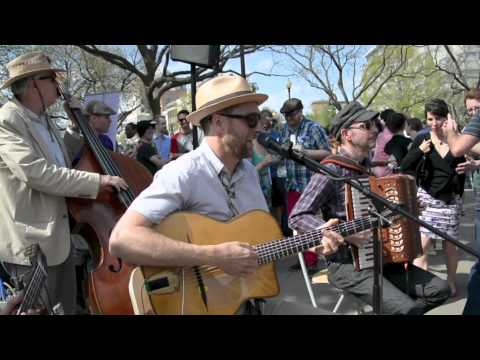