A Rare Find With a Selmer Connection (or now it seems, maybe not).

Not quite a ‘Django’ style guitar but possibly of interest here anyway, I recently acquired a metal bodied resonator guitar made in France for, and sold by, Paul Beuscher.  Then again, as Oscar Aléman and Serge Camps both played resonators maybe it is not too far out.

The traditional National resonators had only a limited appeal in France and even briefly popular Hawaiian type lap steel guitarists seem to have often used wooden bodied instruments.  However, the French had considerable colonial inks to various African countries and Beuscher also appears to have had connections to sell instruments there. Beuscher saw the metal bodied guitars as a potential seller in African countries presumably as traditional guitars made of wood did not survive long due to the extreme climate.

Thus the Beuscher company launched a metal bodied resonator guitar in 1953 which stayed in production until 1971ish with most of them going to Africa; sources claim varying production totals between 400 and 800.

As we all know Selmer had stopped making guitars by 1953, getting out of the market and selling the remaining stock of parts to another retailer strangely named Pierre Beuscher who was no relation to the aforementioned Paul Beuscher (but that is another story for another time) and it was this second Beuscher who asked Jacques Favino to make some guitars using the ex-Selmer leftovers.

So, now it seems the new Paul Beuscher resonators had their metal bodies made by……….........yep, Selmer !

Beuscher also applied a decal to the headstock with the brand SML and these also sometimes named in the catalogues as ‘Vibraphonic’ guitars.

From what I have found through contacts in France there are few survivors known.

This one has some minor damages to be restored and the nickel plating shows wear but it is complete and structurally sound. The back of the headstock has the impressed mark of David Enesa who died in 1957, so even allowing for a possible delay using up existing stocks this dates it as one of the early ones.  Some had Bilardi tuners with the normal SB markings and some were fitted with similar tuners but with plain (unmarked) covers as is this example; I was told by one French source these were also made by Selmer; I am still investigating that but as one has a broken shaft needing repair I will take detailed photos once it is dismantled.

From what I have found through contacts in France there are few survivors known.

and I have already been in contact with Marc Sabatier to keep him informed of progress.

If anyone has any more info on these I would be pleased to hear it. 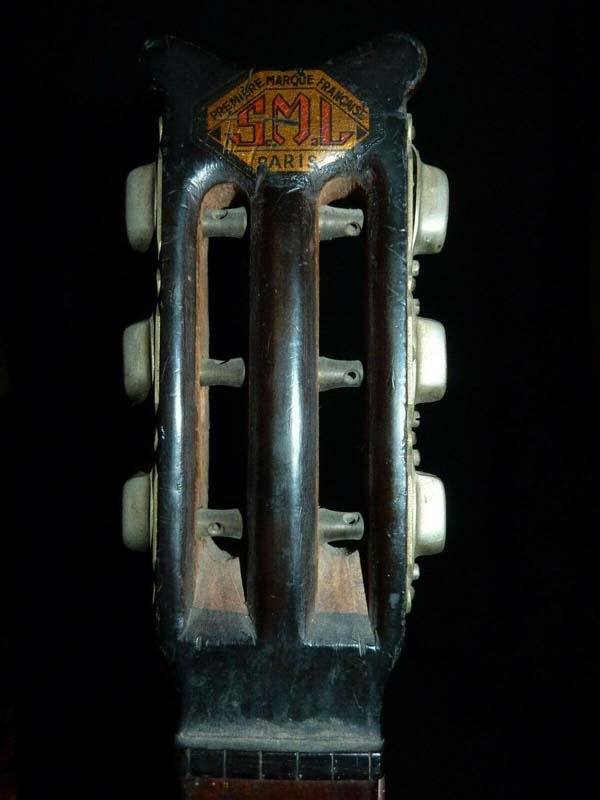 I will take some better photos showing more detail this week.