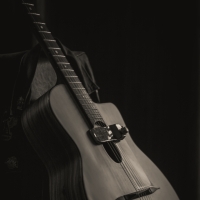 I'm sure all of you are familiar with the intro that is usually played for "La Gitane" nowadays and kind of became part of the song. For example:

On the famous 1960 version of the original by Tchan Tchou Vidal however this intro is completly absent:

On this live version from 1989 he plays something very similar as intro: https://www.djangobooks.com/archives/tchan_tchou_la_gitane.mp3

The earliest recorded occurance of it I know of however is not in a "La Gitane" version, but in "Valse á Schnuckenack" from 1970:

Now my question to the historian experts at djangobooks:

Do you know the origins of that intro? Was Tchan Tchou Vidal paying homage to Häns’che Weiss when using a similar intro in the 1989 version? Or did Angelo Debarre hear Tchan Tchou playing a similar intro and went on to pay homage to Häns’che Weiss by using his intro instead? Can it even be attributed to someone specific or is it more of a "traditional intro you can use for any song you like"- thing? In the DC music school course of Tchavolo Schmitt in one episode he shows some intros he likes to use and they do not seem to be attached to a specific song, so is this the traditional way of doing it in the style with a "pool" of traditional intros one uses just how he feels for whatever song?