The Return Of The Mystery 'Sonora' Tailpiece

I recently picked up a fairly ordinary looking parlor size guitar with the label identifying it as by Luigi Genovesi of Catania Sicily. Not much info out there, he seems to have been most active in the 1920s and '30s. Was he still making guitars in the 1950s? Certain clues would seem to suggest so, the tailpiece for one.

It was cheap enough for a fun restoration project but I bought it as much for the tailpiece as any other ideas of finding a great guitar.

But when I removed it I found the three screw holes were the only holes there, meaning it had probably been on there from new, I had been thinking it had been added somewhere along the years as parts often do get swapped around but no, the evidence is that it is original to the guitar.

So why such an elaborate tailpiece on an otherwise plain guitar, although I may be selling it short there, the scratchplate is missing and it may have been highly decorated which would have enhanced the appearance somewhat, and maybe Genovesi guitars were not the cheapest in town.

All speculation of course.

So what is this tailpiece and who made them?

Cast in aluminium (or aluminum as Americans call it) with the distinctive treble clef motif in the centre, other similar ones have been seen without the clef, just an open triangle shape, or were these just maybe the same thing where the middle had broken away?. One would think to cast these would have been more work - and expense - than the more common stamped parts.

First we have the Sonora connection: These tailpieces have often been seen on Sonora branded guitars and there has been much discussion about these on this forum in the past. Sonora was not a manufacturer, just a retail brand. Speculation suggests that some were made by Busato but that may have been just wishful thinking to try to boost their value, although certain traits of the round hole model as made famous by Hono Winterstein seem to fit. Certainly, as I had posted in the past it is possible and by the mid-fifties Pierre Fontaine had been sub-contracted to make the more basic guitars for Busato so maybe that is a connection. Others had suggested they came from Carmelo Catania or Jacobacci.

Then there are the mysterious 'Jose Sanchez' guitars one of which possibly also had the same tailpiece. Sanchez appears to have been a fictitious Spanish luthier whose brand was attached to guitars sold by Gaillard et Loiselet a musical instrument manufacturer/wholesaler and retailer based at 273 Cours Lafayette, Lyon with shops in that city and possibly others. They are best known for drums and brass instruments but bought guitars in from other manufacturers. Certainly they bought many from Jacobacci.

So now we have a guitar from another of the Sicilian luthiers in Catania, Luigi Genovesi with a distinctive tailpiece apparently as an original fitting.

I had thought I could sell this on to someone who may want to restore a more typically 'manouche' style Sonora, (offers over $100 anyone?) but then again I may just restore the Genovesi and see how the finished guitar looks then. 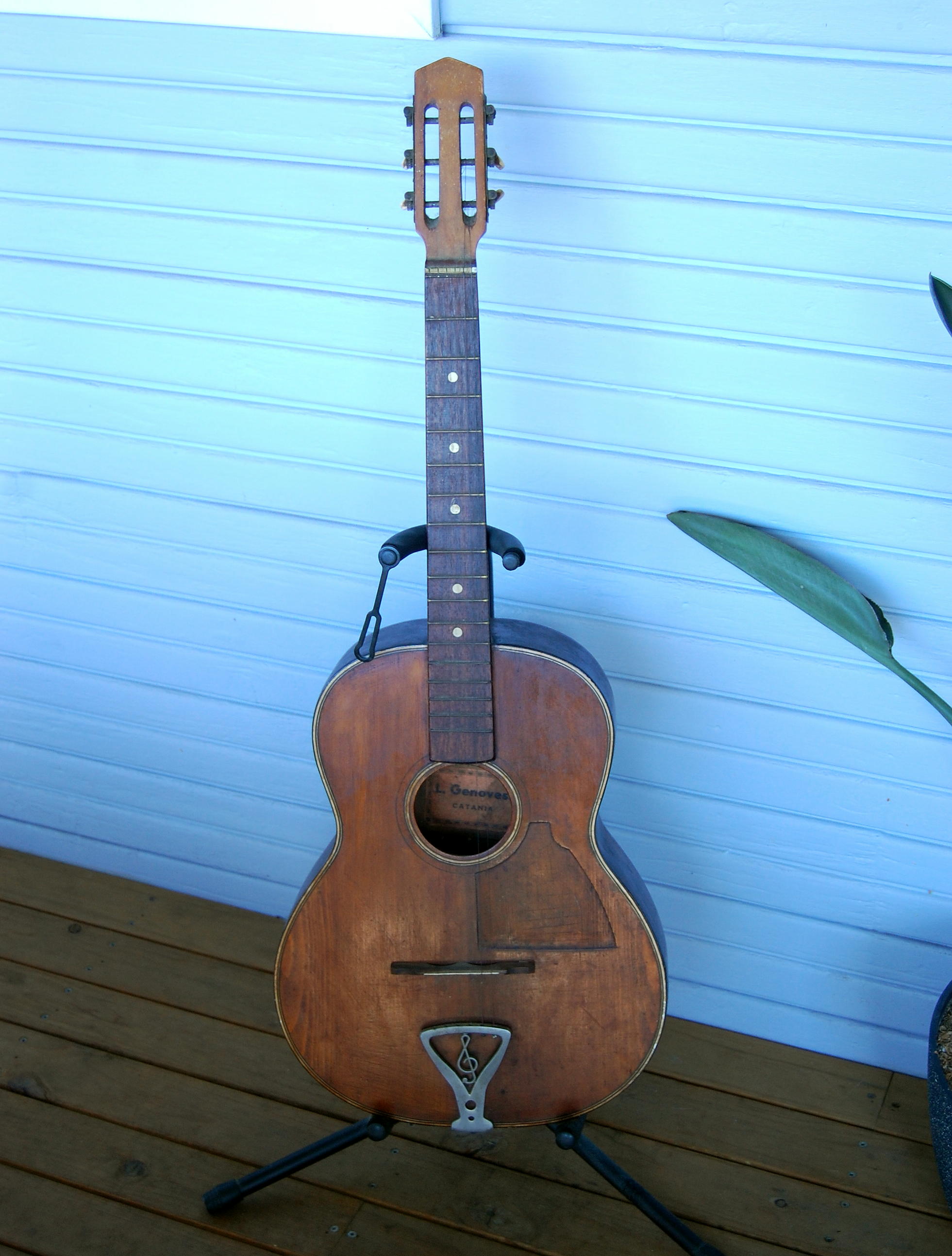 The Genovesi as bought. 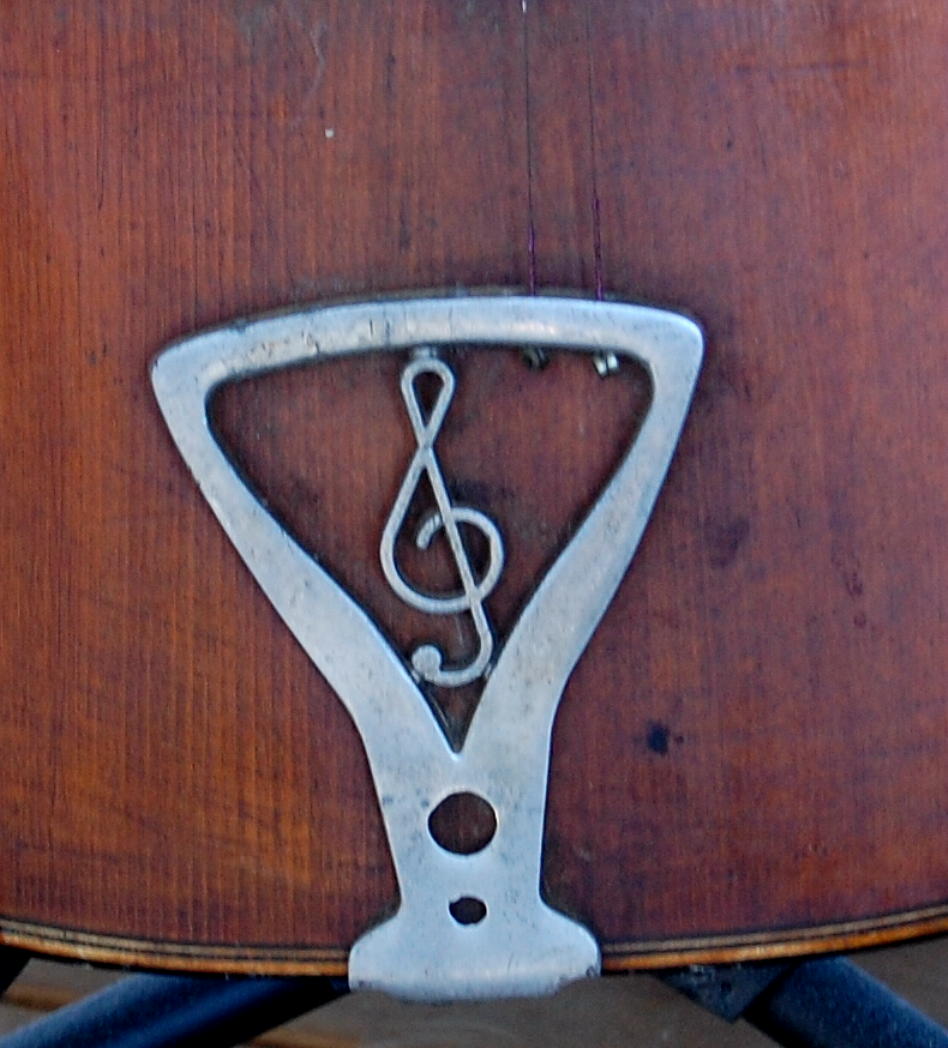 Close up of the tailpiece. 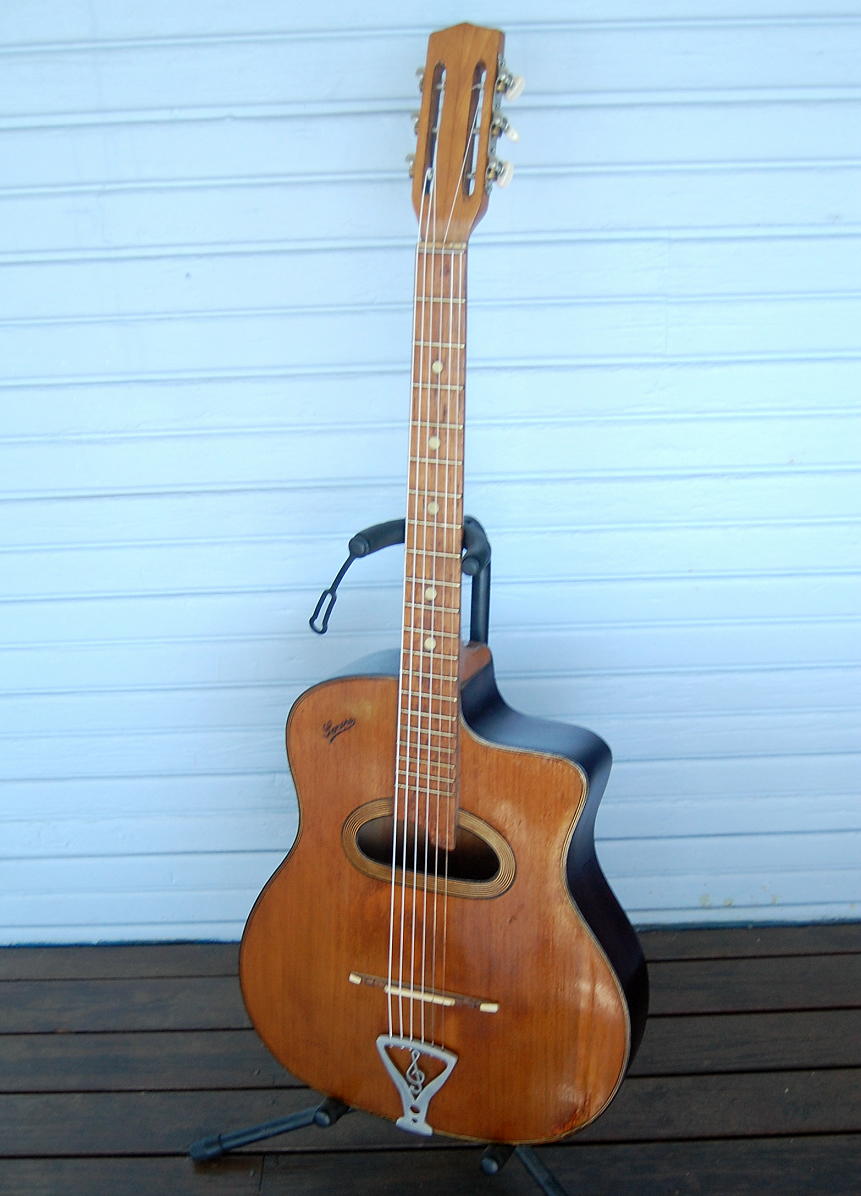 And a more common model by Sonora. 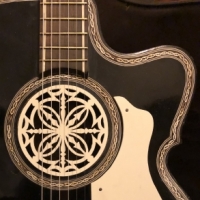