Thoughts On Becoming A Better Gypsy Jazz Guitarist – Part I

It’s fair to say that most of us are constantly working at becoming better players. We think about the subject often, and it may be a bit of an obsession at times. I’m going to cover some general and specific ideas that I hope will be helpful to players at all levels.

One of the most important skills is the ability to hear what is being played and to react to it in real time. The best players can understand what they are hearing at a deep intuitive level, including harmonic variations, etc. These variations, chord substitutions, etc. are happening in real time, and our goal is to be able to hear and react intuitively.

Knowing common chord substitutions and how and play over them is important. It is also essential that players know common jazz & Gypsy Jazz harmonic clichés and how to use them. (More in this in part II).

In my travels I hear players that range from beginners-intermediate to the top Jazz and Gypsy Jazz performers.  One key aspect that separates the higher level players from lower-level ones is their phrasing and the organization of their ideas. The best way to learn to play more compelling solos is by studying and deconstructing their work.

Let’s begin by examining one of the key principles found in solos of  the master players like Django, etc. which is called ‘Question and Answer’, the use of motif and response. It’s one of the key elements of Western music, an underlying principle or technique found in classical, pop, jazz etc.
We can define it as an opening statement or motif, followed by an answer. [tension-resolution].
ex. 1. Invention 13, from the Bach two-part inventions; 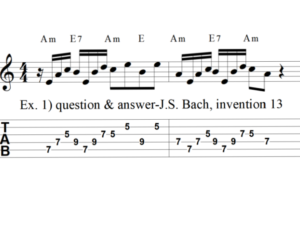 Ex. 2. ‘Blue Bossa,’ by Kenny Dorham. [The melody is usually played an octave up]. You could analyze the phrase as a two-bar question & answer followed by another two bar Q & A. My friend and former teacher Stephan Wrembel talks about this technique in his lessons and his book; ‘Getting Into Gypsy Jazz, ’  [1]   Using this technique, and learning to think in this way will go a long way towards helping you to organize your ideas. Your solos will make more sense and will be more engaging to the listeners. You can hear Q & A quite a bit when listening to the top players.

Working on this will be very helpful for you. Many players tend to play that way naturally. Working on utilizing this concept will help you to avoid a common stumbling block for aspiring G.J. players, namely playing way more notes than are needed. Leaving space will help your phrasing. Players like Bireli and Stochelo etc. have amazing technique and can execute double or triple time ideas with ease. It’s very exciting to hear, but they always make musical sense.

The great players use speed at the service of musicality. The better soloists can get into the groove set up by the other players and ‘tell a story’. In case you haven’t figured this out yet, NOBODY cares how fast you can play, or how many cool licks you know!  😉   To begin to ingrain the technique start by listening for examples of it in recordings and in compositions.  You should also write out some solos using the concept. Note; the device is often used in a 1-2-3 formula, [like a 12-bar blues structure, where the opening motif is repeated higher or lower and/or varied a bit, then resolved].

Using ‘Q & A,’ will go a long way towards helping us to tap into our unconscious/creative mind. It’ll help us find balance in our solos and to sound more coherent with less effort.

We can learn a lot about playing musically, use of Q & A, and other important concepts by checking out Paulus Schafer’s version of   Ninine Garcia’s standard ‘Paquito.’ I included my transcription of his melodic statement because it’s a bit different from published versions and it also shows Schafer’s style. 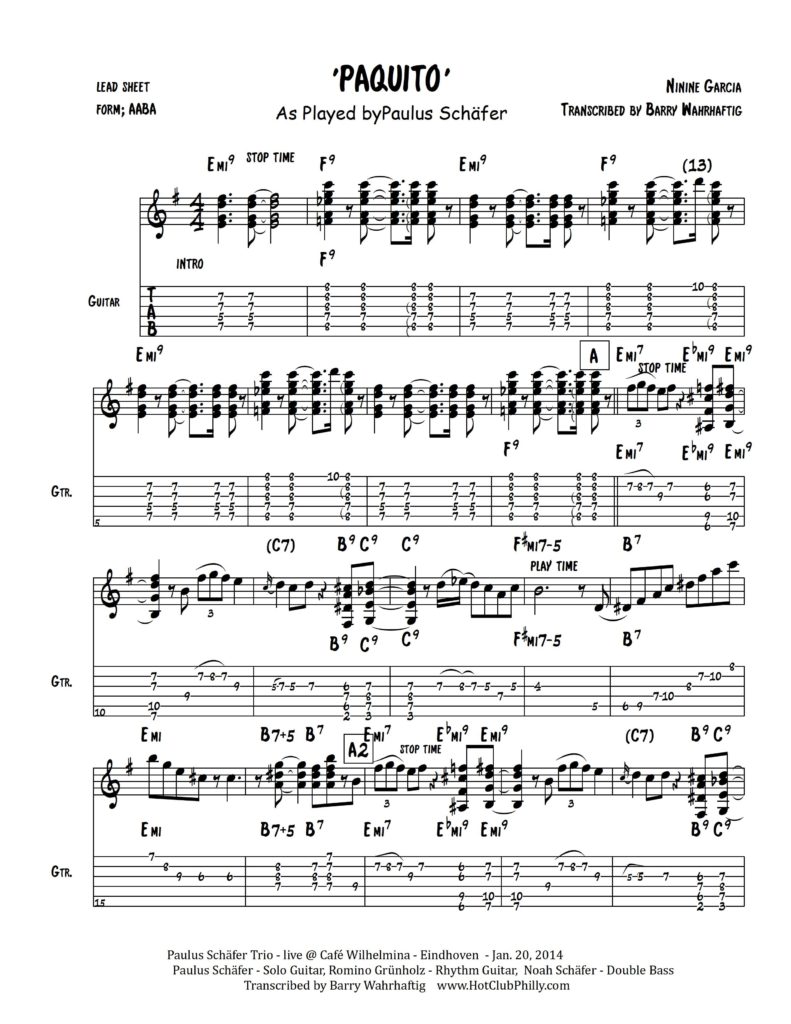 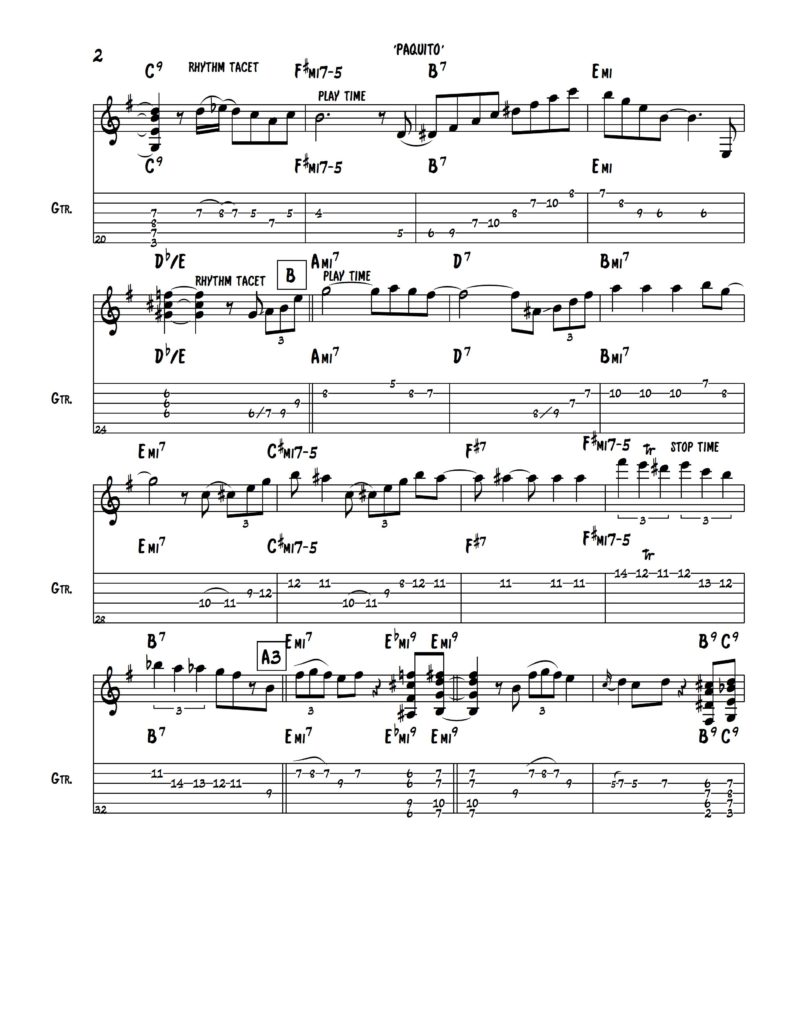 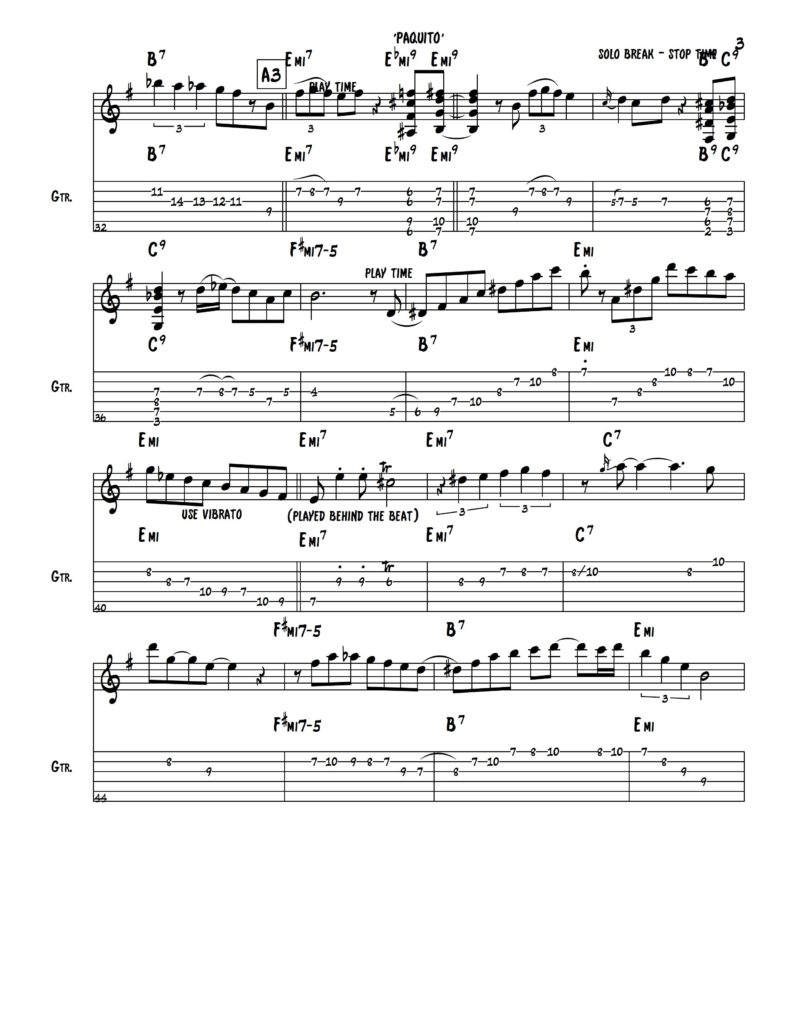 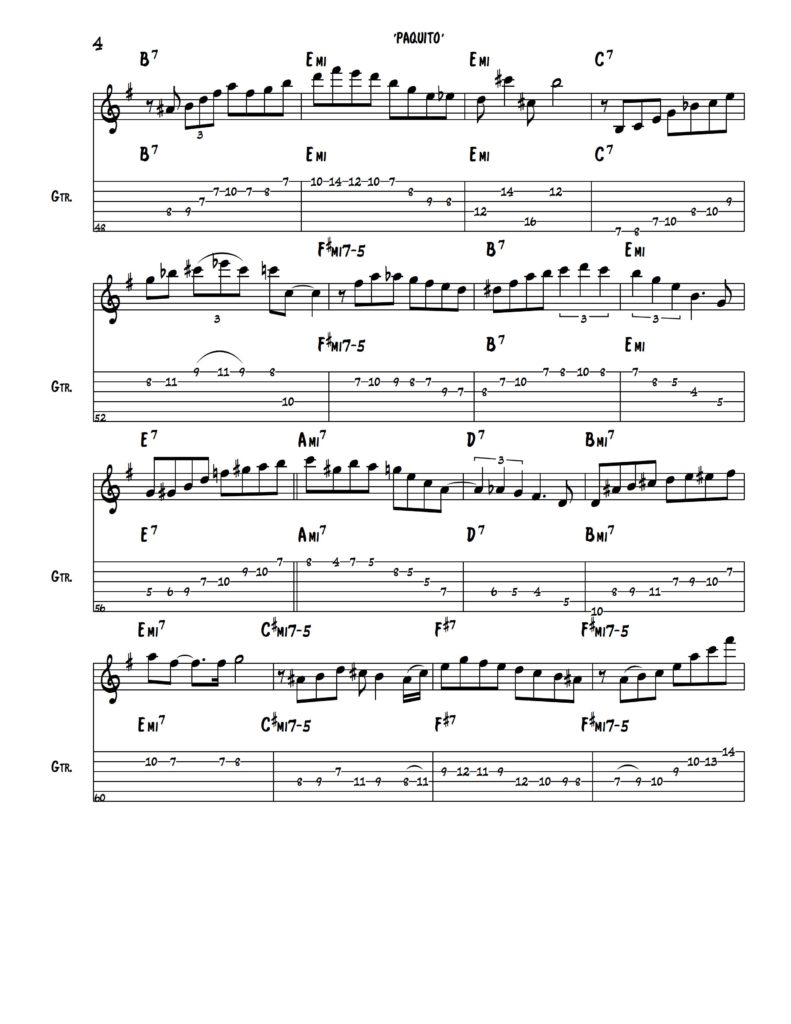 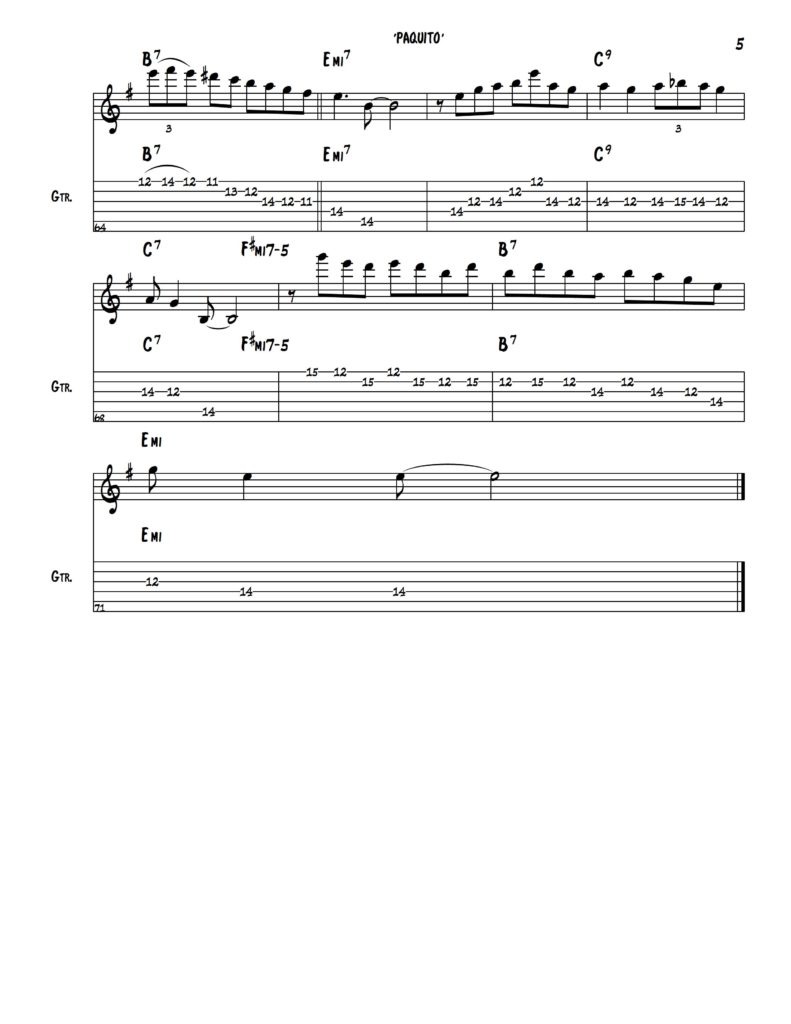 The eight-bar theme is played twice, [the form is typical A-A-B-A]. The bridge section is set up by an E7#11 in bar 24, beginning with a pickup Ami7 arpeggio, using an 8th note triplet, starting on a G# [lower neighbor of ‘A’ natural], typical be-bop, swing riff. Ending on an F#, the 3rd of the D7 chord, in bar 26.
Bar 27-28 is very much like the preceding two bar phrase played up a whole step. It’s a Bmi7 arpeggio preceded again by the lower neighbor [A#] of the root ‘B’ natural, starting on the up-beat of 3 in bar 27. Once again played as a pick-up, [anticipating the Bmi chord before it is played]. It ends on the ‘G’ natural, which is the 3rd of the Emi7 chord.

In bars 28-30, Paulus then plays the riff up another whole step, this time with a slight change; outlining a C#mi7b5 chord, again as a pick up, starting on the lower neighbor of the root, ‘C’ natural. Here Paulus plays the idea twice, each time resolving the 7th of the C#mi7-5, [‘B’ natural], to the 3rd of F#7, [A#]. Schafer closes out the bridge with a nice quarter note triplet figure in bars 31-32, using a Gypsy Dominant scale, [a mode built on the 5th degree of an ‘E’ Harmonic minor scale; B-C-D#-E-F#-G-A-B], using Bb & Ab passing tones ending on F#. he ‘B’ nat. on upbeat of 4 is a pick up to the restatement of the main 8 bar theme, last A section.

In bars 45-46 Paulus uses part of an F# Locrian mode with Ab as a passing tone, ending on E natural-D on the last beat of the bar to the 3rd of the B7 chord, [D#], in bar 46. He is using what is called ‘enclosure’, here the E-D are the higher and lower neighbors of the D# in the next bar. F#mi7-5, [or F# half diminished], to B7 is a ii-V7 cadence in the key of E minor, which is the tonality of the piece. P. outlines a B7 chord and adds the # and flat 9, [D & C natural], on the third and fourth beats of bar 46, ending on an Emi arpeggio, played backwards starting on B natural, and ending on a lower B nat.

P. plays a fill in measure 48 based on Bmi using ‘A’ natural as a lower neighbor-pick up into an 8th note triplet. [Very much like what he uses in the bridge for the melodic statement]. [D# instead of D natural would fit the chord better, not sure if it’s an error or if P. just likes the sound, but it works fine and leads well into the next idea].

In meas. 49 P. plays an idea that we might hear a post-bop sax player use, outlining E minor 9, then using Eb as a passing tone as the line continues down in ½ steps to a D natural and then C# in bar 50 on the 4th string, then leaping up to a higher C#, finally resolving to B natural, the 5th of Emi7. Bar 50 and the 4th beat of 49 is a typical G.J. idea, played by Django and everyone who followed. It’s worth noting that it works for an A7 chord just as well.

Schafer then uses an E blues scale for bars 65-71, staying in the 12th position. I’d say that B natural in bar 69 is harmonic generalization again, [as is using the blues scale over the progression], or it could be an error, it doesn’t really matter. Normally that note would be used as a passing tone or lower neighbor but a player at the level of Schafer can do whatever he wants[!] You can of course change it to a ‘C’ or Bb if you’d like.

That ends Schafer’s 1st chorus. Here’s the link to see and hear the YouTube video; https://www.youtube.com/watch?v=dlFbQ4rniU4

I hope that my transcription and analysis of Schafer’s solo and melodic statement on ‘Paquito’ is helpful to you all. If you have questions or comments I can be reached at HotClubPhilly@gmail.com
Barry is the leader of the Hot Club of Philadelphia. He can be reached thru the email above for bookings, workshops, and lessons.                    Please visit their Facebook page and give it a ‘like,’ https://www.facebook.com/HCPhilly/  The band’s web site is www.HotClubPhilly.com