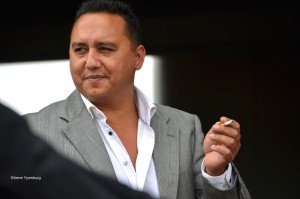 Paulus Schäfer, born March 31, 1978, is based in the Gerwen/ Nunen area of the Netherlands. Paulus is one of the top young Gypsy talents in The Netherlands. He grew up in the same camp as Stochelo Rosenberg, Jimmy Rosenberg, and the legendary Waso Grunholz.

B. At what age did you begin to play the guitar? Also, I read that you learned from the legendary Wasso Grünholz, and his nephew Stochelo Rosenberg. Can you talk a little bit about that?

P.  I was five years old when I started playing the guitar. Stochelo Rosenberg lived at the same camp as me, and he is ten years older than me. We grew up together. Nobody was ever really teaching anybody else. Of course, I learned a lot from him, but he never taught me, [in a formal way].   Wasso was older, Stochelo learned a lot from him, but in the same way. You just played along and now and then they told you to do things slightly different, and that’s how you learned. Of course, when I was little I also asked Wasso Grünholz every now and then how to play something, but nine times out of ten I already had learned it myself and he just helped me improve it a little bit.
In such cases it was about a few notes that I did wrong. He showed me a few times and then I heard the difference. That went on until I was thirteen years old and then he told me ‘Now you need to develop your own style’.

B.  I have heard that many players and teachers of Gypsy Jazz advocate mastering the art of playing rhythm before learning to solo. What would you say to that?

P. If people want to learn guitar from scratch, then usually you start by learning a few chords. Just that is the most practical thing to do. Not so much having to do with tradition.

B.   Do you think that is the best way, rhythm before lead, and why?

P.  For me it was like this: I first learned chords and then I learned the rhythm. I mastered that, I had already tried to improvise and I it turned out that I had a knack for that as well. When you are a little boy you don’t start [your], schooling right away. That’s the way it went in my life, but that can be different for everyone. It is best to first learn chords and [get a good] feel for rhythm, and then start to learn to solo. If you get the hang of it and you love to do it, then your solo playing will sound ten times better.

B. You played for a while in the famous ‘Gipsy Kids’ group after Jimmy Rosenberg left. What was that like?

P. I grew up with Jimmy. He formed the band The Gypsy Kids. When he left that band, I started playing with them, for me it was a truly wonderful time. We were all still teenagers.

B. Do you think that it is important to work out a lot of things ahead of time, as both a way to study, and for parts of solos?

P. When you are playing a new tune, it is important to study it; you really have to know the song well. I often study a small solo beforehand, but once I’m on stage there is no telling what I will be playing, I improvise most of the time.

B.  What performers do you like to listen to yourself?

P. I love to listen to George Benson, Birelli, Eric Clapton and a few other top players, and obviously to Django. 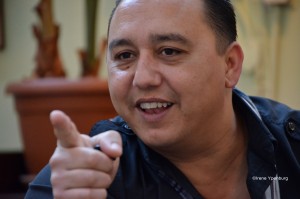 B. I know that you have done projects with players like Tim Kliphuis and Olli Soikkeli, who are also friends of mine. Can you talk a little bit about those projects?

P. Tim and I recorded the CD ‘Rock Django.’  We picked songs that we thought Django might play if he were alive. Then we performed them in gypsy style. It is a very successful CD.
With Olli I performed everywhere, we don’t really have a new project now, but the two of us are so super attuned everything goes almost without saying. We recorded a CD in one day in the studio, which has already sold out. In September of this year we will record a new CD. We understand each other so well it just goes very smoothly. I grew up among the best guitarists, but Olli was born in Finland, he learned mainly from YouTube videos. I have enormous respect for him, and how he has become such a tremendous musician.

B. What is your current project?

P. Right now I am recording a new CD with 14 original compositions. It is a tribute to Vincent van Gogh.

B. Cool, I will be looking forward to hearing that!

B. What guitars do you use,   and what type of strings and picks, pickup or microphone etc.?

P.  I play an AJL guitar, use a Rhoads plectrum, and a Fishman amplifier.

B. What advice can you give to guitarists that are learning the style?

P. If you want to learn gypsy jazz guitar playing as soloist or accompanist, you must practice a lot. You should listen to Django a lot, and make the strings to sound clear and play with feeling!

B. Thanks you for your time, see you at Samois next year, if not sooner!

This is pretty typical for Gypsies. Tchavolo Schmitt told me that the idea of going somewhere outside the home to study music was quite strange to most Gypsies. He said they were bathed or immersed in music from day one. Wasso Grünholz was a huge influence on many of the Sinti players of the Netherlands, who are many of the top players of Gypsy Jazz.

Note;  Because the questions and answers for the interview were translated from English to Dutch and vice versa, I tried to make slight changes to Paulus’ answers in a way that would preserve and clarify what he was saying, as best as minimally as possible..

Barry Wahrhaftig is the founder and lead guitarist for the Hot Club of Philadelphia Their new release ‘Gypsy Routes,’ features guest spots by Titi Bamberger, Howard Alden, vocalist Phyllis Chapell, and Philly sax great Larry McKenna, and others. It is available it the usual formats from Cd Baby, Amazon, etc.http://www.cdbaby.com/cd/thehotclubofphiladelphia and also can be purchased directly from the band’s website; www.HotClubPhilly.com Check out their Facebook page here; www.facebook.com/HCPhilly?ref=hl

Major thanks to Irene Ypenburg for her help with translation. Irene is a Gypsy Jazz guitarist, and her caravan is a fixture at Samoreau each year. And she is also an amazing artist; she did the painting that we used for the cover of ‘Gypsy Routes.’  Her website is; http://www.ireneypenburg.com/ Paulus’ website is http://paulusschafer.com/