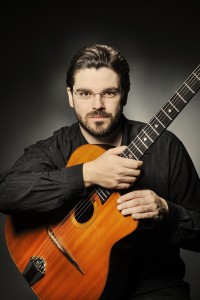 In a perfect world every school kid would know who Django Reinhardt is. Gypsy Jazz, instead of being a sub-genre of a sub-genre, would be as popular as Top-40 artists like Adele. [If you say mention Django to the average Millennial, they will think you are referring to the Tarantino movie ‘Django Unchained’.] Of course we live in an imperfect world, dominated by Pop-Culture, mass market sensibilities. But the true aficionados always seek out the path less taken. So Gypsy Jazz fans, know that Joscho Stephan is ‘sui generis’, in a class by himself. The 37 year old guitarist from Germany can count G.J. Guitar Gods like Tommy Emmanuel, Martin Taylor, Bireli and Stochelo as his fans. His praises have been sung by Jazz giants like Paquito D’Rivera and James Carter. Robin Nolan said “Joscho Stephan is a true rising star of Gypsy Jazz and one of the most ferocious players on the scene.” He has the chops of seminal players like Chet Atkins, and he has taken Django’s original sound and infused it with his own personal style. He can go from burning up a song like ‘Sweet Georgia Brown’ or ‘Django’s Tiger,’ to a lyrical take on a Beatles classic like ‘Something.’ He has astounding technique, along with a wonderful sense of melody, and lots of soul. If you aren’t one of his ardent fans yet, one listen should do the trick! [Barry]. You are from Mönchengladbach Germany, [where you still live], and you were born in 1979? [Joscho]. That’s correct. I am still living there, and it’s not far away from Cologne or Dusseldorf. B. How did you get started on the guitar? J. At the age of 6 I started to play guitar. My father showed me some basic chords. Mostly Beatles stuff, (I am still a big Beatles fan). Then he went with me to the local music school, because he wanted to help me to get a good [musical], education. The lessons were in the style of Classical Guitar, [and to be honest that was not really my idea of what I wanted], but anyway I had classical guitar lessons until I was 12 years old. B. And you discovered Django Reinhardt at age 14? J. That’s true. After my classical lessons, I started to play rock music (Santana, Gary Moore etc.), and found out that these players improvised their solos (because the live recordings were different then their studio work), so I got more interested in improvised music. At the same time I discovered people like George Benson and Wes Montgomery. Then I found a cassette mix tape, at my Uncle’s house that had mostly Pop Music (Earth Wind & Fire, Chris Rea etc.), but suddenly I heard the Intro of ‘Minor Swing,’ and was blown away. B. How were you able to learn the picking techniques and other aspects of Gypsy Jazz? Gypsy Players like Samson Schmitt learned by watching their relatives and players in their community, [not in formal training of course]. J. Even though I have some Gypsy Roots, (my grandfather was a Hungarian Roma), I didn’t had the chance to learn this Style from my father or other family members, because they never played Gypsy Swing. So I started to listen to Django´s Records, and tried to find every Video that was available at that time (1994) I found ‘Django’s Legacy’, and a Bireli Lagrene Video (together with Babik Reinhardt  in a small café), and also a documentary about the Rosenberg Trio on German television. So seeing these Videos helped me a lot in learning the technique. B. That’s pretty amazing, that you could figure out the right hand picking from seeing videos of performances.  B. Your debut 2000 recording ‘Swinging Strings,’ made quite a stir. It was named CD of the month by Guitar Player Magazine, and you were just 20 years old when you recorded it. That’s quite an accomplishment. J. I think the funny thing back then was that I always wanted to play and sound like the other players, but the success of the album was due in large part because I sounded so different. As soon as I noticed that, I changed my mind and tried to sound more like Joscho Stephan, and I think this was the best result of that album. B. Quite amazing in sound, concept and technique. Built on Django’s 30’s & 40’s QHCF style, but clearly your own take on it. And with perhaps a bit of Les Paul’s retro style along the way. J. It’s funny, a German magazine wrote the same (that you can hear the Les Paul Influence), but to be honest: I never really listened to Les Paul before I recorded that album, but I think the description is not bad. B. Hmm, interesting. I guess ‘great minds think alike,’ as the saying goes[!] [I think I hear a bit Of Les and also Chet Atkins in your approach and choice of songs.Your version of ‘The World Is Waiting for the Sunrise,’ is brilliant. Of course pieces like ‘Bye Bye Blues were associated with Paul, of course, but they came later in your recordings]. You appeared at Lincoln Center in 2005, at the ‘Django All-Stars,’ show, the series organized by my friends Pat Phillips and the late Ettore Stratta. Dorado and Samson Schmitt, Florin Niculescu violin, played and you were with your trio, which included your Dad Gunter on rhythm guitar.  I was in the audience, and I can say that you really tore the place up! J. My first appearance in the US was already in 2002. I played in Nashville at the Chet Atkins Convention (that was a huge success), and then in 2003 at the Birdland Django Festival in New York. But I remember also the Lincoln Center gig; it was a great line up that night. 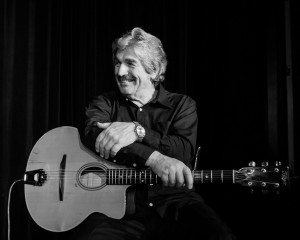 B. I think that it’s fair to say that probably stole the show a bit, not easy to do with that line-up! Also, I was amazed to see your Dad playing such great rhythm guitar with his thumb on metal strings! J. It took me also some time to understand that my father sounds unique on rhythm guitar because of his technique. I think we got a warmer sound because he is playing with his thumb. To be honest: I think my father is an underrated rhythm guitar player. I played with a lot of great players, but I never feel that safe with other players, because my father and I have played together more than 20 years. B. I agree, he sounded great, and you both really ‘locked it in.’ So let’s talk a bit about your new recording ‘Guitar Heroes.’ Great concept, BTW. I grew up on Hendrix and the Beatles, so it was cool to hear you do songs like ‘Hey Joe,’ and ‘Something,’ in addition to more traditional Gypsy Jazz pieces. The CD is in heavy rotation in my car’s CD player! J. Thank you very much for your kind words. I think the CD “Guitar Heroes” is still a dream that came true. It´s not just the guest list, it’s the result. If you plan a record with guests and a concept (famous guitar Tunes), it can be hard to realize all the ideas. If I listen to this record now I always have the same thoughts: “I wouldn’t change a single note or song on this album”, so I think that this is the best thing that can happen to a musician. B. You’re welcome. Very interesting points. It’s not so easy to capture the magic of playing live in front of an audience, especially for Jazz. The CD has a very honest and organic feel, and again, it sounds like you all had great fun doing it! Can you talk a little about how having heavy-weights like Bireli, Stochelo and Tommy Emmanuel there with you?