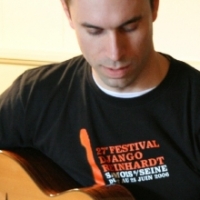 djangology Portland, OregonModerator
January 2005 edited October 2005 in Guitars, Strings, Picks, Amps, Pickups and Other Accessories Posts: 1,000
Me and 2 friends here in Portland got together last weekend to compare two distinct but similar pickup configurations. The first is my well worn and well used Schertler plugged into a Crate Taxi amp. The second is a homemade saran-wrapped Radio Shack pickup plugged into the exact same input with the exact same levels.

The result is that both pickups were generally equal volume but needing slightly different EQ setup. The Schertler tended to be a warmer sound. The difference in sound was large but both pickups did tend to give a nice acoustic sound to them.

It seems to be that having both setups could serve a purpose when you need a certain pickup in certain situations. I want to still experiment with playing rhythm with the homemade pickup for a whole gig and see what the differences are.
Share on FacebookShare on Twitter
«1234»