diracattack New
December 2011 edited December 2011 in Licks and Patterns Posts: 2
Hi everyone, first time posting here. After a few years flirting with learning this style of guitar playing, I've finally bit the bullet and picked up a Gitane d500, a Wegen Pick, and a copy of Gypsy Picking.

Aside from slowly working through basic exercises, I wanted a study piece to aspire to, so I chose something I can already play reasonably well (i.e. hit most of the notes at tempo) using alternate picking: the melody and first solo break chorus of the well-known Joscho Stephan youtube version of Django's Tiger: [url= 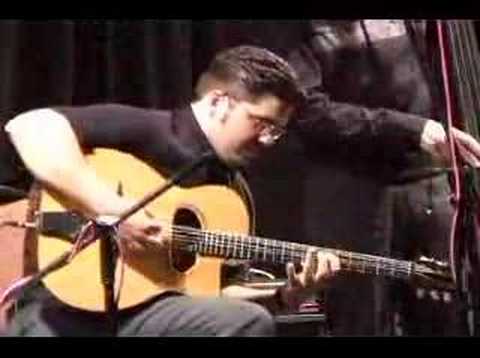 I've already noticed a couple licks in this tune that seem like they'd be almost impossible with "strict" gypsy picking, so I hoped I could post them here and maybe someone would have some insights (apologies in advance if either of these has already been thoroughly discussed in the past).

First, a lick that comes up in various forms/keys and is apparently quite common (there used to be a video on youtube of Joscho teaching the lick himself and discussing the picking; unfortunately it seems to be gone now and I never wrote it down):

I understand it's a pretty standard lick to use over an Am6, but is there a "correct" way to pick it? I find it problematic to get to the last 4 notes on the D string (which are played a bit quicker than the first part of the lick); it sounds like they definitely need to start with a downstroke, but then it's very awkward to also play the C on the G string as a downstroke. Does Joscho (or do other players) make an exception here and play the C using an upstroke?

When I've alternate picked this tune, I've played this part with a pull-off from the high note on the E string, then an up stroke on the B string, then a downstroke sweep on G->B->E, then an upstroke for the next high note. Anyone happen to know how Joscho does it, or if there's a better "gypsy" way? It seems like it'd be impossible to gain enough speed without using the upstroke on the B when descending...

Thanks in advance; I look forward to learning more and hopefully contributing something to the forum!