CDs by Gypsies and other European Gypsy jazz artists.

This all-time classic Gypsy bootleg has finally been officially released! Includes many new tracks as well remastered versions of the originals.

When giants meet, legends are born!

Double CD collection of the classic recordings by one of the great masters of the style!

A musical and physical journey through the life and music of Django Reinhardt!

One of Romane's most outstanding recordings, featuring the driving rhythm section of Fanto and Yayo Reinhardt!

A protege of Tchavolo Schmitt steps out on his own with this brilliant debut recording!

2 CD collection of Rodolphe Raffalli's interpretations of the music of George Brassens.

All in the family jam with France's best!

Romane Roots and Groove Live at the Sunset CD

Original compositions by Romane done in a hybrid Gypsy/modern style!

Debut release from one of France's best Gypsy jazz guitarists! Includes a 54 page book of Sebastien's paintings, poems, and writings.

Debut release from one of France's best Gypsy jazz guitarists!

The Strong and Silent Types - Playing Hard to Get

Classic recoding from one of France's best loved Gypsy bands!

Features the hit song from Woody Allen's "Midnight in Paris" 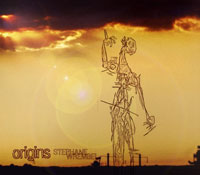 Composer of the hit "Bistro Fada" pays tribute to his roots.

Colin Cosimini Just a Gigolo
$18.00
Out Of Stock

Philippe Nedjar Shadow of Your Smile

Philippe Nedjar Shadow of Your Smile