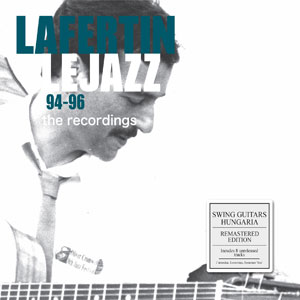 The venue was the Concorde Club in Eastleigh near Southampton, recently celebrating its 50th anniversary as a jazz club. The date was 5th October 1987. The hosts were a newly-formed, unknown Hot Club style quartet from the west of England called Quartet Le Jazz. The specially invited guest was the celebrated Manouche guitarist from Holland Fapy Lafertin, already
established in the UK as the lead guitarist with the Belgian band Waso and at the time without doubt the most famous European Gypsy musician since the death of Django Reinhardt.

What followed was an artistic partnership lasting ten years, hundreds of appearances
Europe-wide, a dedicated following of admirers from all over the globe, and an influence which in the early 1990’s took this little-performed but widely loved style of music from performances in clubs, pubs and wine bars to captivating concerts on stages throughout the UK and the continent of Europe.

Another further achievement of this musical relationship is the release of perhaps two of the most influential albums released in the style in modern times. Viewed by many as the best Gypsy jazz albums since the last recorded releases of Quintet of the Hot Club of France, they reinforced the quintet’s reputation and in some part continued the resurgence of the style amongst musicians and audience alike that was started by Waso in the 1970’s.