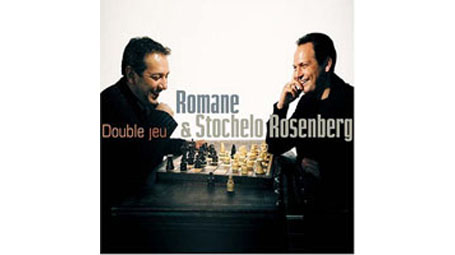 Follow Us Follow Us Follow Us Follow Us
Submit a Review
DOUBLE JEU - INTÉGRALE ROMANE VOL. 9 (With Stochelo Rosenberg)
Four years after “Elegance”, an album that sealed their friendship and musical entente, in 2004 Romane and Stochelo Rosenberg went back into the studios with a quartet to make this “Double jeu”. Recorded with Stéphane Huchard on drums and bassist Marc-Michel Le Bévillon, their album cast new foundations in the avant-gardist trend that was part of gypsy swing, a genre that, at the time, was still inflexible over its traditions. Their new record was no longer “merely” a tribute to the music of Django: this was also a homage to his innovative spirit, and who to do that better than two “sacred monsters” of the genre named Romane and Stochelo Rosenberg? A must-have album for all guitar fans.

This massive book offers a comprehensive study of the Gypsy jazz or Manouche guitar style as perceived by French guitarists Derek Sebastian and Romane, two of the finest modern day practitioners of the Django Reinhardt style.