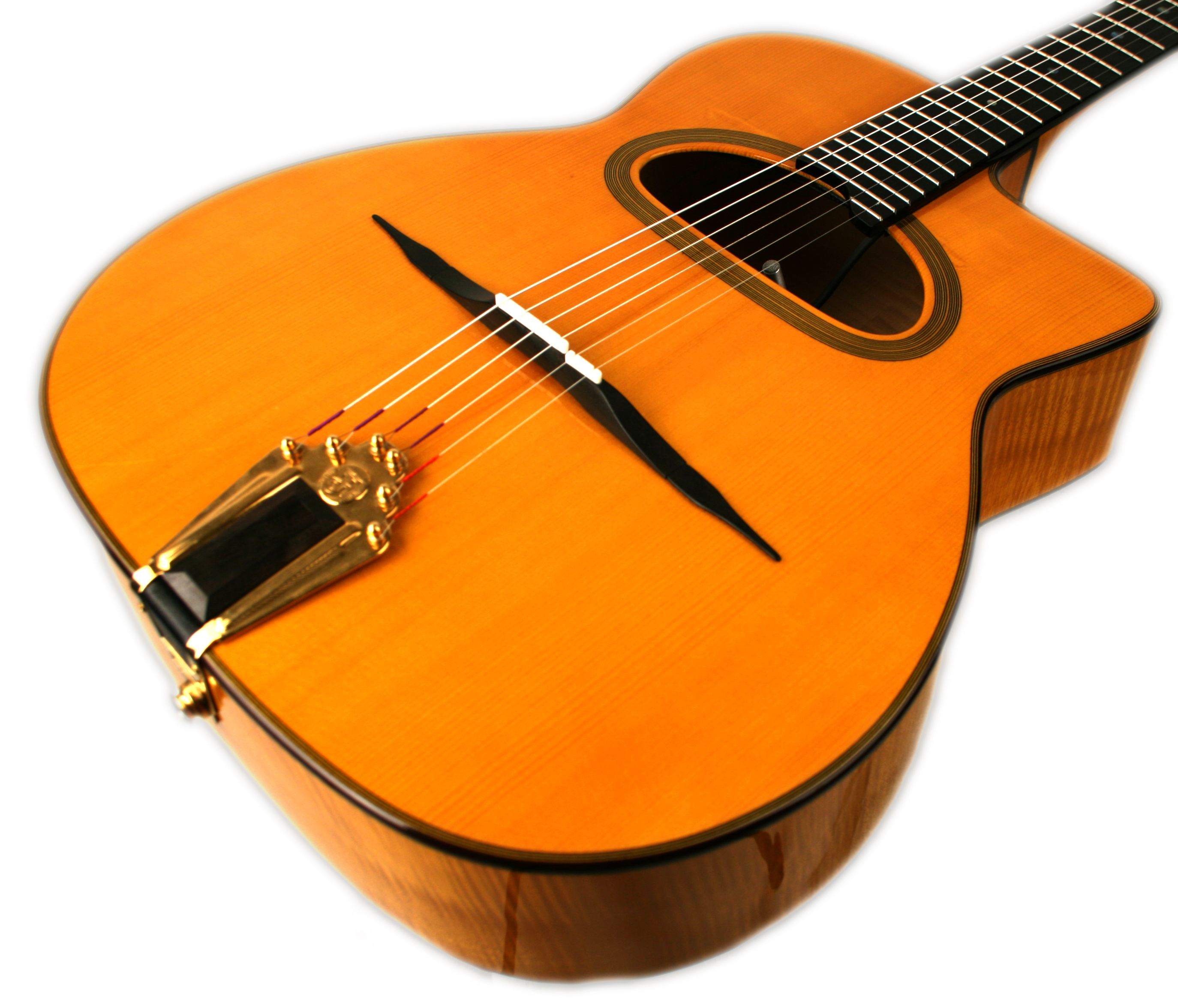 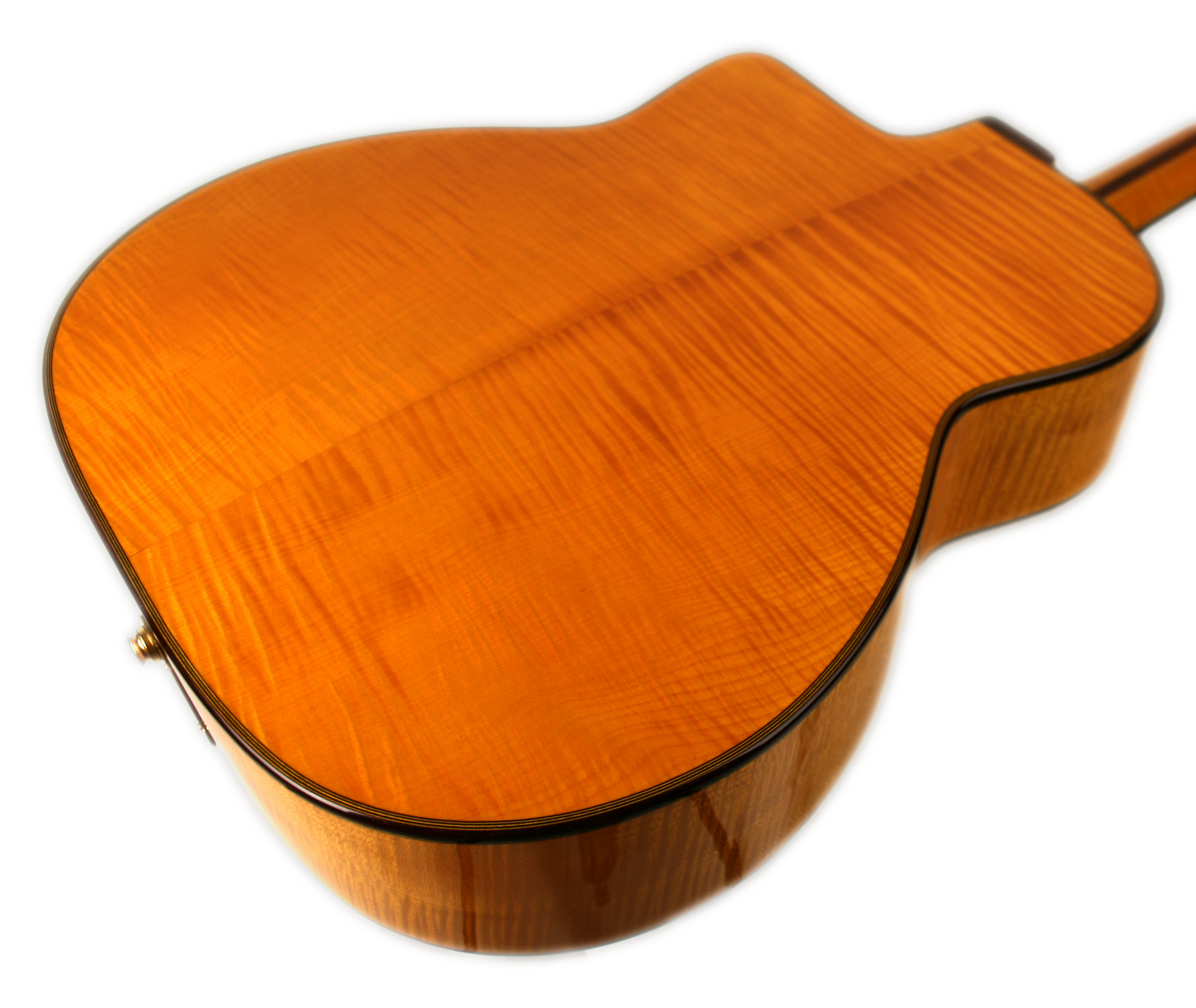 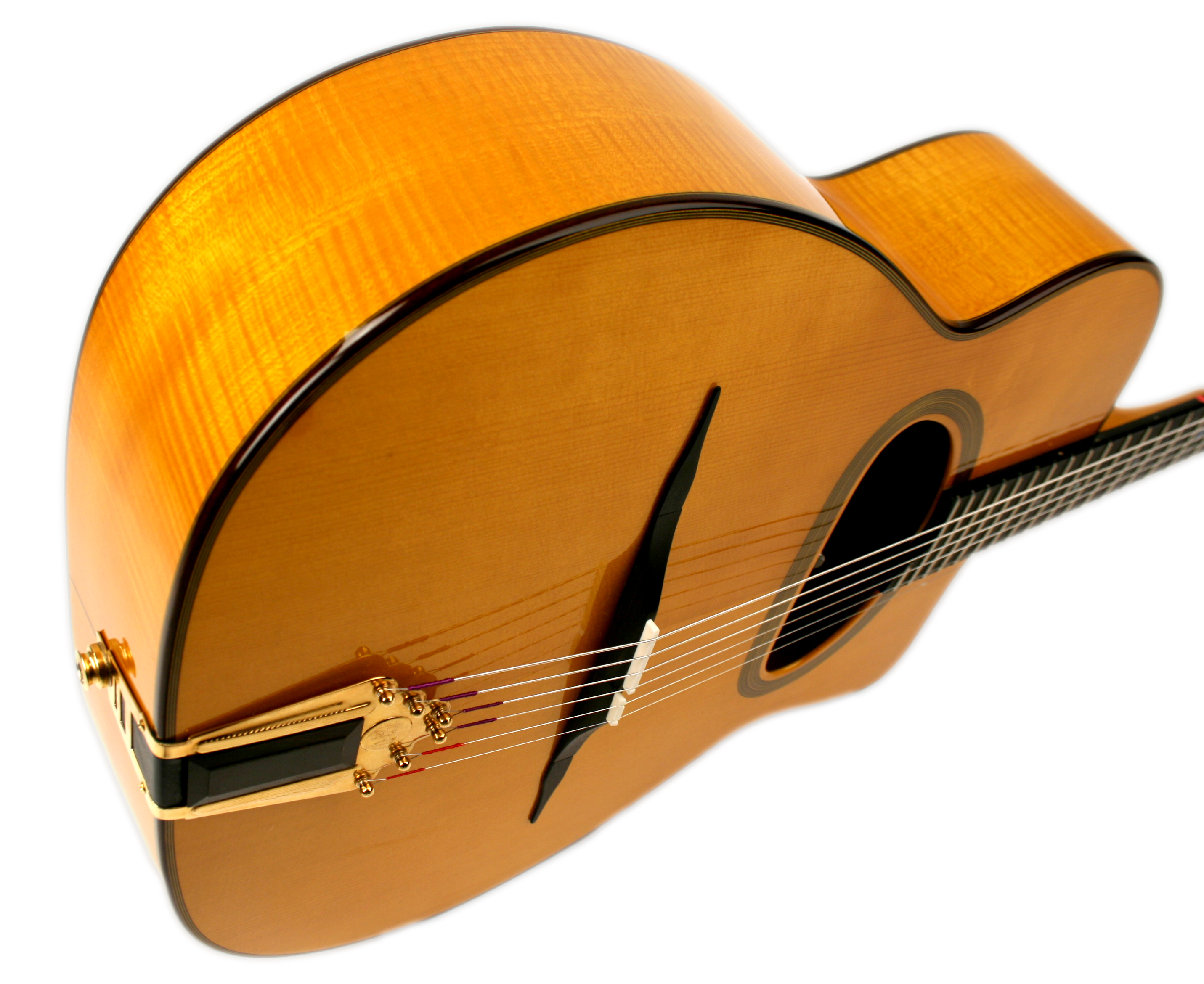 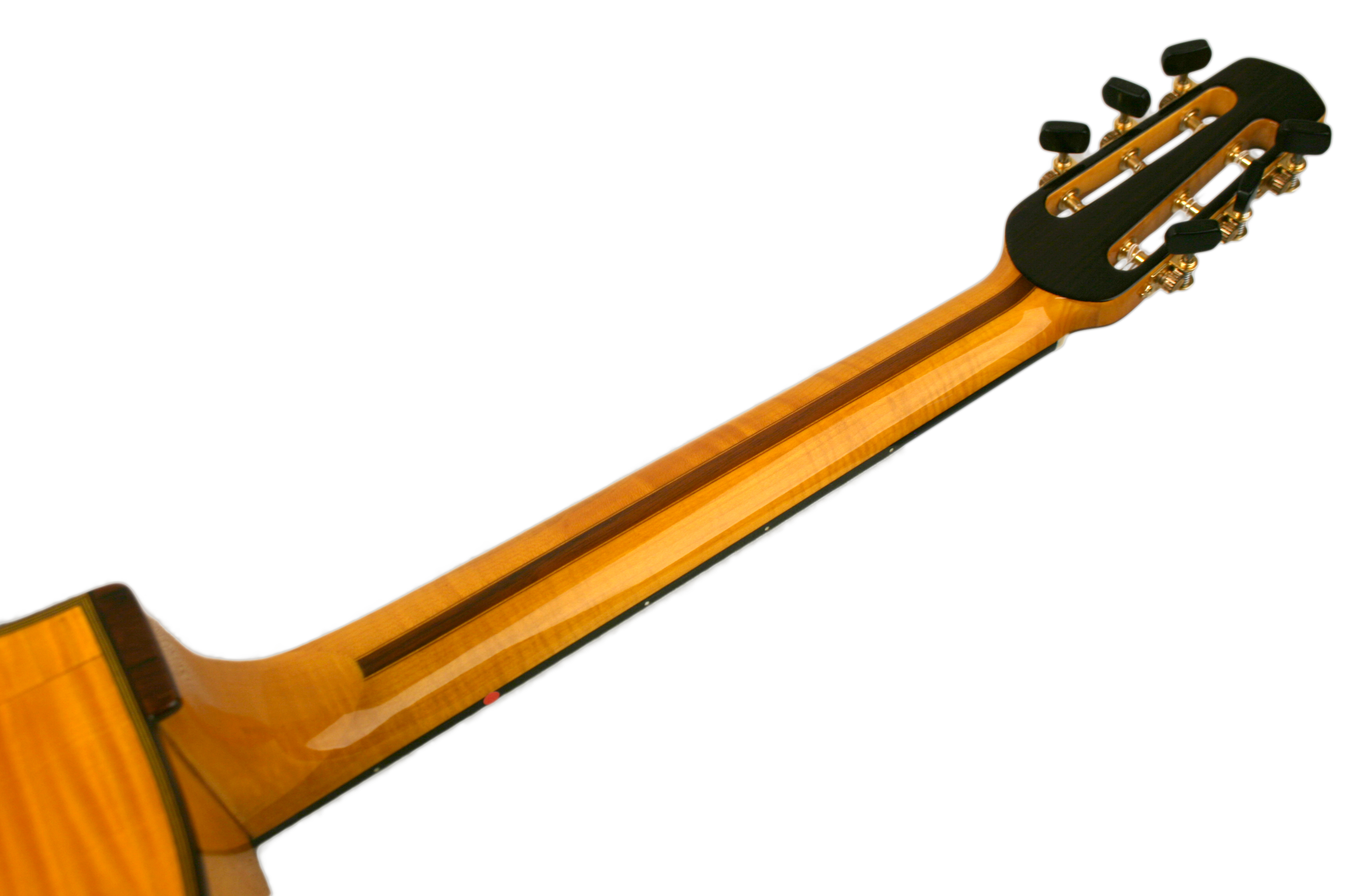 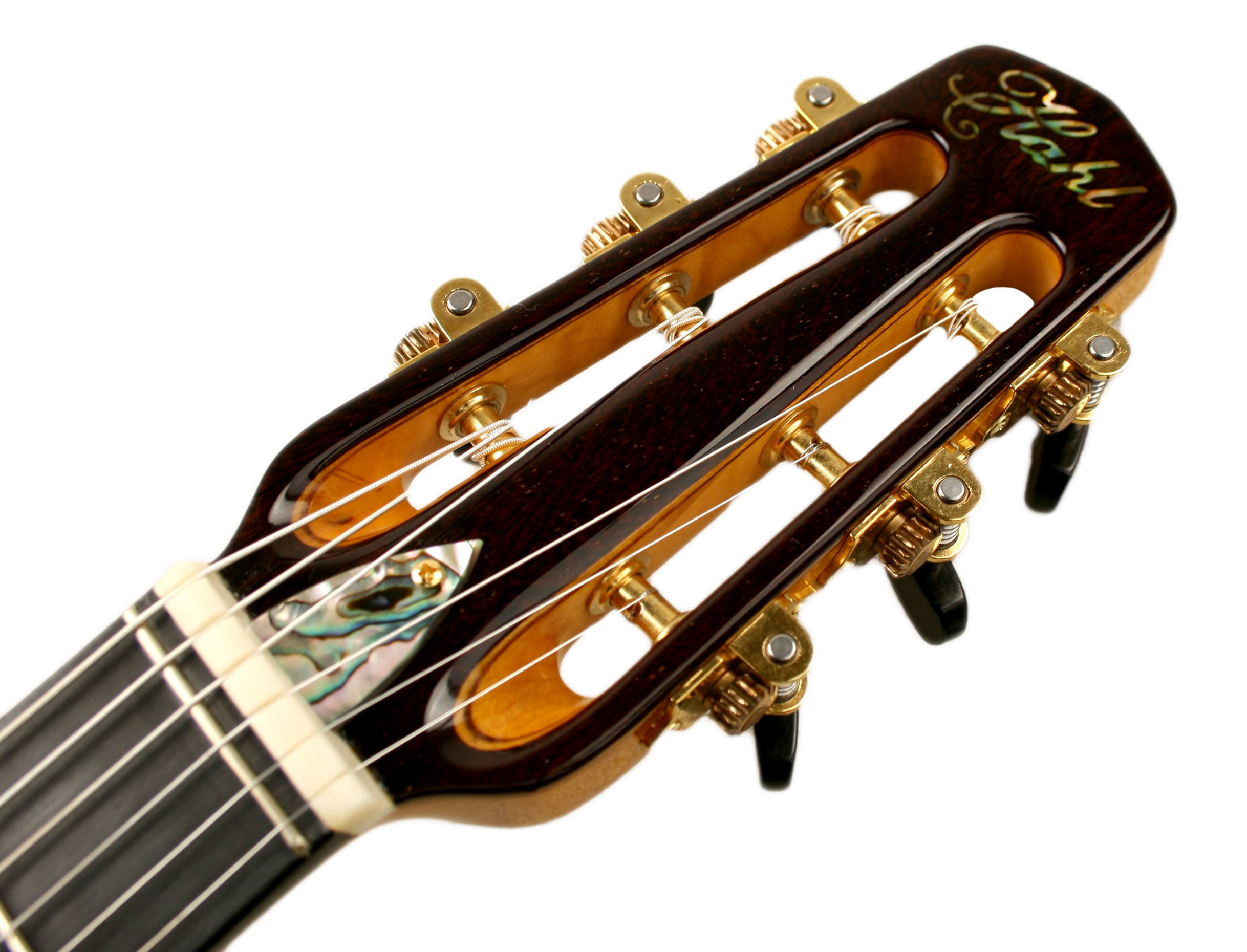 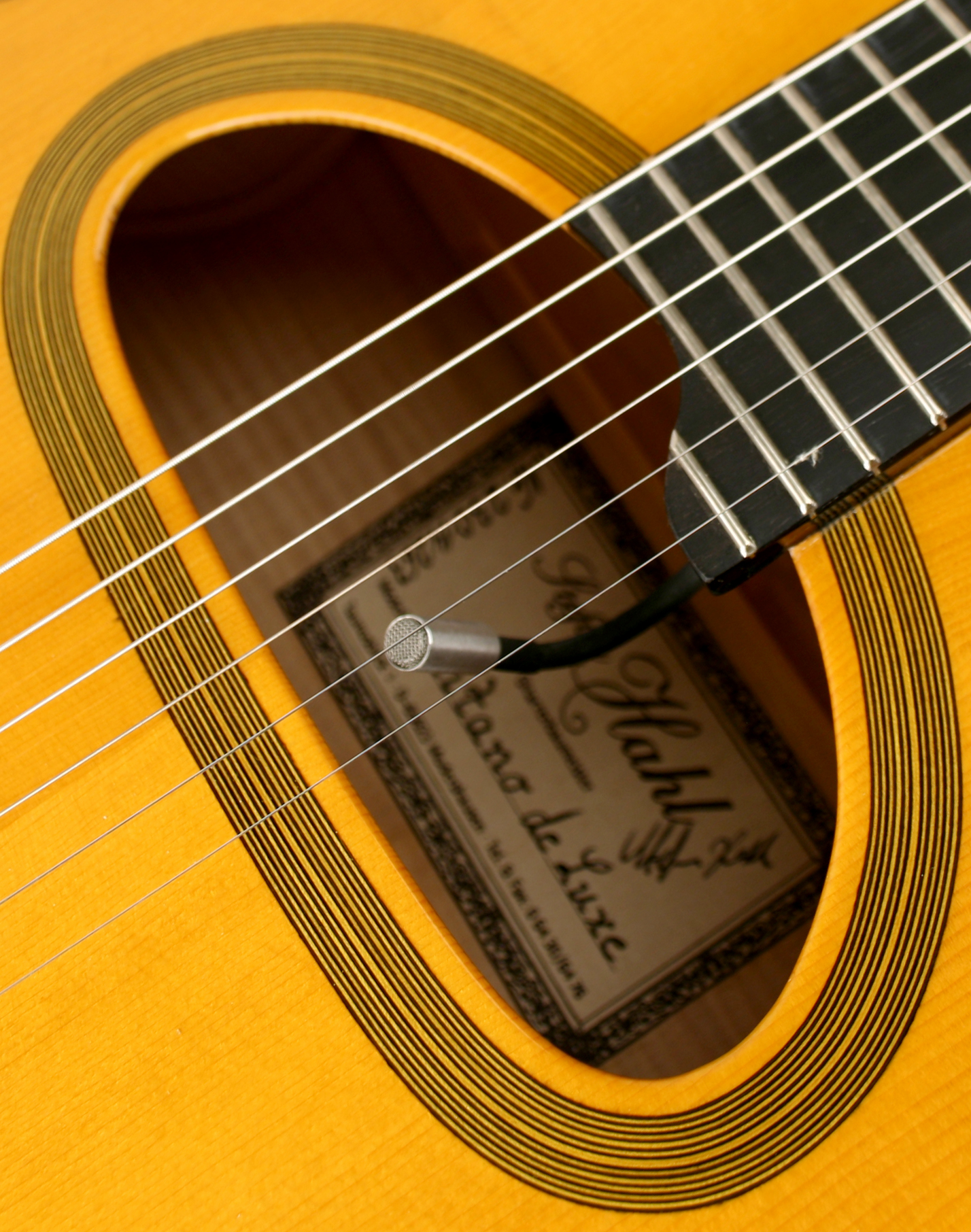 This Gitano de Luxe oval hole by Stefan Hahl represents the ultimate in contemporary Selmer guitar design. Most builders today obsessively try to replicate the design and building techniques of "golden era" guitars like the original Selmers, Busatos, and later Favinos. Hahl has dared to be different by using the Selmer design, which he has studied extensively, as a starting point for something new and unique. His guitars characteristically combine the complexity, warmth, and listenability of archtops and flatops with the punch and clarity of Selmers. The real genius of his work is that he has succeeded in making a contemporary, sophisticated sounding Gypsy guitar without loosing the essence of the Selmer sound. Others have tried to make such a guitar, but the end result is that warmth and complexity are traded for clarity and punch, which results in a very muted and dull sounding guitar. Not so with Hahl. His guitars produce notes with a rounded, satisfying tone but are still springy enough to shoot out of the instrument in volume challenged situations.

This de Luxe model features stunning, flamed maple back and sides, a 50 year aged German spruce top, and a maple neck with a walnut spline.  It is outfitted with a set of open Schaller three on a plate tuners with ebony buttons and a DR tailpiece. The ebony bridge includes two removable bone saddle pieces which can be replaced to adjust the action. Two sets of saddle pieces are included with the guitar. This instrument includes a sophisticated dual pickup system which combines a Bigtone pickup with a K&K soundhole mic which are wired to a stereo jack.

As with any Hahl, playability is closer to the super smooth feel of an archtop than the more cumbersome action you'd expect from a Selmer style guitar. At only 2.8mm action, this guitar will allow you to play things that can rarely be executed on a Gypsy guitar. Additionally, the shorter scale neck gives the guitar a slinky, smooth feel and makes long finger stretches a breeze.

This example is in excellent condition. It has two, very subtle checking lines in the finish (one on the top and one on the back.) They're very difficult to see and require just the right light and angle to make out. Other than that, this guitar is in essentilally like new condition.

Hahl's de Lux models sell for around $12K new and there's about a two year waiting list. Treat yourself to this wonderful example at a price that is almost too good to be true!