Hahl 40 year aged woods and a K&K Trinity pickup system make this German built instrument a players dream! Arts & Entertainment stefan-hahl-gitano-de-luxe-2012 Gitano De Luxe 5.0 1
Djosh
5 5
This is the most even guitar I've ever played; sonically there are no dead spots, the feel is good all up and down the neck, the volume increases linearly as you drive it harder. It's almost spooky how well it does what you ask. Yay!
View Offer DjangoBooks.com https://www.djangobooks.com/Item/stefan-hahl-gitano-de-luxe-2012
Location
Location
Home / Previously Sold / Stefan Hahl Guitars (Made in Germany) / 2012 Hahl Gitano De Luxe 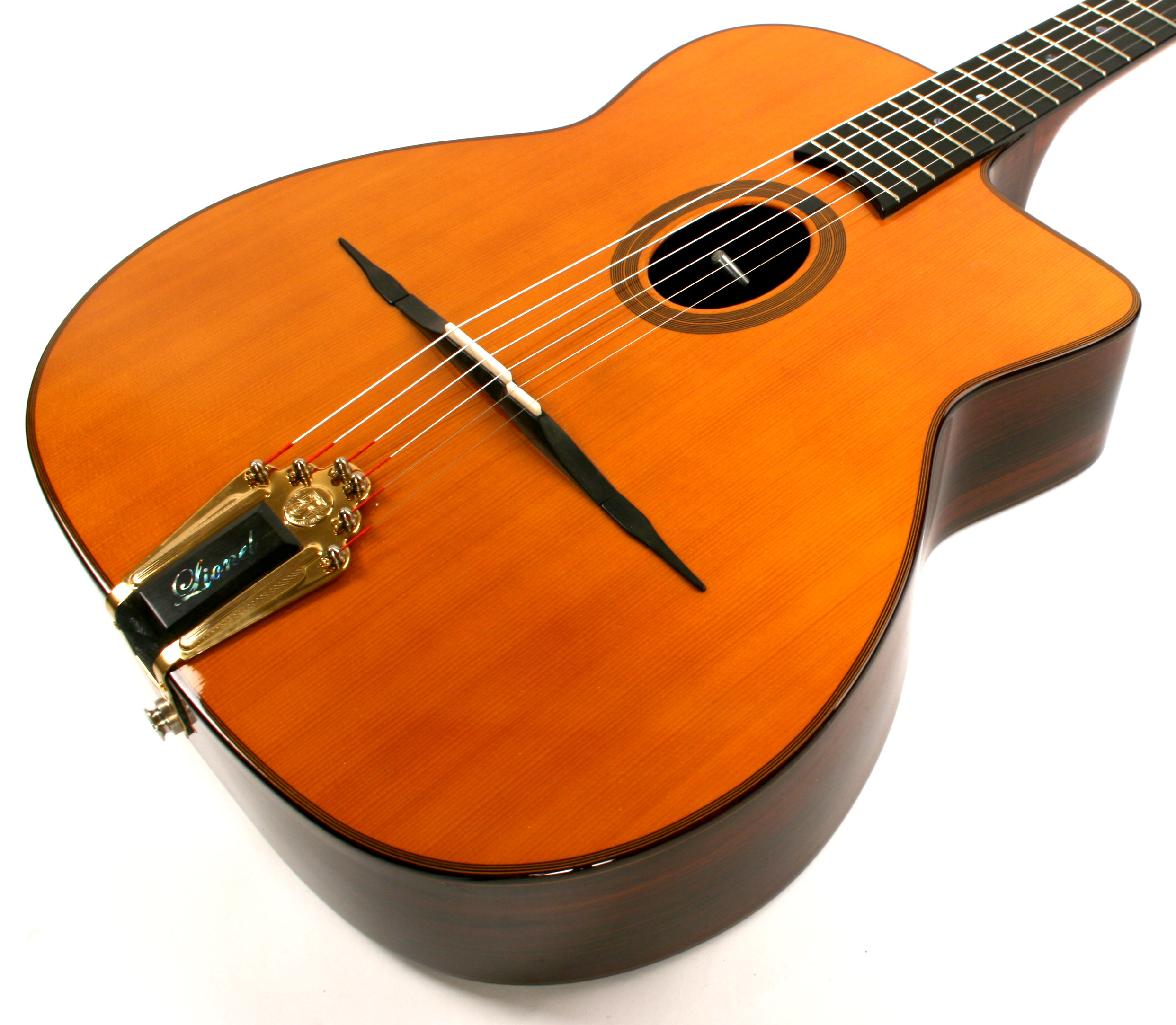 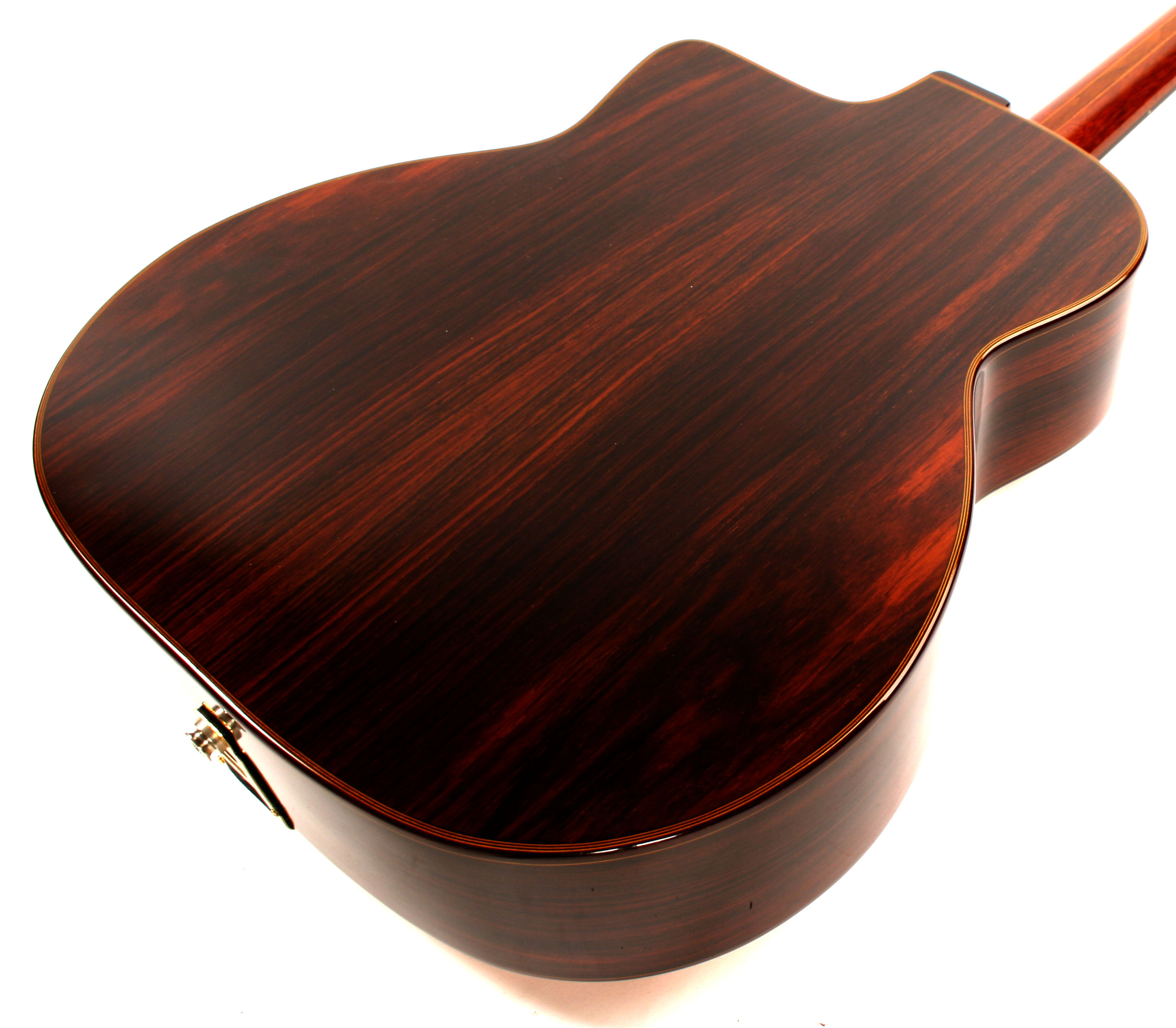 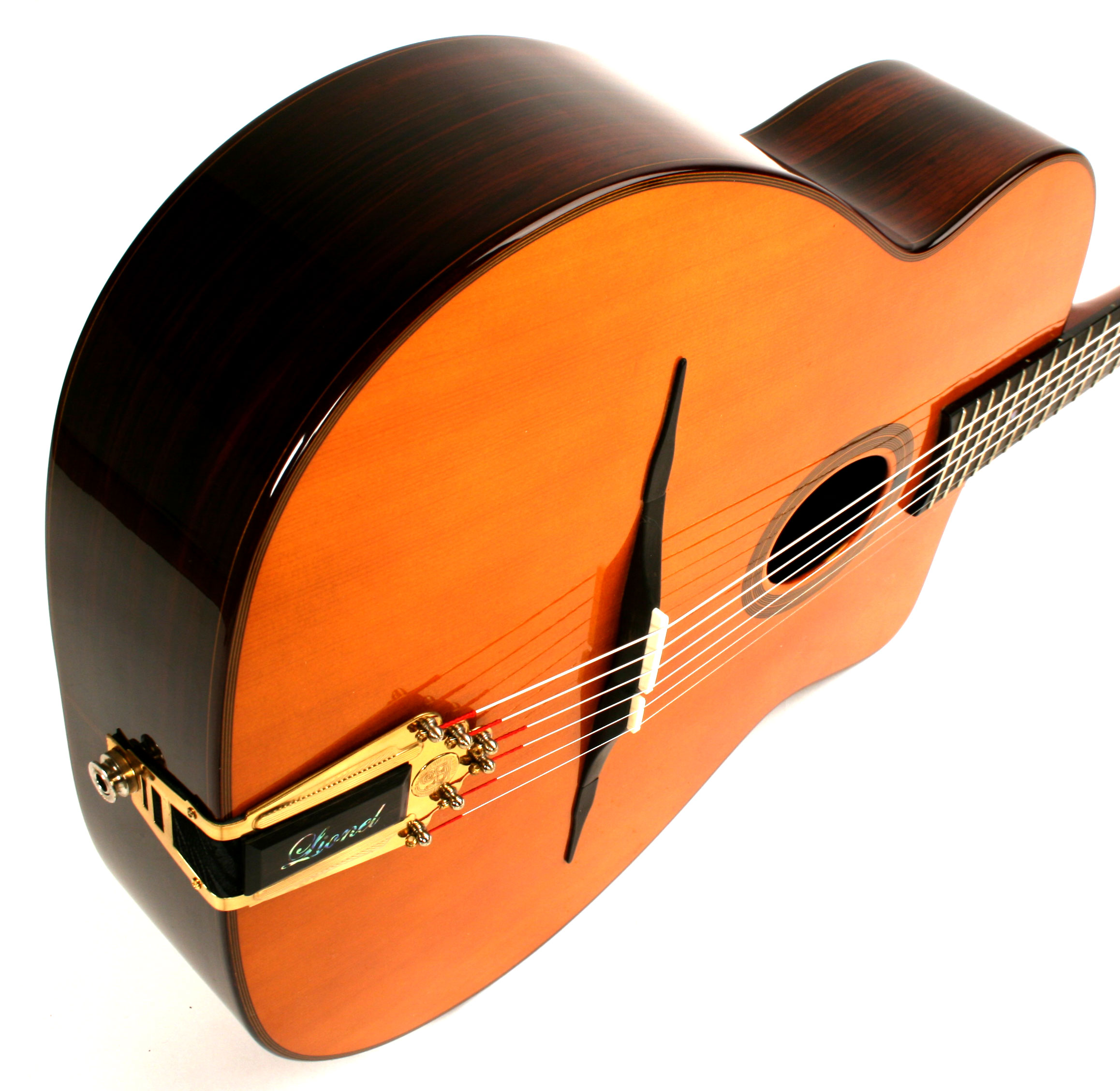 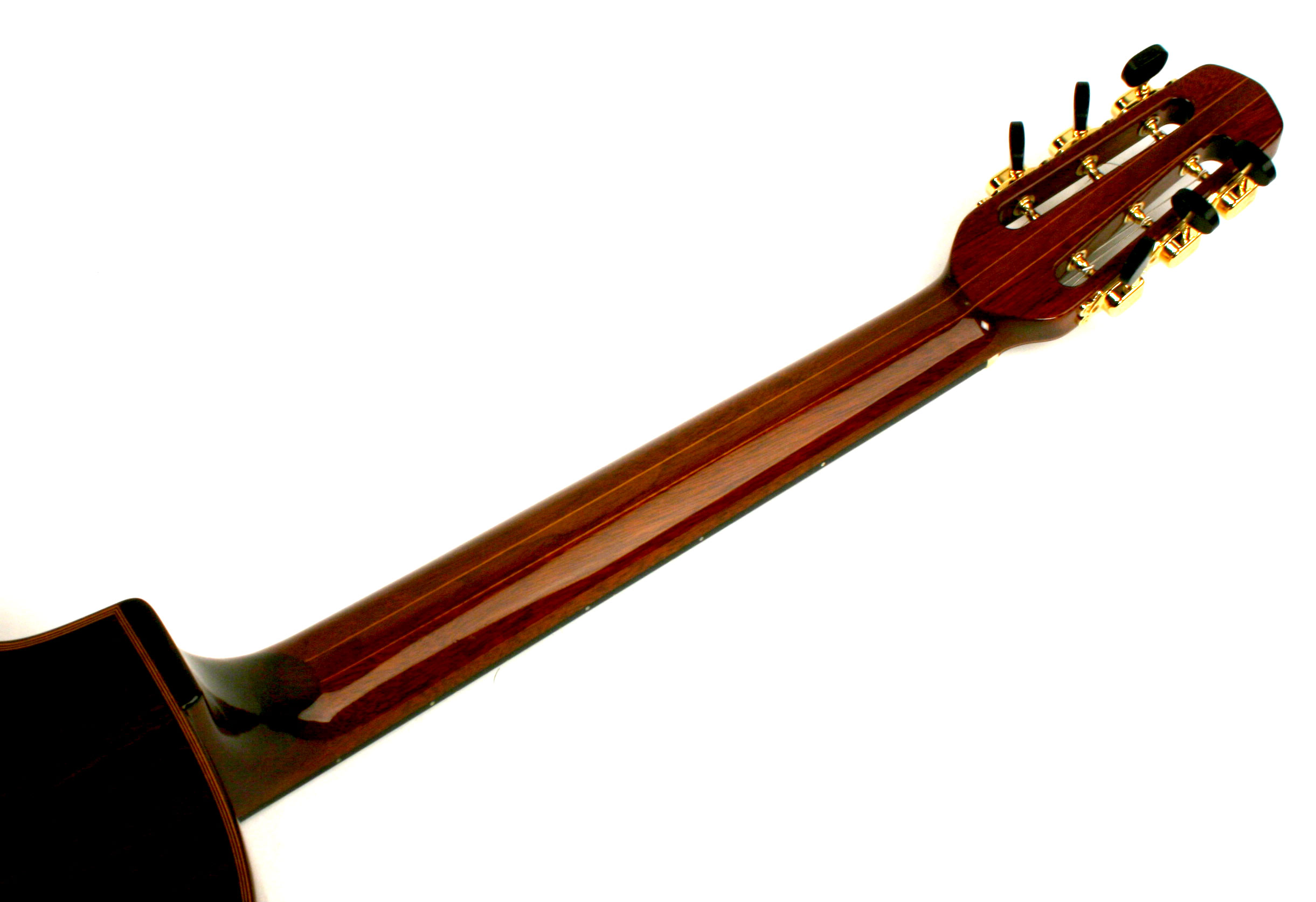 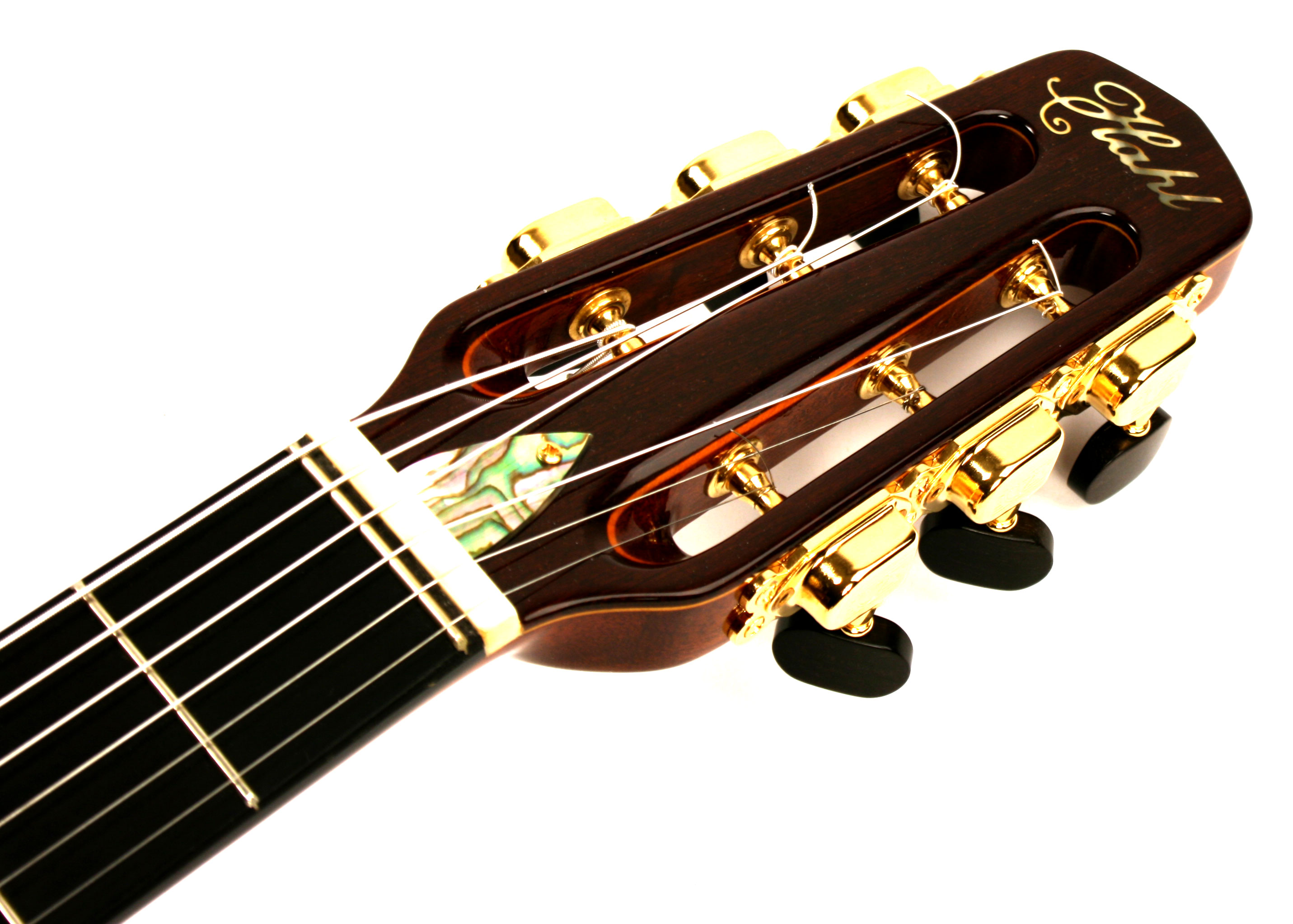 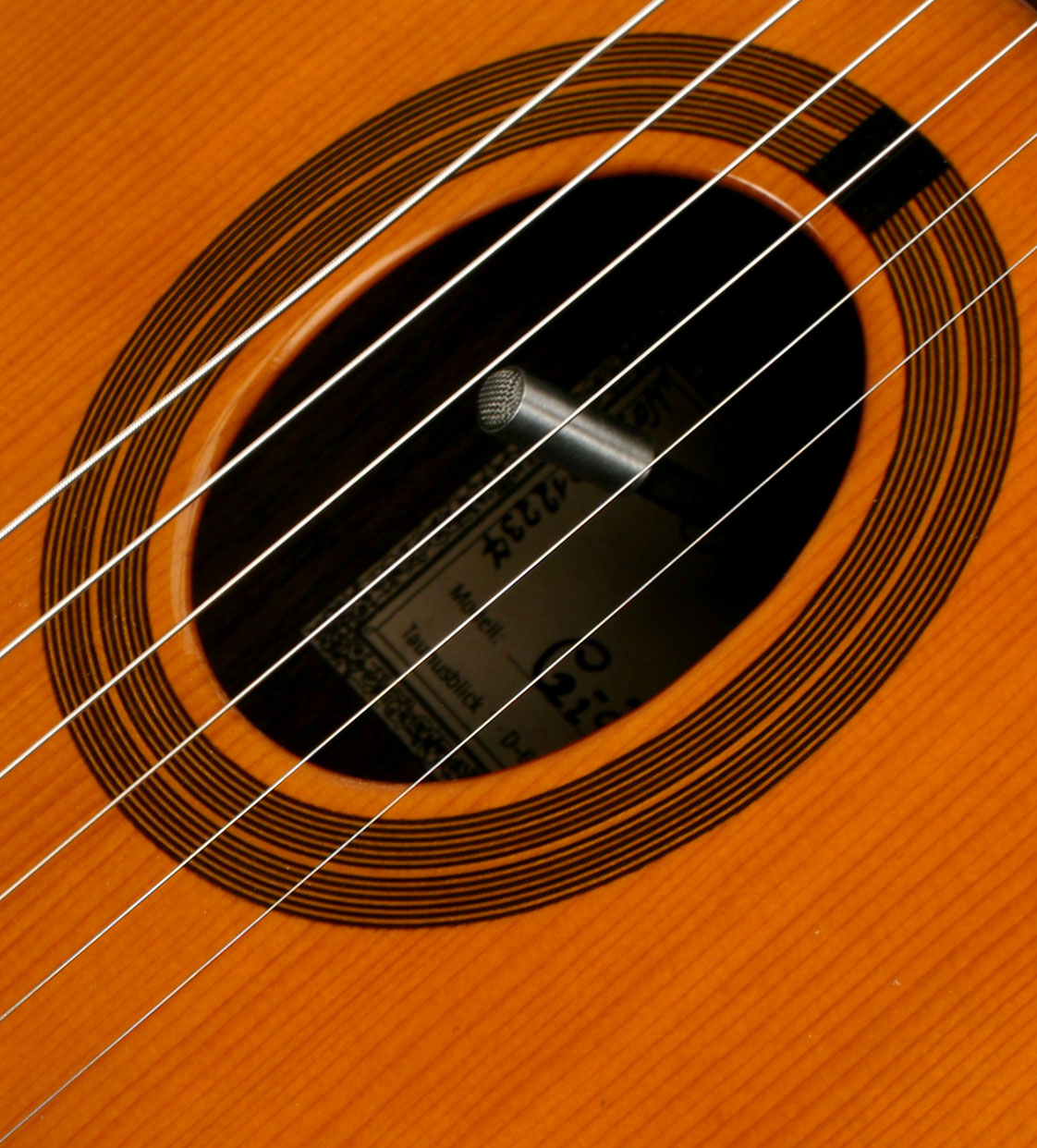 This mint condition Gitano De Luxe oval hole by Stefan Hahl represents the ultimate in contemporary Selmer guitar design. Most builders today obsessively try to replicate the design and building techniques of "golden era" guitars like the original Selmers, Busatos, and later Favinos. Hahl has dared to be different by using the Selmer design, which he has studied extensively, as a starting point for something new and unique. His guitars characteristically combine the complexity, warmth, and listenability of archtops and flatops with the punch and clarity of Selmers. The real genius of his work is that he has succeeded in making a contemporary, sophisticated sounding Gypsy guitar without loosing the essence of the Selmer sound. Others have tried to make such a guitar, but the end result is that warmth and complexity are traded for clarity and punch, which results in a very muted and dull sounding guitar. Not so with Hahl. His guitars produce notes with a rounded, satisfying tone but are still springy enough to shoot out of the instrument in volume challenged situations.

This mint condition example was constructed with a 40 year aged top, Brazilian rosewood back and sides, and a three piece mahogany/walnut neck. It has been fitted with a set of Schaller Classic Deluxe tuners with ebony buttons and a DR tailpiece. The tailpiece insert has the original owner's name inscribed in abalone. The tailpiece can easily be swapped out for a blank one if so desired.

This instrument is gig ready, with K&K's Trinity pickup installed. The pickup combines piezo sensors with an internal mic for optimal tone and feedback resistance.

The tone of this instrument has the balance, warmth, and projection that made Hahl famous among the luminaries of Gypsy jazz. As a truly modern Gypsy guitar, it is capable in a variety of settings from traditional jazz, to modern jazz, and even folk. The 40 year aged woods add the maturity and clarity that you normally only hear in well aged vintage guitars. Additionally, the easy playing 3mm action makes it feel more like an archtop than a Gypsy guitar. It's the perfect instrument for today's Gypsy guitarist!

A new Gitano De Luxe, especially one with a sophisticated pickup system, would cost well over $10K new, making this mint condition example an astounding value! Come save yourself some money and get an amazing guitar to boot...

This is the most even guitar I've ever played; sonically there are no dead spots, the feel is good all up and down the neck, the volume increases linearly as you drive it harder. It's almost spooky how well it does what you ask. Yay!