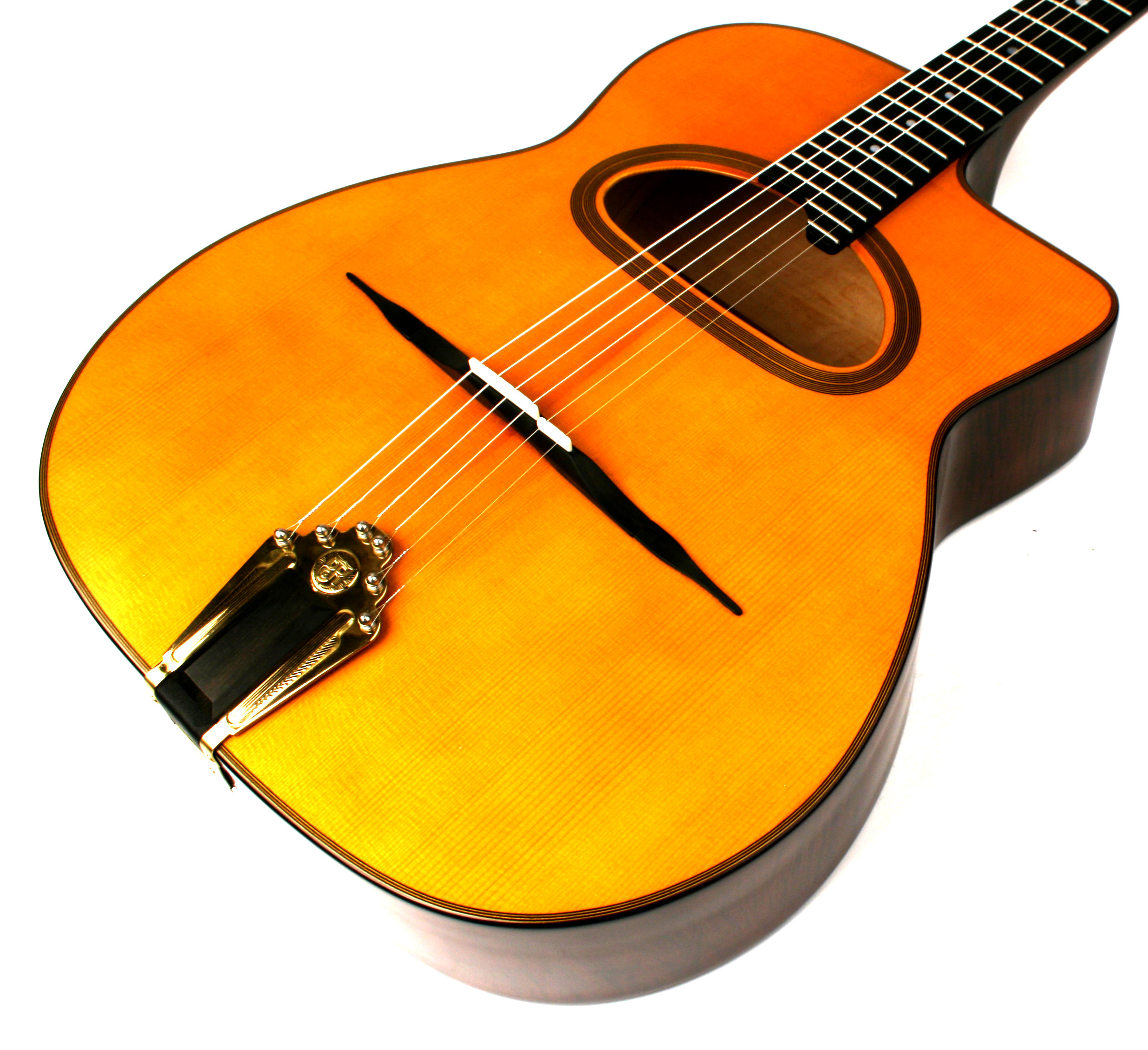 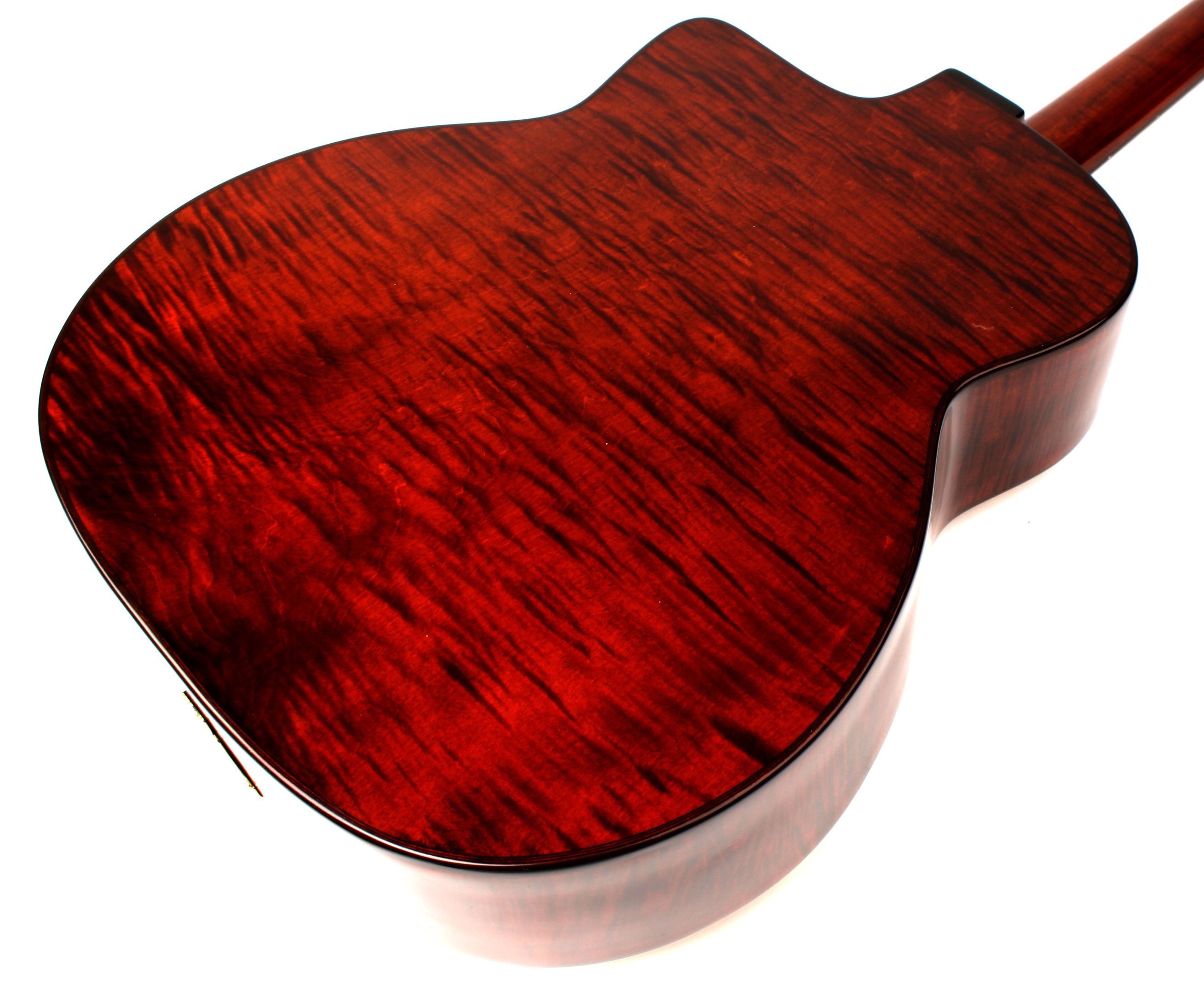 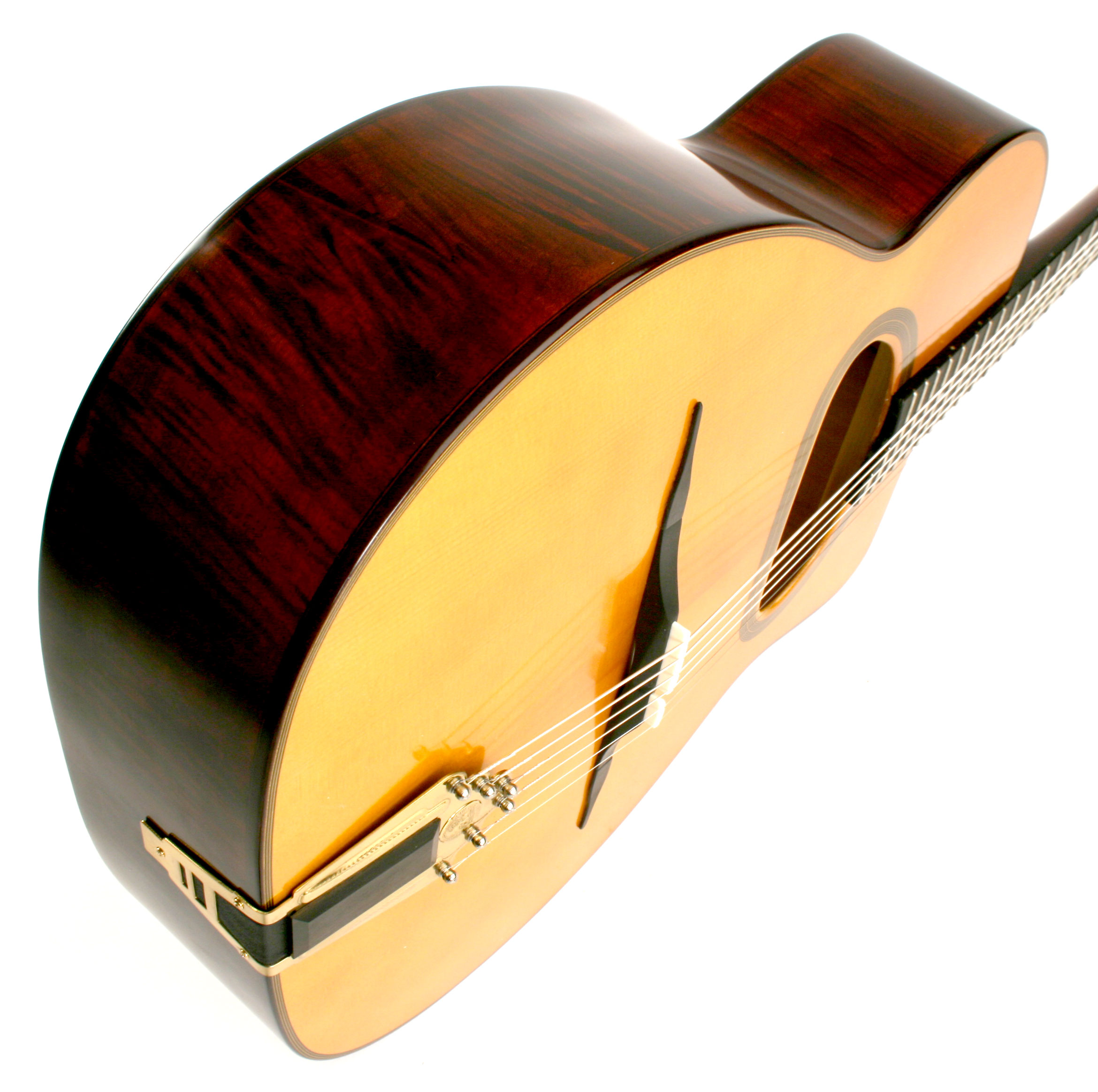 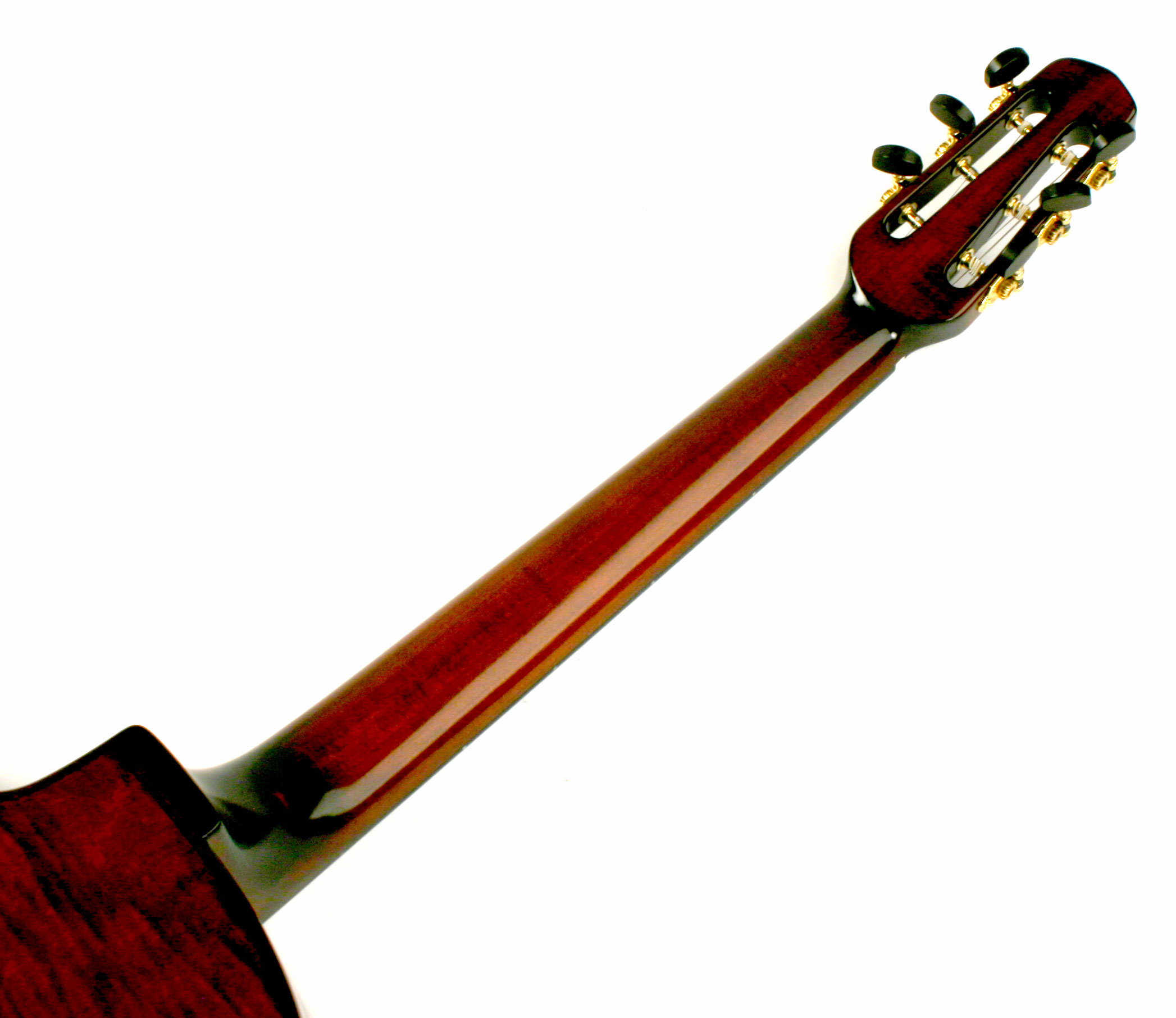 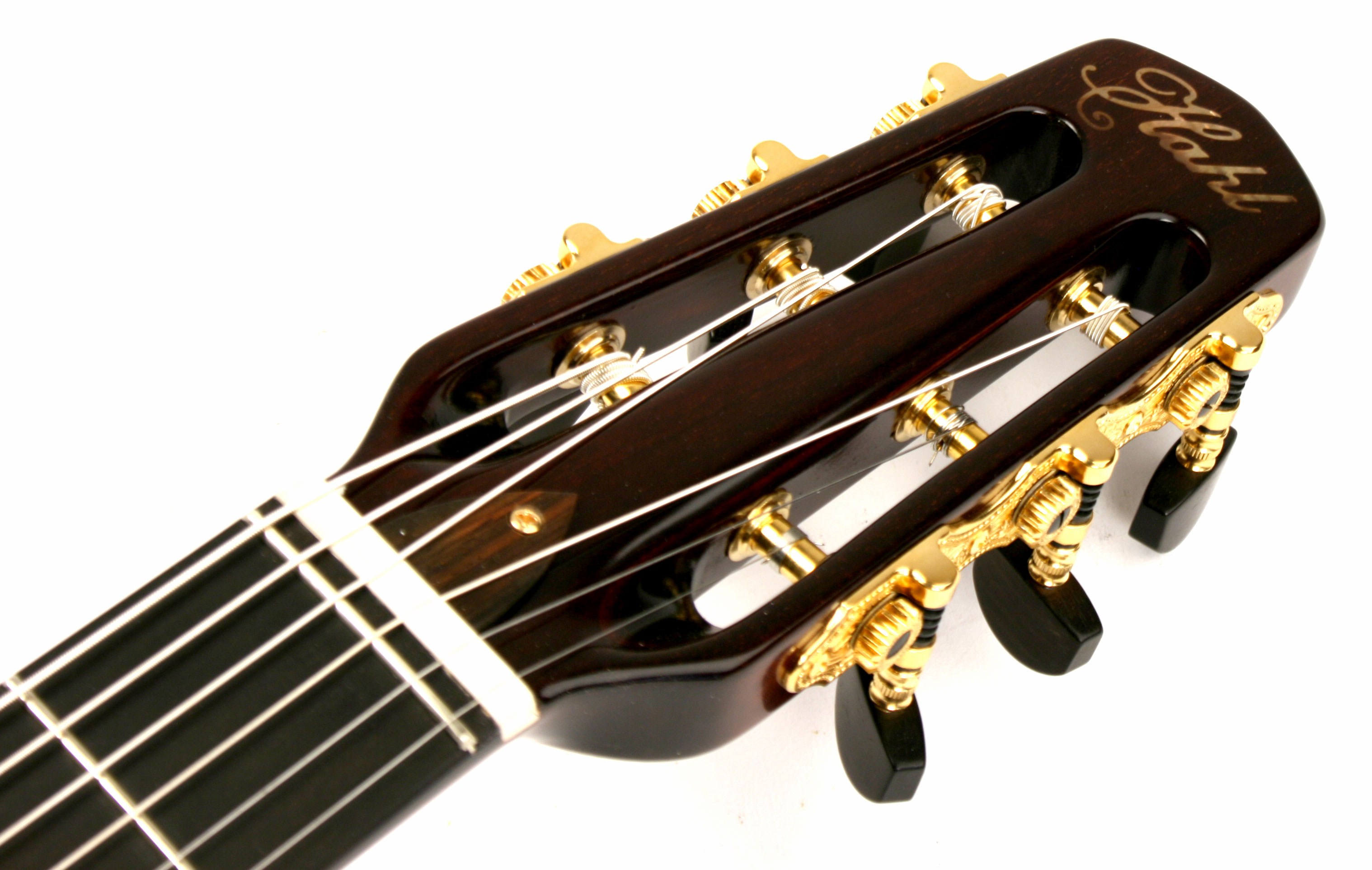 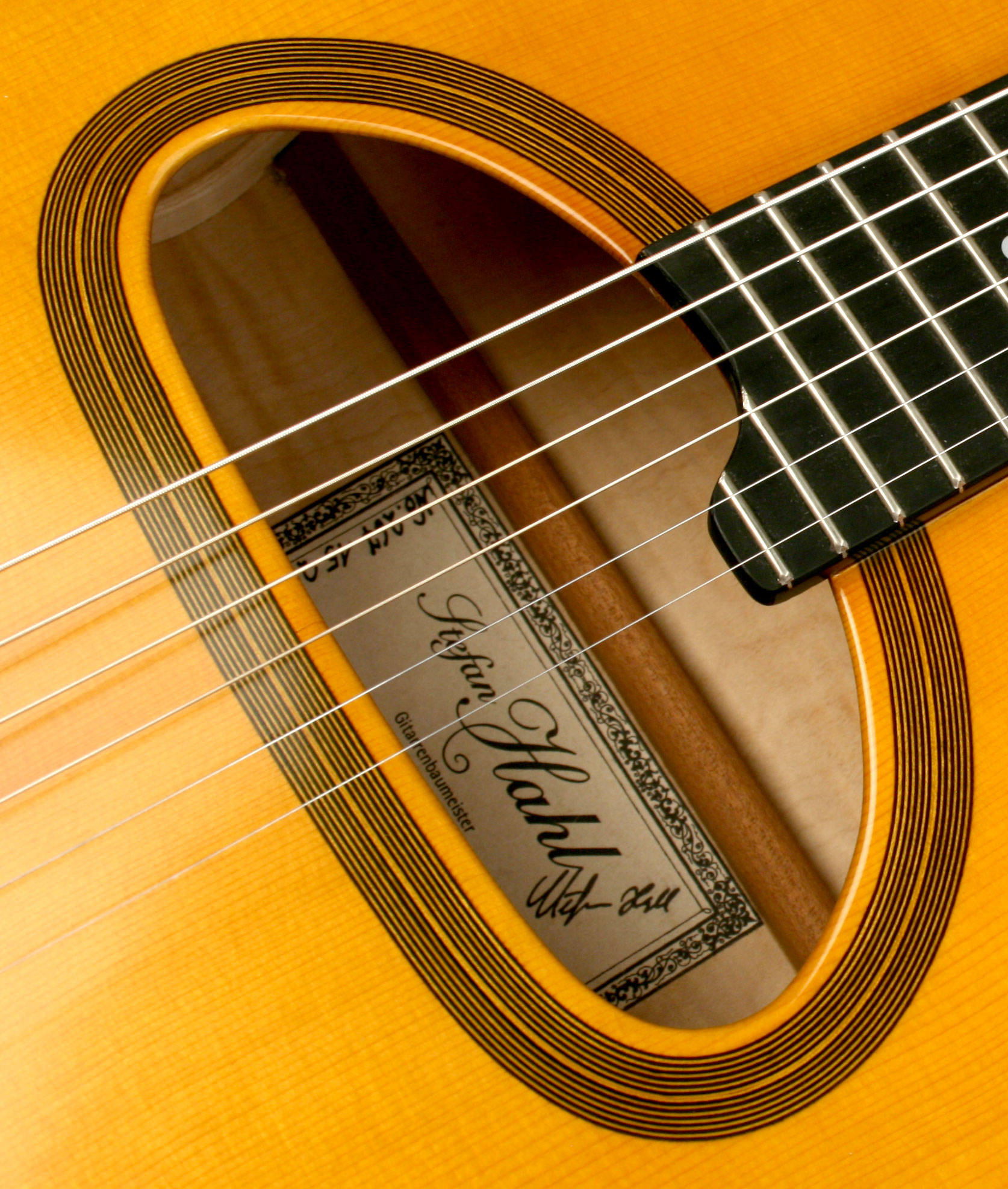 This Gitano de Luxe Dorado Schmitt signature model by Stefan Hahl represents the ultimate in contemporary Selmer guitar design. Most builders today obsessively try to replicate the design and building techniques of "golden era" guitars like the original Selmers, Busatos, and later Favinos. Hahl has dared to be different by using the Selmer design, which he has studied extensively, as a starting point for something new and unique. His guitars characteristically combine the complexity, warmth, and listenability of archtops and flatops with the punch and clarity of Selmers. The real genius of his work is that he has succeeded in making a contemporary, sophisticated sounding Gypsy guitar without loosing the essence of the Selmer sound. Others have tried to make such a guitar, but the end result is that warmth and complexity are traded for clarity and punch, which results in a very muted and dull sounding guitar. Not so with Hahl. His guitars produce notes with a rounded, satisfying tone but are still springy enough to shoot out of the instrument in volume challenged situations.

Hahl's work has been well received by the very finest Gypsy guitarists today. Most notably, by Bireli Lagrene who owns three Hahl guitars and has used them on most of his recent recordings. check out: Move, Just the Way You Are, To Bi or Not to Bi, and Live in Paris. Stochelo Rosenberg, Dorado Schmitt, and Hono Winterstein also regularly perform with Hahl guitars.

This wonderful Dorado Schmitt Signature is arguably one of the best bargains in Hahl's catalog. It features a 70 year aged spurce top and 70 year aged maple back and sides that are normally reserved for Hahl's most prestigious Super De Luxe model. The Super De Luxe is about double the price of this Dorado Schmitt model, which makes this instrument a great deal as you get the sublime tone of the Hahl's most select instruments at a great price. Aged woods are one of the most important elements in achieving a refined, mature tone that all players seek, and the older the wood the better. There's no doubt that these select woods are doing their magic, as you rarely hear a new guitar with the tonal refinement that this instrument posses.

As with any Hahl, playability is closer to the super smooth feel of an archtop than the more cumbersome action you'd expect from a Selmer style guitar. At only 3mm action, this guitar will allow you to play things that can rarely be executed on a Gypsy guitar. This guitar also features a shorter 650mm scale which lowers the string tension, giving the guitar a slinky, easy playing feel. Furthermore, the shorter neck allows challenging left-hand stretches to be accomplished with ease.

The sound of this guitar lives up to Hahl's reputation as a builder of "modern Gypsy guitars." The single notes are warm, thick, and rounded in character yet still have the fast attack and "pop" that Gypsy players need. Chords are rich, full, and complex; a rare trait for a Selmer style guitar, especially the oval hole models. Even the open "cowboy" chords like G, D, C, etc sound so full you'd swear it's a flatop. Yet, the guitar still has that springy punch for leads that Selmers are known for. This is a guitar that one minute can be used to play an archtop like chord melody arrangement of a standard and then the next minute be belting out Gypsy leads around the campfire. Hahl is the only luthier who balances these two characteristics so well and this guitar is one of the best in that dual role.

Few luthiers can build a D hole guitar that achieves the proper balance between treble and bass. So often, D holes are too dark and bass heavy. Hahl is the rare luthier who can build a guitar that has the rich, full sound of the D soundhole while still retaining enough bite for leads. This example is exceptional in it's ability to produce HUGE sounding chords one minute and crisp leads the next. The leads truly sing which makes it so easy when playing in a group setting. Just touch the pick to the string and the notes fly out almost effortlessly

This example is in excellent condition, with just some signs of light use. There is some light pickwear on the top and one or two very, very small dings. The ink on the label has run a bit. Otherwise, it looks almost new!