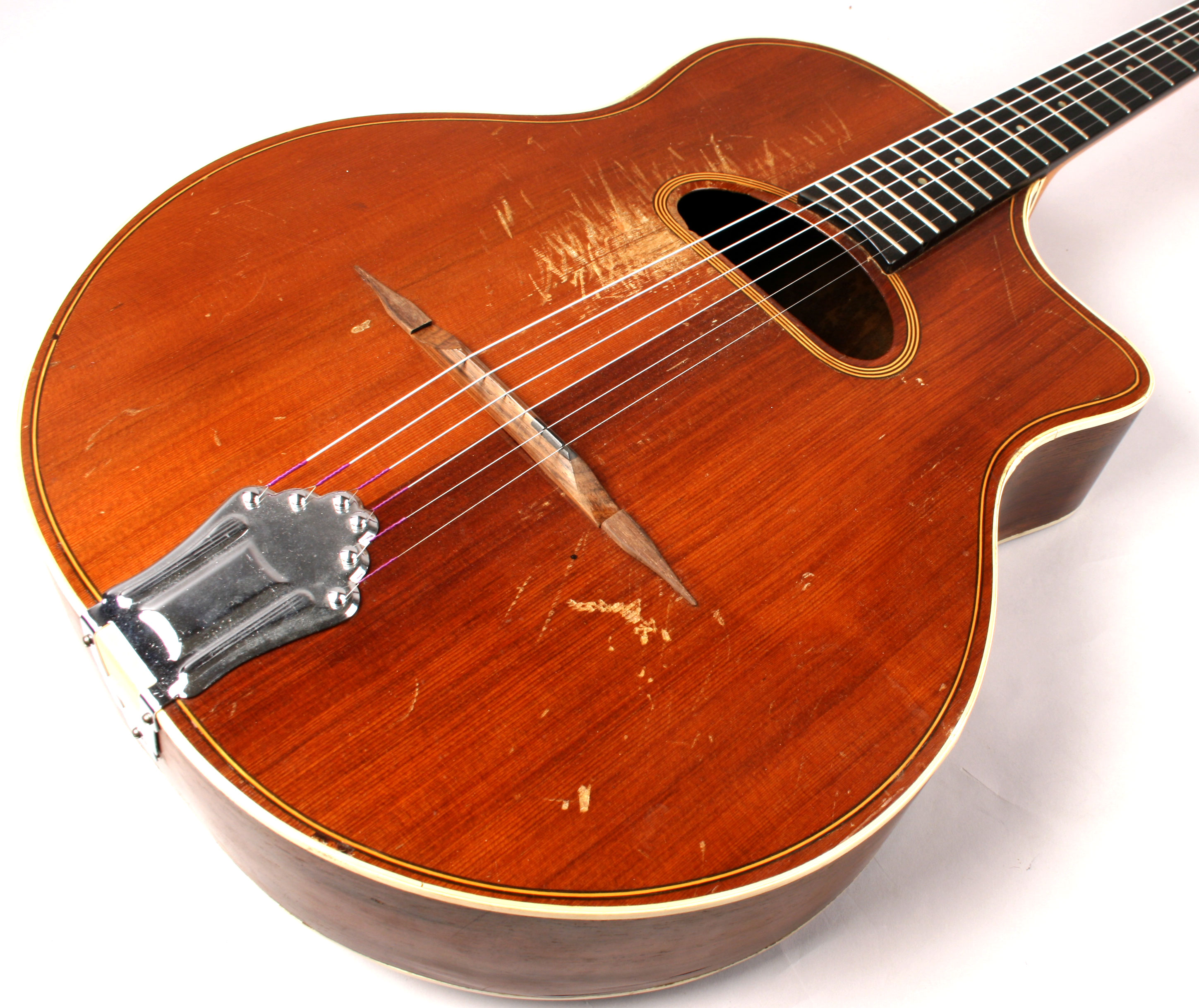 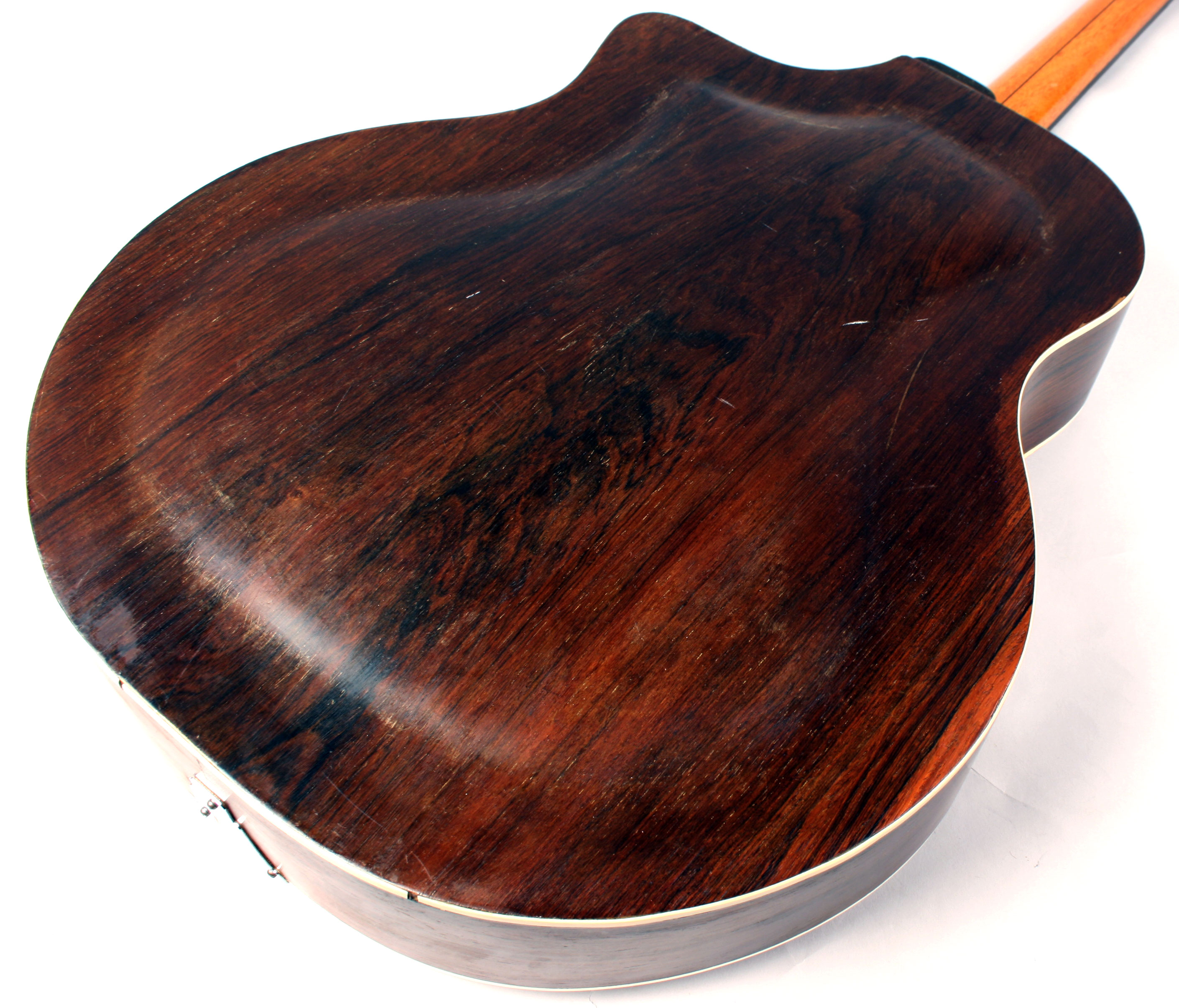 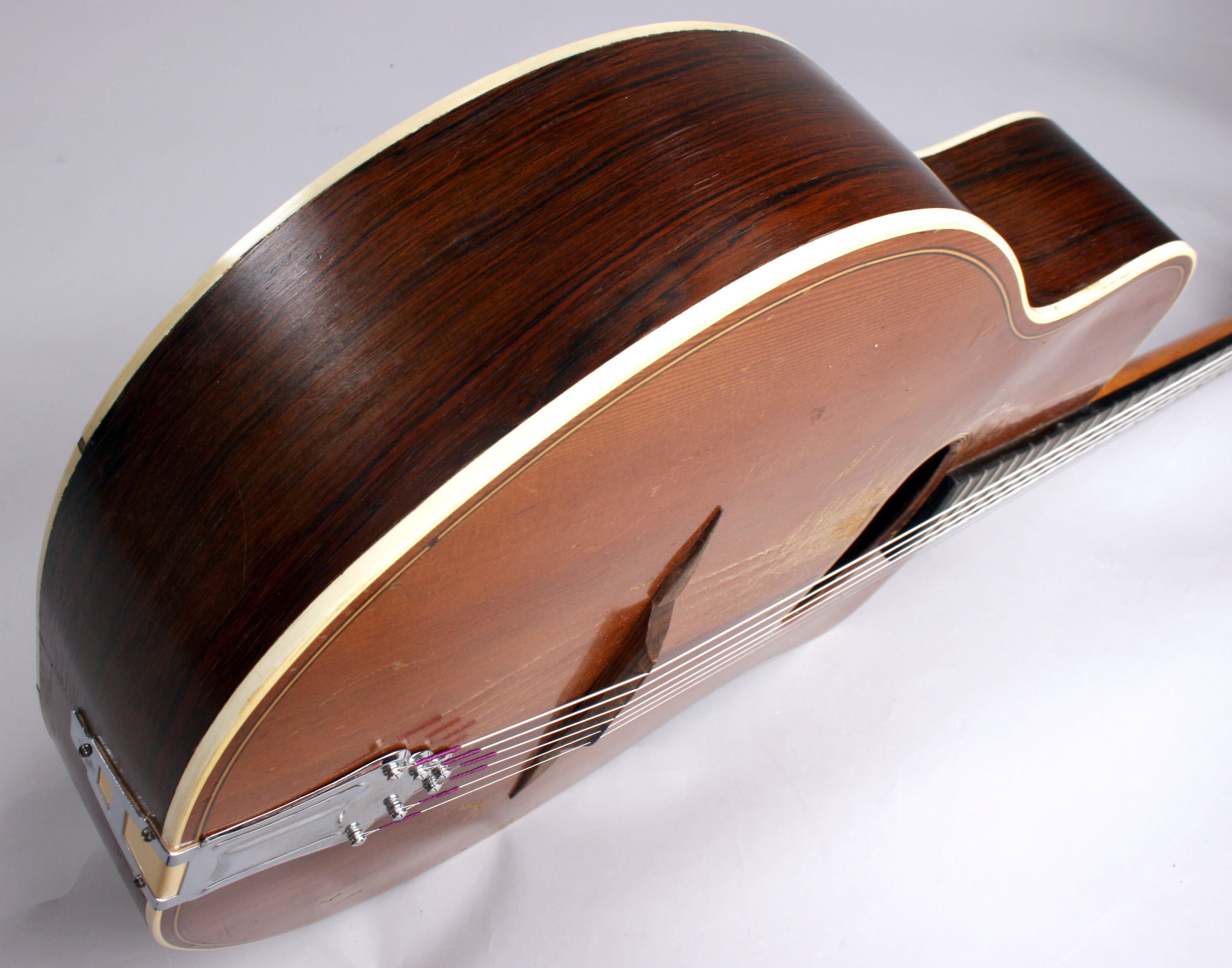 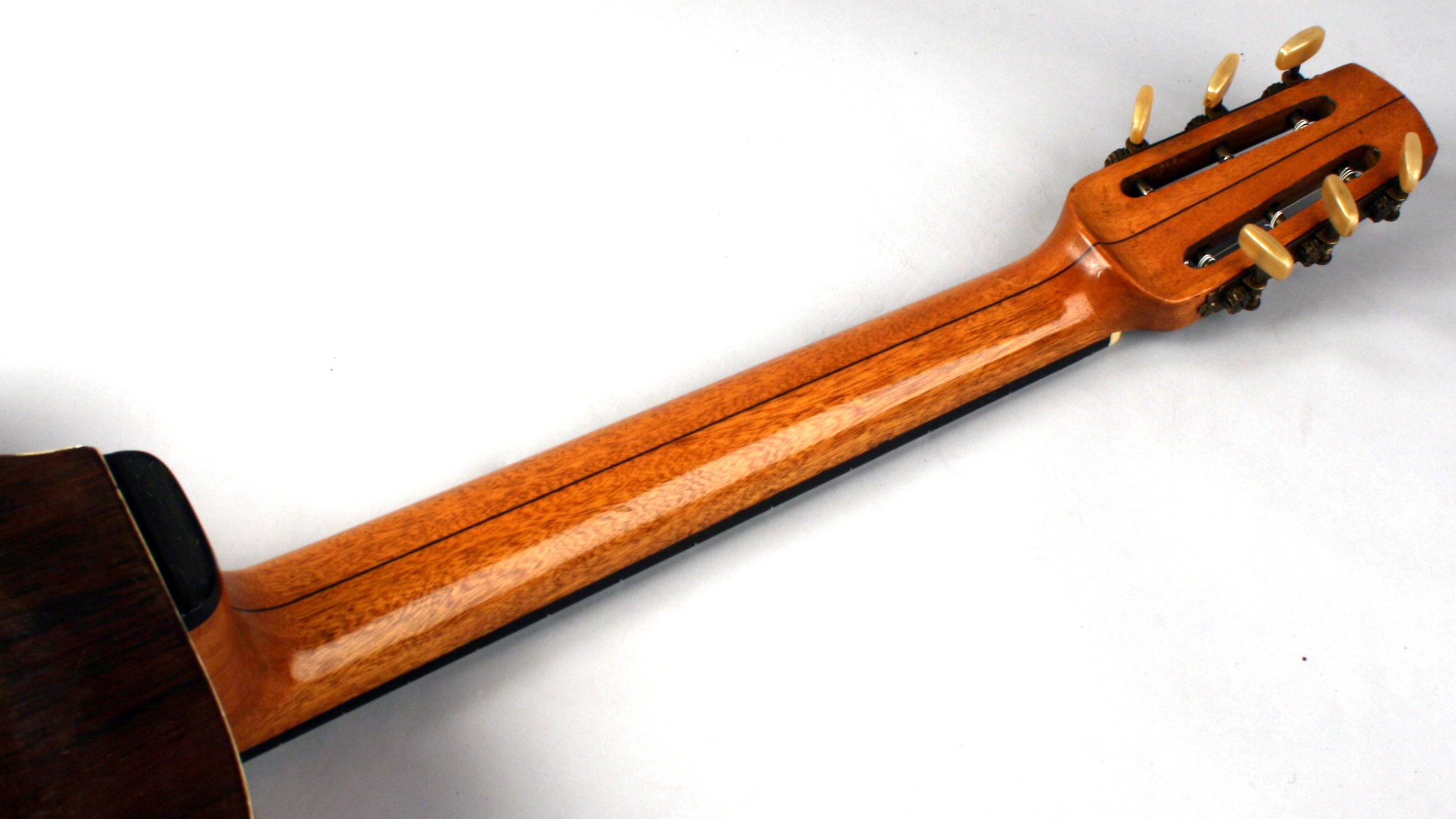 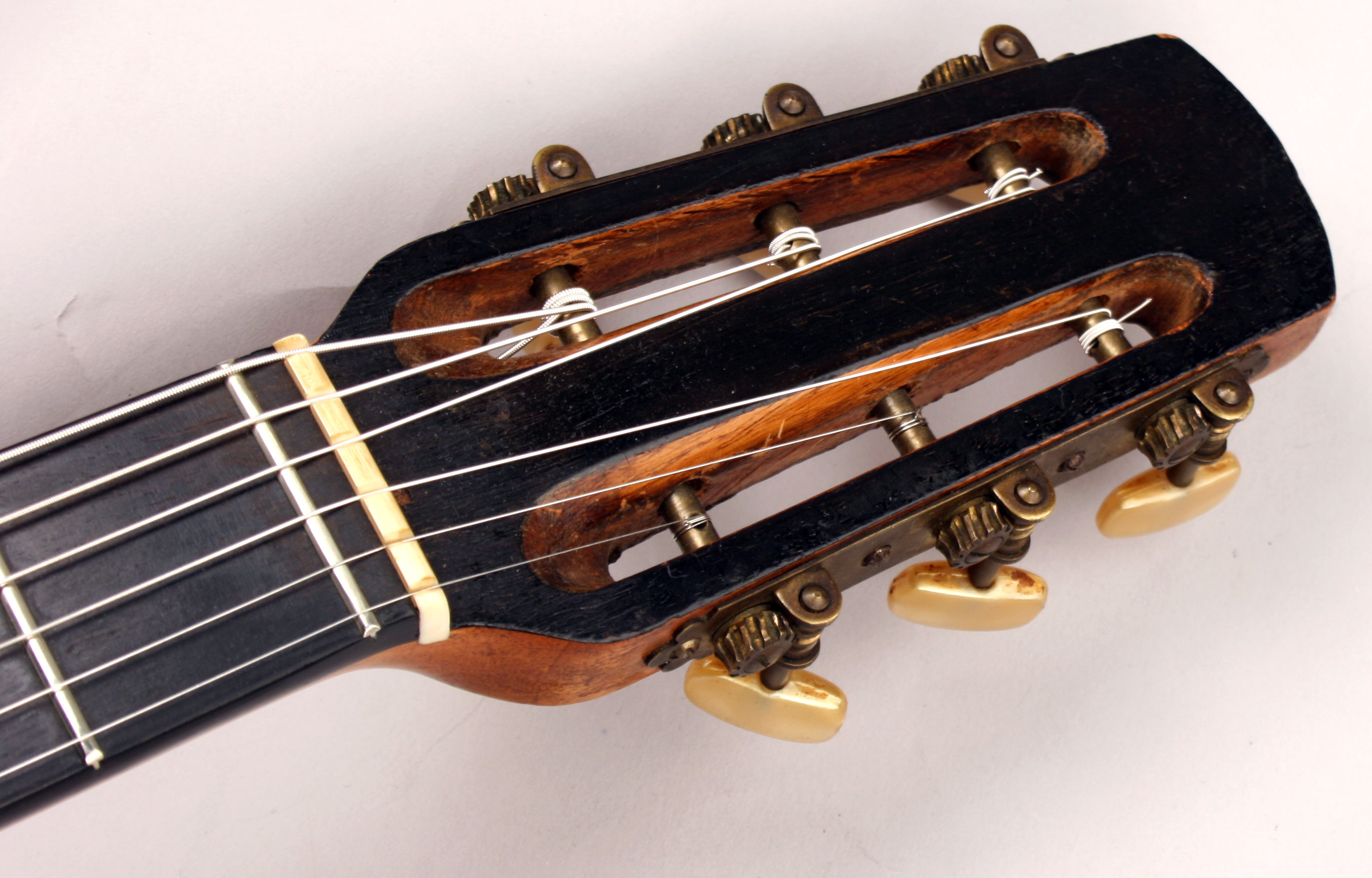 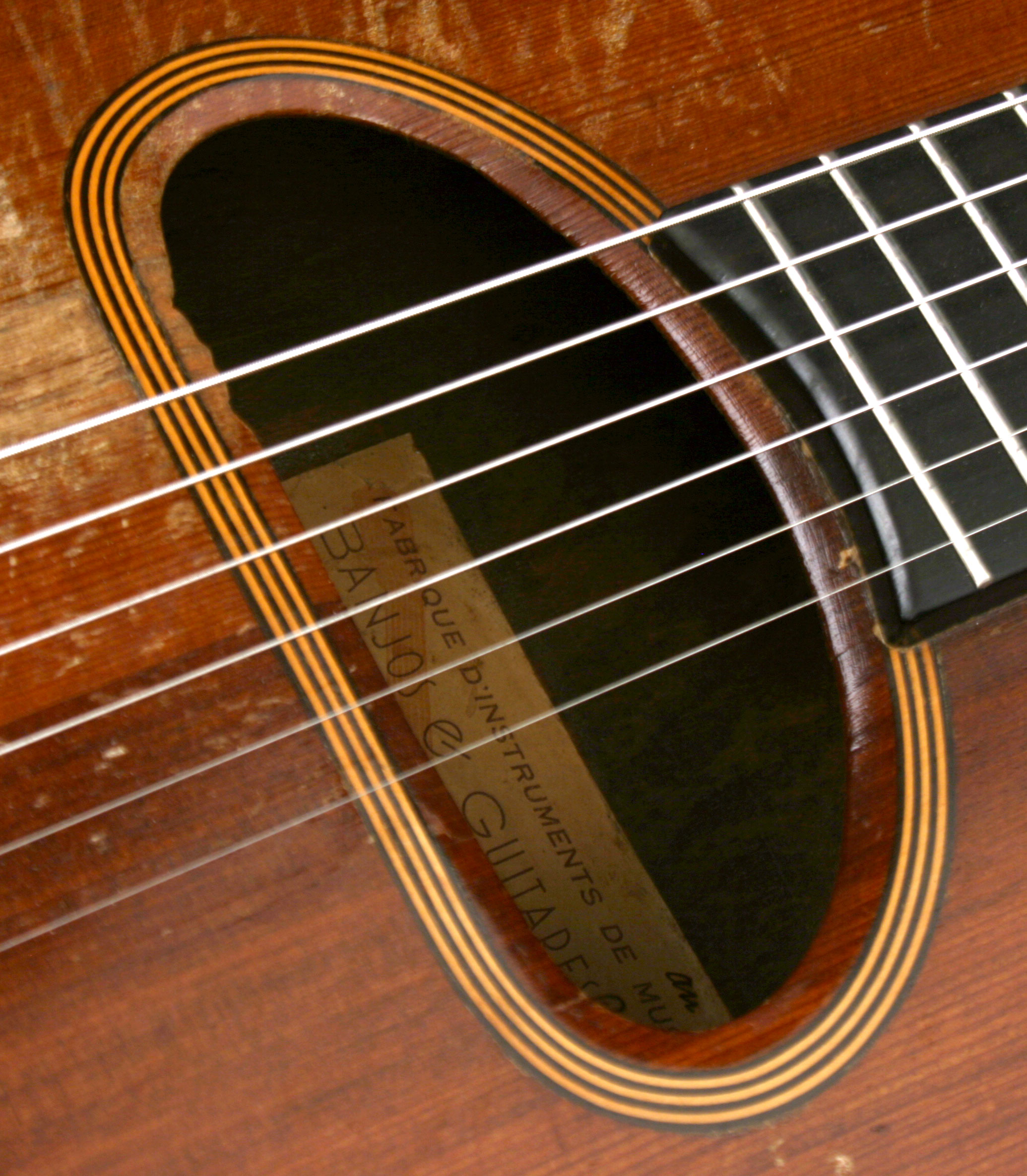 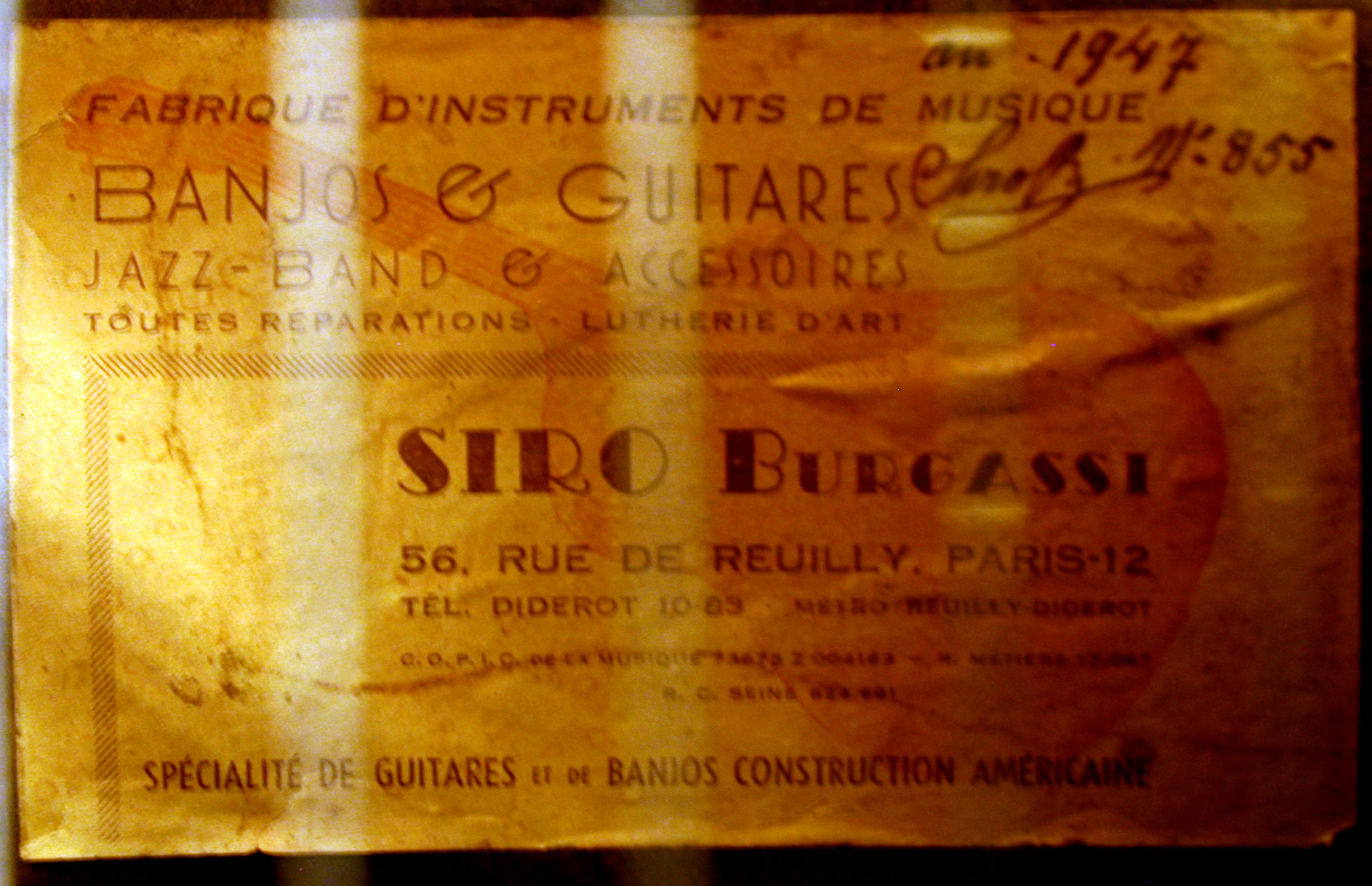 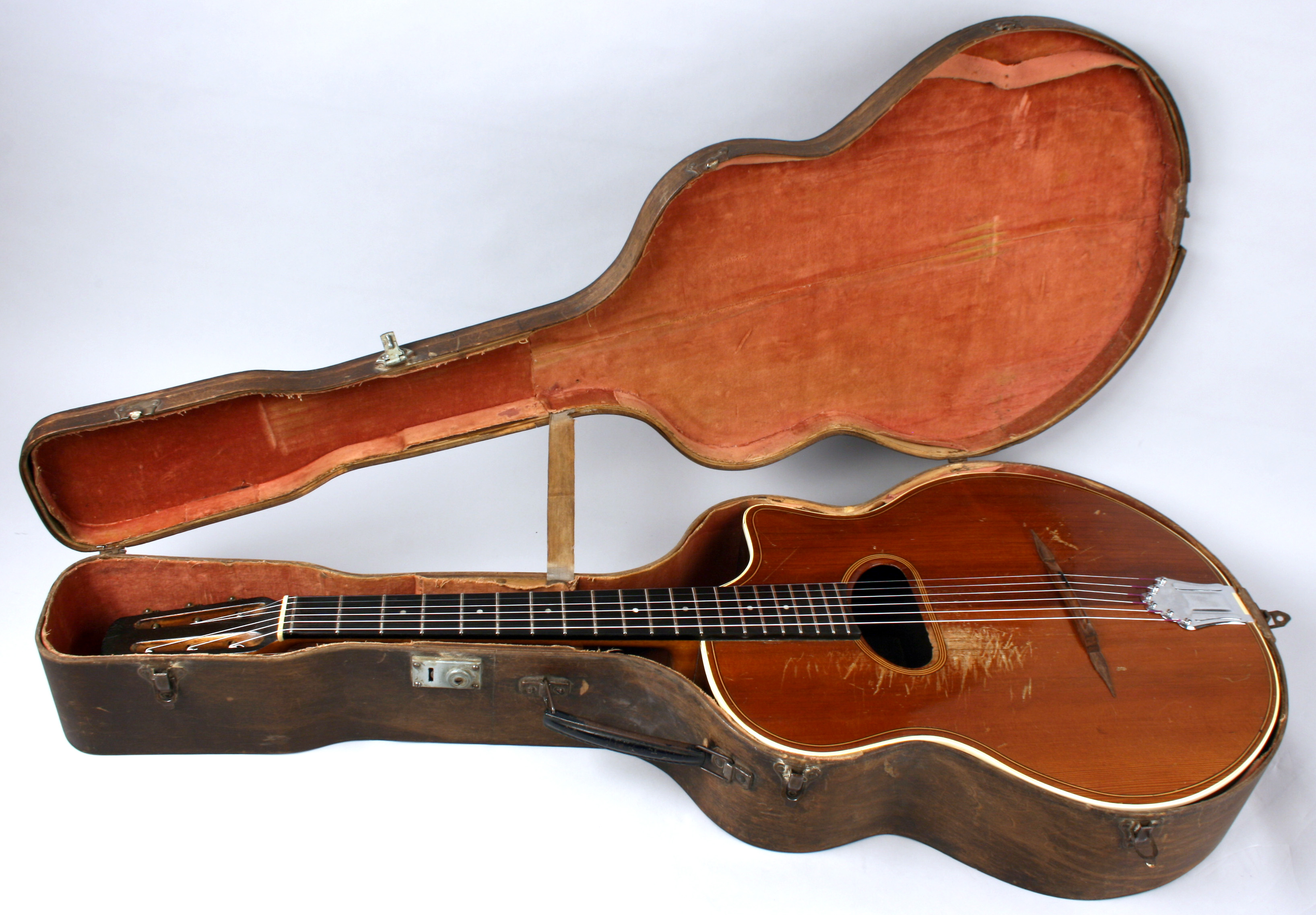 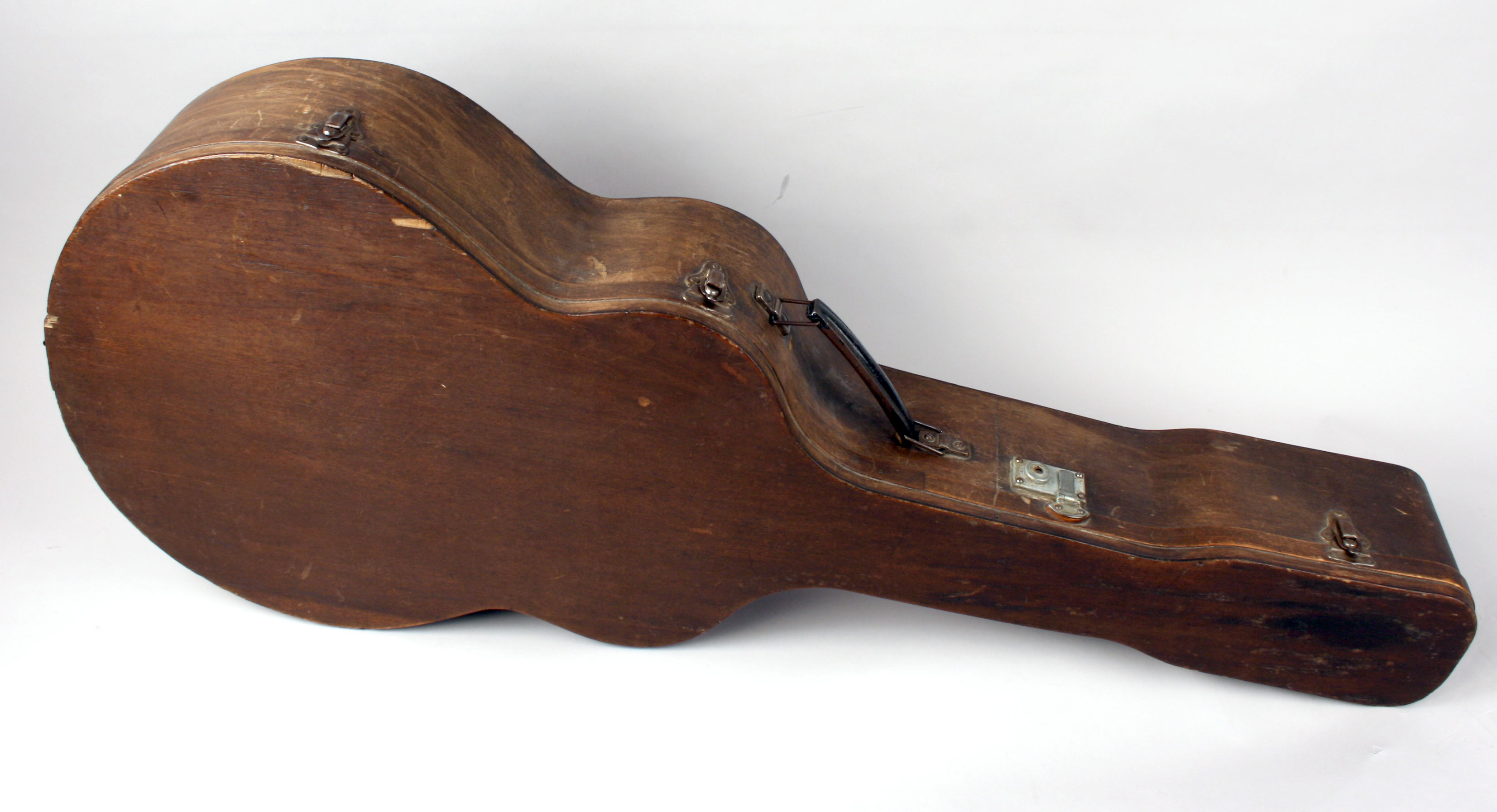 Siro Burgassi was part of the mass emigration of master Sicilian luthiers (Di Mauro, Oliveri Anastasio, etc) who left Catania in the early 20th century. In the 1930s Burgassi and his countrymen setup a series of shops on the East side of Paris and quickly adapted their skills to making jazz guitars in the Selmer Maccaferri style. Burgassi worked as banjo neck maker for the legendary luthier Bartolomeo Busato. Burgassi later went on to produce instruments in collaboration with another of Busato's proteges, Gino Papiri. They constructed many banjos, some very ornate, which bear the "SG" logo on the headstock. Papiri, who was the father in-law of Jacques Favino, later worked at the Favino workshop. Burgassi continued to build under his own name, earning a reputation as one of the most creative and innovative lutheirs from the Golden Era of Franco-Italian luthiere.

Burgassi guitars are as rare as they are beautiful. This well preserved example features a number of unique and innovative design features. The proportions are unlike any other Gypsy guitar: the lower bout spans a wide 17", the 12 fret neck has a 660m scale, and the nut width is 1 11/16". The rich, deep color of the redwood top is beautifully embellished by invoroid binding and the offset purfling. The Brazilian rosewood back is bent a la Busato, however it flattens out near the rims giving it a unique contour. Burgassi's skill is evident in the guitar's interior which consists of a meticulously constructed four brace design with a combination of kerfed and solid lining. The mahogany neck is particularly well crafted, with an elegantly carved volute (a reinforcement behind the nut, more common on old Martin guitars) and an attractive rosewood heel cap. The tuners are original. Burgassi guitars usually had trapeze tailpieces. This guitar now has a more modern nickel Selmer type tailpiece. Compared to Busatos, which were clearly built quickly with many of the finer details overlooked, this Burgassi shows a level of craftsmanship and care that was uncommon in this era. It's a testament to Burgassi's experience and dedication to quality.

We're lucky that Burgassi actually numbered and dated his guitars (Selmer was the only other French Gypsy guitar manufacturer to do this at the time.) This guitar bears the number 855 and was produced in 1947. Additionally, the original case is included (an extreme rarity for a guitar from this era) which is fortunate as the unique body proportions of this instrument would make it unsuited for standard cases.

The instrument has been beautifully preserved over it's long life. There is a fare amount of pickwear and small dings on the body. It is free of any serious damage but does have one small cleat under the fingerboard for reinforcement. The fingerboard is new and the frets have very little wear.

Guitars of this age generally posses a maturity of tone that cannot be produced by newer guitars. This wonderful Burgassi is no exception as it's tone is clear and satisfying with the sort of personality and character that only age brings. The bass response is particularly impressive! The extra large 17" body generates a monstrous low end, enhancing the frequency response to the point that this instrument is a veritable one-man orchestra. The treble range is warm and soothing, producing mellifluous lead lines and beautifully complex chords. Every time I sit down and play this enigmatic guitar, it shows me something new and wondrous. It's not just an instrument, but an adventure!