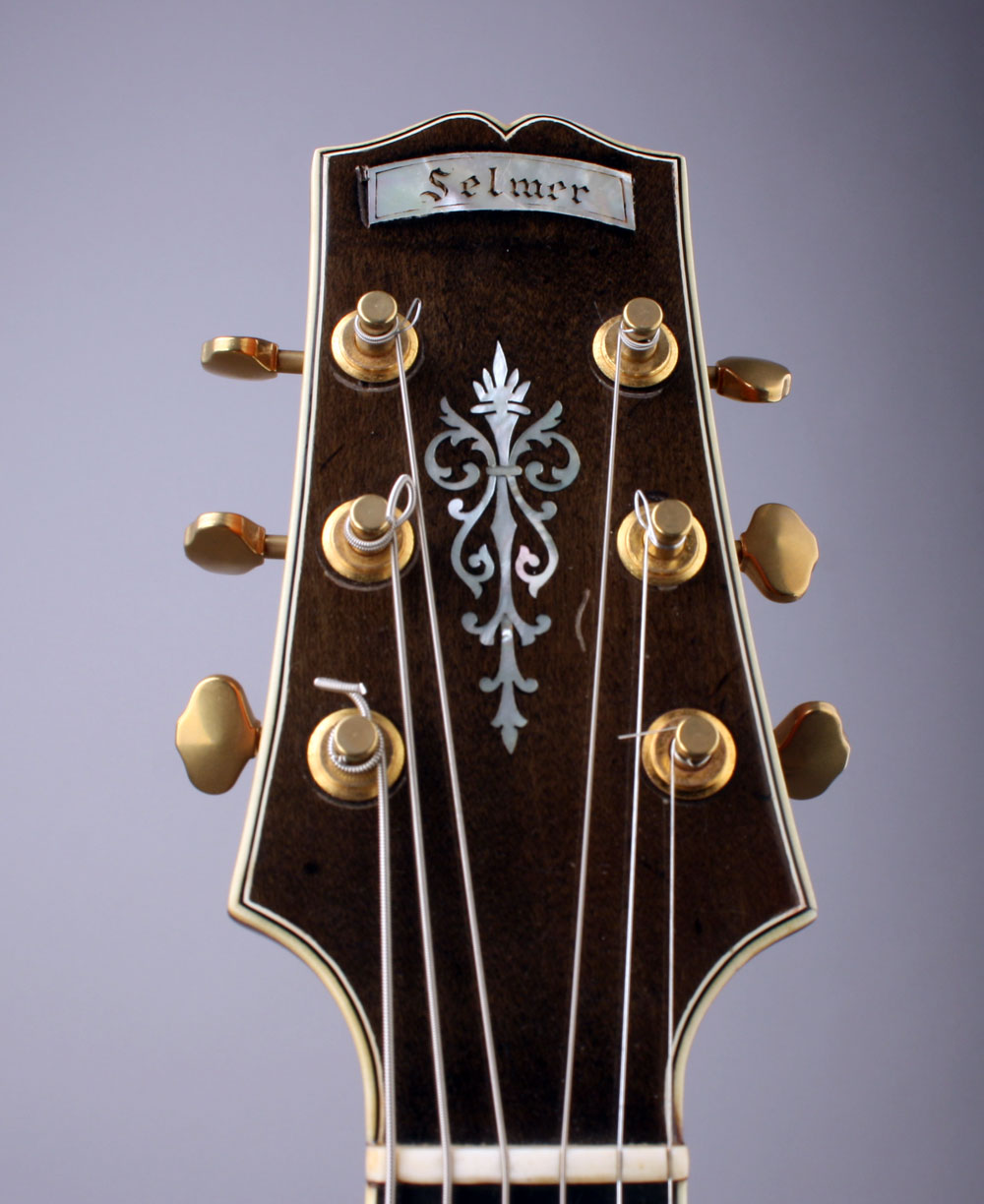 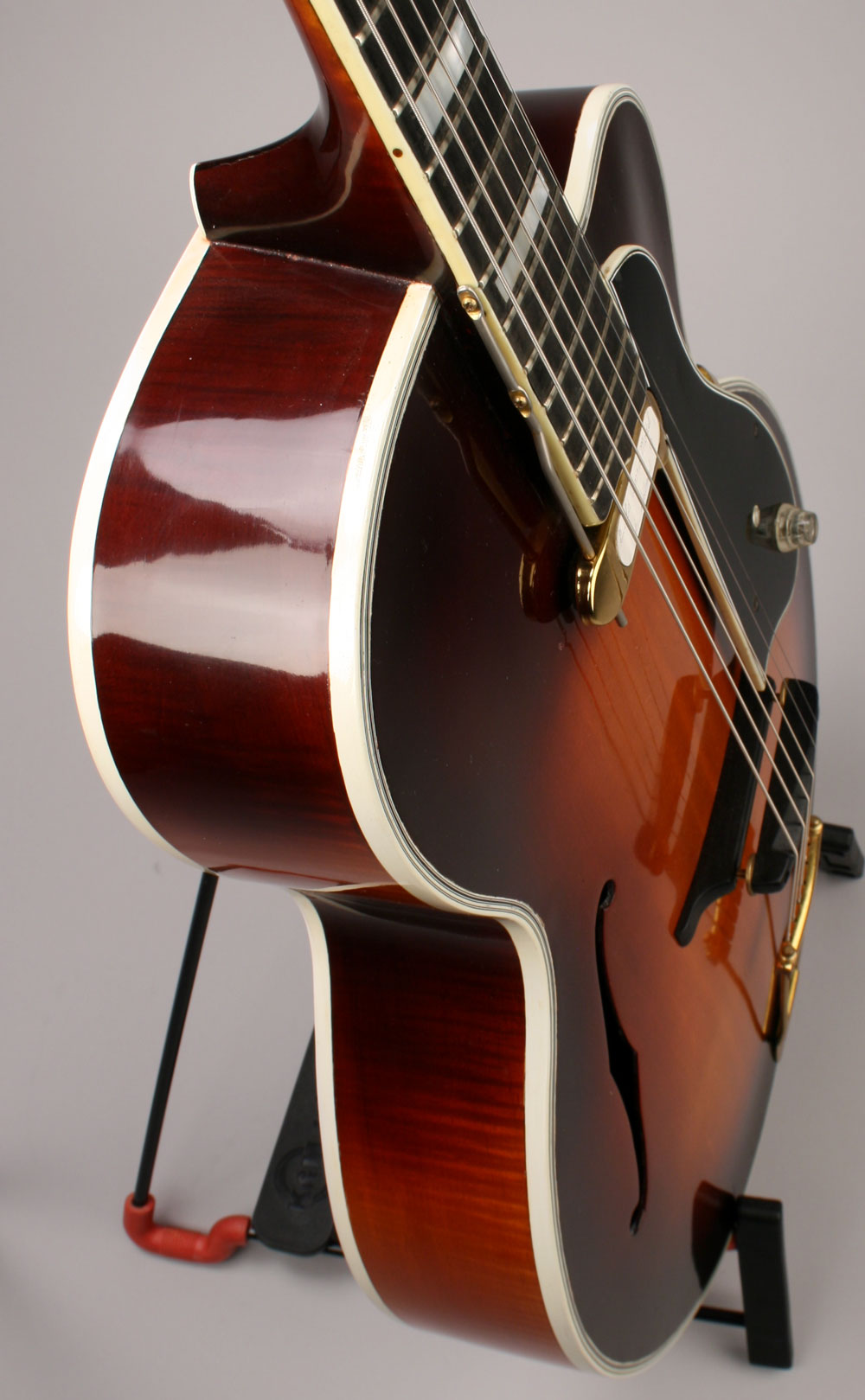 This exceptional archtop guitar was built by the legendary NY based luthier John D'Angelico (1906-1964.) The son of Italian immigrants, D'Angelico inherited the great Italian string instrument making tradition that produced some of the world's best luthiers (i.e. Jimmy D'Aquisto, John Monteleone, Bob Benedetto, Mario Maccaferri, Jacques Favino, B.Busato, etc.) Active during the golden era of jazz, D'Angelico helped to perfect the uniquely American archtop guitar to meet the demands of its role as a rhythm, and later lead instrument, in the jazz bands of the day. Nearly fifty years after his death, D'Angelico remains the preeminent figure in the history of archtop guitar making. His instruments are arguably some of the most collectable of all time and his work is still the standard by which all contemporary archtop luthiers judge themselves.

In 1933, the Selmer corporation of Paris contracted D'Angelico to produce guitars under their name. Selmer was already producing their own jazz model designed by another legendary luthier, Mario Maccaferri. While well suited to the needs of the European string based jazz style of musicians like Django Reinhardt, the bent top Selmer Maccaferri design never caught on among American jazz men who favored the sound of the carved top archtop guitar. Presumably Selmer realized this, consequently seeking out D'Angelico to produce guitars which would be appropriate for the North American market. This instrument is the last of three that were constructed during this arrangement, and is the only known surviving example.

This instrument, which was built in D'Angelico's workshop located in New York City's Lower East Side, is a fine example of his early work which was based on Gibson's revolutionary L5 model archtop. D'Angelico used the same headstock shape, scale length, and parallel bracing pattern as the L5, but expanded the lower bout to 16 1/2". This instrument is typical of his production from the early 30's, closely resembling models which are often designated as "Model A." Features include a "vine and torch" peghead inlay, unbound F holes, tapered "snakehead" headstock, block fingerboard inlays, and a trapeze tailpiece.

This guitar was originally constructed without a cutaway but, according to documentation from Mandolin Brothers, had one added later in its life by D'Angelico himself. The modification was done seamlessly with no visual evidence of the work. Additionally, a much lauded DeArmond Rhythm Chief 1000 pickup was installed. It is the "Guild Award Model" and is labeled as such on the pickup itself. A volume knob and mini jack were installed on the pickguard.

Sonically this guitar is a pure gem! Built in the pre-electric era, this instrument was constructed to achieve the best possible acoustic tone and projection. So many later archtops were intentionally overbuilt in attempt to reduce feedback while amplified, which has the unfortunate side effect of rendering the instrument almost completely useless in acoustic settings. This is not the case with this 1930's design which is unusually lightweight and resonant. Like most archtops, rhythm playing is clear and focused which is precisely what the big band rhythm players of the day needed. But surprisingly, this guitar is also an exceptionally good lead guitar. One can only wonder if the Selmer logo inspired D'Angelico to build something that was better suited to the spitfire leads of Django Reinhardt rather than the muscular rhythm work of Freddie Green. With a modern, ultra low 2mm action setup this guitar can still produce snappy, cutting single note lines that will allow it to function well in most acoustic settings. Clarity is further enhanced by the dry, direct quality of the tone which is completely free of any irritating echo or overtone ringing. These qualities are rarely found in guitars less than forty years old. I'm also partial to the midrange thickness and complexity this instrument possess. Lead lines are quite thick and luscious in character while the bass register is well contained and "tight."

The condition is very good with some light scratches and dings on the body, most notably on the top near the cutaway. At some point a small crack on the back was repaired. The frets are in good condition with only minimal wear. The tuners were replaced with a vintage open back set. Generally, this instrument looks as if it was very well cared for as it has only a fraction of the wear you'd expect for a guitar of this age.