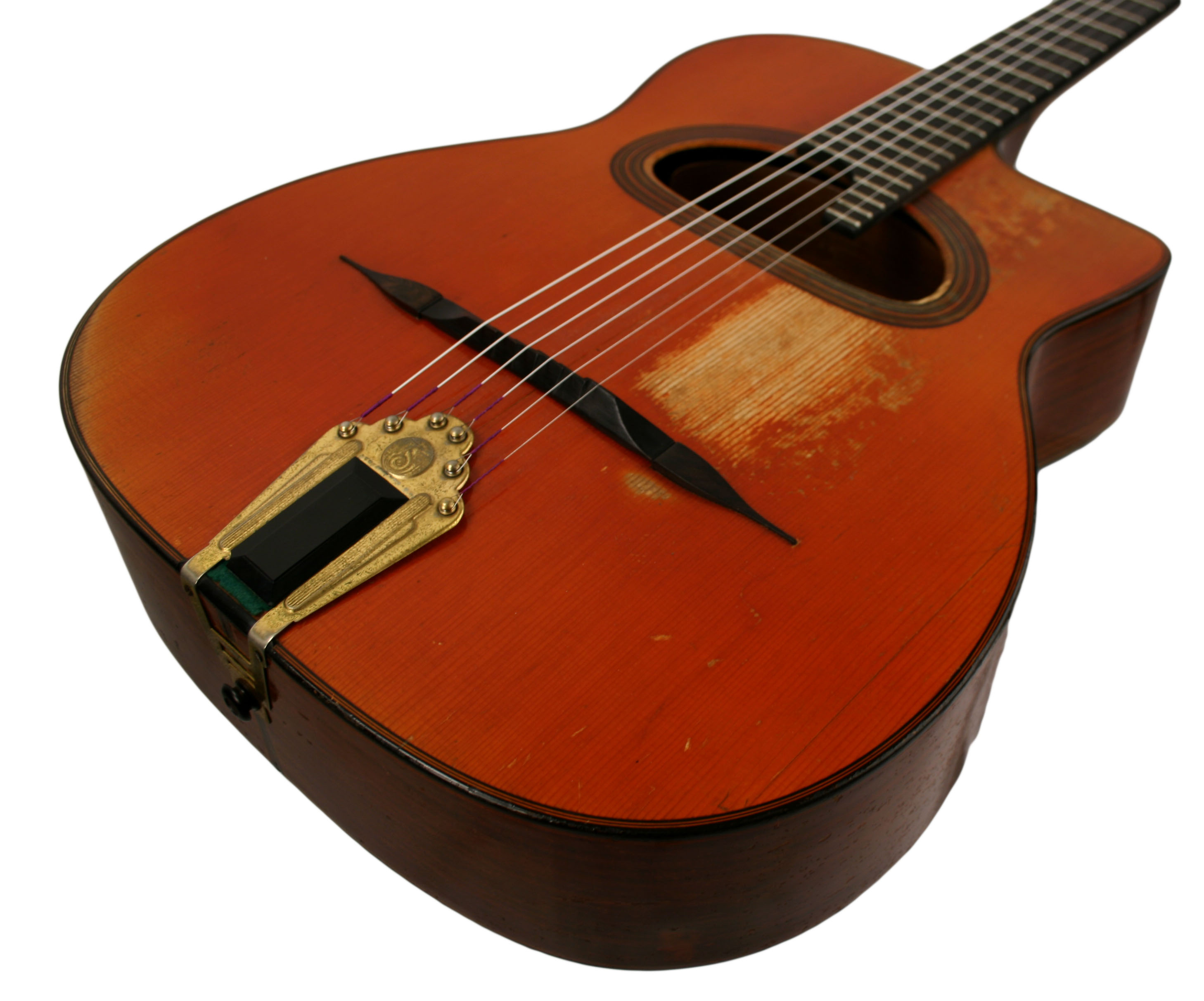 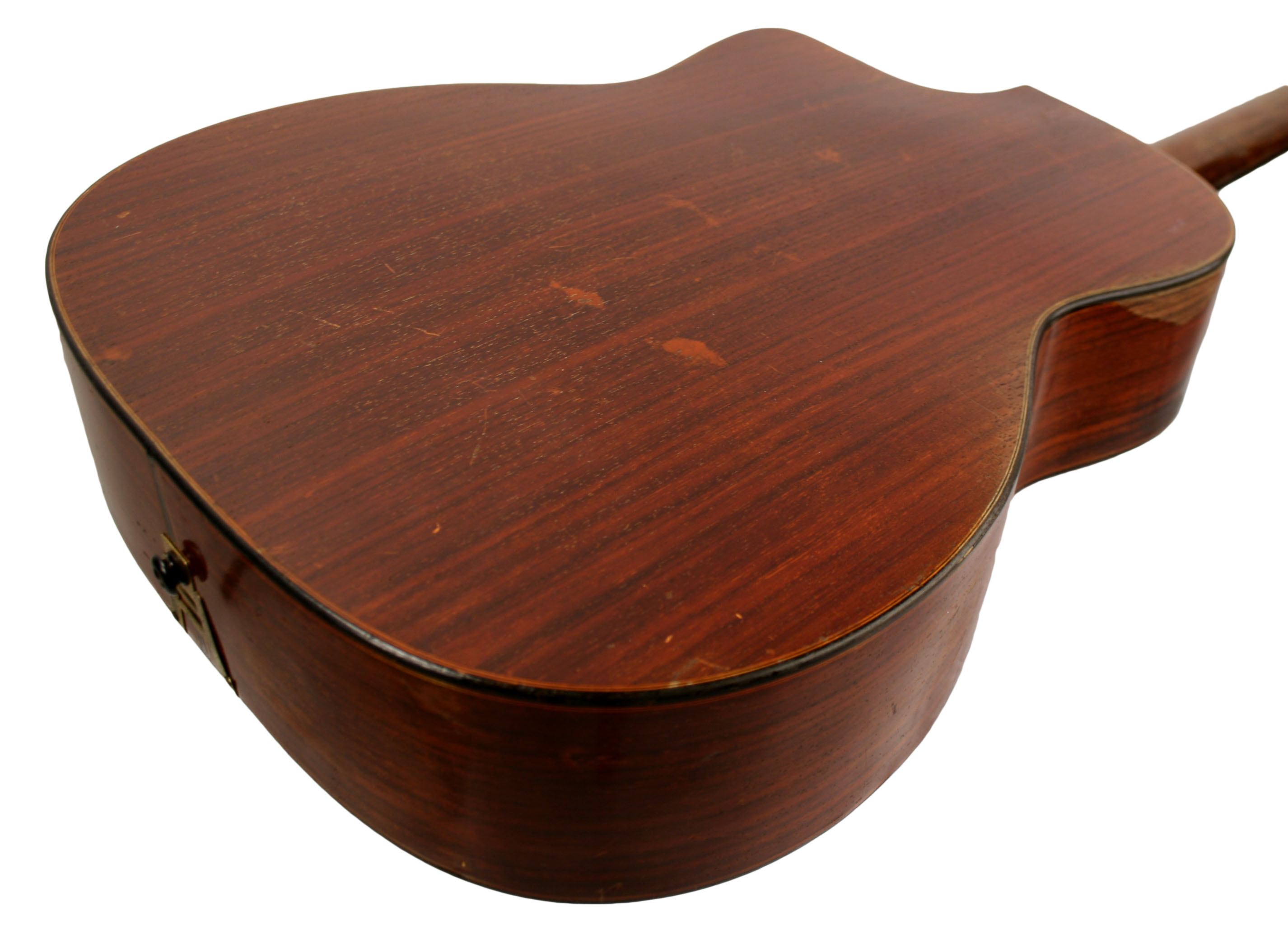 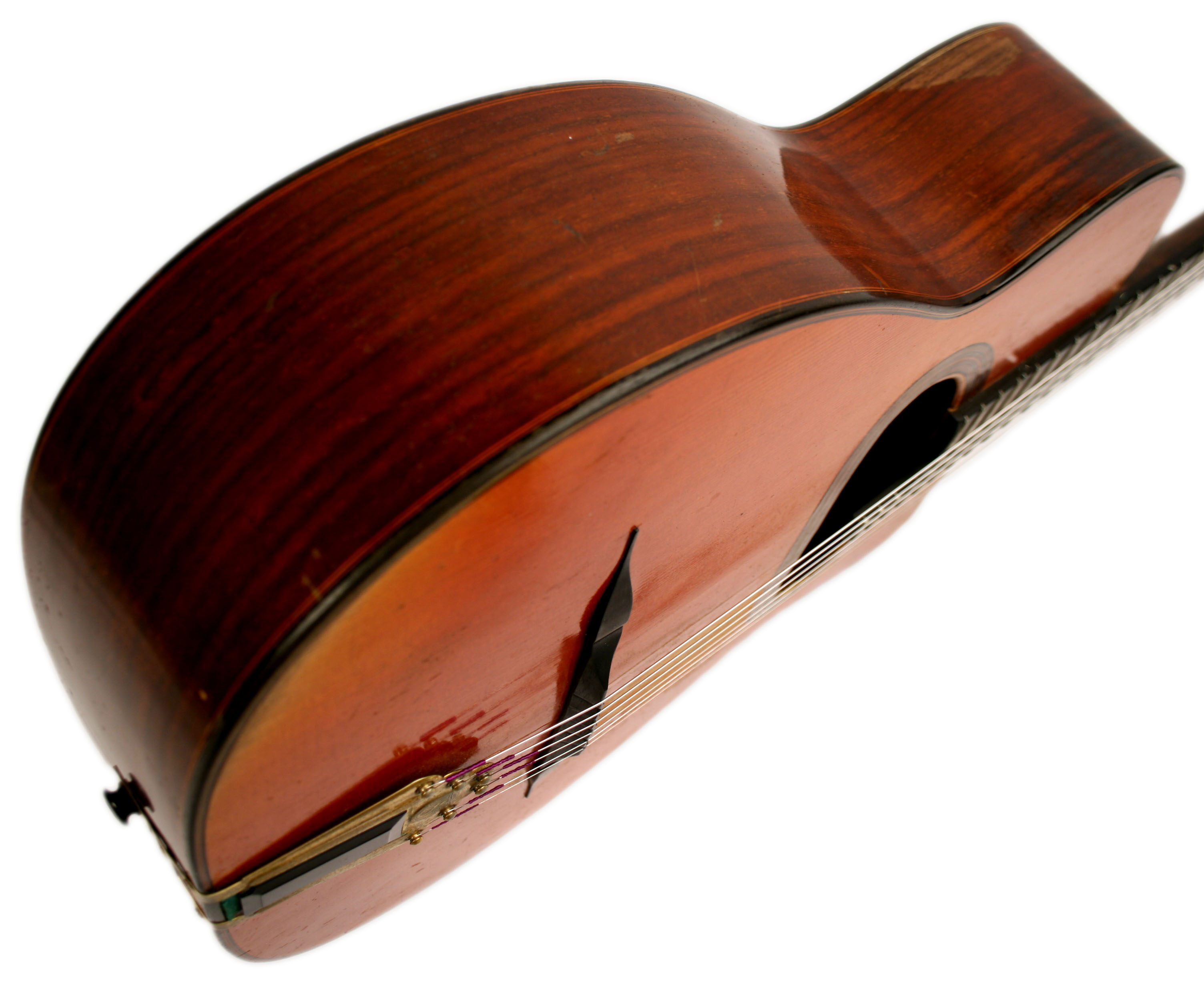 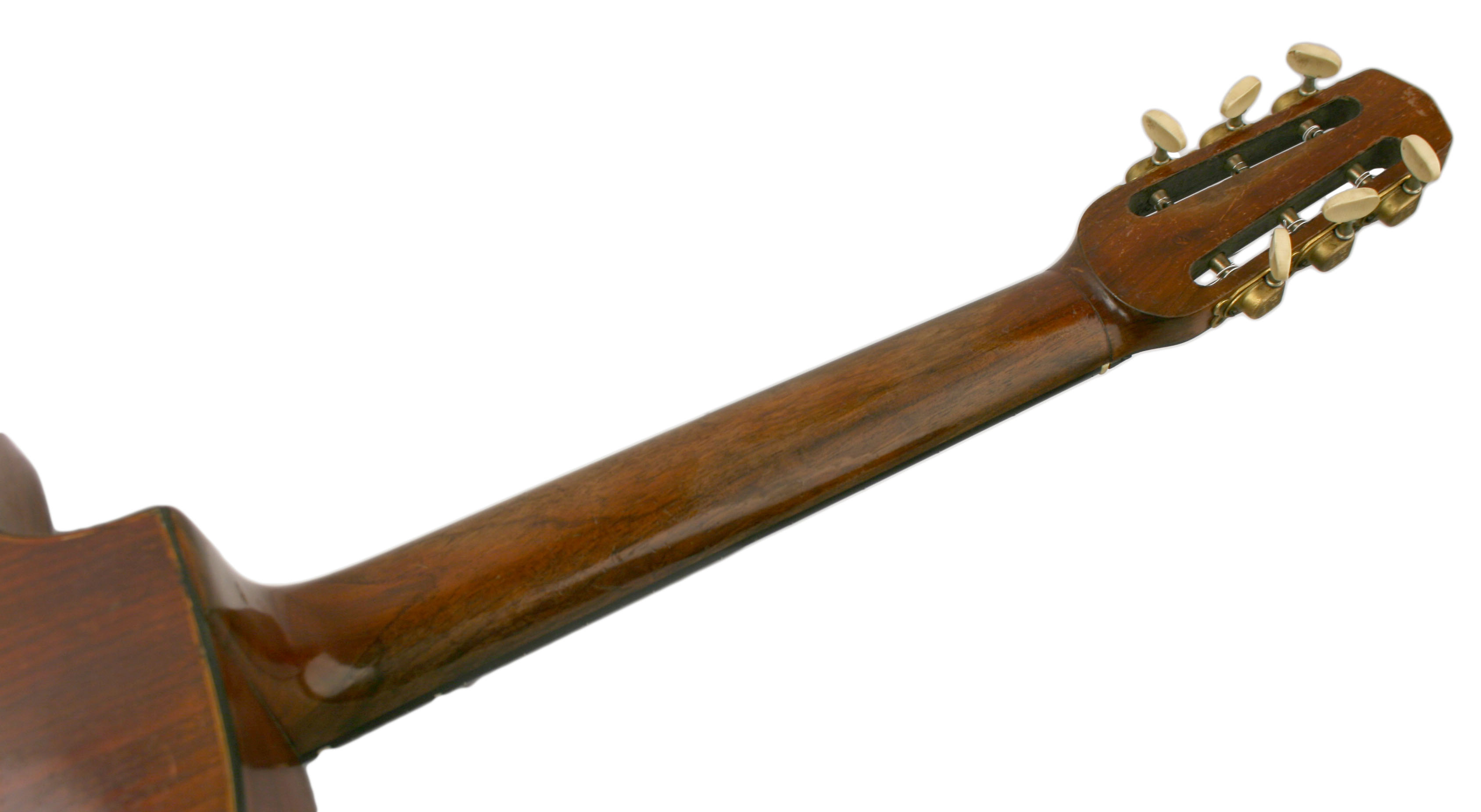 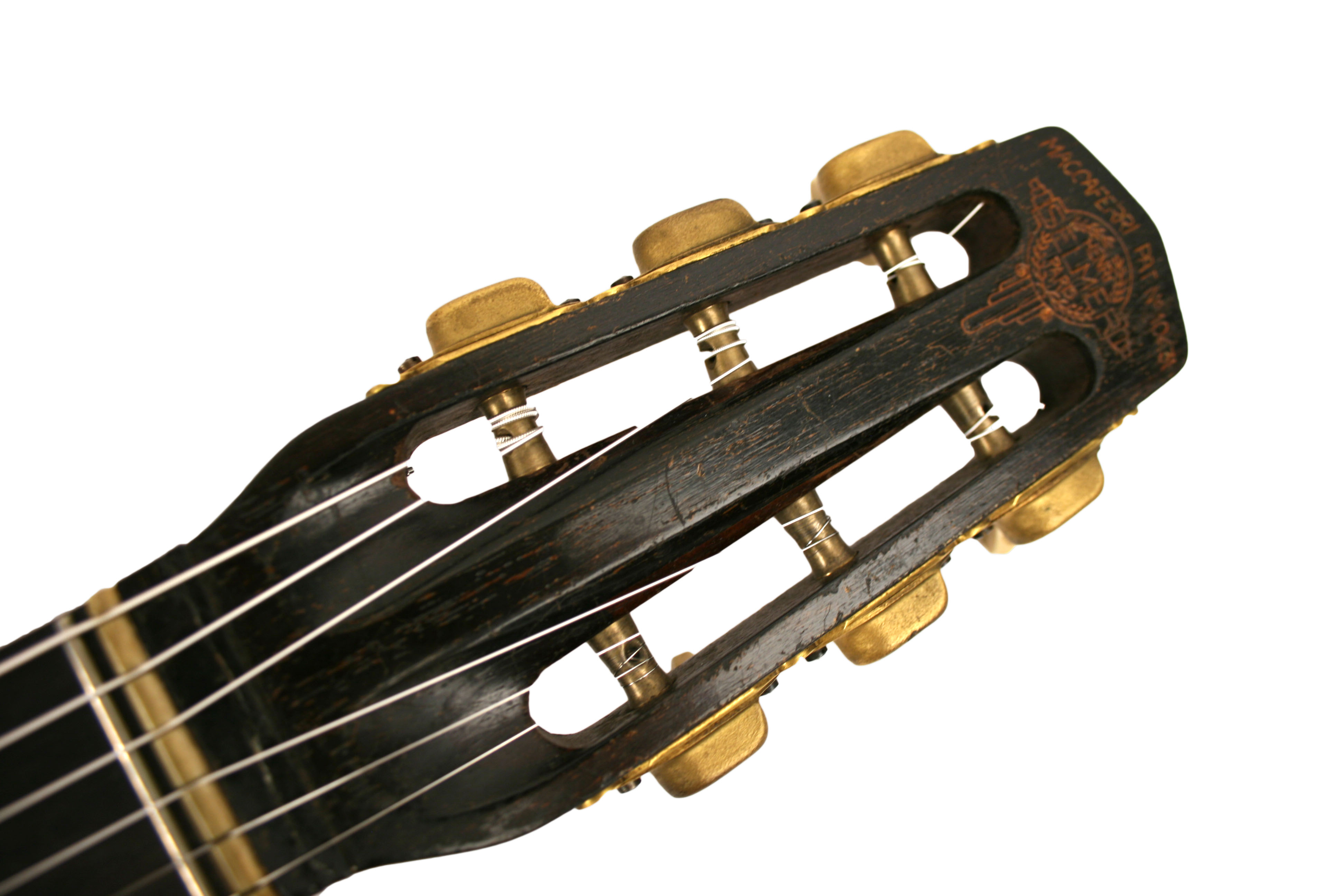 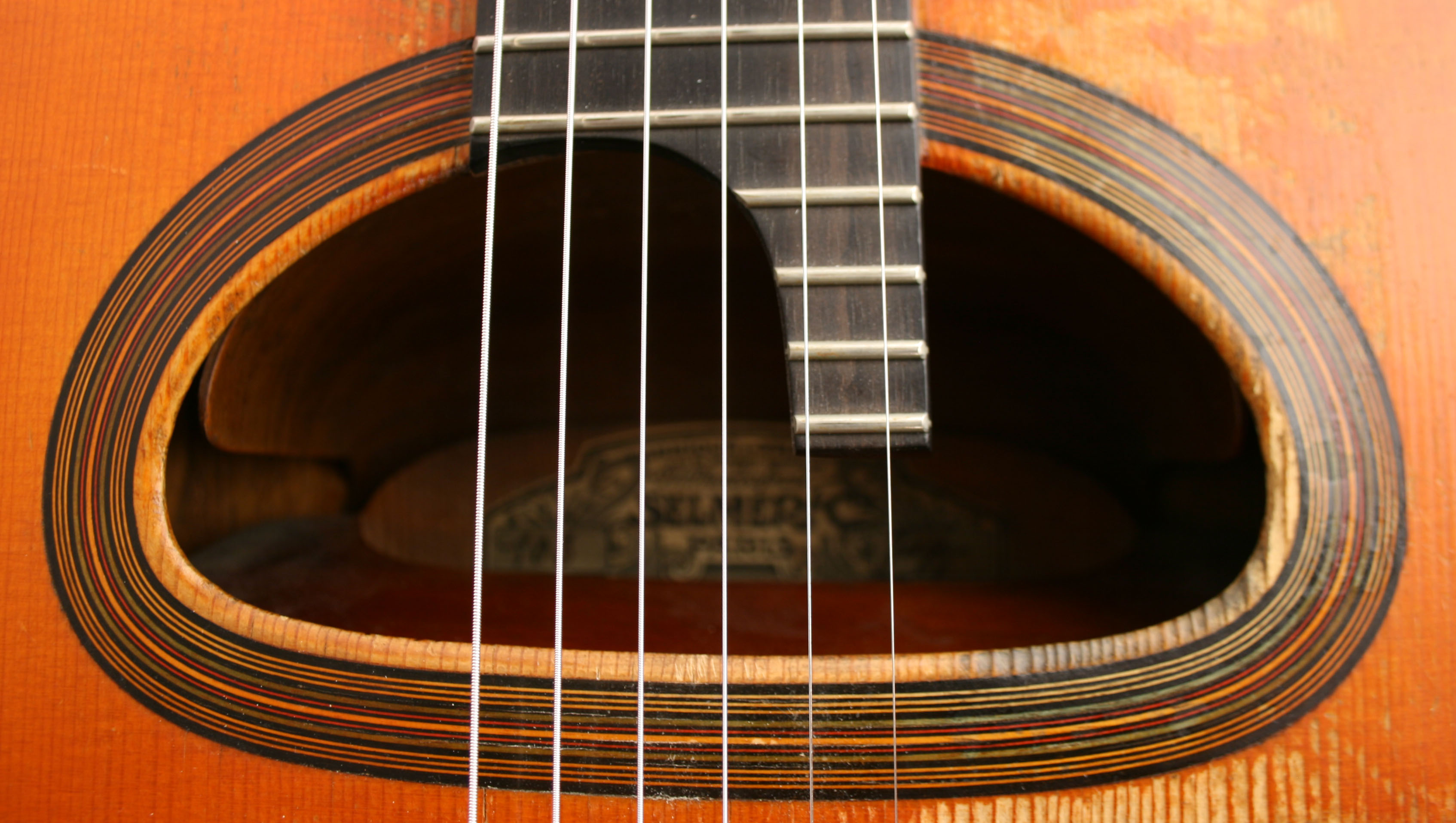 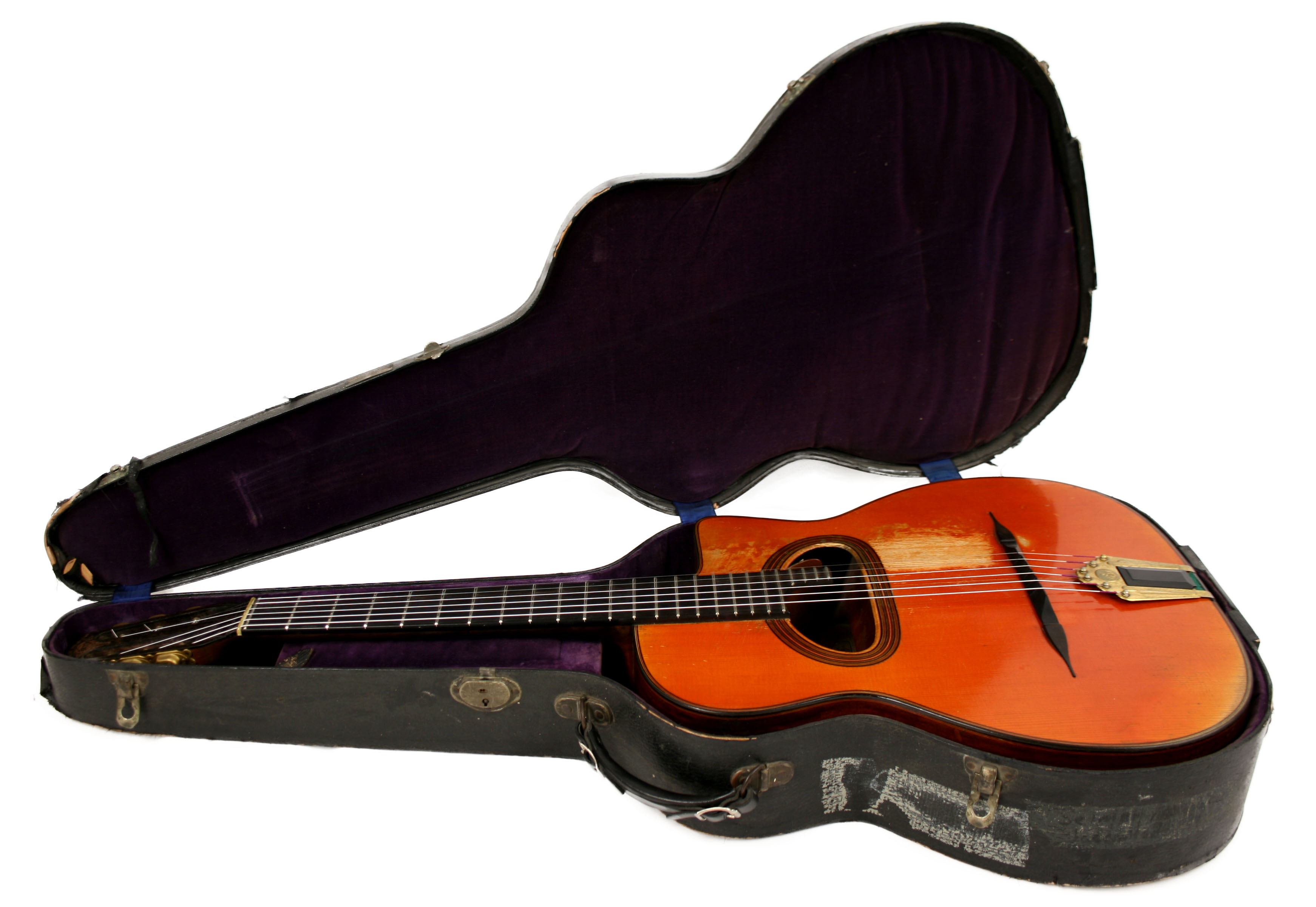 This is it...the guitar that started it all, an original 1932 Selmer Maccaferri in astounding condition! This pristine example is one of the very, very few surviving examples from the first year of production which was overseen by Mario Maccaferri himself (he left Selmer a year later.) Only a handful of guitars from this era are known to exist.

The Selmer log book adds a bit of intrigue: it shows that this guitar was a Guitare Hawai.Selmer Maccaf. completed on December 1st, 1934 and sold to Calazel of Montpeiller. However, this guitar shows no sign of ever being a Hawaiian model. There are none of the tell tale signs of a conversion, with everything being exactly as it should be for a Jazz model. Additionally, all the guitars with similar low 100 serial numbers were built in 1932, not 1934. The headstock bears the patent number 10.431 which was only used on guitars built in 1932. Later guitars had the 376.338 number. Additionally, the label is one of the very few that specifies this is as a Jazz model (most of the labels used the name Orchestra). Because it is from the first year of production, Mario Maccaferri's name is visible on both the headstock and the label. On later guitars Maccaferri's name no longer appears on the headstock and is blotted out on the label. So we can only assume that the entry in the log book is an error (of which there are many.)

This guitar was once part of the legendary Scott Chinery collection. Chinery built one of the biggest and most celebrated guitar collections of all time. He was known for having only the best examples of classic guitars, and this excellent piece was his choice to represent Selmer. This guitar was used by Martin Taylor on a CD that Chinery funded titled Masterpiece Guitars.

This guitar is featured in the book, The History of the American Guitar by Tony Bacon on pages 88-89.

The condition of the guitar is very good. There is only one crack in the lower bout that appears to only be a surface crack. There is some slight separation on both sides of the soundhole. It is now gone but some of the finish was taken with it. The guitar has small dings and checking here and there, but overall all it looks very sharp for it's age. The nearly impossible to find original Pegamoid case is included! It is a little beat up but still functional. The handle is gone, one of the latches is broken as well as one of the hinges.

Nearly everything on the guitar is original with the exception of a strap peg, side dots, and a refret. Even the bridge appears to be original which is a miracle! The tuners look almost new and turn perfectly. So many of the original Maccaferri's had their resonators removed. This one is untouched and secure. Also, despite the added weight of the resonator, this guitar is still very light at only 4.1 lbs.

The action is very low, around 2.2mm. Extremely easy to play although if you play with a lot of force you'd have to raise the action somewhat.

In additional to the original Pegamoid case, a BAM flight case is also included.

The sound is fabulous! The word that best describes it is rich in tone. There's just something special about 12 fret guitars and this is no exception. There is a beautiful complexity to the sound, especially when playing chords which just swirl with all kinds of interesting harmonics that make other guitars seem dull and lifeless by comparison. So many contemporary D holes, especially 12 fret ones, are far too bass heavy and wet sounding. This guitar is surprisingly snappy for leads with just enough low end to make rhythm work full and satisfying. It's what a Gypsy guitar should be!