Sam Miltich and the Clearwater Hot Club Some of These Days

Sam Miltich and the Clearwater Hot Club Some of These Days 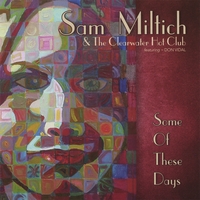 Follow Us Follow Us Follow Us Follow Us
Submit a Review
Sam Miltich and the Clearwater Hot Club Some of These Days
Featuring guitarist, Sam Miltich, and saxophonist, Don Vidal, "Some of These Days" includes traditional American jazz, a Brazilian choro, and a French mussette in the style of Django Reinhardt.
Michael Dregni, author of "Django Reinhardt and the Illustrated History of Gypsy Jazz" (Speck Press,2006) wrote, “Sam Miltich was just eighteen when he first appeared on the jazz scene, playing guitar as if he was channeling Django’s spirit…His Minnesota-based Clearwater Hot Club is one of the most exciting and joyful of Gypsy bands anywhere.”
The Grand Rapids, Minnesota based Clearwater Hot Club was formed in the summer of 2003. The following November they released their first album, "Sammo". The group released a second CD in 2004 entitled "May Rain". Since that time, the Clearwater Hot Club has toured in the U.S., Canada and Japan including appearances at Django Fest Northwest and at the Ginza International Jazz Festival in Tokyo, Japan, with Connie Evingson. Sam has also played with Paul Mehling and the Hot Club of San Francisco, and was part of Amoeba Music’s “Gypsy Caravan" tour with David Grisman and the Robin Nolan Trio. Sam has also toured with violinist, Randy Sabien,and performs with Peter Ostroushko.
Since releasing their last CD, "May Rain," Clearwater Hot Club lost their band-mate and song-writing collaborator, violinist, Raphael Fraisse, to leukemia in May 2006. The CWHC began to perform with saxophonist, Don Vidal, music educator, member of Mr. Pumpkinhead, and the Grand Rapids Community Big Band. "Some of These Days" showcases Don Vidal’s versatile saxophone along with Sam’s guitar work. The saxophone and guitar combination is a variation of the “hot club” sound as Django Reinhardt played with horn players when he and violinist, Stephane Grappelli were separated during WWII.
As on their last CD, Sam’s sister, Mateya M. Miltich, created the cover art for the new CD. "Some of These Days" is dedicated to the memory of Raphael Fraisse and the spirit of joy he communicated in his playing.