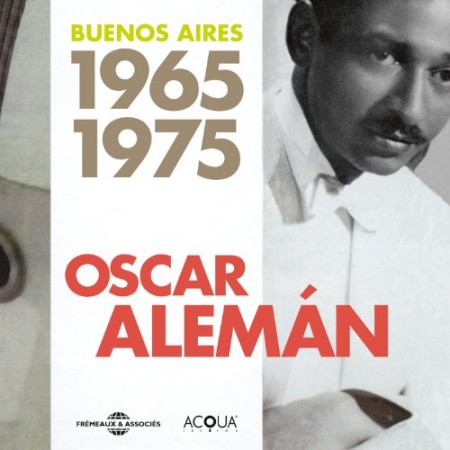 Follow Us Follow Us Follow Us Follow Us
Submit a Review
Oscar Aleman Buenos Aires 1965-1975
The great Argentinian guitarist Oscar Alemán, (1909-1980) is not as well known as Django Reinhardt or Charlie Christian, but he was no less an individual stylist. This wonderful set from Fremeaux & Associes offers proof that even later in life, his powers as an improviser, technician, and bandleader were undiminished. These 19 cuts were taken from two sources: a live date in 1965 with his big band Y Los Cinco Caballeros, and a studio session. The live gig, which comprises the first 11 selections, may be titled in Spanish but is mostly made up of jazz standards radically rearranged and played in Alemán's inimitable, hard swinging, intensely rhythmic style. Check out opener "Guitarra Salvage" ("Crazy Rhythm") and the stellar strut of "Murmullo de Pájaros" ("Lullaby of Birdland") for starters. The fidelity is good mono, but that doesn't detract at all. On the studio session, the band is smaller, far more Latin in approach, and there are standards apart from those of American jazz (though there are some of these as well) and vocals, which add to rather than detract from, the performances. His reading of Dori Caymmi's "Saudade de Bahia," with its seamless meld of samba and swing is a set highlight. Then there's the cooking read of the traditional Cuban tune "O Vestido de Bolero," with its knotty aprpeggios, clave rhythms (played on a snare), and jazz phrasing. The recording quality here is in stereo, but feels unmixed, which is another plus as it adds to the live-in-studio feel. In sum, Buenos Aires 1965-1975 is a welcome addition to Alemán's catalog. ~ Thom Jurek

A wonderful coffee table style biography of the legendary Argentinian guitarist. Rich in detail and full of rare photos. In three languages: Spanish, English, and French.

This film documents Aleman's exciting life and the tragic family history he had to overcome while it recaps the story of popular music in the 20th century.