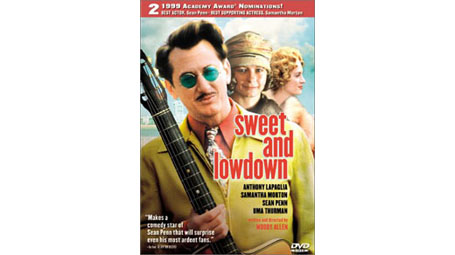 Woody Allen makes beautiful music but only fitful comedy with his story of "the second greatest guitar player in the world." Sean Penn plays Emmett Ray, an irresponsible, womanizing swing guitar player in Depression-era America who is guided by an ego almost as large as his talent. "I'm an artist, a truly great artist," he proclaims time and time again, and when he plays, soaring into a blissed-out world of pure melodic beauty, he proves it. Samantha Morton almost steals the film as his mute girlfriend Hattie, a sweet Chaplinesque waif who loves him unconditionally, and Uma Thurman brings haughty moxie to her role as a slumming socialite and aspiring writer who's forever analyzing Emmett's peculiarities (like taking his dates to shoot rats at the city dump). The vignettelike tales are interspersed with comments by jazz aficionados and critics, but this is less a Zelig-like mockumentary than an extension of the self-absorbed portraits of Deconstructing Harry and Celebrity. The lazy pace drags at times and the script runs dry between comic centerpieces--the film screams for more of Allen's playful invention--but there's a bittersweet tenderness and an affecting vulnerability that is missing from his other recent work. Shot by Zhao Fei (The Emperor and the Assassin, Raise the Red Lantern), it's one of Allen's most gorgeous and colorful films in years, buoyed by toe-tapping music and Penn's gruffly charming performance.