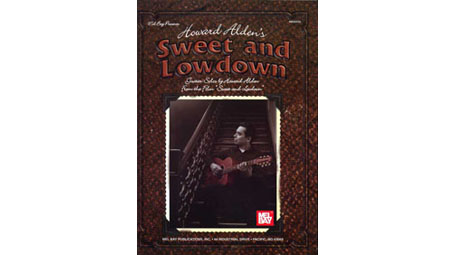 Follow Us Follow Us Follow Us Follow Us
Submit a Review
Howard Alden Sweet and Lowdown
Sweet and Lowdown, Woody Allens film from 1999, starred Sean Penn as the legendary, but fictitious jazz guitarist of the 30s, Emmett Ray. Emmett considered himself to be the second greatest jazz guitarist in the world next to Django Reinhardt. The versatile Howard Alden played all of the solo acoustic guitar parts for the movie, as well as coaching Mr. Penn to play guitar for his role (for which he received an Oscar nomination, best actor). This book contains note-for-note transcriptions in both standard notation and tab of Howards Django-esque interpretations and improvisations of classic standards of the 1930s, as well as original solo guitar pieces written by Woodys longtime musical director, jazz pianist Dick Hyman. Sweet and Lowdown contributed greatly to the recent renewal of interest in and revival of swing and gypsy jazz guitar. Howards guitar work is a warm and personal example of the timeless musical vocabulary of swing guitar. 80 pages.