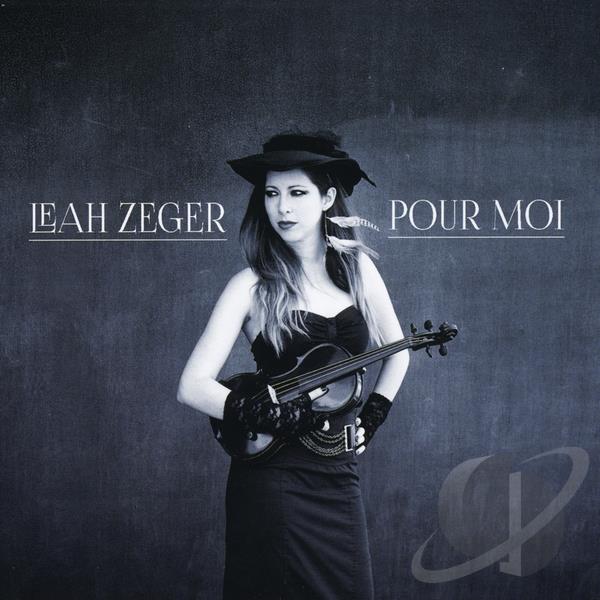 Follow Us Follow Us Follow Us Follow Us
Submit a Review
Leah Zeger - Pour Moi
Leah Zeger is a classically trained violinist with a degree in Opera Performance from the University of Texas. However her career has been quite versatile and eclectic, stretching beyond classical music and performing with the Austin Symphony Orchestra into jazz, flamenco, bluegrass, folk rock and World Music. In addition she sings with quiet feeling and has a haunting voice.
Pour Moi features Zeger performing brilliantly in a variety of idioms, most of them jazz-oriented. Seven of the 14 selections team her violin and voice with the great gypsy guitarist Gonzalo Bergara and usually rhythm guitarist Jeff Radaich and bassist Brian Netzley. “Embraceable You,” normally a ballad, is given one of its most uptempo rides and “The Man I Love” is turned into a sly bit of dance music with a lengthy closing vamp. Other performances by this group include Django Reinhardt’s “Heavy Artillery,” “Dos Gardenia Para Ti” which is a vocal piece with a tango rhythm, a second and more straightforward version of “The Man I Love,” and “J’Attendrai,” a worthy obscurity that was performed on film by Django Reinhardt and Stephane Grappelli in 1937. Throughout these performances, Ms. Zeger plays superb violin and often adds a memorable vocal.
Leah Zeger is also featured on classical and folk melodies including the uptempo “March Hora,” “Caie Sukarije,” and “Czardas” which features her playing impeccably through several tempos in a performance worthy of Eddie South. “I Fall In Love Too Easily” is given a brief and lovely version on which Leah’s voice is accompanied by guitarist Dan Cole. Three other standards find her joined by Cole and bassist Hamilton Price including “You Only Live Twice” from a James Bond film. Finally there is a pretty a cappella vocal version of “Neverland” on which, through overdubbing, she creates a vocal choir.
Pour Moi is a consistently impressive and spirited release by Leah Zeger, a violinist and a singer who is well worth discovering.