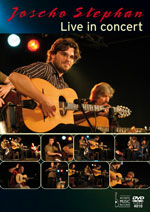 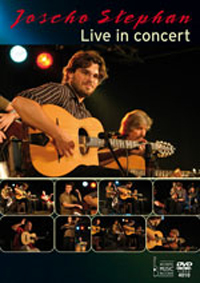 Hardly any guitarist today reaches the summits of gypsy swing the way Joscho Stephan does. With his authentic tone, his harmonic refinement and sense of rhythm, but above all, with his explosive solo technique, this master guitarist from Mönchengladbach is considered the “future of gypsy jazz guitar” and the legitimate successor to the throne once held by the legendary Django Reinhardt. For the first time, the audience can experience on DVD all the facets of Joscho Stephan’s expressive guitar playing close-up. The 27-year-old virtuoso always reveals his sense of tradition, and he will, on occasion, squeeze out a contemporary pop quotation to feed his instrumental pyrotechnics. For this recording, Joscho Stephan invited the American fingerstyle virtuoso Richard Smith as a surprise guest to a fascinating duet. One version of “Les Yeux Noirs” and an extensive interview with Joscho Stephan and Richard Smith in the bonus section complete this unusual concert experience.