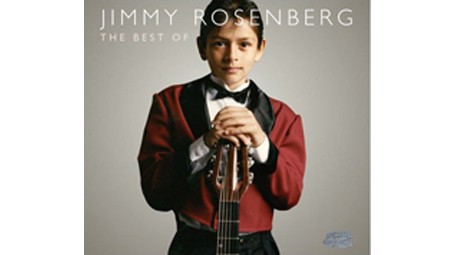 This is really an unusual CD - one of the best accoustic guitar players in the Django Reinhardt school, ever! Jimmy Rosenberg comes from a Sinti family in Asten, in the southern Netherlands, the son of Papi (mother) and Macky Rosenberg. He made his debut outside the gypsy world as early as in 1989, clearly inspired by Stochelo Rosenberg, in John Jeremy's British television documentary Django's Legacy. There Jimmy appeared with the trio named The Gypsy Kids, which later became Sinti. Jimmy made his mark as a notable guitarist early. At the age of 13 he had already played with all of the greats, from Stochelo, Dorado, Jo Privat and Philip Catherine to Bireli Lagrene and Stéphane Grappelli. At the same time he made his first recording for HCR, the incredible Jimmy's Suite. The subsequent year brought new record contracts for Sinti, and concert tours to Oslo, Paris, New York, and throughout the United States, all thanks to their mentor, Hans Meelen. Recently, Jimmy Rosenberg has recorded with Babik Reinhardt, Hot Club de Norvčge, Romane, Bireli Lagrene, Angelo Debarre, and Frank Vignola. Still very young, Jimmy Rosenberg is obviously one of the most promising talents in the gypsy jazz today. – Jon Larsen
Receive an in stock email notification for this item as soon as it becomes available.