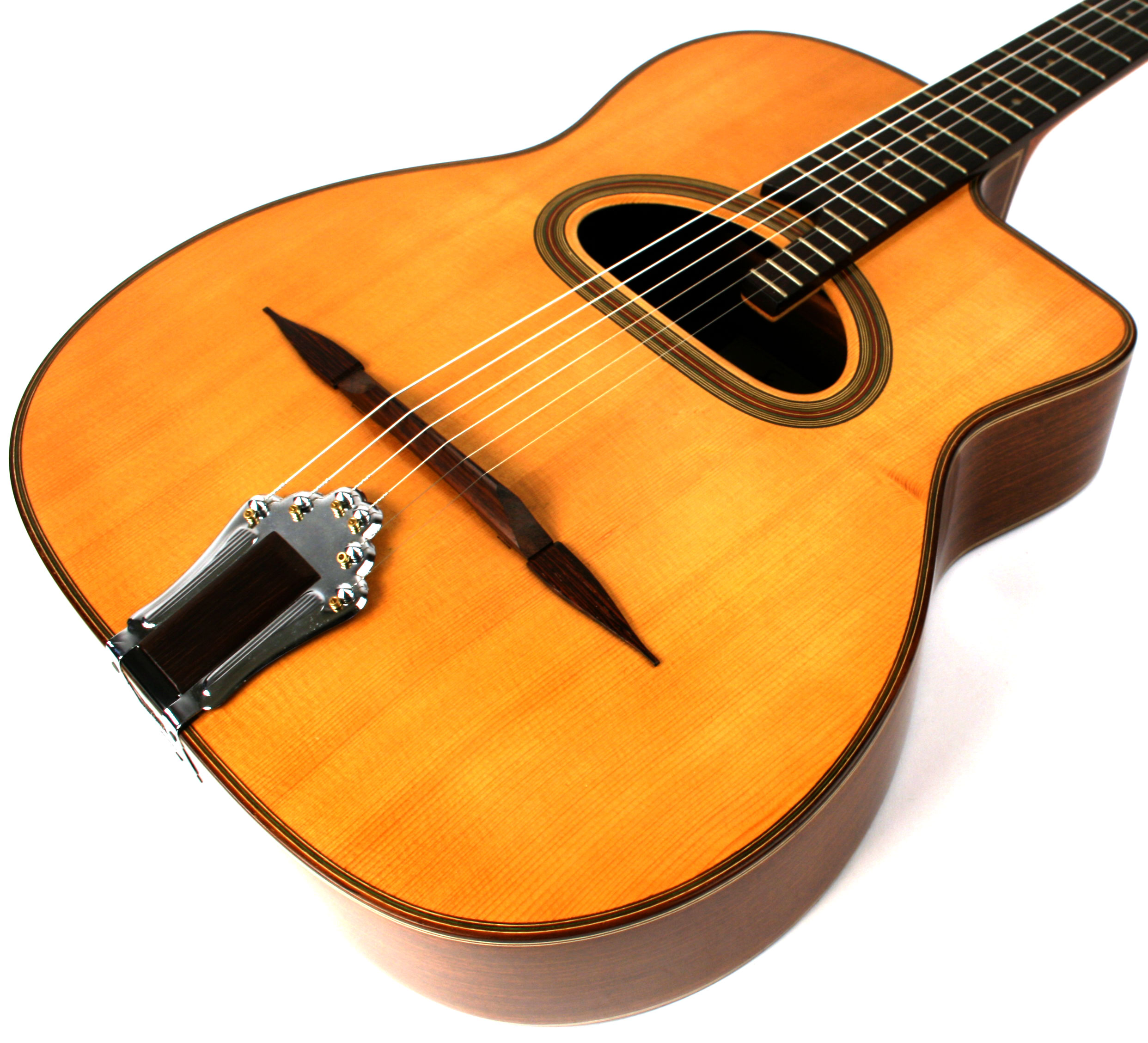 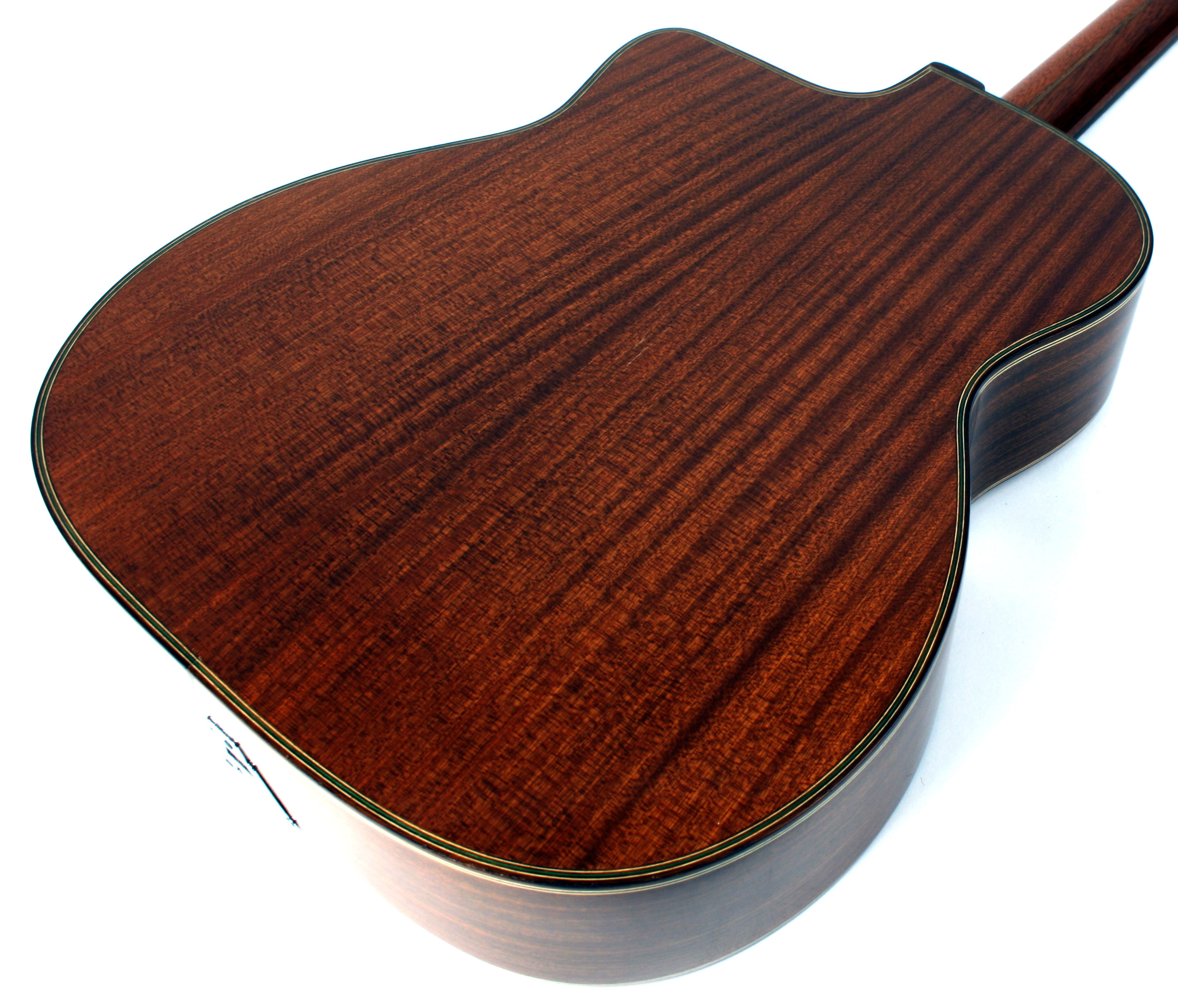 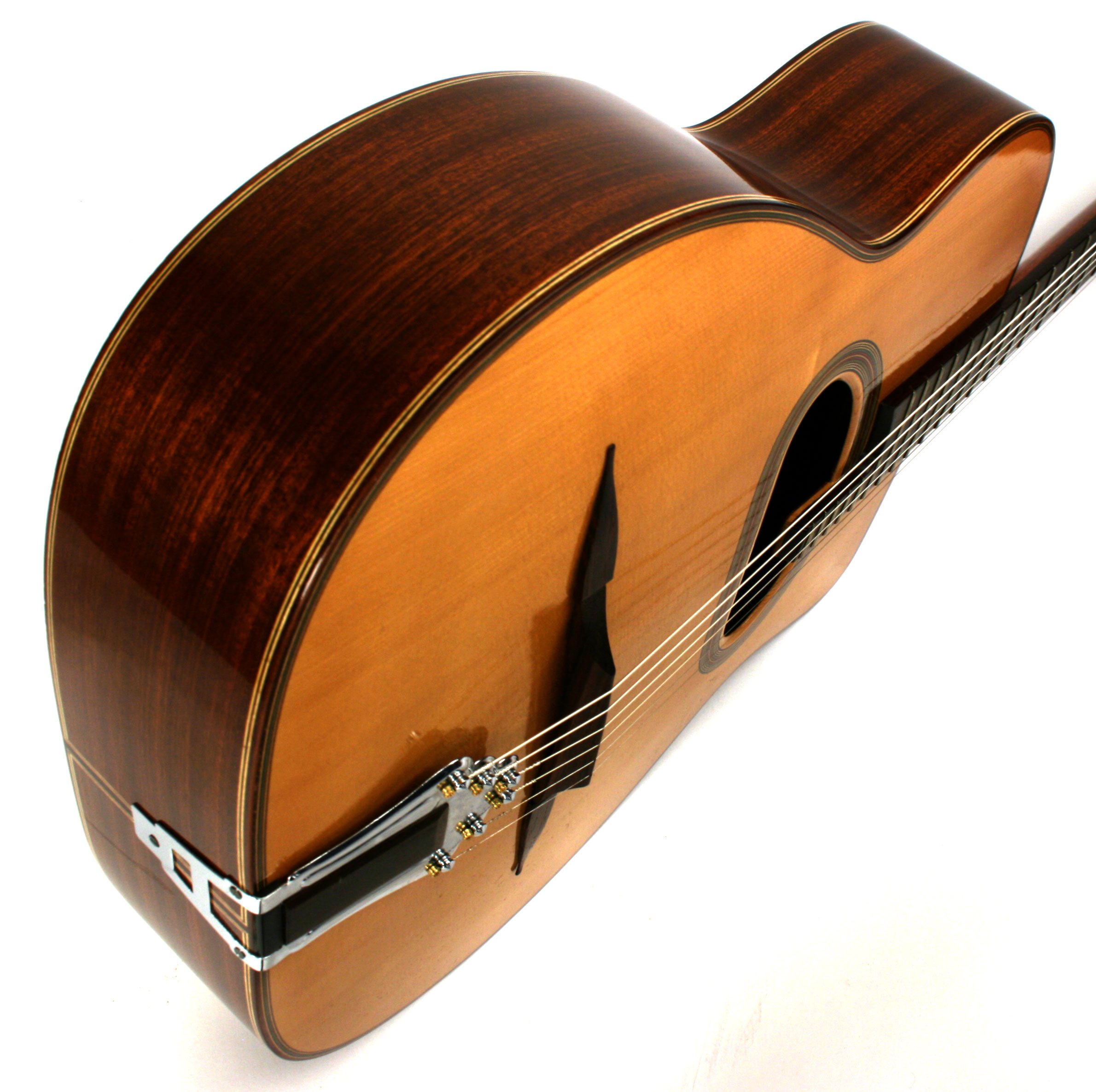 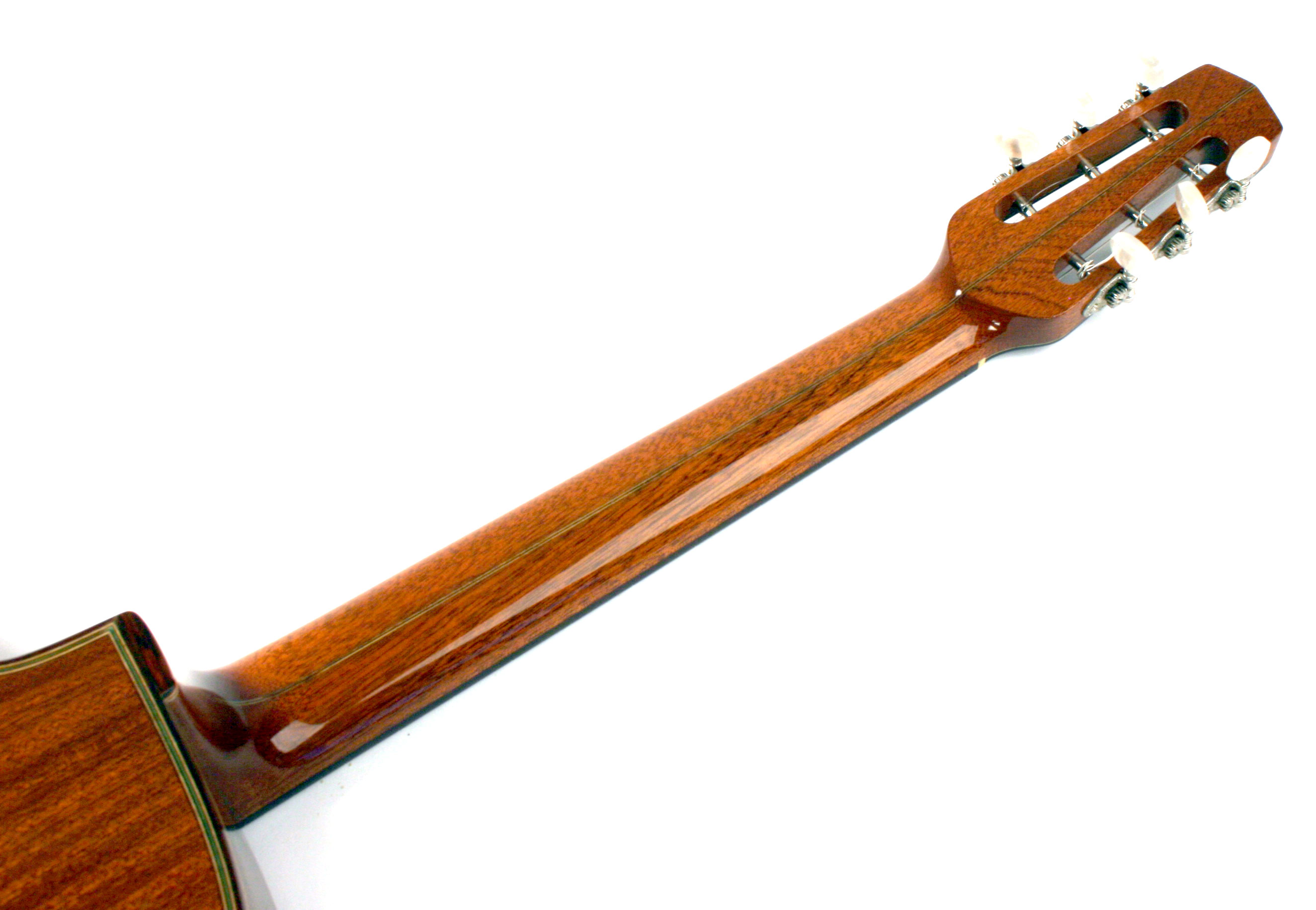 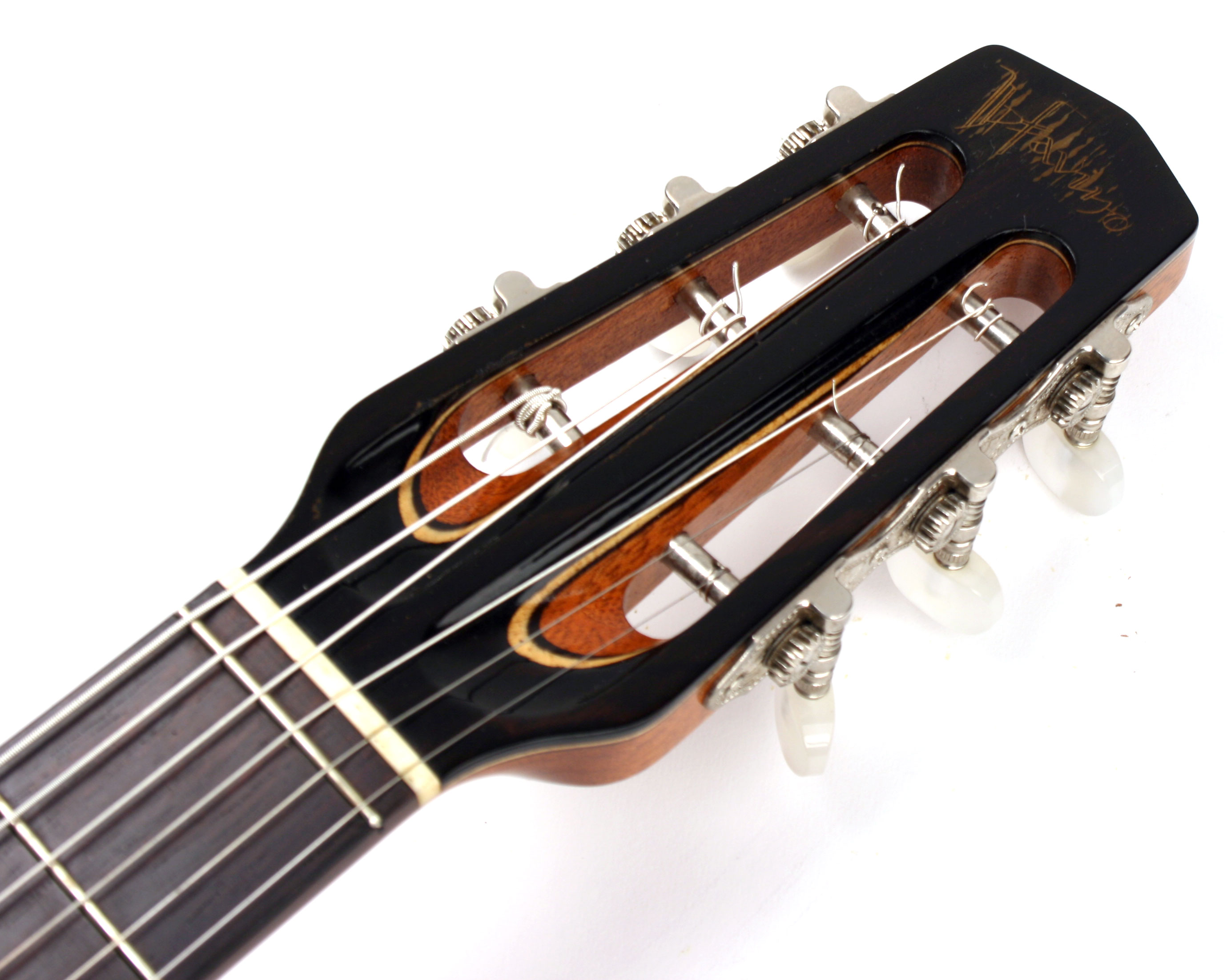 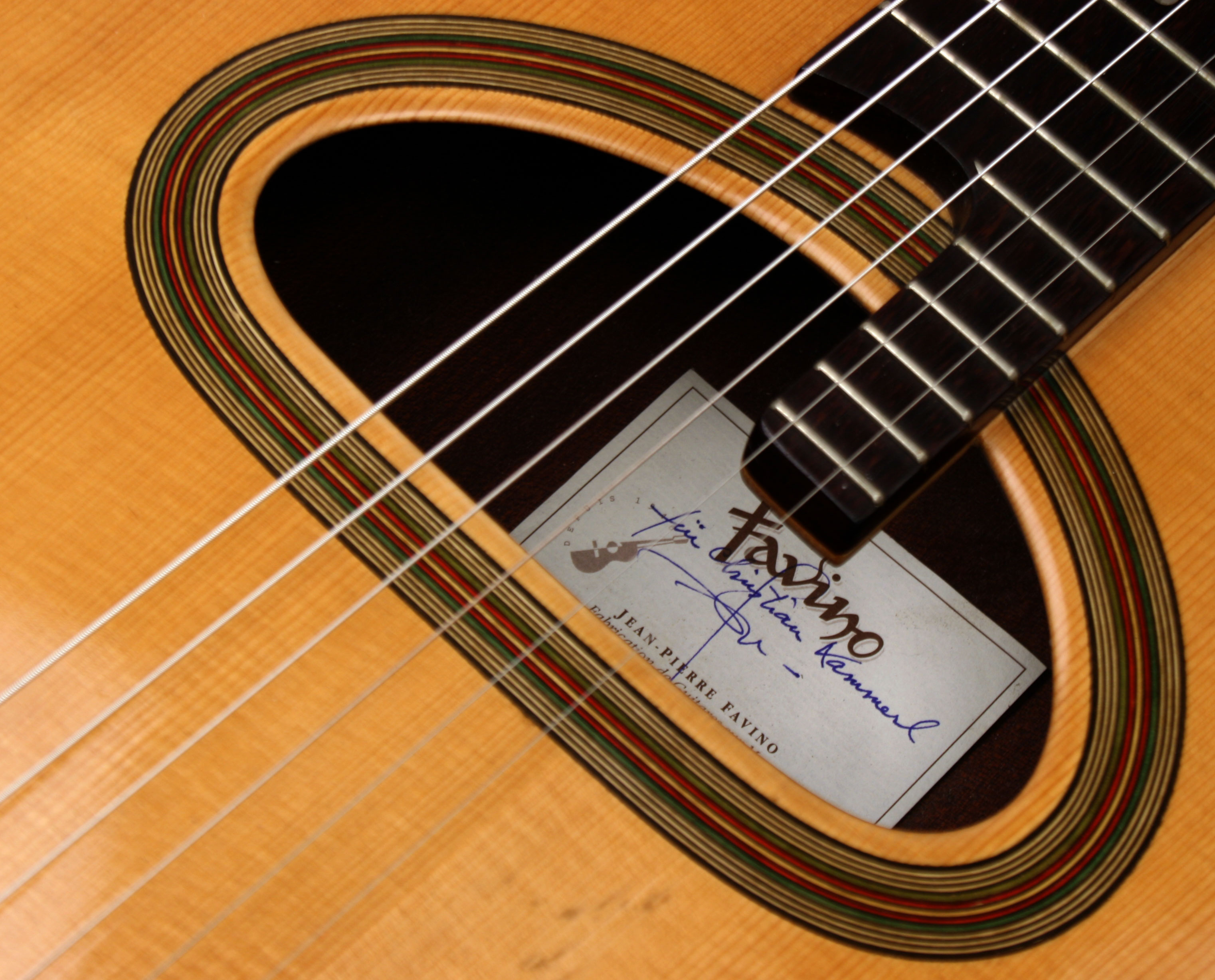 Follow Us Follow Us Follow Us Follow Us
Submit a Review
2003 Jean-Pierre Favino Jazz S
This instrument represents the final culmination of 50 years of evolution of the Favino guitar. Jacques Favino successfully refined the Selmer guitar to suit the needs of 1960-70s era players such as Matelo Ferret, Tchan Tchou Vidal, Han'sche Weiss, and the young Bireli Lagrene. These artists favored instruments with thicker mids and bass than was typical of the Selmer guitar. Jacques' son, Jean-Pierre, has adapted his father's classic design to meet the demands of contemporary players who seek a sleeker, easier playing guitar with a balanced and modern tone. Furthermore, Jean-Pierre transitioned the Favino shop from a fairly large scale production facility (four luthiers making about 20 guitars a month back in the 70s) to a premium quality, artisan workshop producing only six or so instruments a year. An opportunity to purchase a late period JP Favino guitar is rare, as so few exist and the wait list for a new one is around two years.

This instrument is one of the very rare 12 fret JP Favino D hole modele 10 S with a 666mm scale. Nearly all 12 fret Selmer type guitars have a 640mm or 650mm scale. On this guitar, JP Favino used the same scale he uses for his 14 fret guitars which is just shy of the 670mm scale that Selmer used. Apparently Jacques Favino made long scale 12 fret guitars from time to time, so there is some precedent for this.

Other notable features include a three piece headstock veneer that consists of maple sandwiched in-between two pieces of ebony. Such a nice touch! The modern style fingerboard extension goes up to the 25 the fret which extends the range of the instrument beyond what most 14 guitars have. Interestingly, the soundhole was cut to accommodate the fingerboard extension so that the top itself supports the extension entirely which will keep it from sinking or breaking off. The neck is built from two pieces of mahogany with a maple/ebony spline. Like the original Selmers, the interior of the guitar has been lacquered. All in all, very meticulous work with a sense of aesthetics and functionality that only a great master luthier can produce.

These unusual specs yield some fascinating results! This guitar has the warmth and complexity of a 12 fret guitar yet it still has enough zing to propel your lead lines through the din. The guitar has volume to spare and the tone is very fat with just enough sizzle to keep it from being dull. It's not one of the nasal type Favinos...very balanced. Actually probably has the most "even" response of any guitar I've had here. It also has a slight "openness" to the sound, but not excessively so which is the downfall of so many D holes. Just enough echo to add complexity without making it sound muddy or diffuse. If you're looking to get away from more traditional Gypsy guitars which are often very aggressive and bright, than this is it! Ultra modern tone that is complex and satisfying yet not wimpy. Only the best luthiers can pull this off....

Normally you would relegate a 12 fret guitar such as this to strict rhythm duty. However, the longer scale and slender heel give it the tone and high fret access you need to play lead. The heel has the most radical taper I've ever seen. Really helps you get your hand into a better position for high fret playing. This instrument is in excellent condition. There are no cracks. There are a few light scratches on the body. The frets have almost no wear.

This is a wonderful opportunity to own a pristine example built by arguably the greatest living Selmer style luthier today. Few can match the tone, workmanship, creativity, and aesthetic beauty of JP's work. If you're looking for something fresh and modern but with a real Gypsy soul, than this is it! A new JP Favino will cost over $8,000 and there is wait of two years or more. JP Favino only builds six guitars a year, so owning one of these puts you in a very elite club.