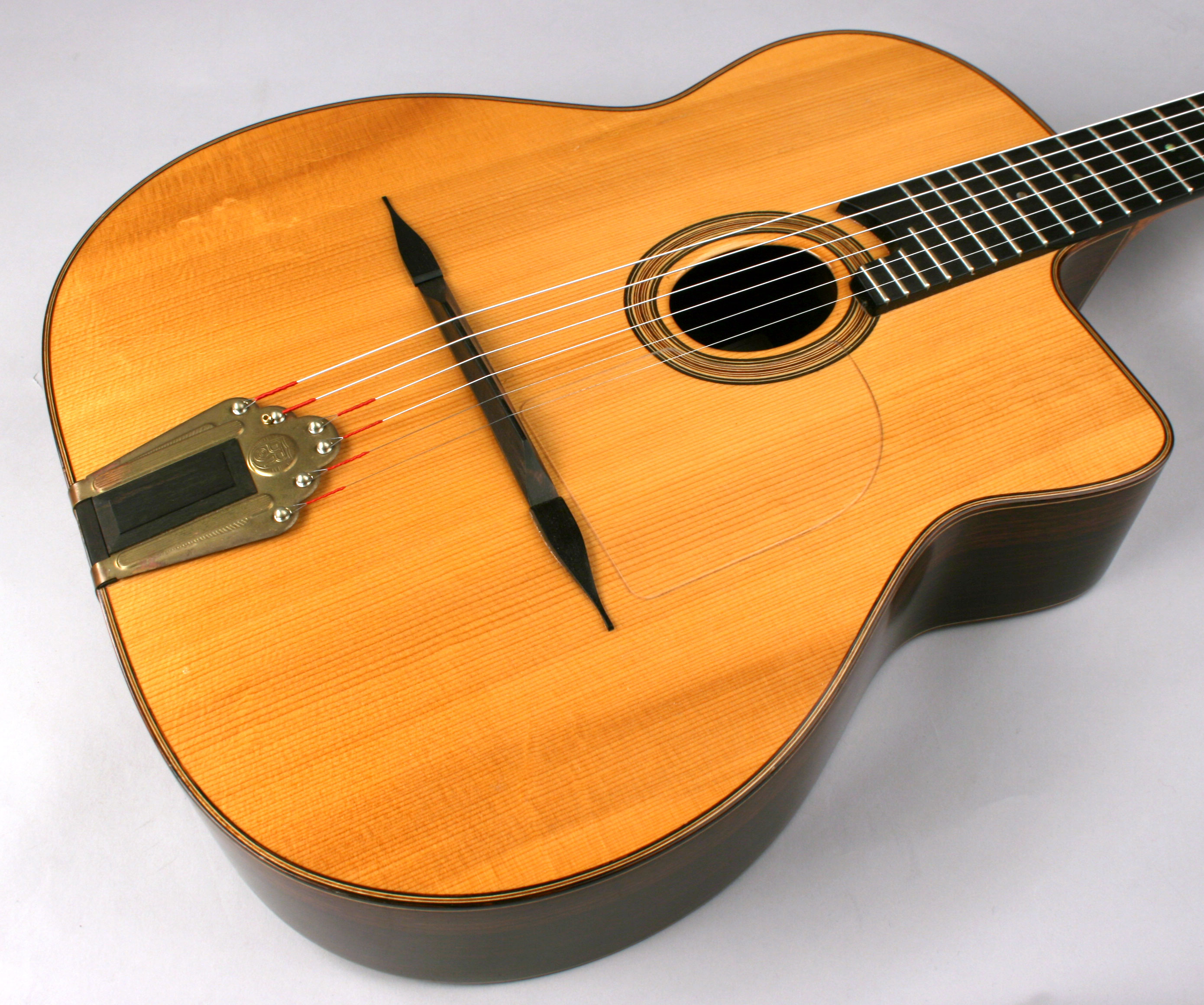 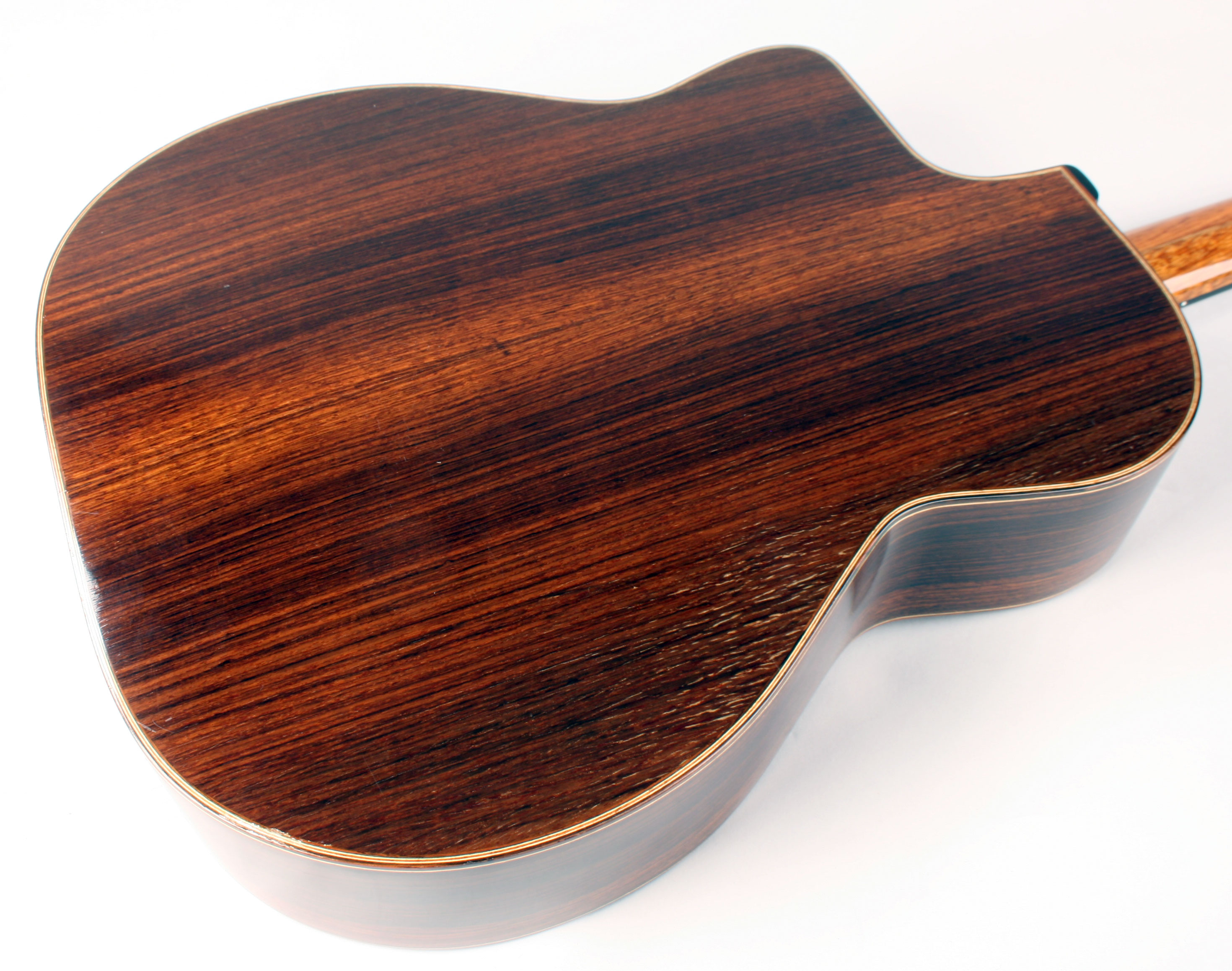 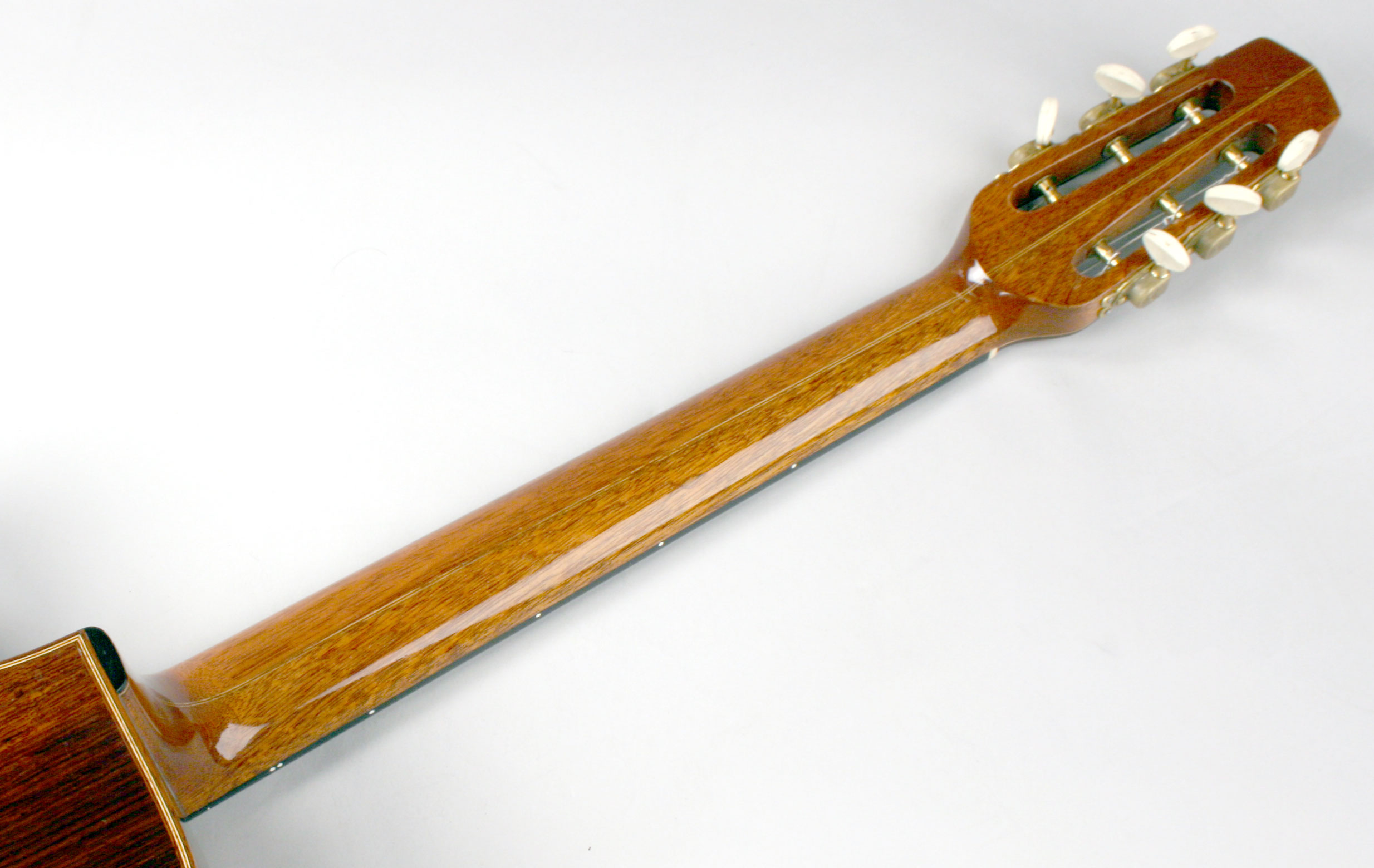 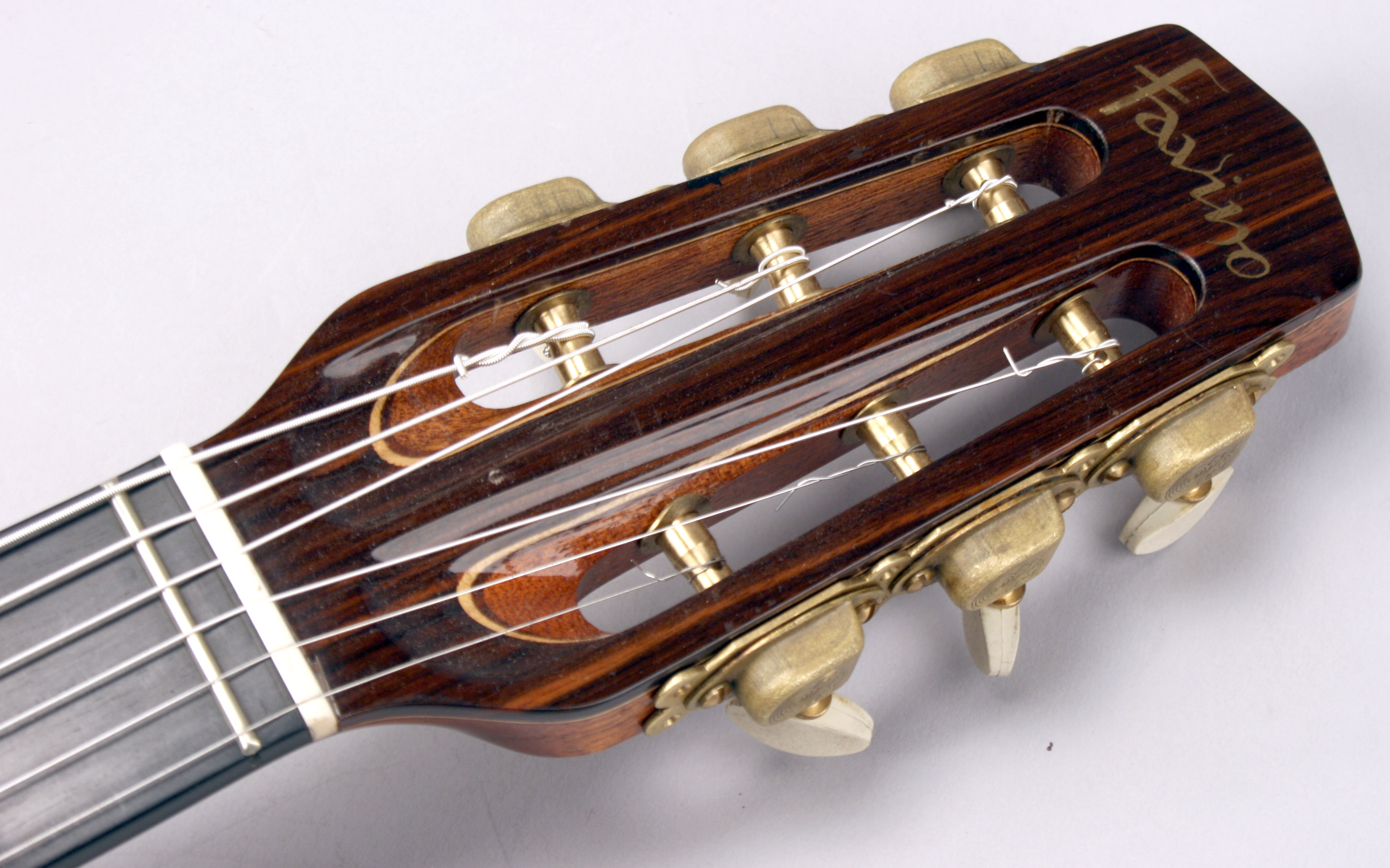 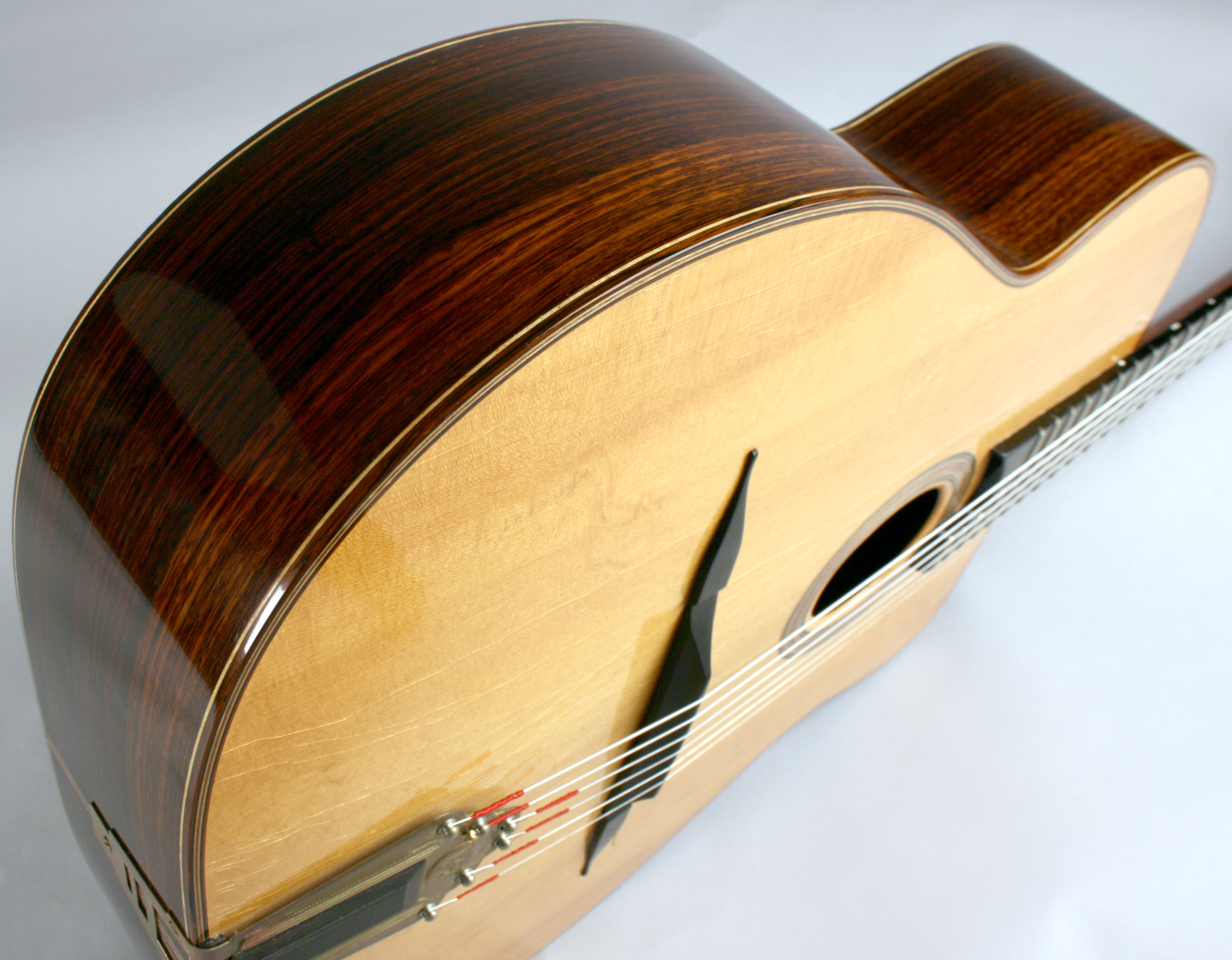 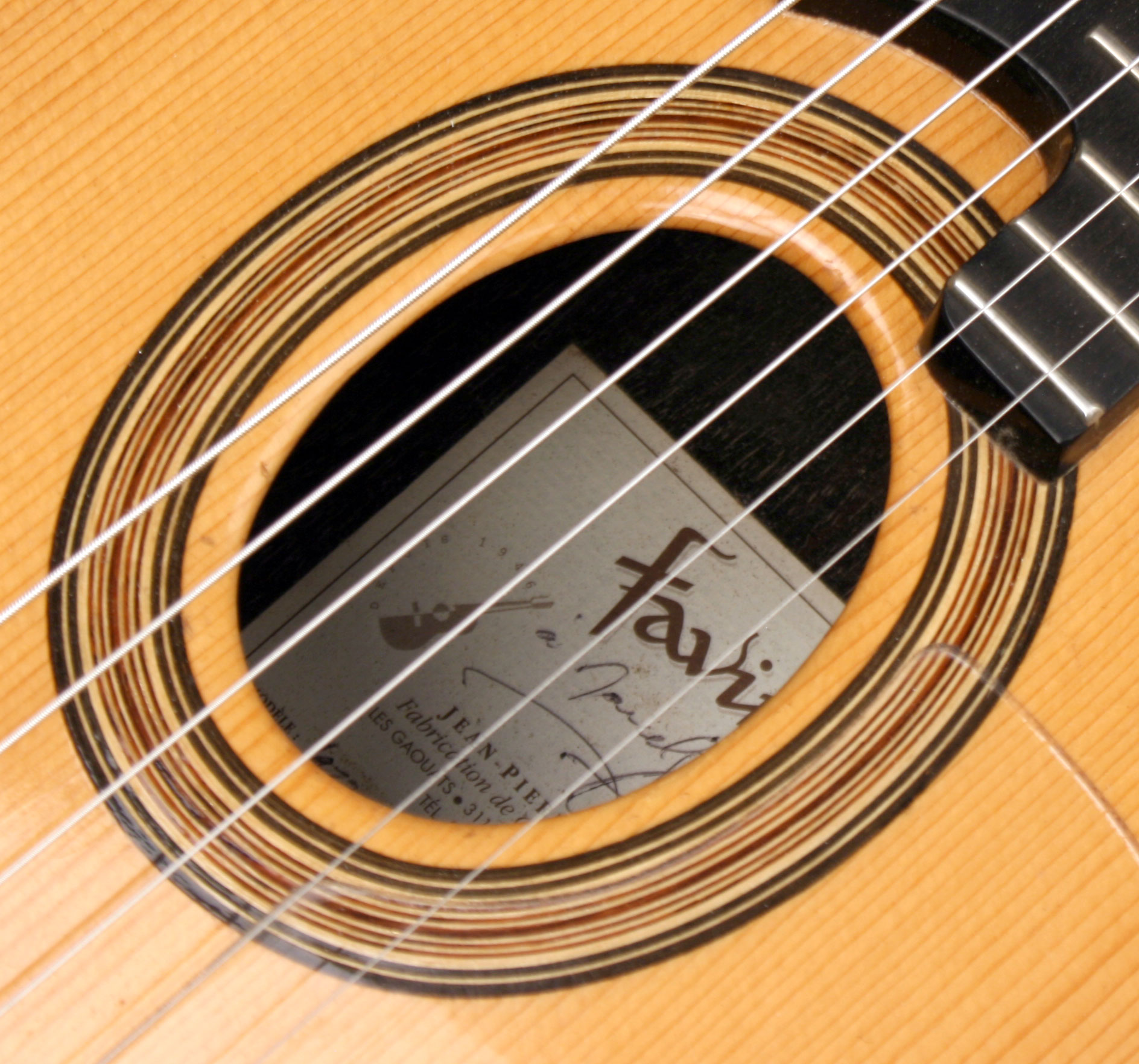 This instrument represents the final culmination of 50 years of evolution of the Favino guitar. Jacques Favino successfully refined the Selmer guitar to suit the needs of 1960-70s era players such as Matelo Ferret, Tchan Tchou Vidal, Han'sche Weiss, and the young Bireli Lagrene. These artists favored instruments with thicker mids and bass than was typical of the Selmer guitar. Jacques' son, Jean-Pierre, has adapted his father's classic design to meet the demands of contemporary players who seek a sleeker, easier playing guitar with a balanced and modern tone. Furthermore, Jean-Pierre transitioned the Favino shop from a fairly large scale production facility (four luthiers making about 20 guitars a month back in the 70s) to a premium quality, artisan workshop producing only six or so instruments a year. An opportunity to purchase a late period JP Favino guitar is a rare, as so few exist and the wait list for a new one is around two years.

This is an early version of JP's modele S, which is a fusion of Selmer and Favino elements. The body is smaller than the original Favino. It is actually nearly identical to a Selmer: 15 3/4" wide, 3 5/8" deep. The scale length is JP's typical 666mm, which is slightly shorter then a Selmer (670mm). The interior is lacquered like the original Selmers. Other innovations include a finely tapered heel and a stylized fingerboard extension that goes all the way up to the 26th fret. The tailpiece has been replaced with a Dupont DR and the tuners with a set of Gallato Selmer replicas.

The sound of this instrument is open, balanced, and full-bodied, with a distinct modern Gypsy flavor. A perfect guitar for those looking for a warm, rounded lead sound that is soothing and listenable while still having enough bark to project when needed. The response is extremely even across the entire range, with the notes up at the 20th fret and beyond projecting as well as those down at the 1st fret. The chordal sound is rich, with just enough bass to fill out the harmonies, but not so much that it becomes overly dark and diffuse. As a result, this instrument is equally at home playing modern jazz accompaniment as it is with old fashioned la pompe. A uniquely versatile instrument that is well suited for the modern player.

The playability is excellent. With a buttery 2.8mm action, nearly anything is possible. Be it lightening fast Gypsy leads or intricate Johnny Smith chord melody arrangements, this guitar can do it all!

This instrument is in very good condition. JP Favino uses an extremely light finish to maximize the acoustic resonance of hisnstruments, a technique which works exceptionally well! However, it does make his guitars more prone to finish checking, which this guitar has on the top and body. The checking on the top is fairly subtle. The most noticeable checking appears on the back, in the lower bass bout area. There is one top crack on the top, at the waist. It has been cleated and is stable. The bass side of the headstock has an open screw hole, likely leftover from the original tuners. The treble tuners are held on only with the tuner cover screws and perhaps some glue. Despite the missing mounting plate screws, the tuners are solidly attached to the headstock.

This is a wonderful opportunity to own a pristine example built by arguably the greatest living Selmer style luthier today. Few can match the tone, workmanship, creativity, and aesthetic beauty of JP's work. If you're looking for something fresh and modern but with a real Gypsy soul, than this is it!