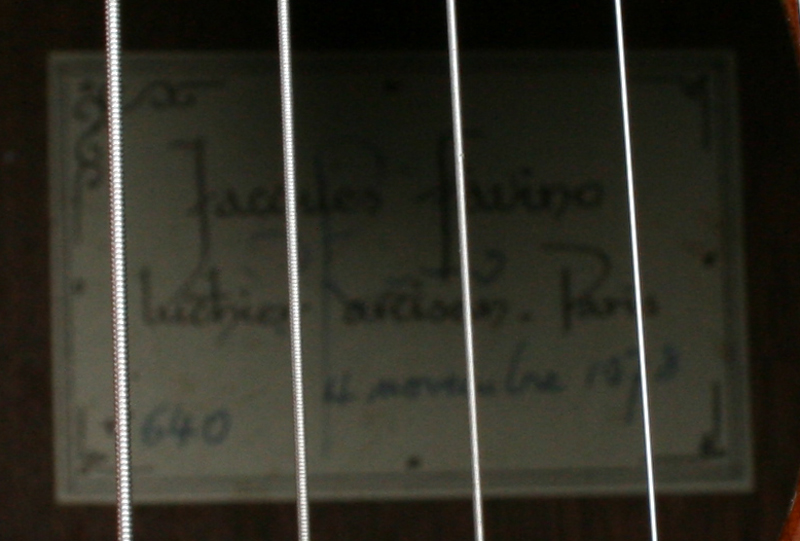 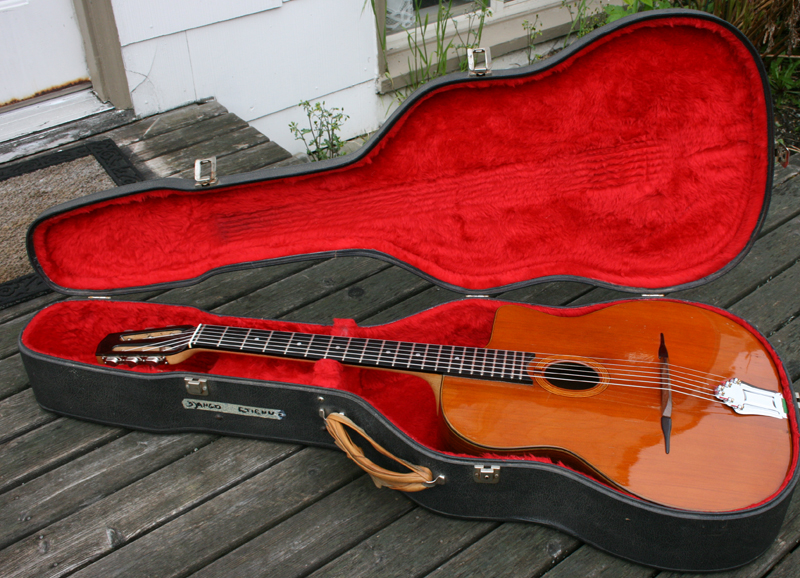 This guitar features Indian Rosewood back and sides, three piece maple neck, and a Cedar top (rather rare!). The measurements are typical for a Modele #10 Favino: 675mm scale, 16 1/2" body, 4" body depth.

If you like the classic Favino sound on the early Boulou Ferre recordings like Gypsy Dreams and Pour Django, Bireli's early recordings (Swing '81 and Routes to Django), or Han'sche Weiss/Lulu Reinhardt (LuluSwing) then this is the guitar for you! Sound wise this Favino is hard to beat. It is without a doubt my favorite Jacques Favino that has come through the shop. It has a marvelous high end that is so clear but not harsh. The projection of lead lines is astounding and chords are just ultra crunchy. There is a nice "openness" to the sound that gives it a lot of character. The low end is very defined which allows for precise single note runs on the low strings without becoming muddy or diffuse. Overall, the tone is very rich and clear with the most high end "sparkle" I've ever seen on a Jacques Favino (Favinos are usually darker and more midrange focused then Selmers or Busatos).

This guitar was played professionally by Ismael Reinhardt so the setup and playability are perfect. The action is shocklingly low at 2.75mm and plays very easily with 10 or 11 gauge Argentine strings. Doesn't get better than this folks, you can play even the most difficult passages with ease. Every note is clear as a bell....can be played hard without any fret buzz. The frets are jumbo size. The hardware is all original by Salvatore Bilardi. The tuners are the backwards turning type SBs. One of the tuning buttons was replaced.

The condition is extra fine. There are no cracks. Some minor pick wear and a few small scratches and dings. The guitar appears to have been oversprayed. There is evidence of a removed MOP dot at the fourth fret. Don't ask me what that's about! Maybe a mistake when it was built.


The case is a bit beat up with an improvised handle.