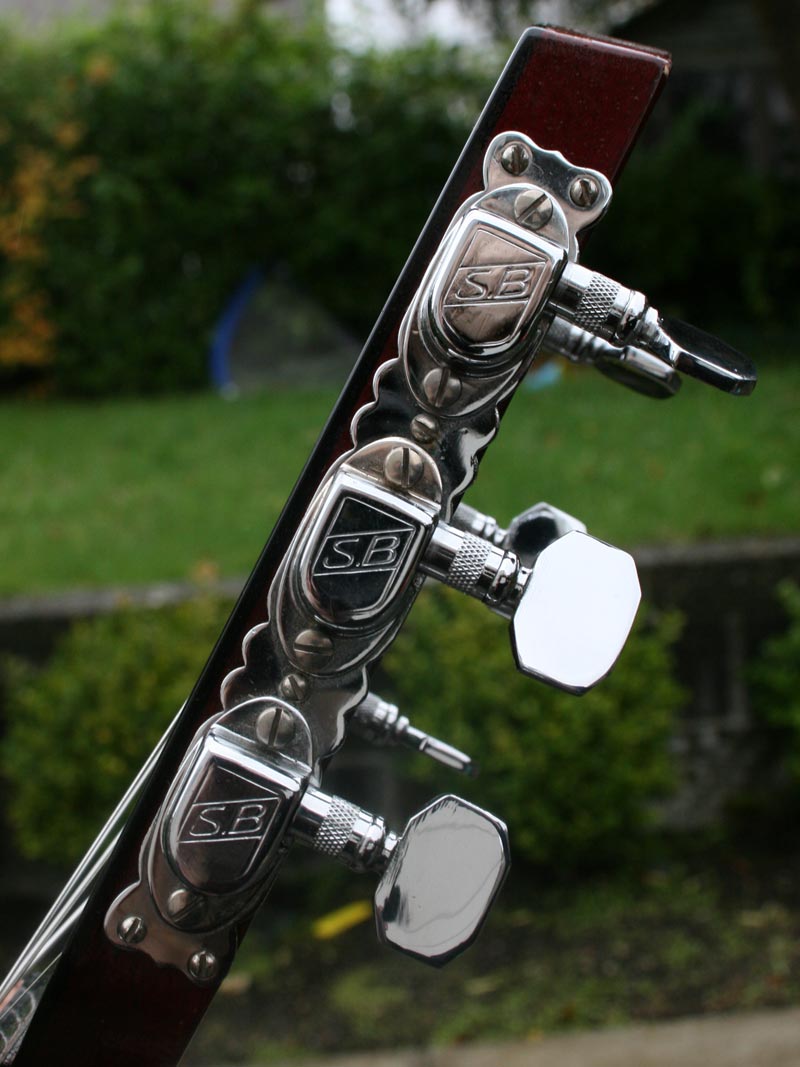 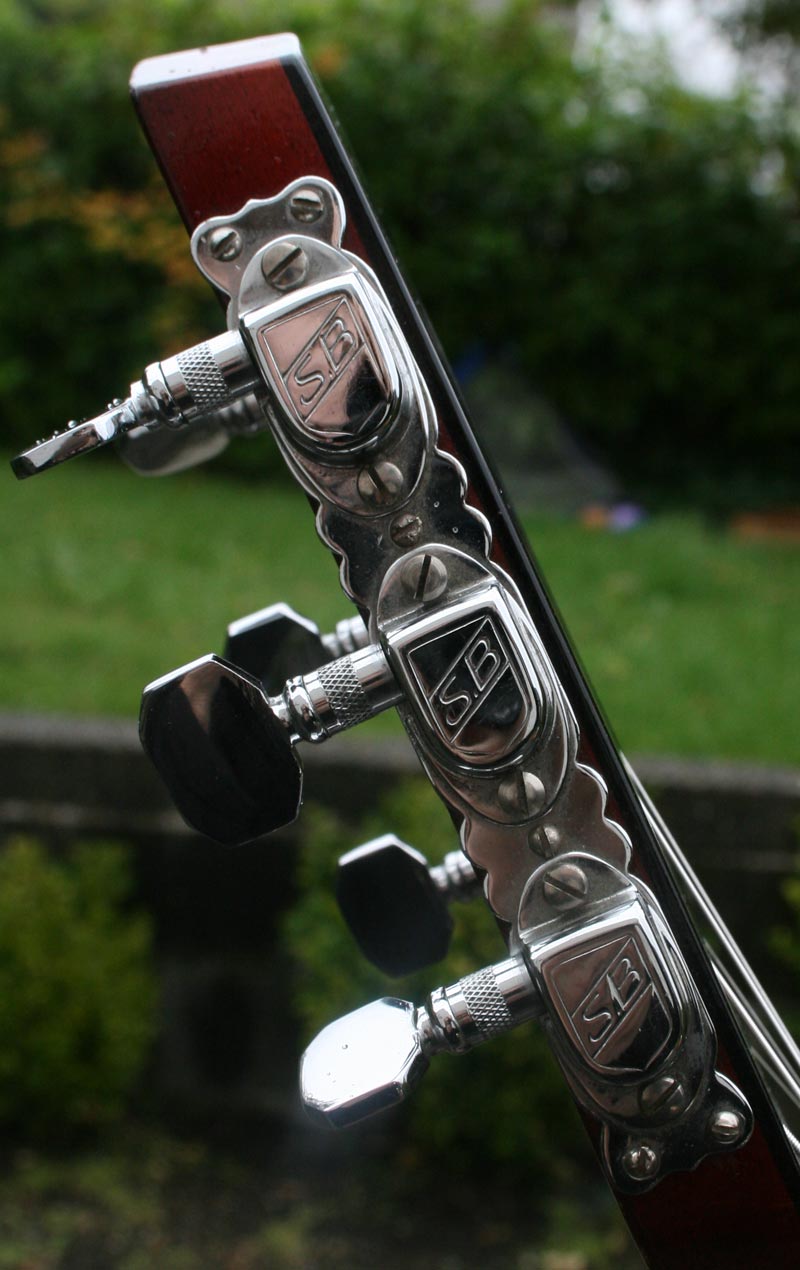 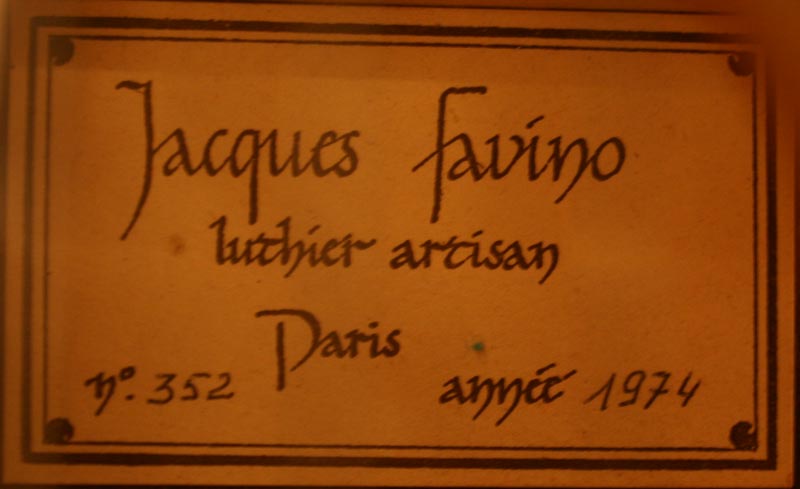 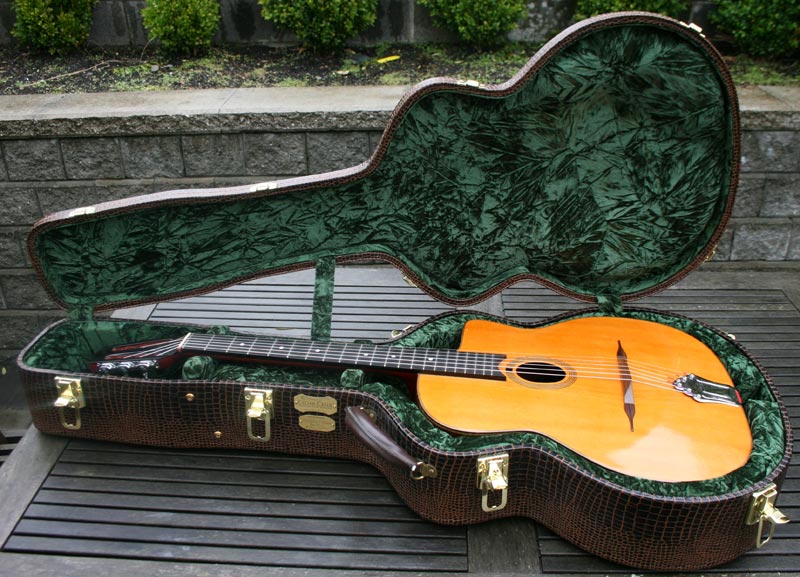 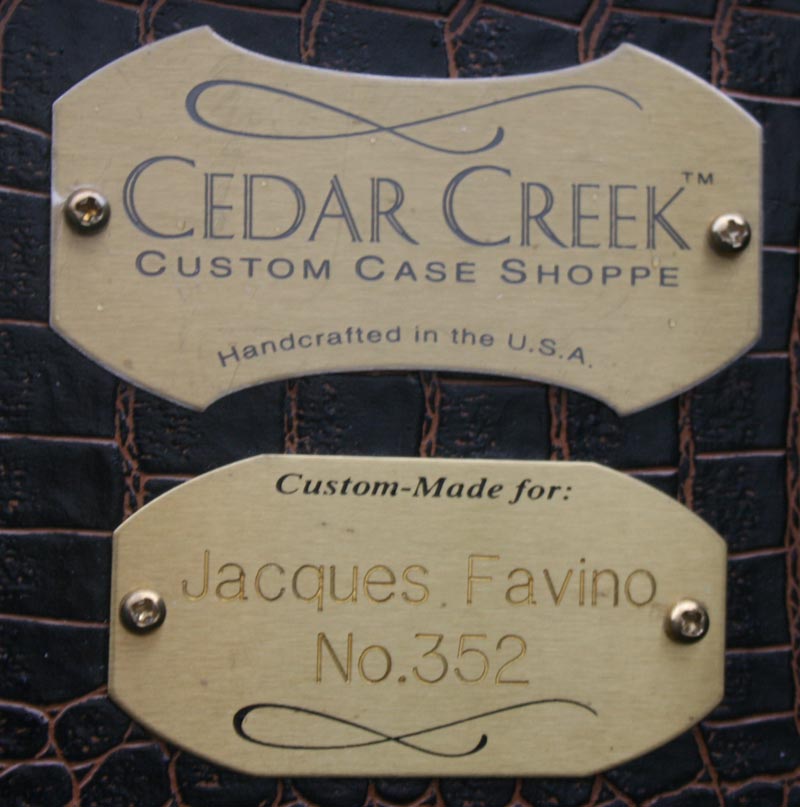 Follow Us Follow Us Follow Us Follow Us
Submit a Review
1974 Jacques Favino 14 Fret Oval Hole #352 (Indian Rosewood Back and Sides) GREAT CONDITION!!
OMG!!! The condition of this classic 1974 Jacques Favino is nothing short of breathtaking! It has had only two owners over it's long life and has been well cared for. It is stunningly beautiful and looks much the same way it did when it was carried out of Favino's shop over 30 years ago. A rare and precious find....so few of these  guitars have made it this long in such pristine condition. And even better, this guitar is hands down the best sounding Favino I've ever had my hands on! More below....

This guitar features Indian Rosewood back and sides, three piece Maple neck, and a Spruce top. The measurements are typical for a Modele #10 Favino: 16 1/2" body, 4" body depth. The scale is 670mm which Favino sometimes used, although he more often used 675mm. The shorter scale makes it easier to play than many other Favinos.

If you like the classic Favino sound on the early Boulou Ferre recordings like Gypsy Dreams and Pour Django, Bireli's early recordings (Swing '81 and Routes to Django), or Han'sche Weiss/Lulu Reinhardt (LuluSwing) then this is the guitar for you!

The tone and projection of this particular Favino are stupendous. It is by far the loudest and best sounding one I've ever had in the shop! It has a lot more high end sparkle than Favinos normally have and it's not nearly as nasal either. It's ultra crunchy and snappy...most other Favinos would sound quite a bit darker by comparison. It has a very "open" tone with lots of natural reverb (the good kind that isn't grating or annoying). The volume it has defies physics! It is even louder than a Busato which is not easily done. Chords fill the room and single note lines pop out quickly with clarity and definition. It's not as bass heavy as many other Favinos. The bass register is very "tight" which keeps the guitar from sounding to flubby. All in all, I'd say this one is God's gift to guitarists! Something this special is not easy to come by.

As mentioned earlier, the condition of the guitar is excellent! It has some very mild checking on the treble side of the back and and also some checking on the top side. There is also a little checking and nearly imperceivable pickwear on the top. There are a few small scratches and a few places where the finish got chipped off the binding. All these things are very minor and for the most part you need to get out your magnifying glass to even see them.

At one point there was a pickup installed which is no longer there. Only the unwired endpin jack remains.

The hardware is all original by Salvatore Bilardi. These are the fancier type tuners with the steel buttons, normally found only on the fancier Macias models! They are in mint condition....they gleam and sparkle under the stage lights.

Frets are new and the guitar has been professionally setup. It has super slinky 2.8mm action. Plays like a fast modern archtop but still barks like a dog!


The guitar comes with a custom Cedar Creek Alligator skin case made specifically for this guitar! These cases cost over $400.