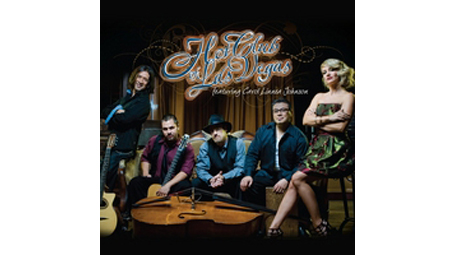 Follow Us Follow Us Follow Us Follow Us
Submit a Review
Hot Club of Las Vegas
The band originated in Las Vegas in ’06 born of the passion of rippin’ guitarist Mundo Juillerat, the “Flyin’ Hawaiian”, who then collaborated with the versatile bass player Christopher Davis to form the base of the group.  Percussion was added soon after with the addition of the solid rhythms of Gabriel Santana Falcon on the cajon (or box) followed by Marlow “Le Pompe” Valentin as the rhythm guitarist.  Originally an acoustic instrumental group the band decided they wanted to expand upon the traditional gypsy jazz sound and add vocals.  While playing in the pit of the Las Vegas production of "Mamma Mia," Mundo was captured by the power and style of the voice of Carol Linnea Johnson who was playing the lead role of Donna in the show.  The phrase, “we need someone like Carol to sing with us,” was a mantra shared among the band members for some time.  After exhausting the options of who might be like Carol, Mundo finally approached Carol herself and without hesitation she agreed to join the group in spite of a very busy schedule. Work on the debut album, “Hot Club of Las Vegas Featuring Carol Linnea Johnson,” began in spring of ’08 and was completed in time for the CD release party at VOX Wine Lounge in Las Vegas on December 12 of that same year.  After much Love and labor, the band is proud to offer up this first taste of Gypsy Jazz with a twist.