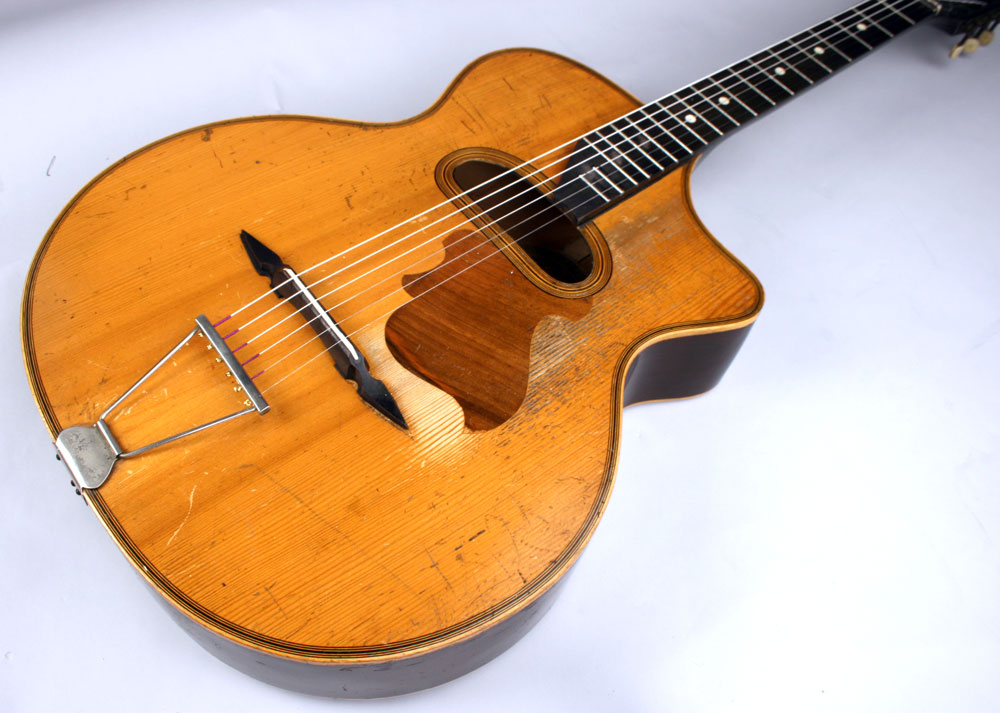 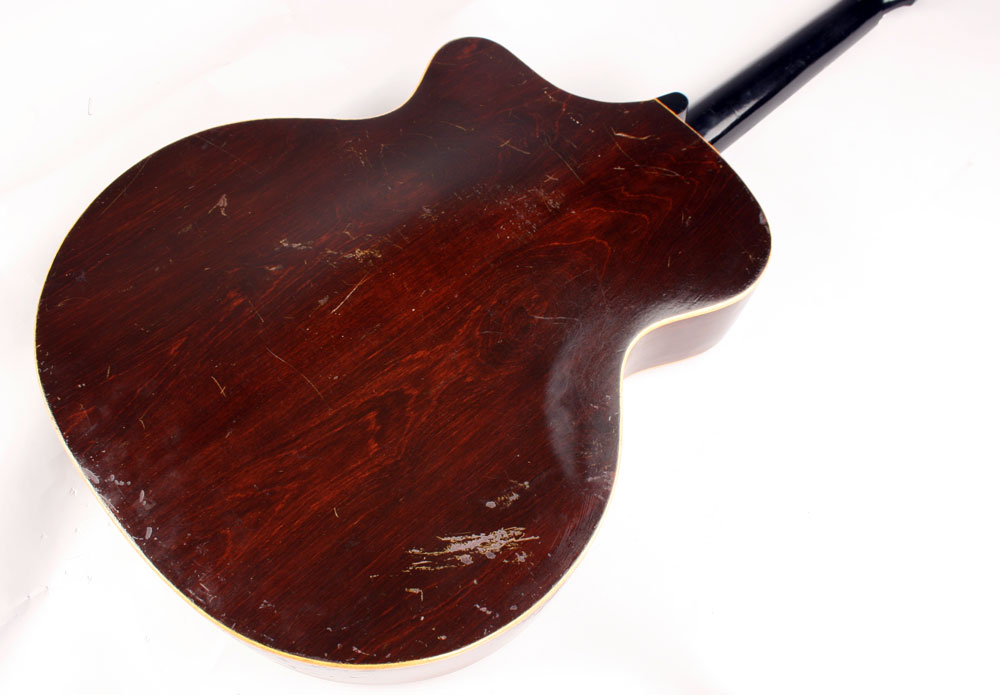 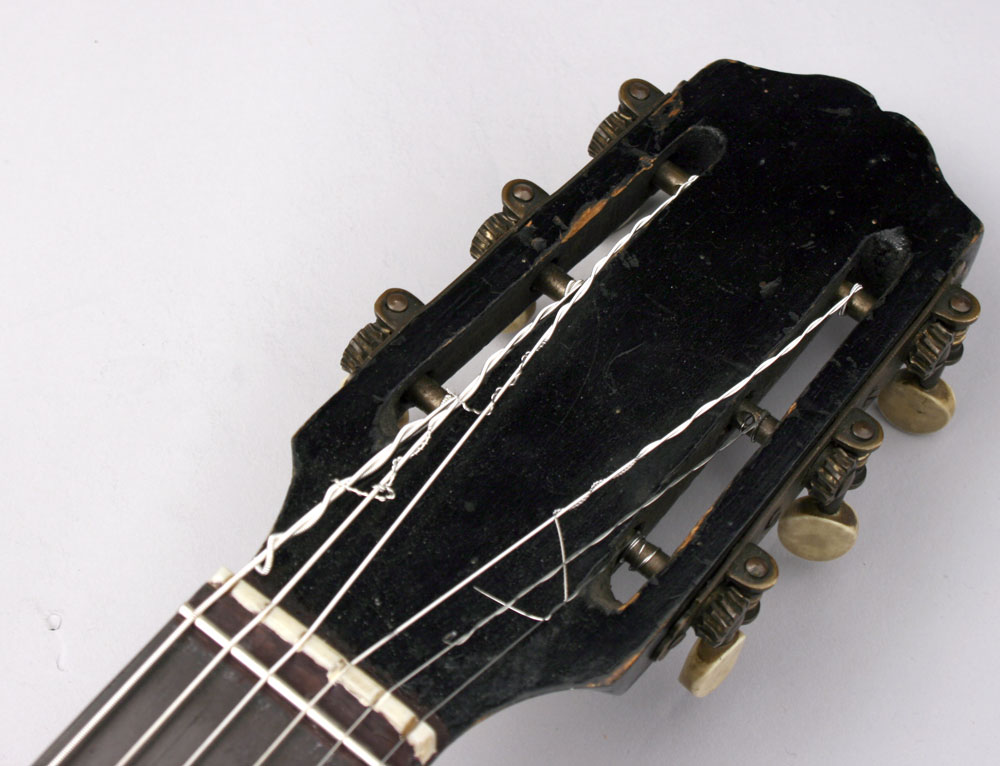 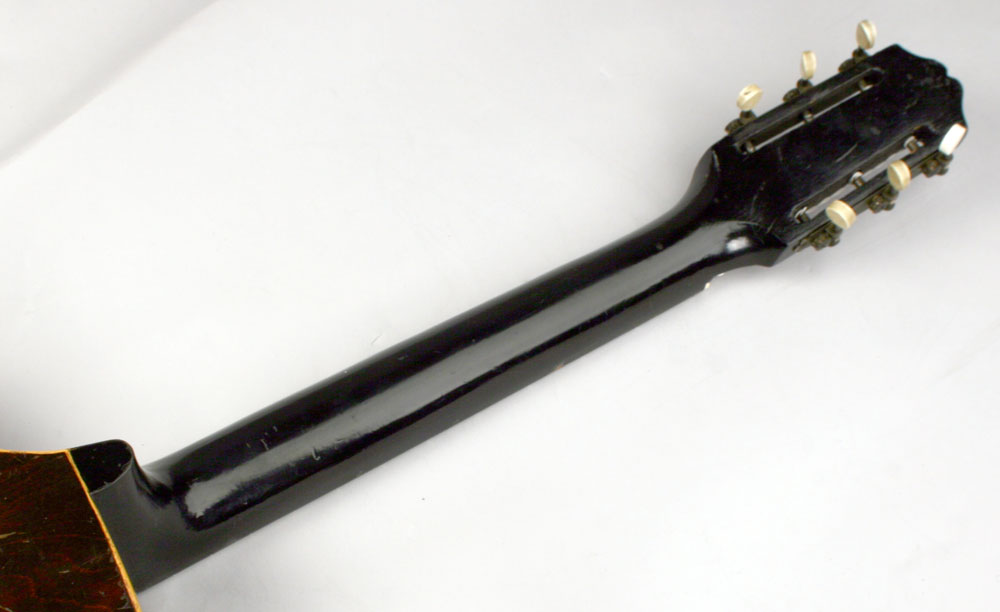 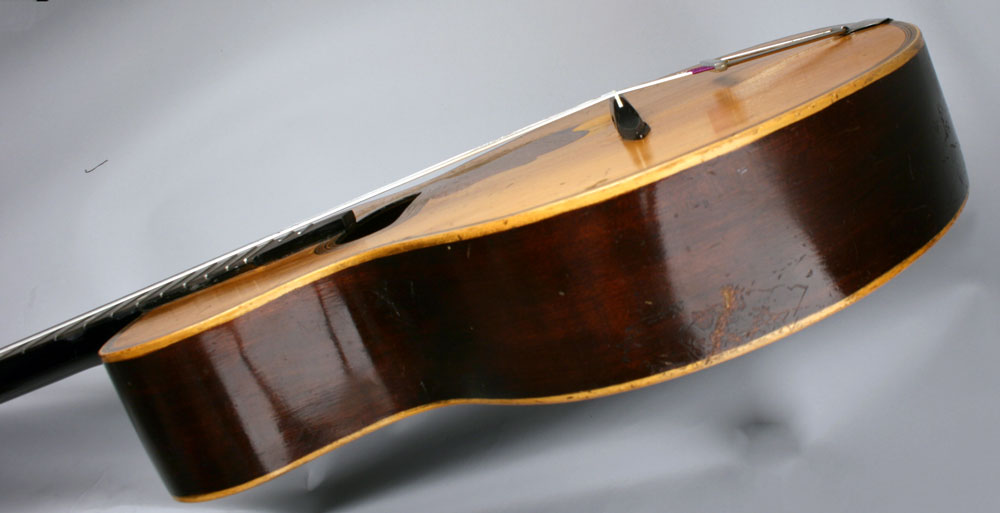 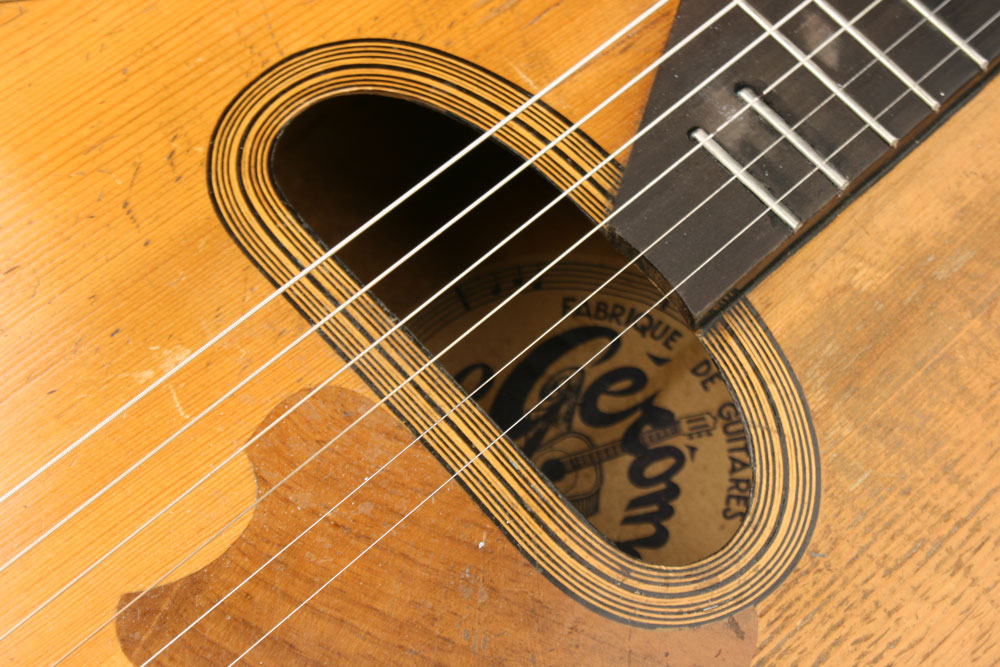 Follow Us Follow Us Follow Us Follow Us
Submit a Review
1940s Gerome Modele Jazz
The Gerome family has been making instruments in Mirecourt, the ancient center of French luthiery, for over a century. First known for their Neapolitan mandolins, the Gerome workshop eventually grew to the point where they were producing nearly 2000 guitars and mandolins a month. Over the decades Gerome instruments gained a reputation for their excellent quality, great tone, and aesthetic beauty. By the 1990s the Gerome brothers had all retired and passed their legacy onto their apprentice, Philippe Moneret.

This wonderful example is the Jazz model that Gerome produced in the 1940s. It features a distinctive bean shaped soundhole, a short 12 fret neck, and a unusually wide lower bout. Other unique features include the original trapeze tailpiece, original wood pickguard, an arched back, and a one piece bridge/moustache with a bone saddle.

This distinctive model has often found itself in the hands of notable Gypsy players, with the most famous being Dorado Schmitt's performance of Kali Sara in the film Latcho Drom (see video clip.)

The sound of this instrument is simply miraculous! One of the best "sleepers" I've had in quite a while. Don't be fooled by this instrument's modest looks or price tag as it has an engine that rivals some of the best. It is astonishingly loud, with the kind of projection that makes it a joy to play in a rowdy jam session or around the campfire. As you'd expect for a 12 fret guitar, it has very deep mids and a full bass response. As a result, chords sound immense and pianistic, with a great range from deep lows to crisp trebles. What you wouldn't expect is the snappy single note lines that this guitar can produce. Lead lines are pleasantly complex and open in character, yet with a nice bite which makes them easily audible in volume challenged situations.

This instrument is in very good condition. There are no cracks or other serious damage. It does have the sort of wear you'd expect of a guitar of this age: numerous dings, scratches, and pickwear. It did have some improvised "white out" fret markers on the side and on the very high section of the fingerboard which were later removed leaving a small bit of residue. The top has sunk somewhat and is slightly concave.

First and foremost, this guitar is a rhythm players dream! However, it's spunky "can do" attitude makes it a great backup lead guitar as well. Hat's off to Gerome for bringing this joyous instrument into the world.