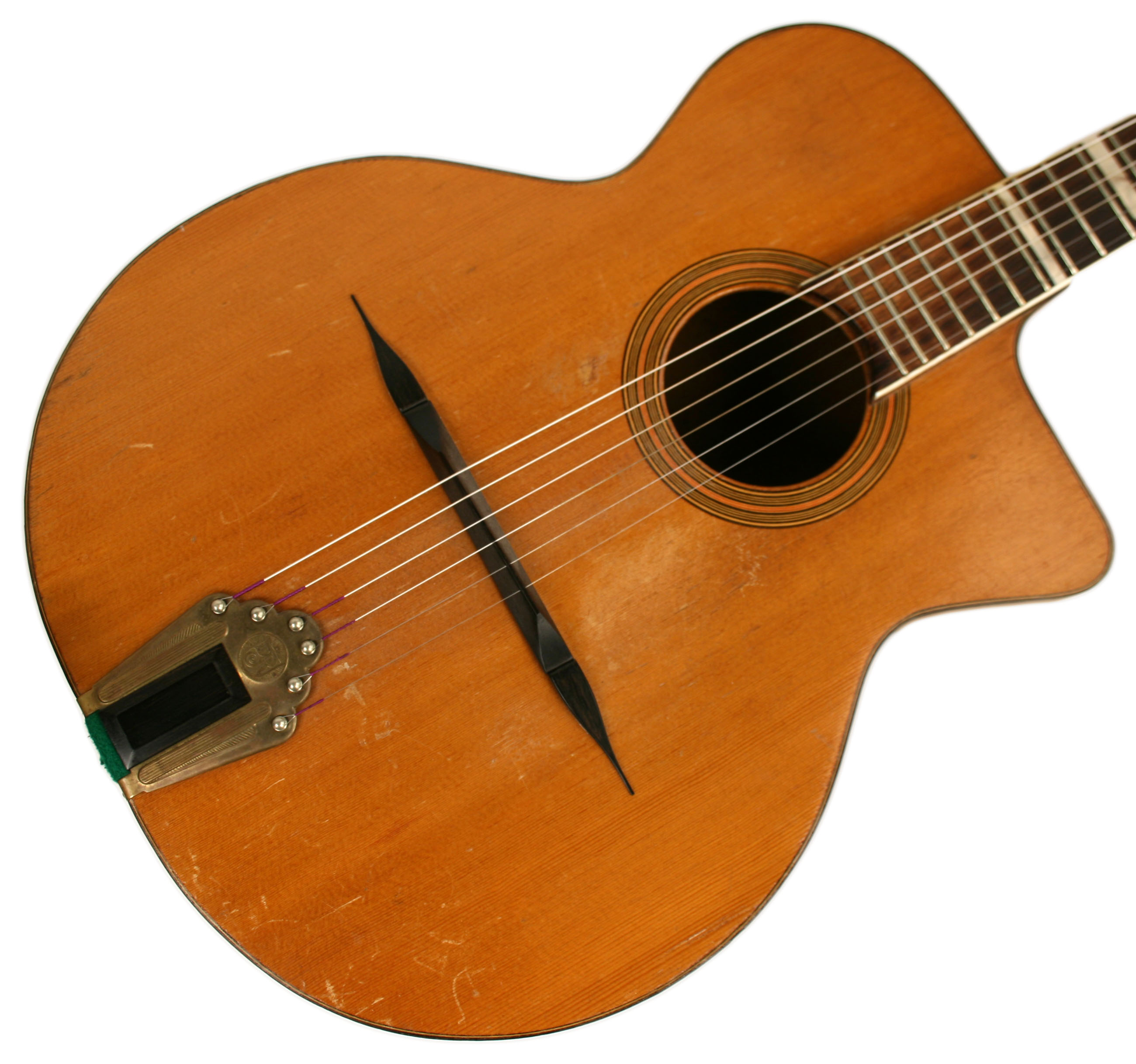 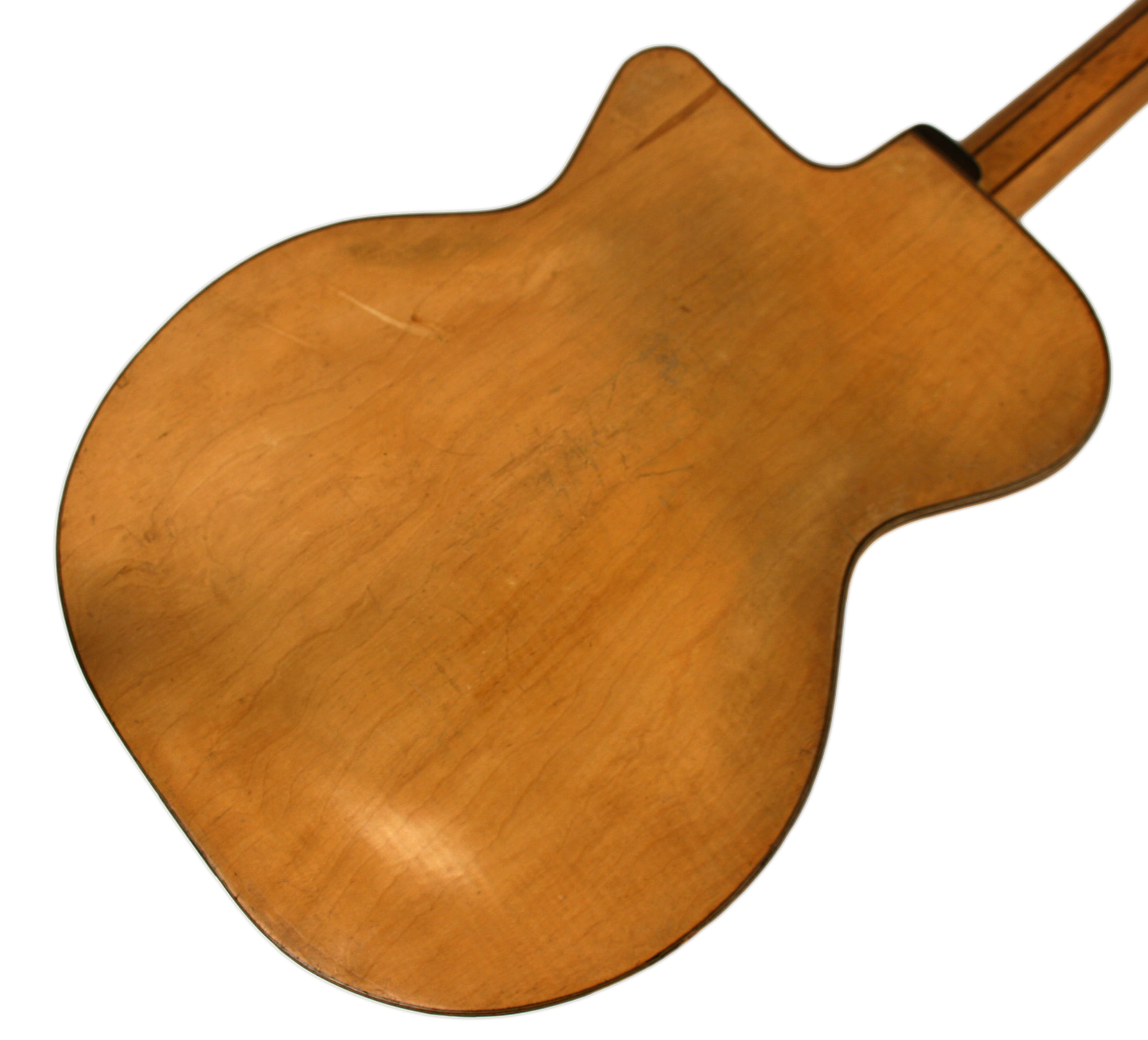 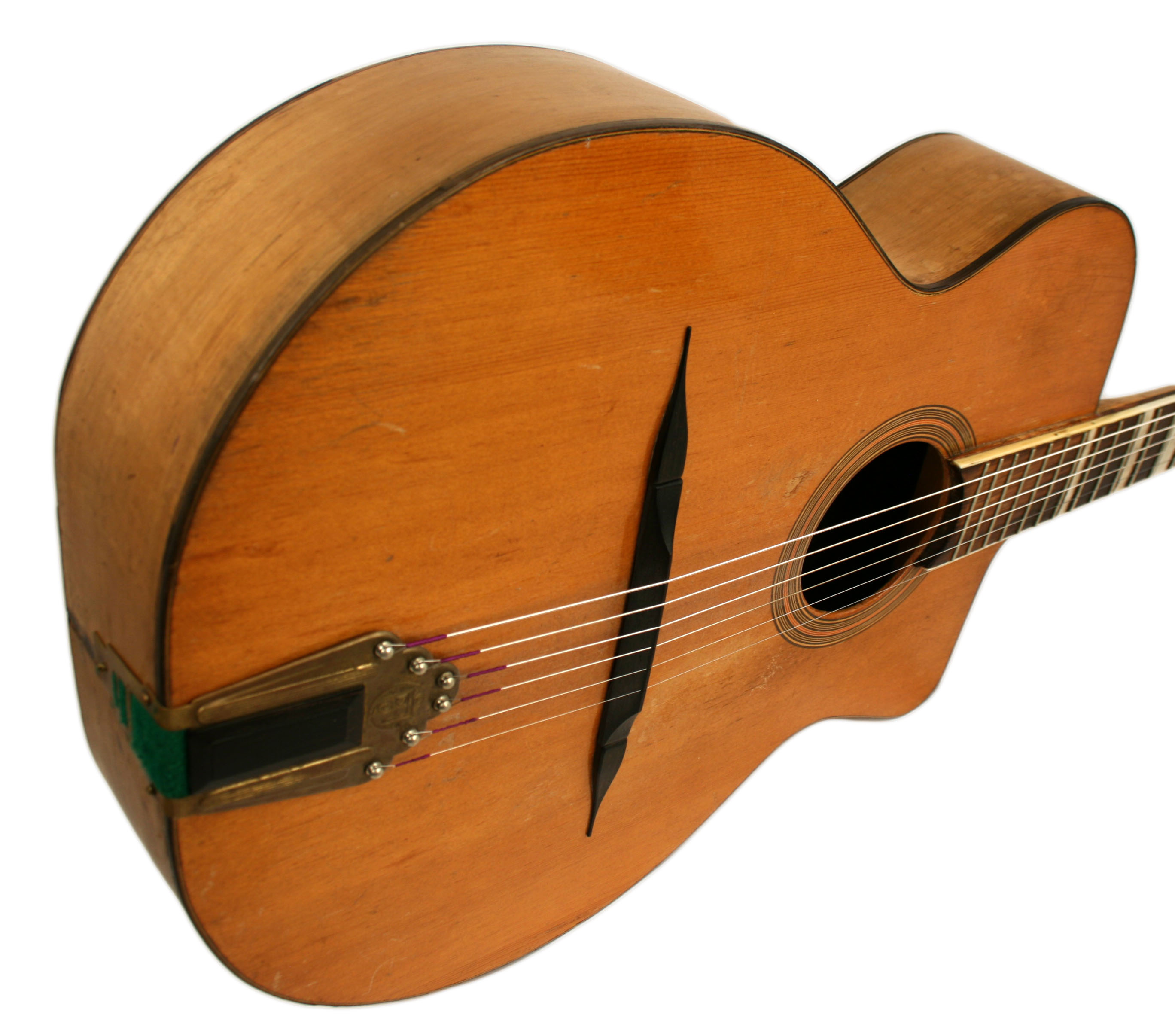 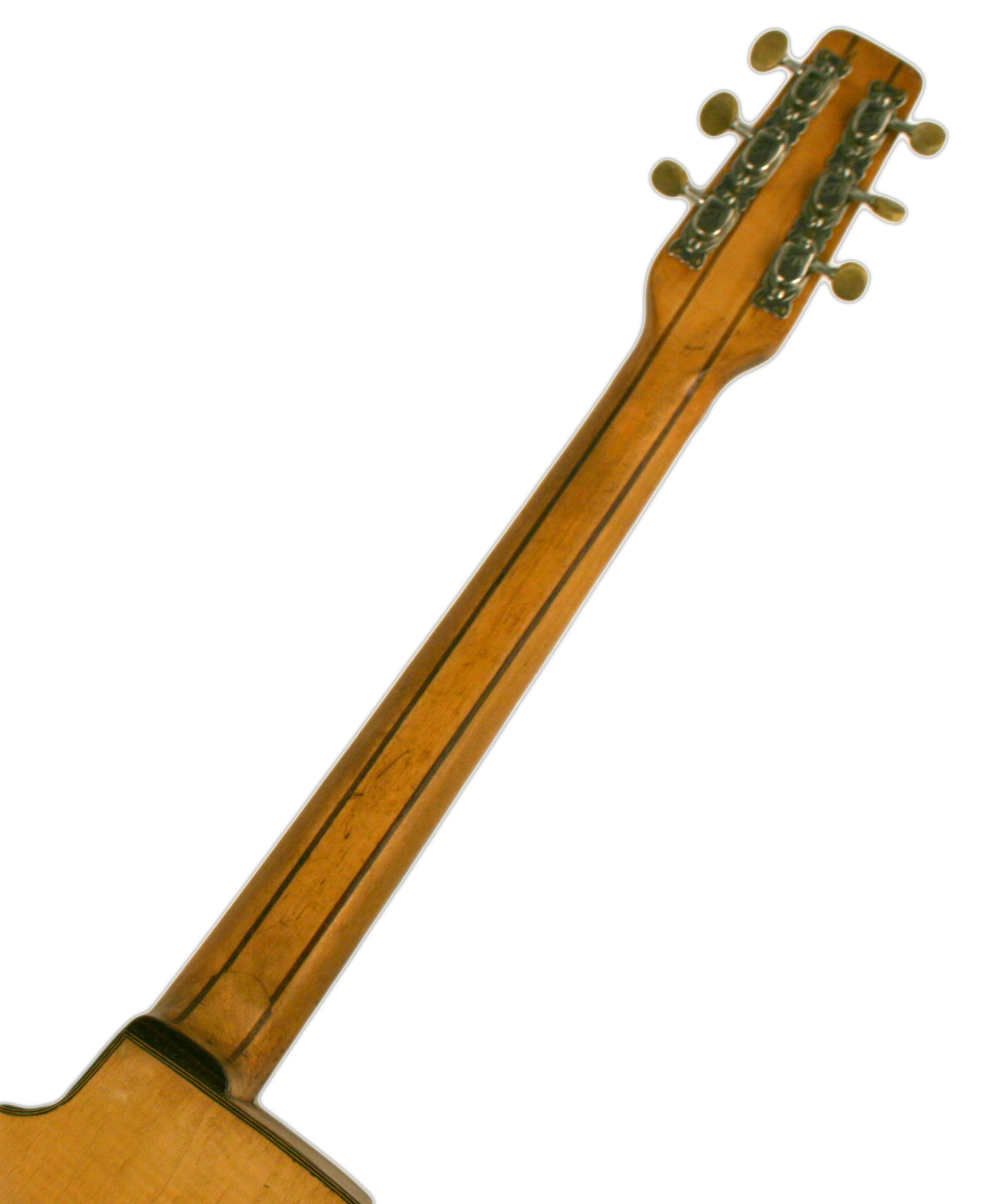 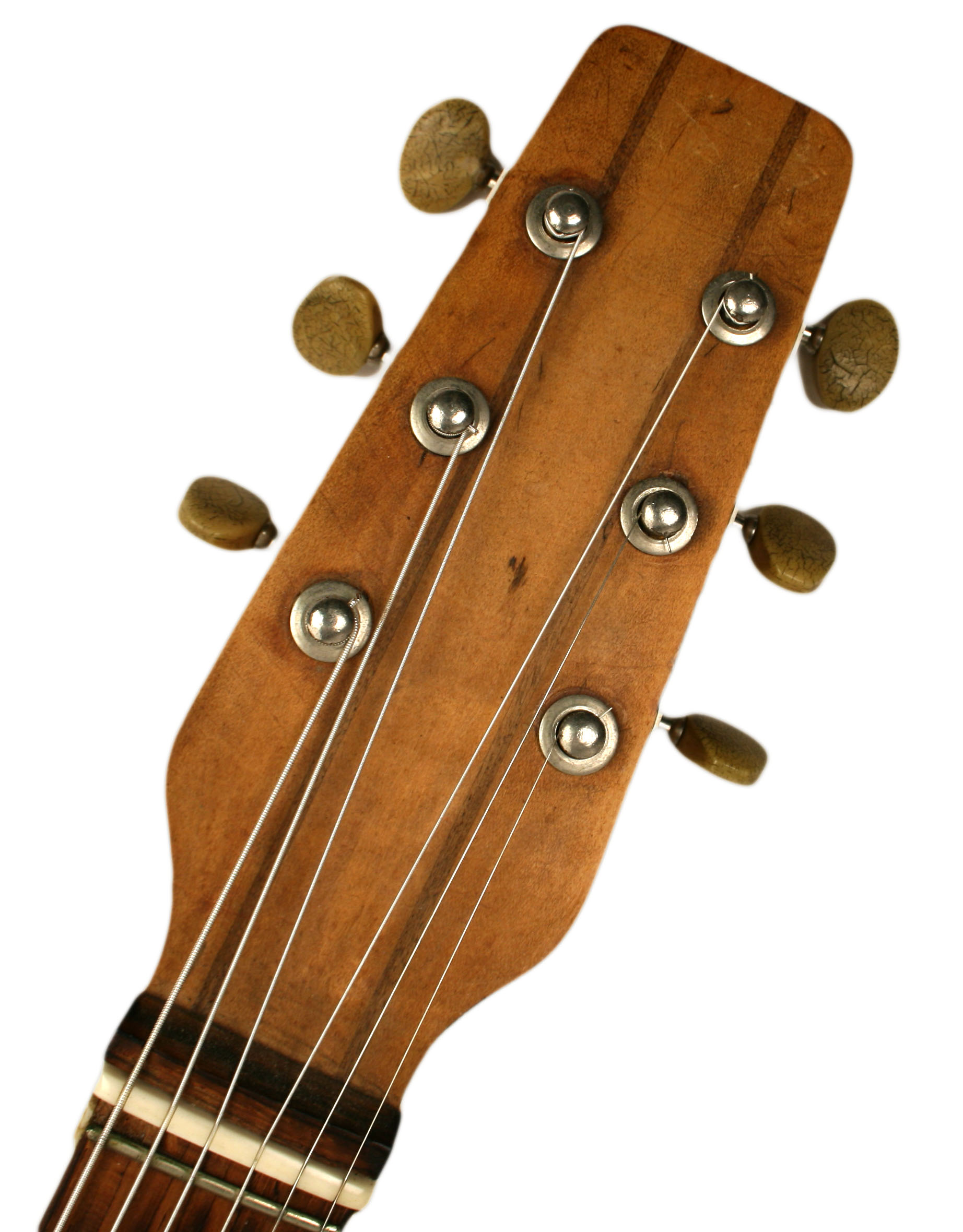 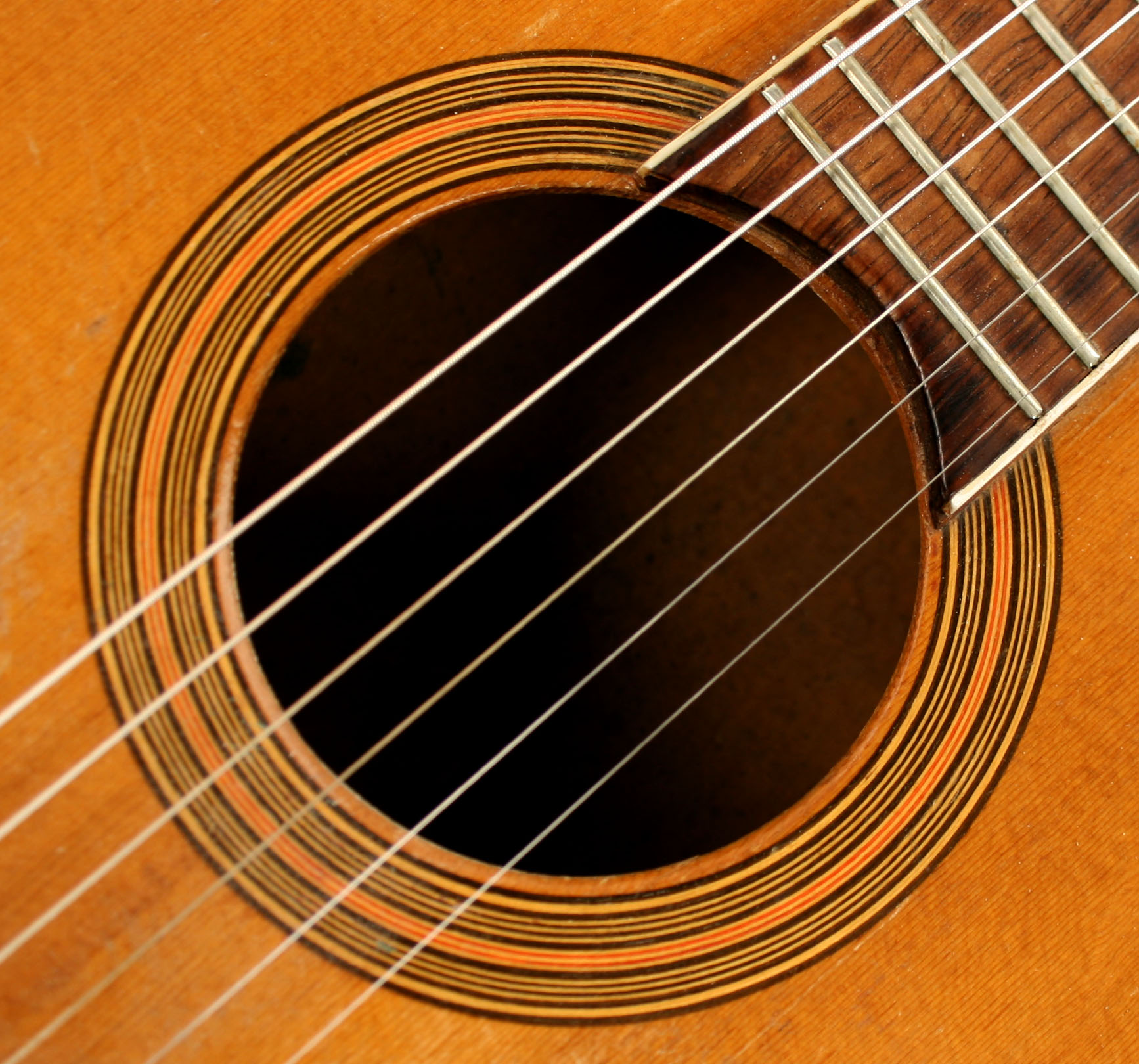 Here is a rare example of an early Jacques Favino guitar from the 1960s! Despite it's unconventional looks, it is a very, very serious instrument with all the bark, volume, and tone you'd expect from the best vintage Favinos, Busatos, Selmers, etc.

Jacques was building two models during this period: the modčle 1A and the fancier modčle 1B. Like the famous Enrico Macias model, this Favino 1B features block MOP fret markers, laminated Maple back and sides, and a spruce top. The fingerboard and headstock are bound and there is a typical Favino three piece maple neck. The frets are like new and the guitar was also refitted with a DR tailpiece and vintage SB tuners.

The overall proportions are significantly smaller then typical Favinos. The body is a comfortable 15" wide, 3 7/8" deep, and the scale length is 635mm.

The top has a beautiful bombe (top arch) which gives the guitar a really explosive tone. The back is also beautifully arched, more so then on most Favinos. It actually looks more like a Busato back which are known for their extreme back arch.

The guitar is strung with 10 gauge Argentine strings and has relatively low action. Very, very easy to play. Tonally the guitar is quite exceptional and compares well with other top rated vintage Gypsy guitars. It's overall tonal characteristic is very bright with a gorgeous singing high end. This guitar will cut through anything and could be described as the ultimate campfire guitar. The small body definitely attenuates the low end focusing more energy into the high frequencies. Interestingly, this guitar doesn't have the typical nasal, midrangey quality of the bigger Favinos. It's actually a bit more like a Busato (but with less low end.): clear, bright, and bell like. This may be partially explained by the shallower neck angle this guitar has...it's neck angle is more like a Selmer then a Favino.

The top seems to be entirely crack free and appears to have been oversprayed at some point. There are a few places that have very small cracks on the lower treble bout and the upper bass bout. These don't seem serious and don't appear very deep. There is also a place close to the tailpiece were there is some separation of the binding. At some point there was a strap peg in the heel but it was removed with only the hole remaining.