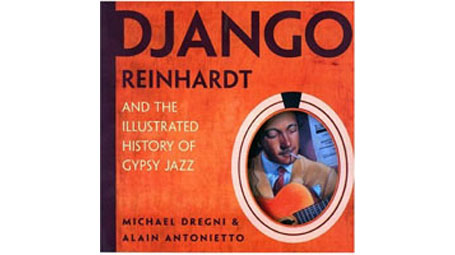 Gypsy Jazz is a music both joyous and sad, timeless and modern. It was born from a marriage of Louis Armstrongs trumpet with the anguished sound of Romany violin and the fire of flamenco guitar. Created amidst the glamour of Jazz Age Paris and reaching a peak during the horrors of World War II, Gypsy Jazz gave a voice to a dispossessed people. Today, Gypsy Jazz is more popular than ever. It has a legacy as strong as the Cuban sounds of the Buena Vista Social Club, the blues of B. B. King, or the R&B of Ray Charles.

Django Reinhardt and the Illustrated History of Gypsy Jazz is a stylish collection of more than two hundred illustrations telling Djangos story and the history of Gypsy jazz. Running through the Paris Jazz Age of the 1920s to the current worldwide renaissance of Gypsy jazz bands (including Djangos grandsons, who are playing today), the images include rare archival photographs, modern images, posters, programs, tickets, guitars, memorabilia, paintings, and more.