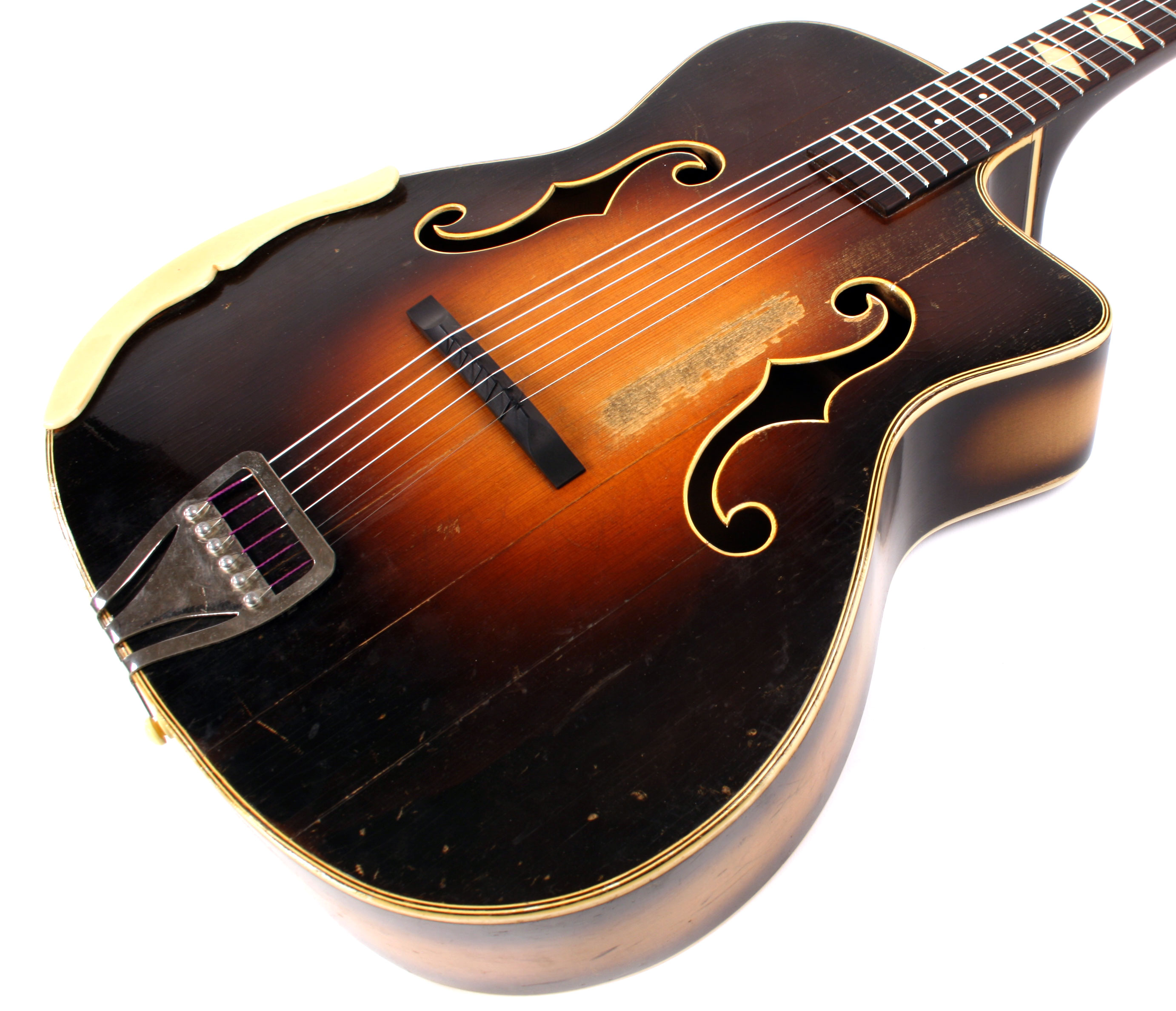 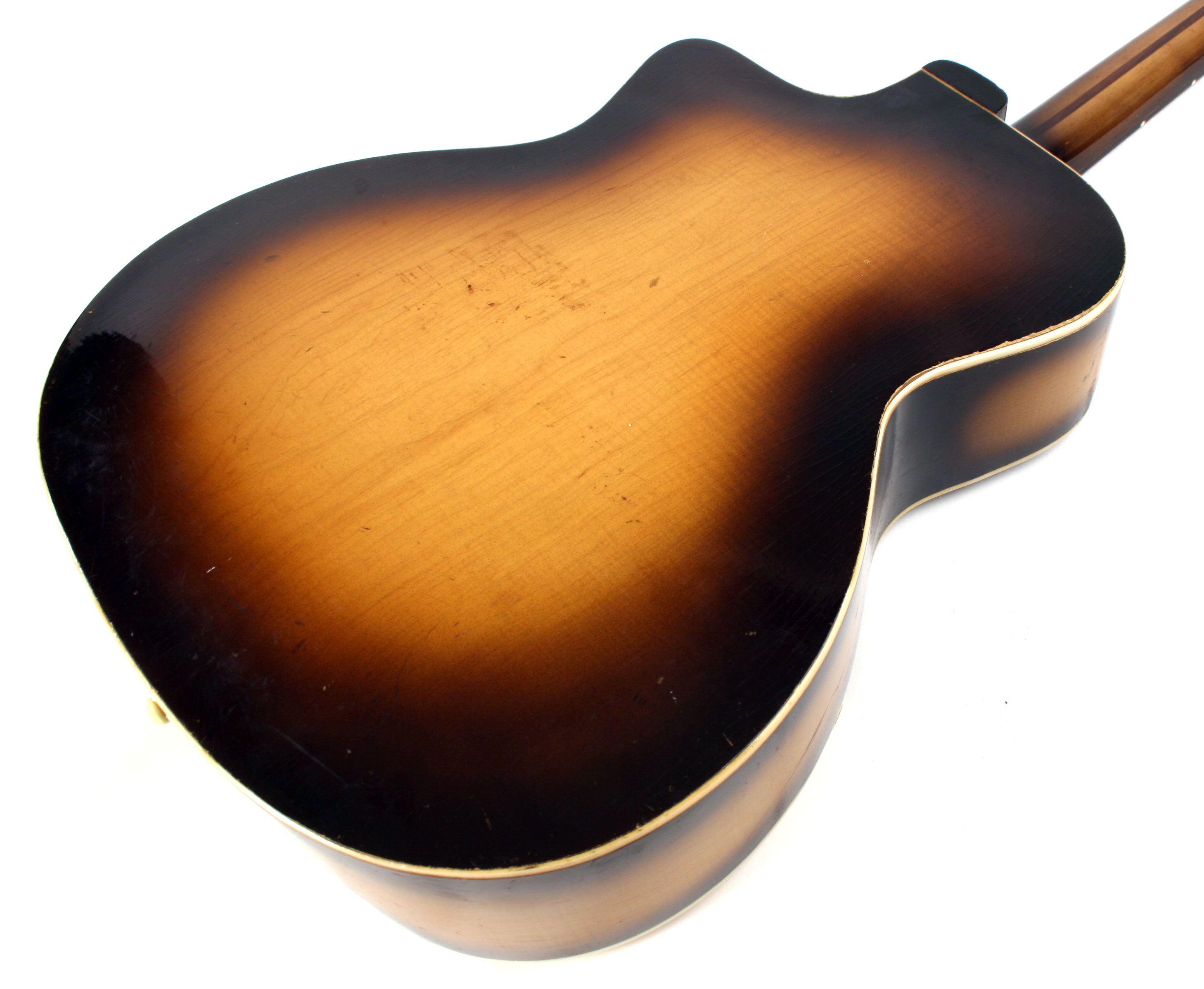 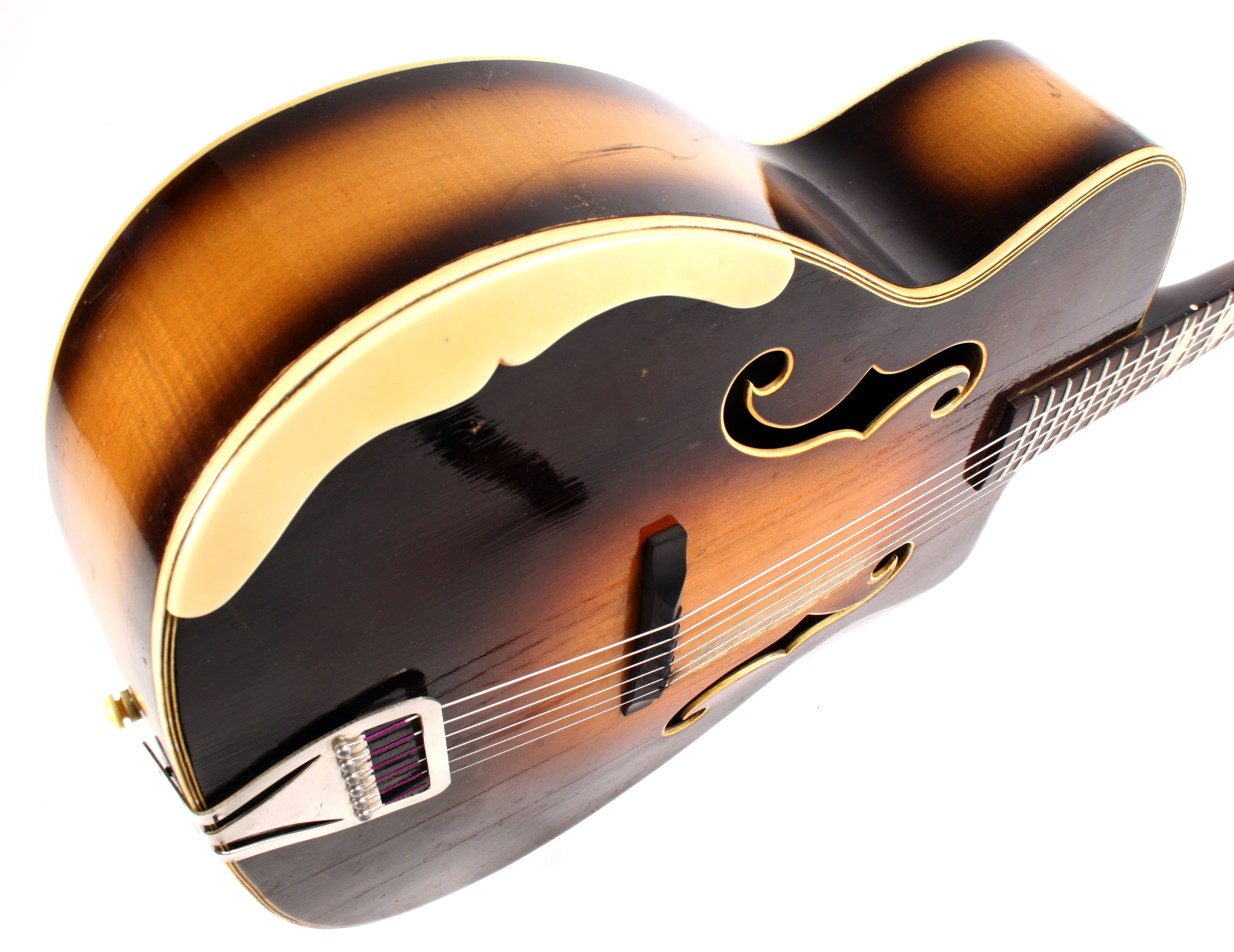 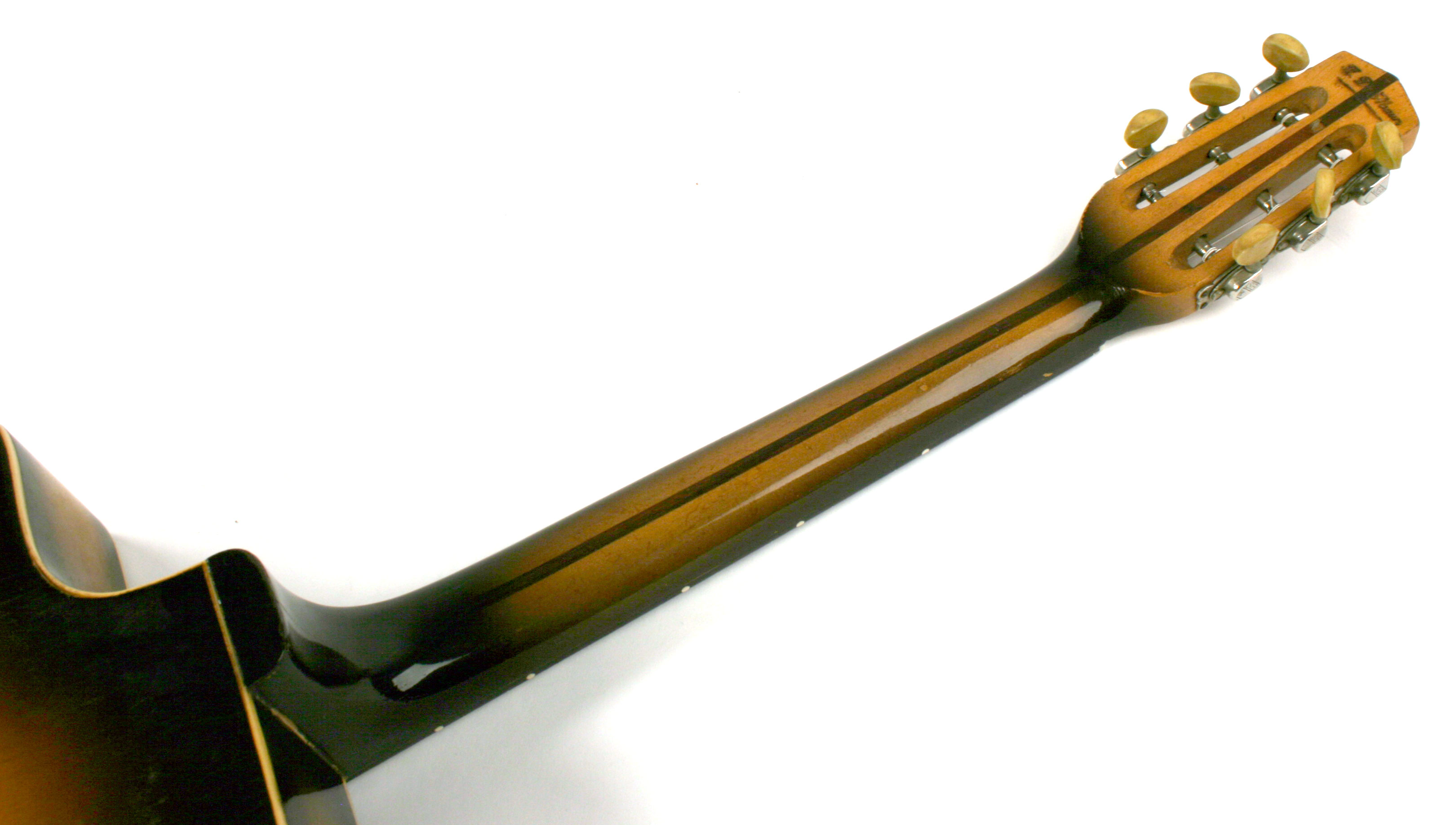 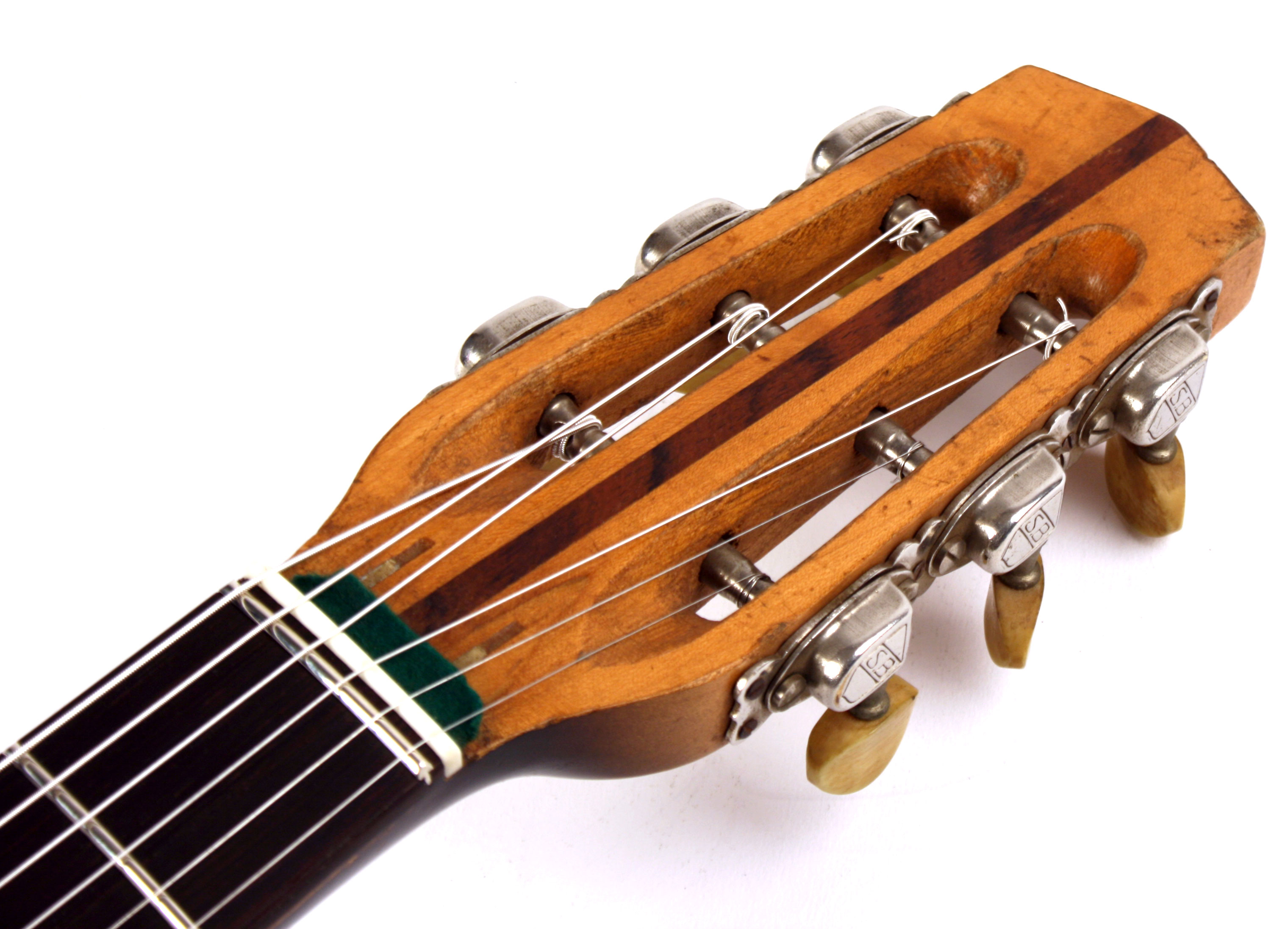 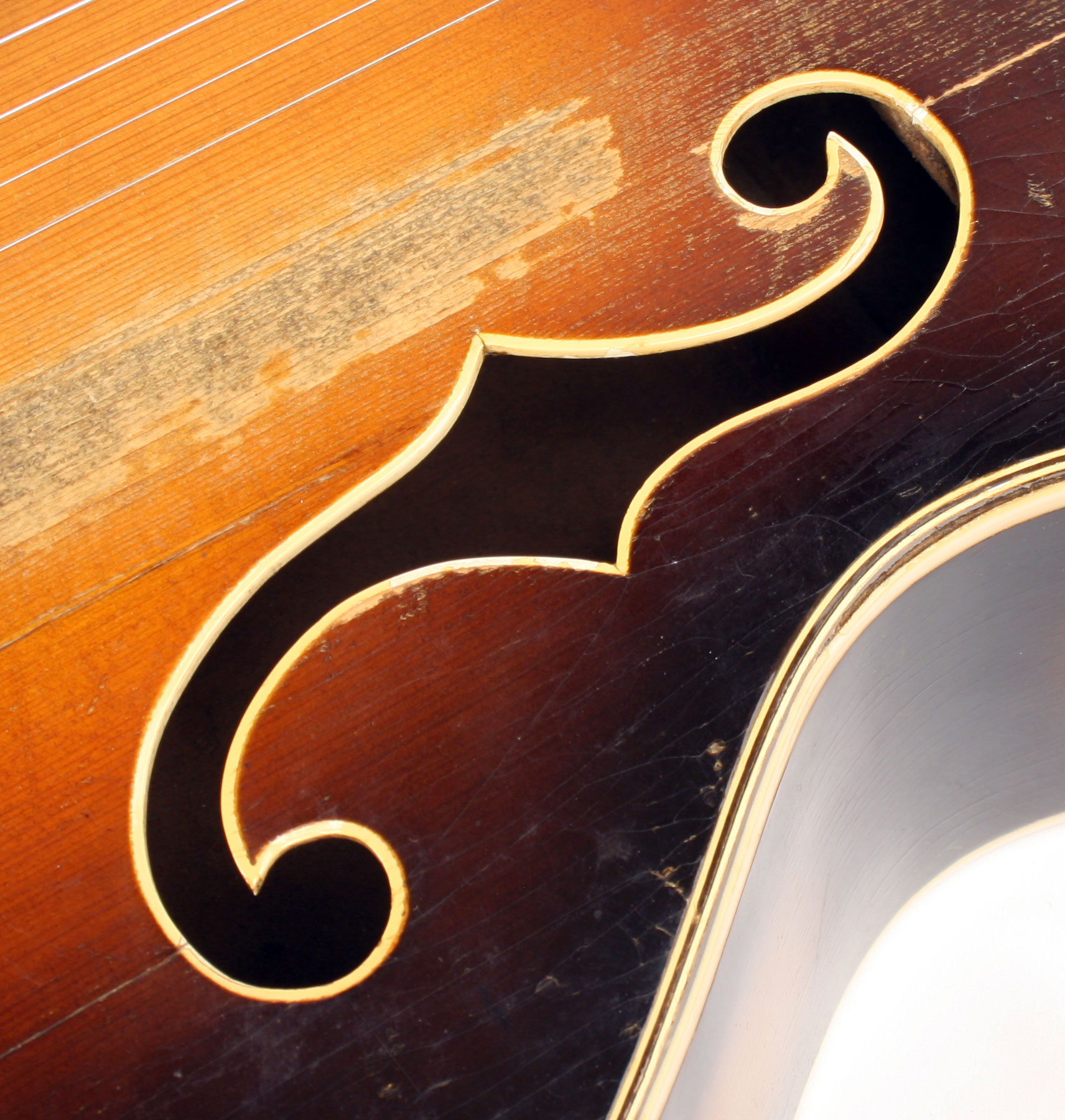 Follow Us Follow Us Follow Us Follow Us
Submit a Review
1940s Di Mauro Special Chorus de Luxe
Antoine Di Mauro was part of the mass emigration of master Sicilian luthiers (Oliveri, Anastasio, etc) who left Catania in the early 20th century. In the 1930s Di Mauro and his countrymen setup a series of shops on the East side of Paris and quickly adapted their skills to making jazz guitars in the Selmer Maccaferri style. Di Mauro was certainly one of the most successful and long lasting of these Franco-Sicilian luthiers as his guitars were widely adopted by players of many styles. Di Mauro guitars were produced continuously until the early 90s, first by Antoine and then later by his son Joseph. Notable players include Moreno, Boulou Ferre, Patrick Saussois, Samy Daussat, Jean-Yves Dubanton, and even Pat Metheny!

Of all the models Di Mauro produced, the Special Chorus is easily their most well known design. A hybrid of American archtop and Selmer Maccaferri designs, the Special Chorus combines the Maccaferri style body and bent top with archtop style F soundholes. The result is a guitar that has the acoustic power of a traditional Gypsy guitar but with the midrange focus and clarity of an archtop.

This is the de luxe version of the Special Chorus, hence it was built with the highest quality materials and features more ornate details then you'll find on Di Mauro's more pedestrian models. The back and sides are maple, the top is spruce, and the neck is built in the typical Franco-Italian style by combing mahogany with a rosewood spline for reinforcement. Aesthetic upgrades include the diamond shaped MOP fingerboard inlays, ivoroid side and soundhole binding, an ivoroid arm rest, and a striking sunburst finish. The original nickel SB tuners and distinctive Di Mauro tailpiece are still intact. It's a real looker and onstage it's nothing short of a Gypsy jazz fashion statement.

Sonically this guitar is an absolute treasure! We find that once a guitar passes the age of 60, something very special happens to the tone. Guitars of this age posses a mature sound that is dry and clear, with a unique character that only age can bring. This wonderful Di Mauro is a perfect example of this phenomenon as it yields a sublime tone that greener guitars lack.  In addition to being quite loud, this instrument is most memorable for its midrange focus and clarity. Chords are very punchy and the superior highend response produces single note lines are spicy and crisp. I find this guitar and absolute joy to play and I think you will too.

The condition very good, especially considering the guitar's age. There are a few cracks on the treble side of the top. One on the lower bout which isn't very deep and looks like it was repaired with just a little glue. A larger crack runs from the the middle of the f hole to the rim and was cleated. There is also another crack from the top of the treble f hole to the cutaway and that was cleated as well. The MOP fingerboard inlay at the 14th fret looks like it was replaced as it doesn't match the color of the other inlays. The guitar was completely restored, including new frets. It plays perfectly, with low 2.8mm action.

The Di Mauro Special Chorus de Luxe model is exceedingly rare so don't miss this opportunity to own an instrument that not only has an impressive pedigree, but sounds great as well!