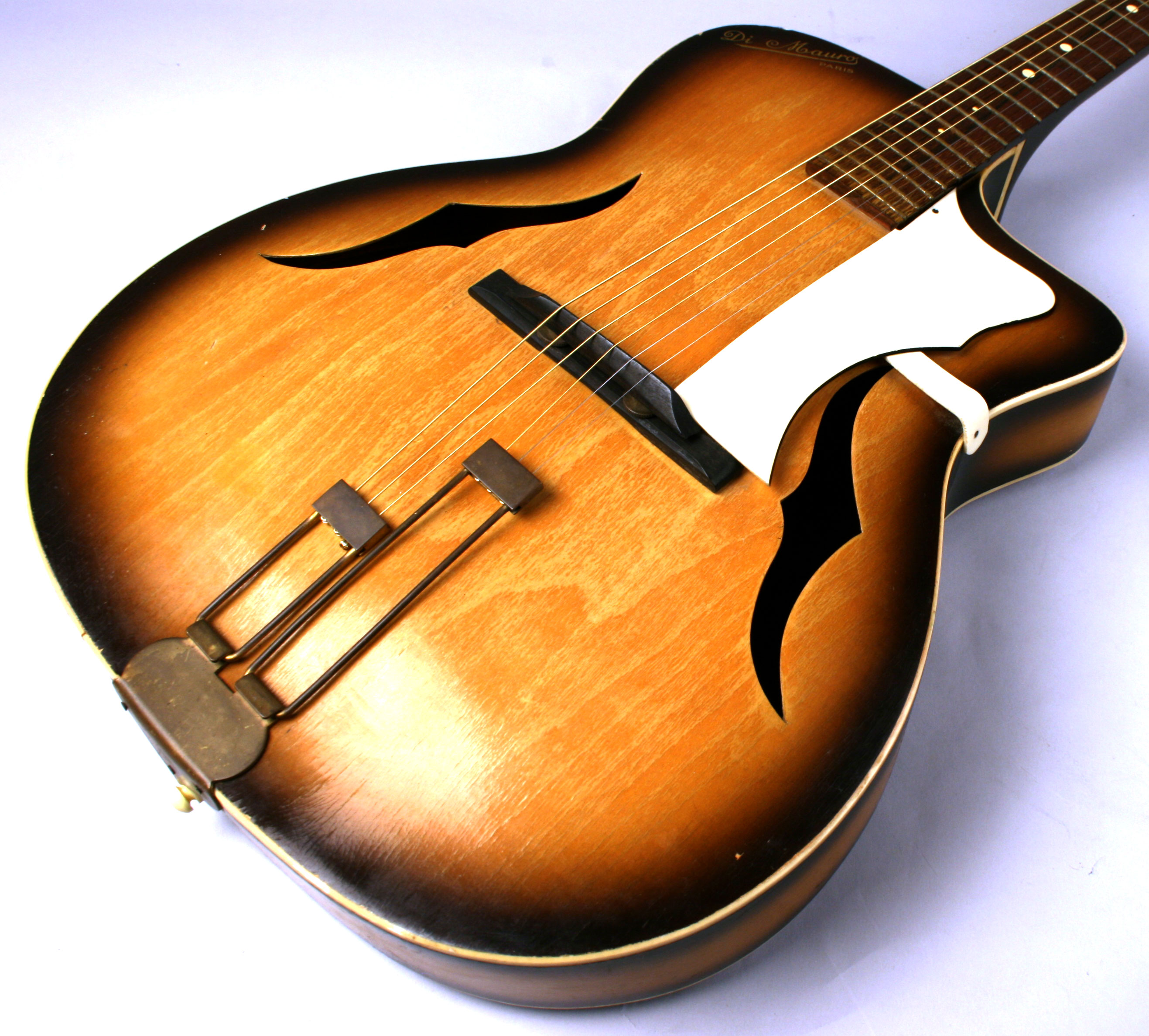 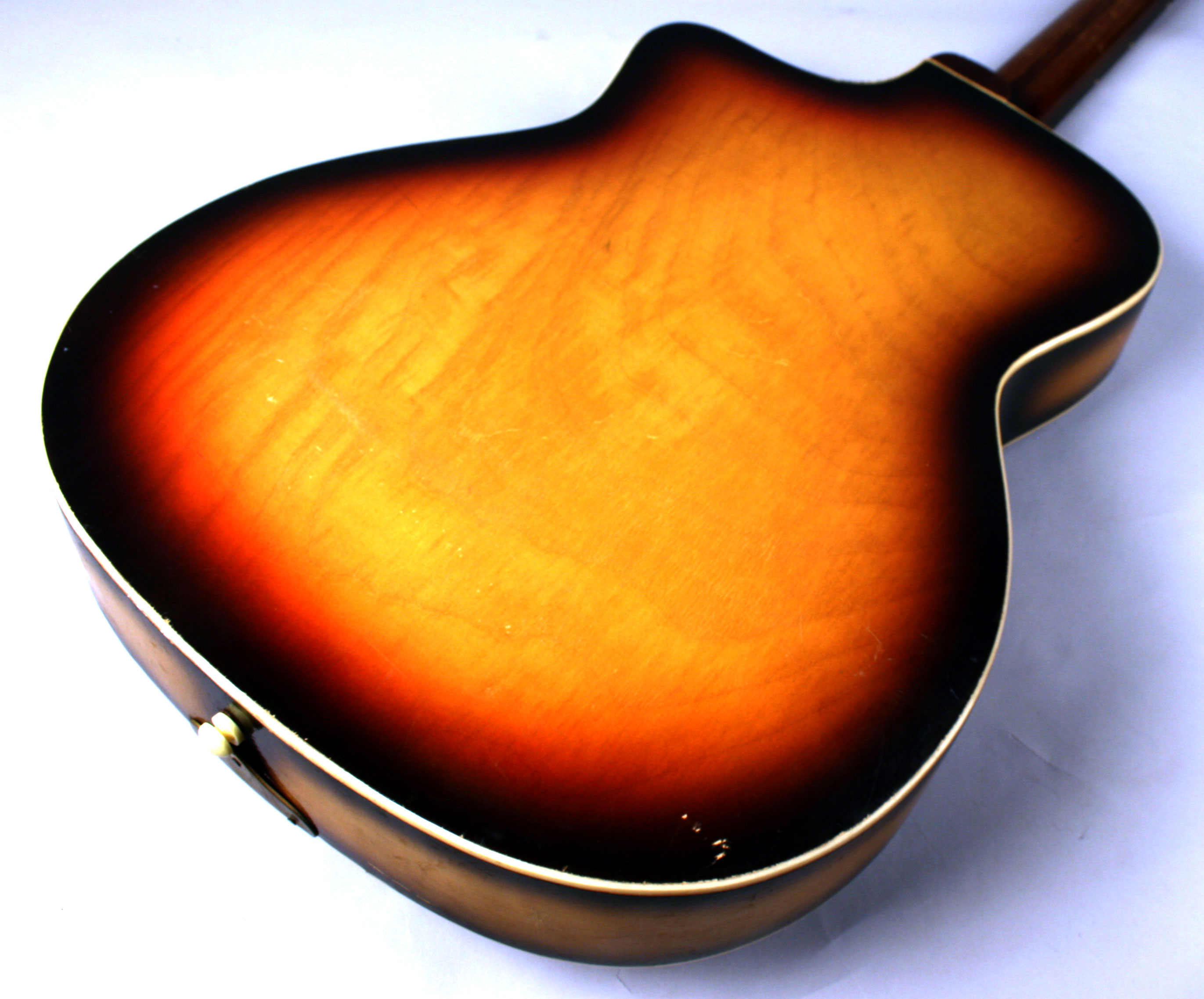 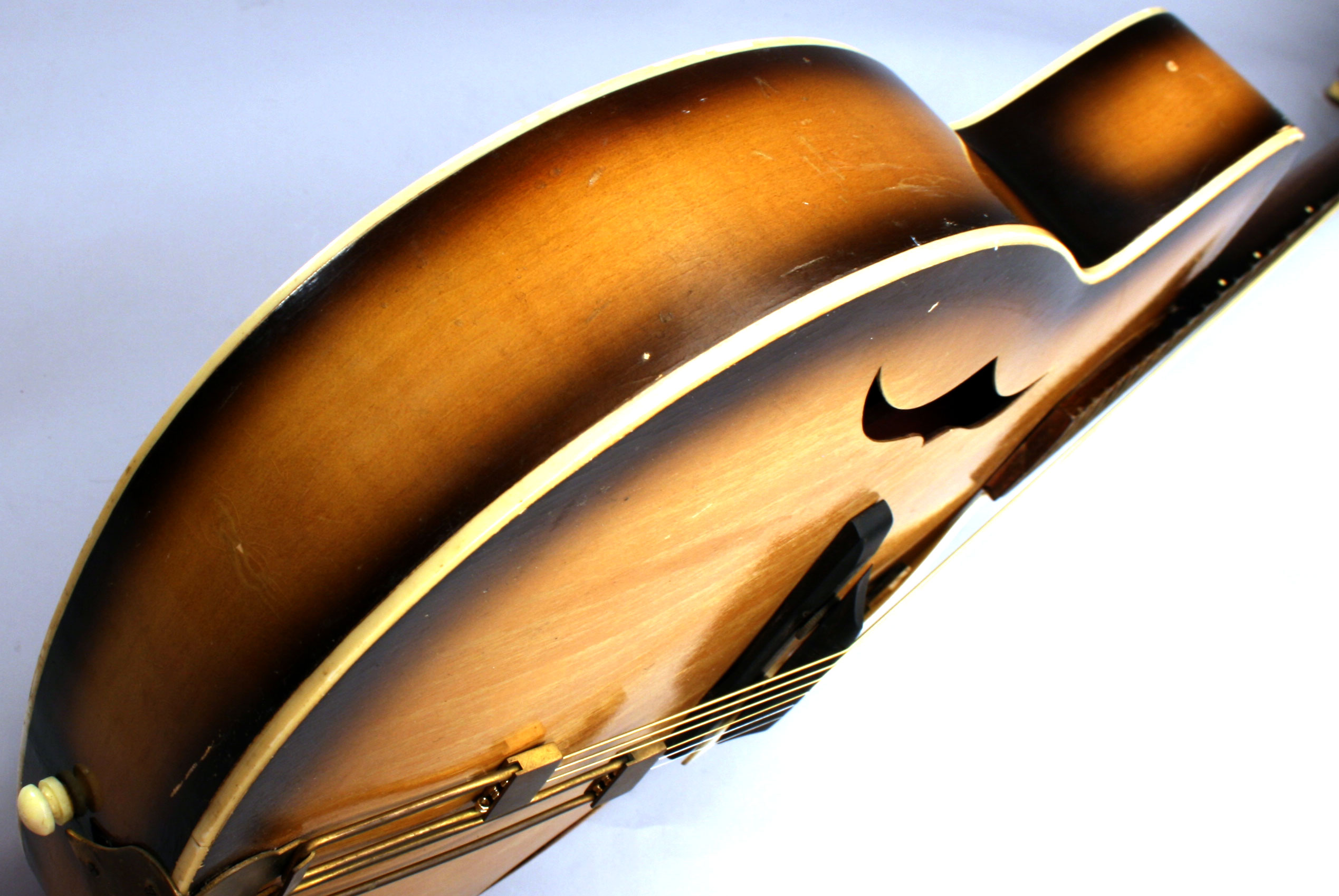 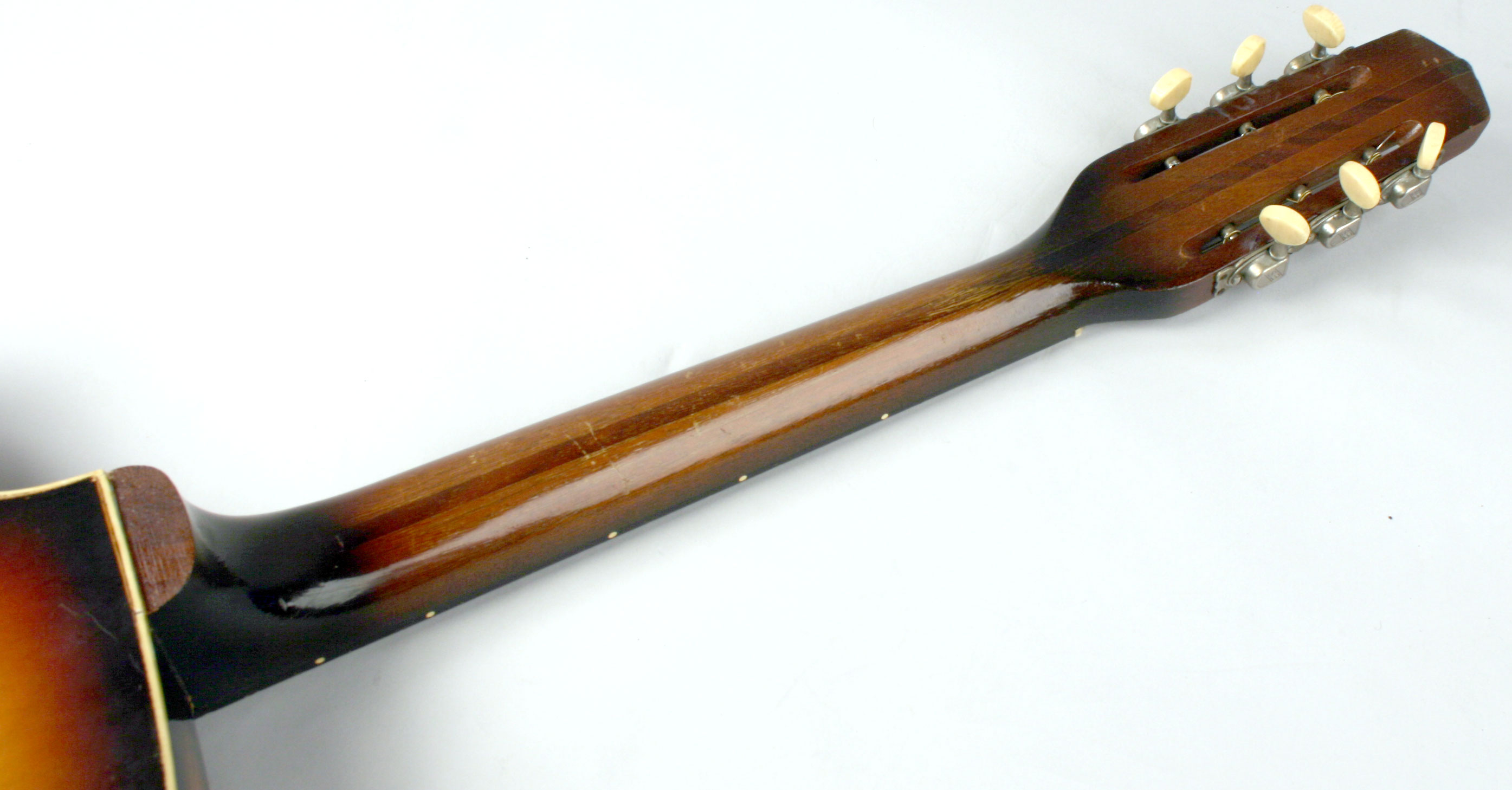 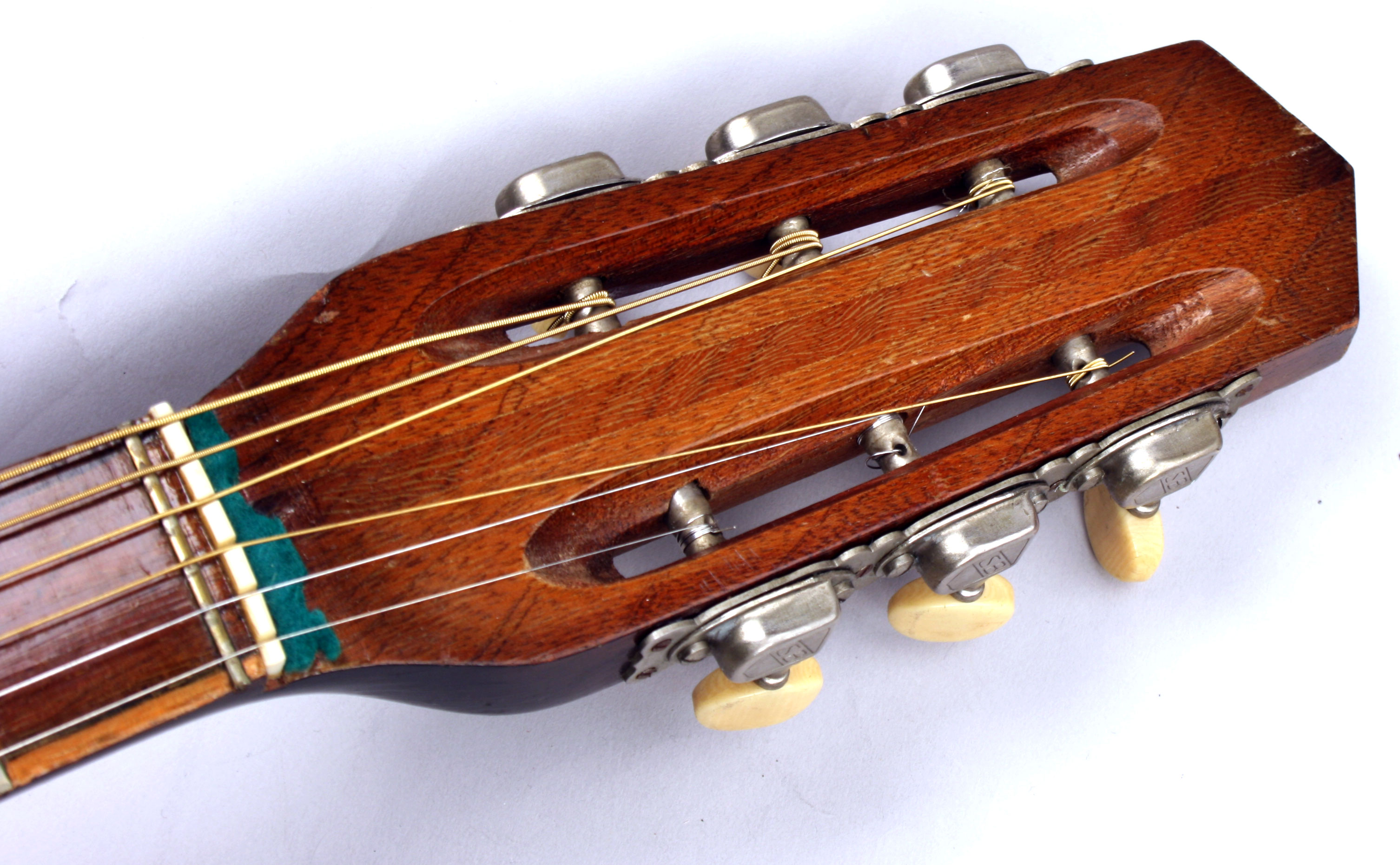 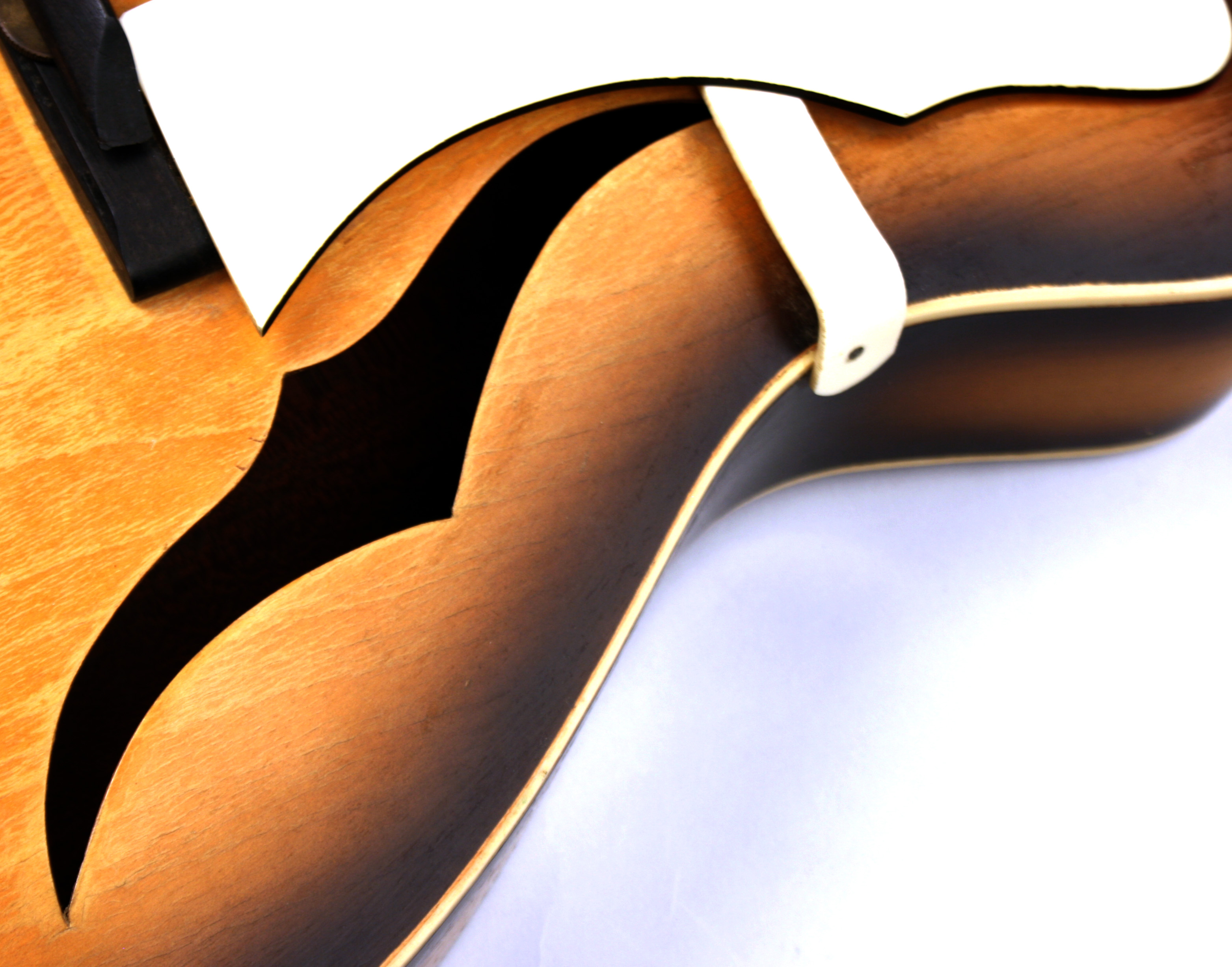 Antoine Di Mauro was part of the mass emigration of master Sicilian luthiers (Busato, Oliveri Anastasio, etc) who left Catania in the early 20th century. In the 1930s Di Mauro and his countrymen setup a series of shops on the East side of Paris and quickly adapted their skills to making jazz guitars in the Selmer Maccaferri style. Di Mauro was certainly one of the most successful and long lasting of these Franco-Sicilian luthiers as his guitars were widely adopted by players of many styles. Di Mauro guitars were produced continuously until the early 90s, first by Antoine and then later by his son Joseph. Notable players include Moreno, Boulou Ferre, Patrick Saussois, Samy Daussat, Jean-Yves Dubanton, and even Pat Metheny!

This rare Mod. E 0 was Di Mauro's electric model. However, this is the version they built without the pickup. The Mod. E 1 was fitted with a magnetic pickup with volume and tone controls. The Mod. E 2 had two pickups and even more knobs. The Mod. E 0 was built for those just wanted to play this model acoustically or wanted to install their own pickup. This example shows no signs of ever having a pickup.

Easily one of Di Mauro's smallest models, the E 0 features a narrow 15 5/8" lower bout with a slim body depth of only 2 3/4". The scale length is also very short, just 24" (610mm) and the nut width is 1 5/8". Compact and lightweight, this instrument is perfect for the diminutive player. It is also an exclellent choice for someone looking for a more ergonomic instrument that is both easily transportable and effortless to play.

A hybrid of archtop and Selmer Maccaferri designs, this instrument combines the Maccaferri style body and bent top with typical archtop features such as stylized F soundholes, a celluloid pickguard, an adjustable bridge, and a frequensator tailpiece. The back and sides are maple, the top is spruce, and the neck is built in thetypical Franco-Italian style by combing mahogany with a rosewood spline for reinforcement. A set of handsome nickel SB tuners are fitted to the headstock.

This guitar produces a delightful tone that is very dry and midrange focused. As a rhythm instrument, it is focused and clear, producing a beam of sound that is well articulated and easily audible. This quality makes this instrument a fantastic choice for larger ensembles that require one not interfere with the other elements of the rhythm section like the piano and bass. Lead lines project very nicely, and not surprisingly it is quite a bit louder than most carved top archtops that can be over 10 times the price!

The condition of this instrument is excellent! It is very well preserved for it's age with just a handful of small scratches, dings, and a bit of finish checking. There is some binding separation on the back near the heel. Otherwise, it's the proverbial closet guitar....