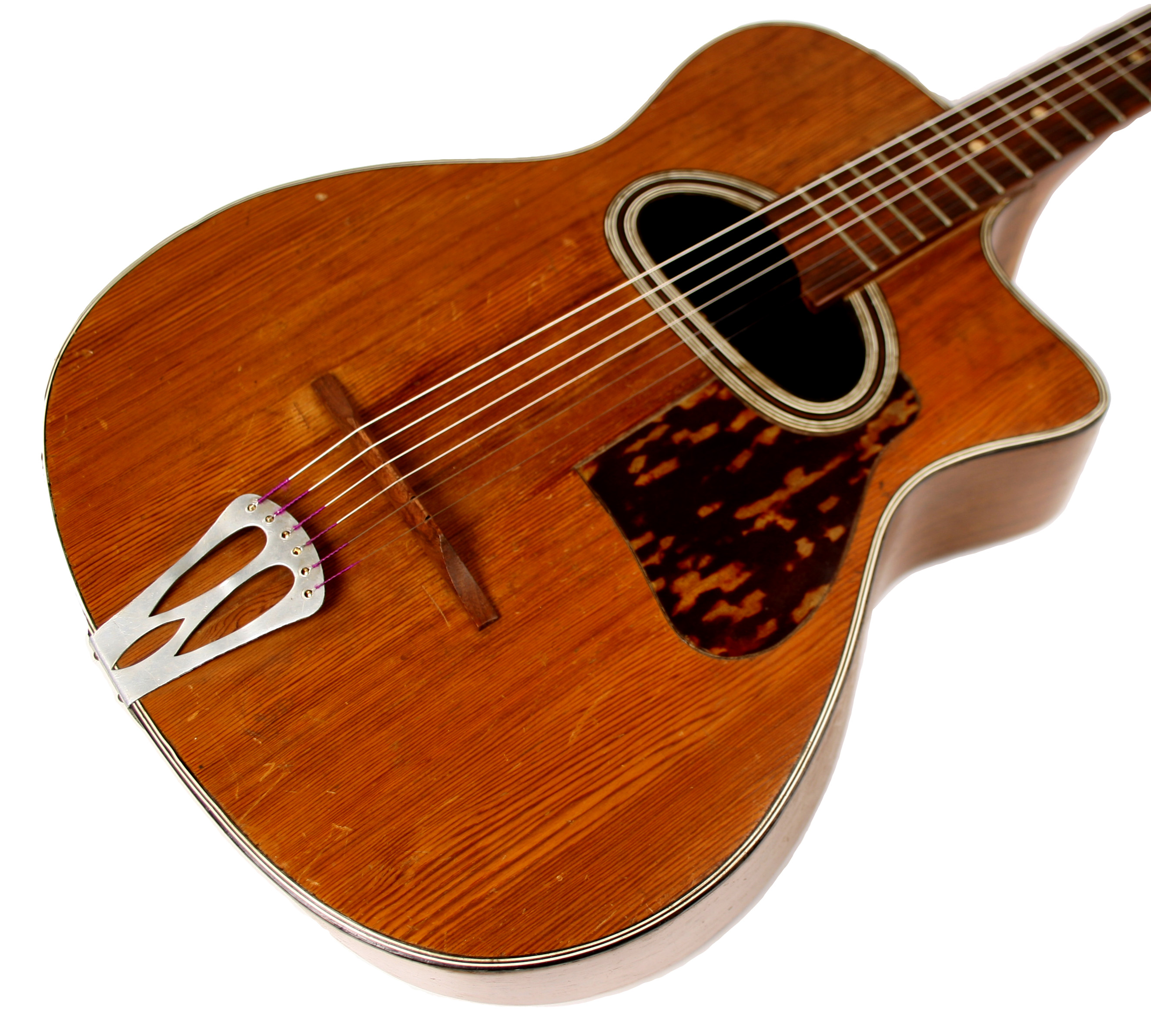 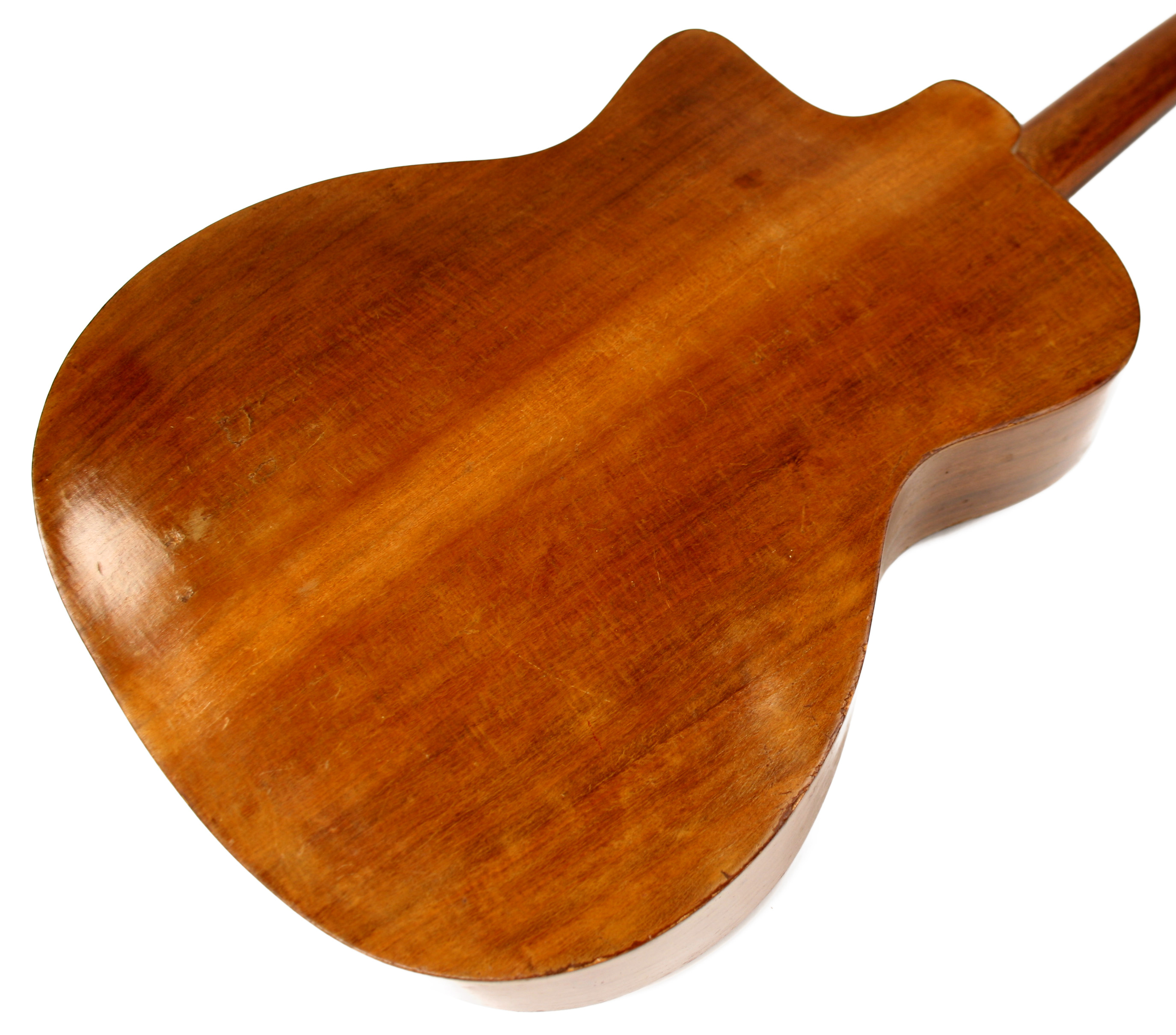 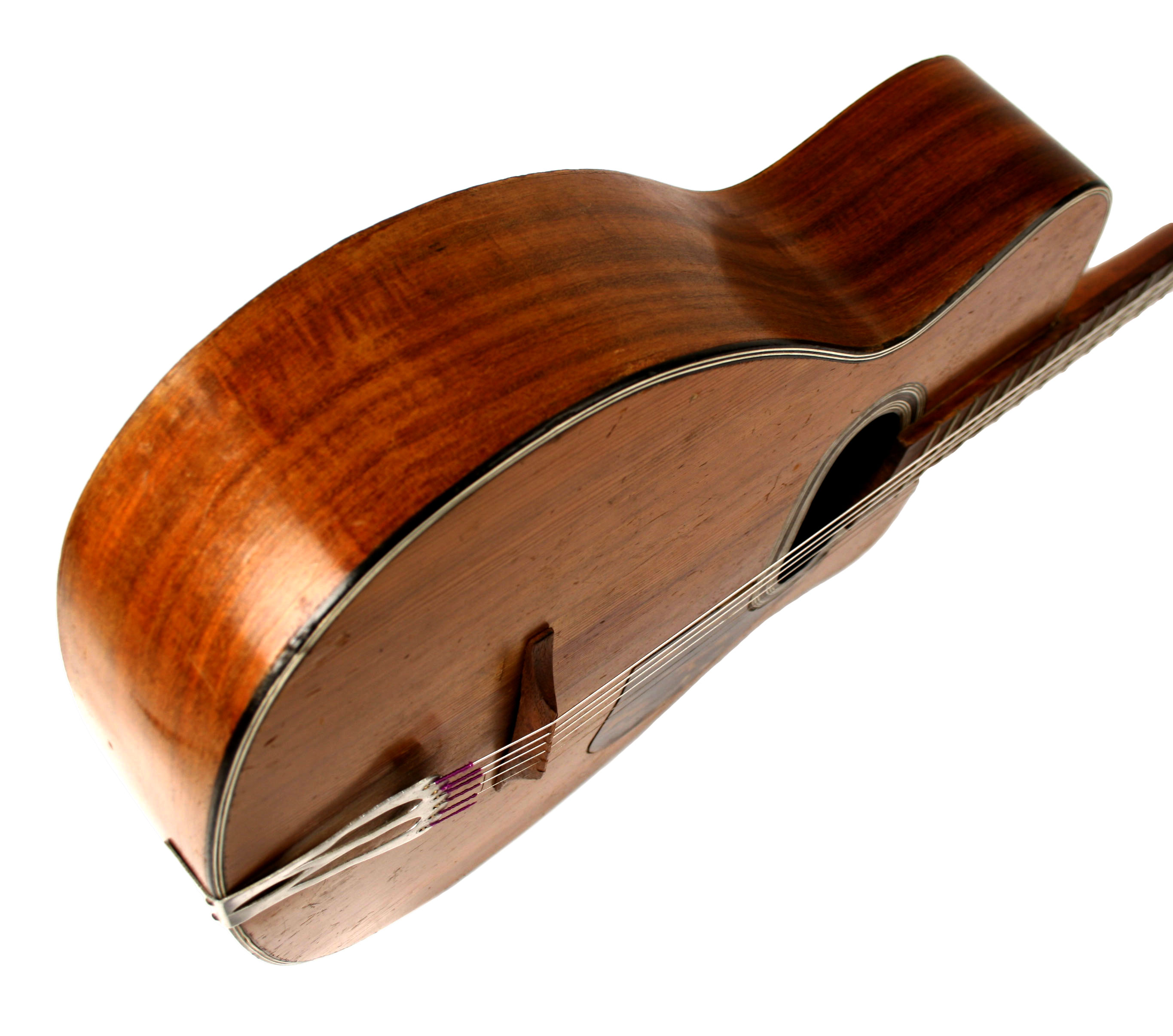 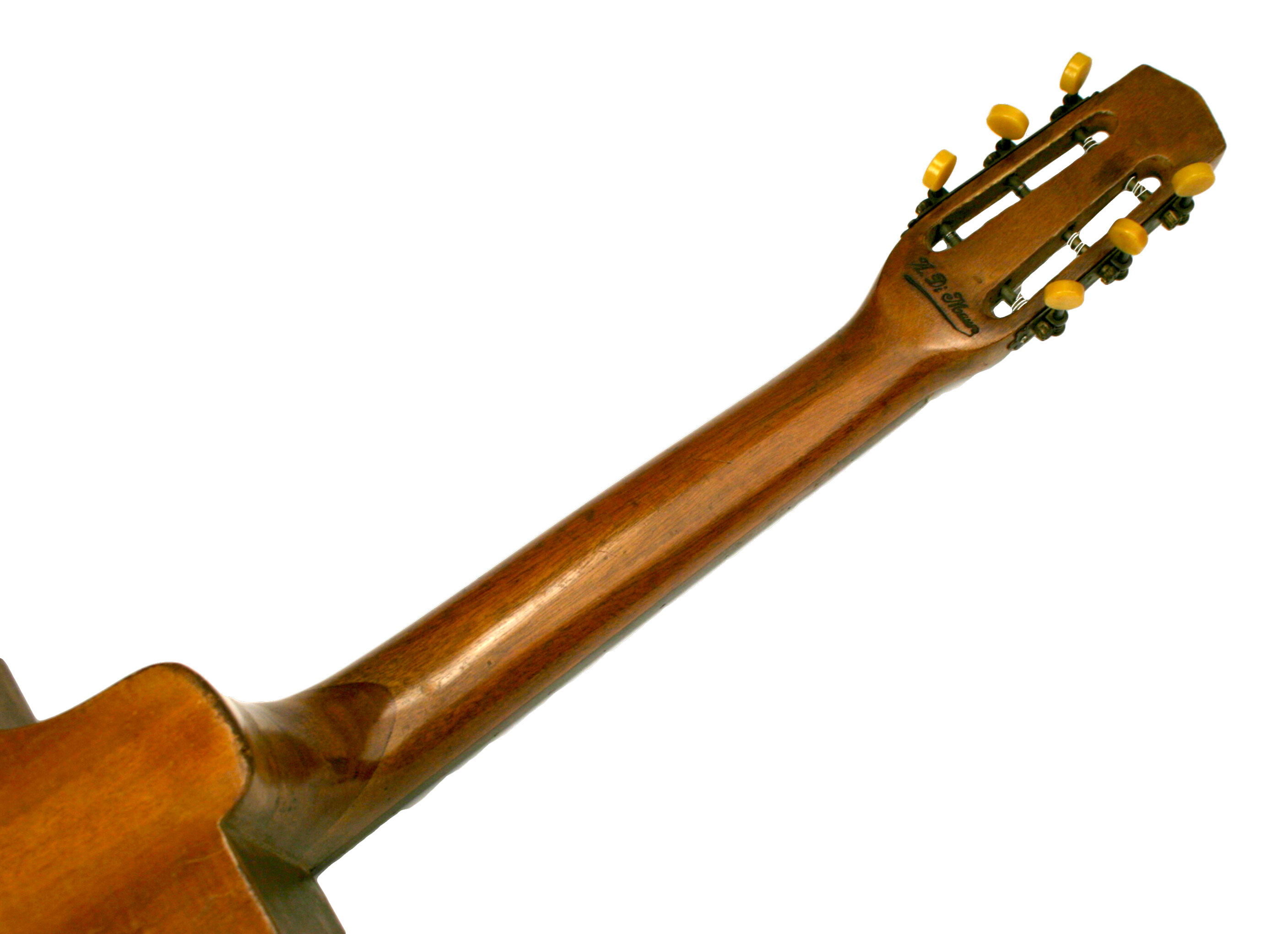 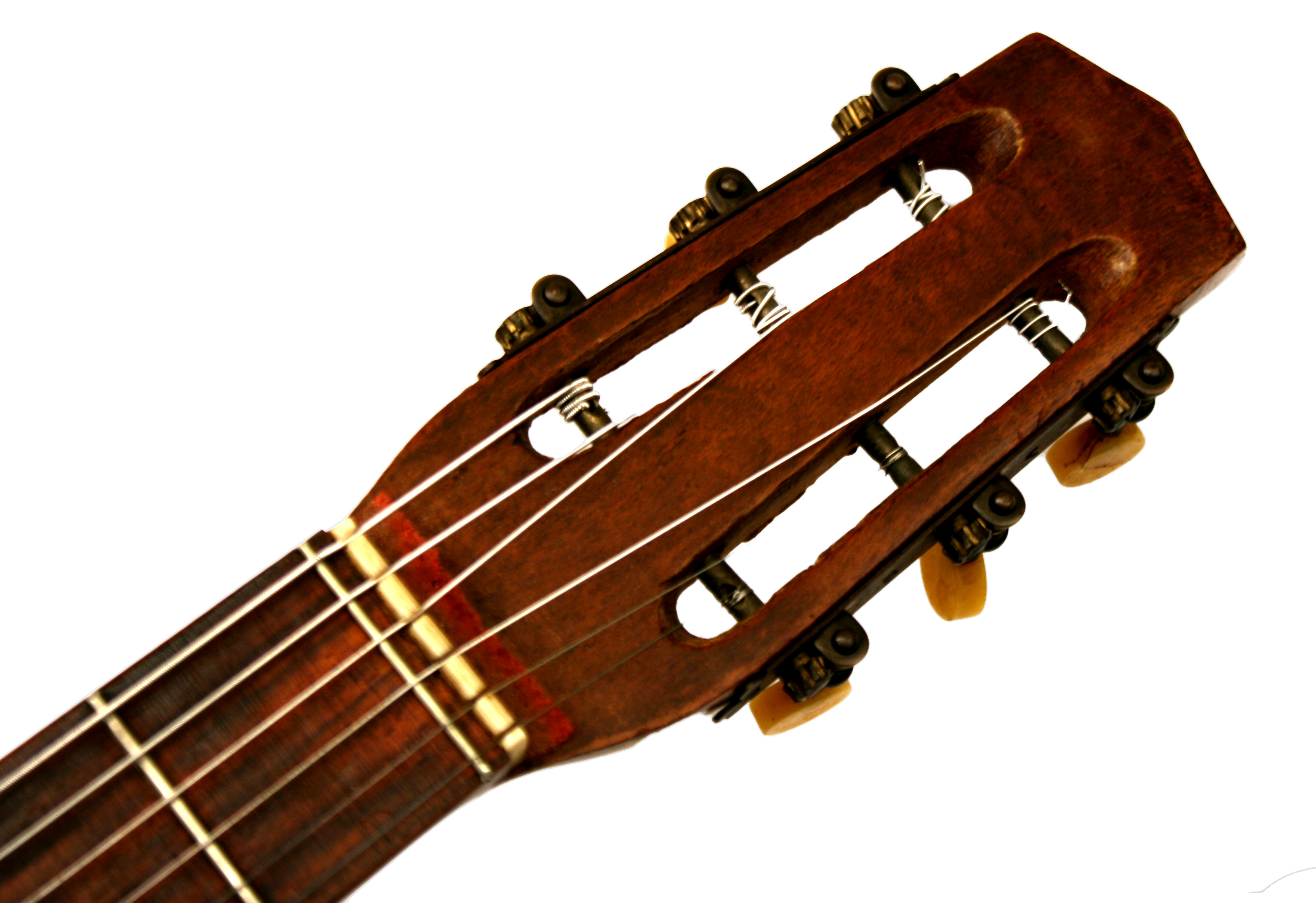 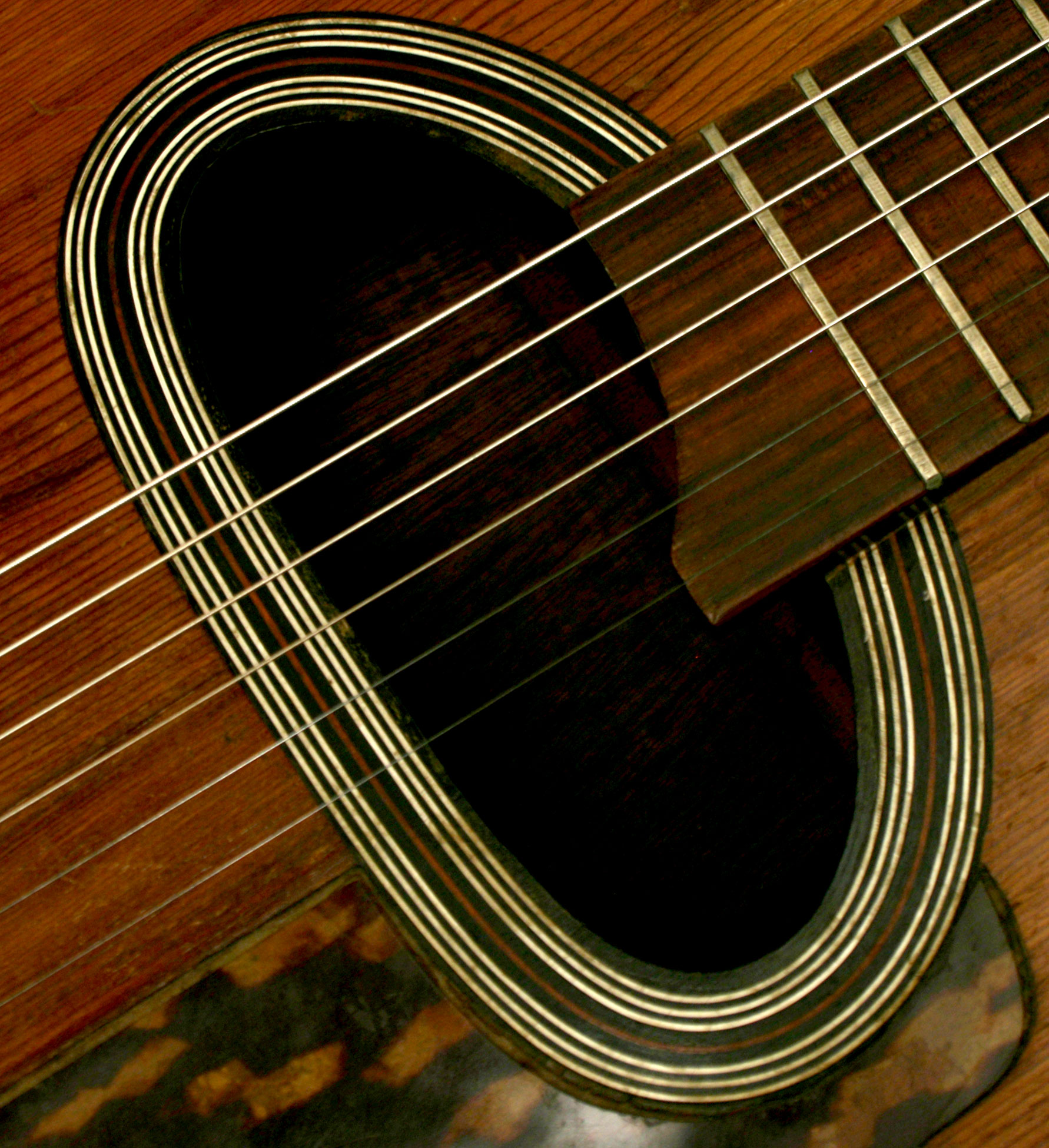 This Boogie Woogie model is Di Mauro's Maccaferri inspired instrument. This well preserved example features an unique 11 fret neck, a very short 635mm scale, and a 16 1/8" body. Tipping the scales at just 3.25 lbs, this is among the lightest Gypsy guitars I've ever come across! The top is spruce, the back and sides are Cuban mahogany, the neck is mahogany, and the fingerboard is rosewood. The top binding is ebony which is decorated with 5 ply purfling. The Maccaferri inspired rosette features 14 black and white bands with a red center band. The tailpiece, tuners, and the tortoise pickguard are original.

The Boggie Woogie model has long been known as one of the best "pompe" (i.e. rhythm) guitars ever made for Gypsy jazz. The Di Mauro family were deeply in touch with the needs of professional Gypsy guitarists, allowing them to produce instruments which were perfectly suited for the aesthetics of this genre. This wonderful example is no exception as its look and sound transports you back to the mythical cafes and nightclubs of mid-century Paris. Best characterized as "bold" and "gutsy," this instrument's strength lies primarily in the punchy, clear midrange it produces. Chord hits crack like a whip while lush voicings ring full and clear. Additionally, the considerable age of this instrument has worked its magic, adding the character, definition, and clarity we've come to expect from well seasoned instruments.

This guitar is very well preserved for it's age! It has numerous dings and scratches on the top and body, but is free of any serious problems such as cracks or separation. The frets have some very light wear and the instrument plays quite nicely with action set at 3.2mm.

This instrument was previously owned by the renowned Gypsy guitarist Kamlo Barre.

All in all, here's an opportunity to own a wonderful piece of Gypsy jazz history that is well preserved and a joy to play!