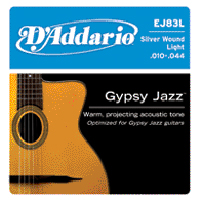 If you try these strings,and you're expecting Argentine"s...these are a different animal. Compared to Argies's, the Daddario's are;stiffer feeling, harder feeling, and have a different tone. Having said that, it's not nessesarily a bad thing, they're just different. Daddario strings are generally made with a "Hex-core", which even with their Electric, Mandolin, Banjo, Phospher Bronze strings, give them a stiffer feel than say, the equivalent Ernie Ball sets, which have a round core. These have more "resistance" than other brands, and I can't say I don't like it, especially for faster runs. They do also hold their tuning far and above the Argie and Pearse sets I've tried. One of the best things about these strings is that they last longer than the other brands I've tried. The strings seem tougher, they don't get dented nearly as much, and the Silver dosent flake off immediately like the Pearse sets do. They stay consistent, but when they die...they really die!! The tone goes very brash and harsh all of a sudden. Time to change em'!! I like using these strings when I'm putting in a lot of practice hours. They hold up, and stay consistent. I will say though, anytime I've had them on at a jam or informal gig, I find them too harsh sounding when blended in with other instruments, too metallic sounding. I've used the ball-end strings in the past, and I figured I'd try a case of these new loop-ends. Daddario uses their colour coding on their ball end strings, but these are plain loop ends, like their Mandolin/Banjo strings. Otherwise, they're the same strings as the old ones.