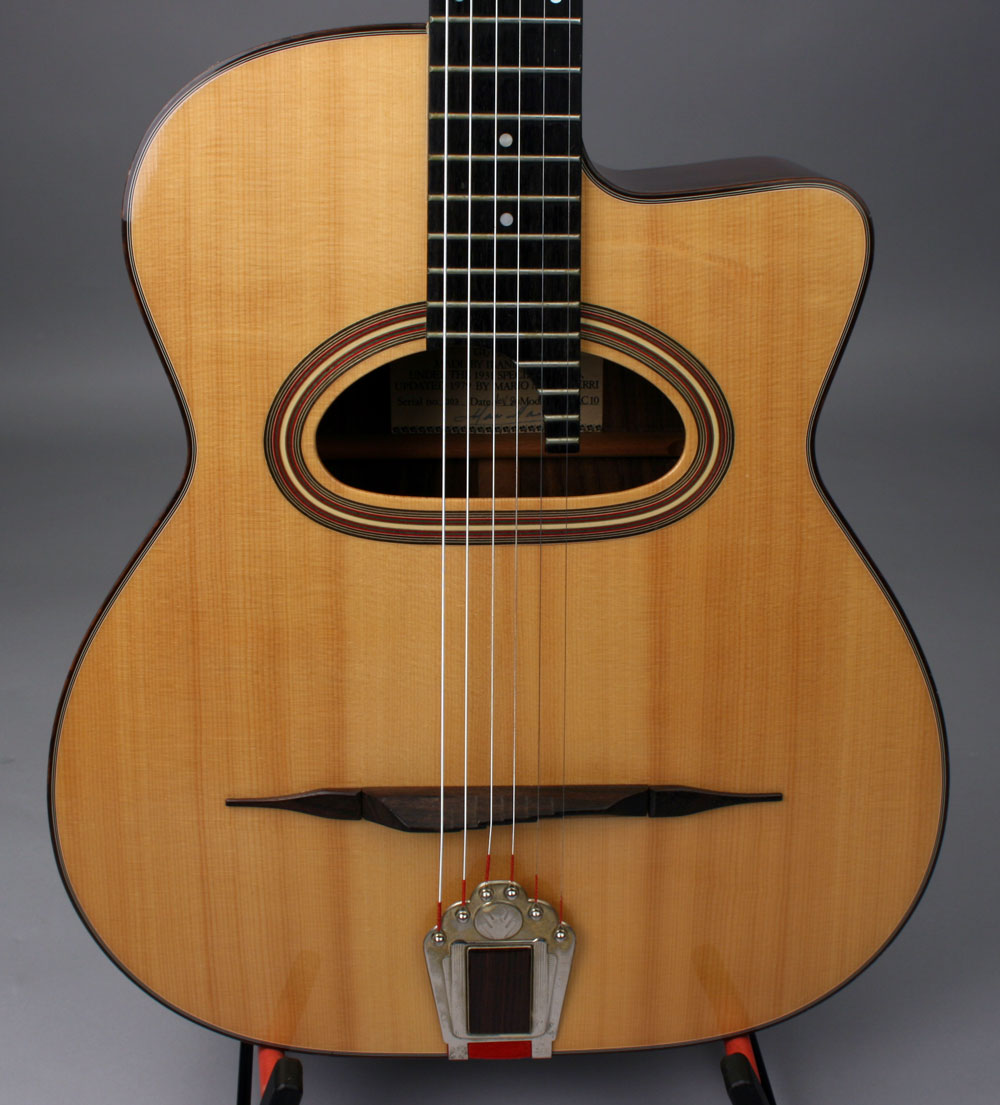 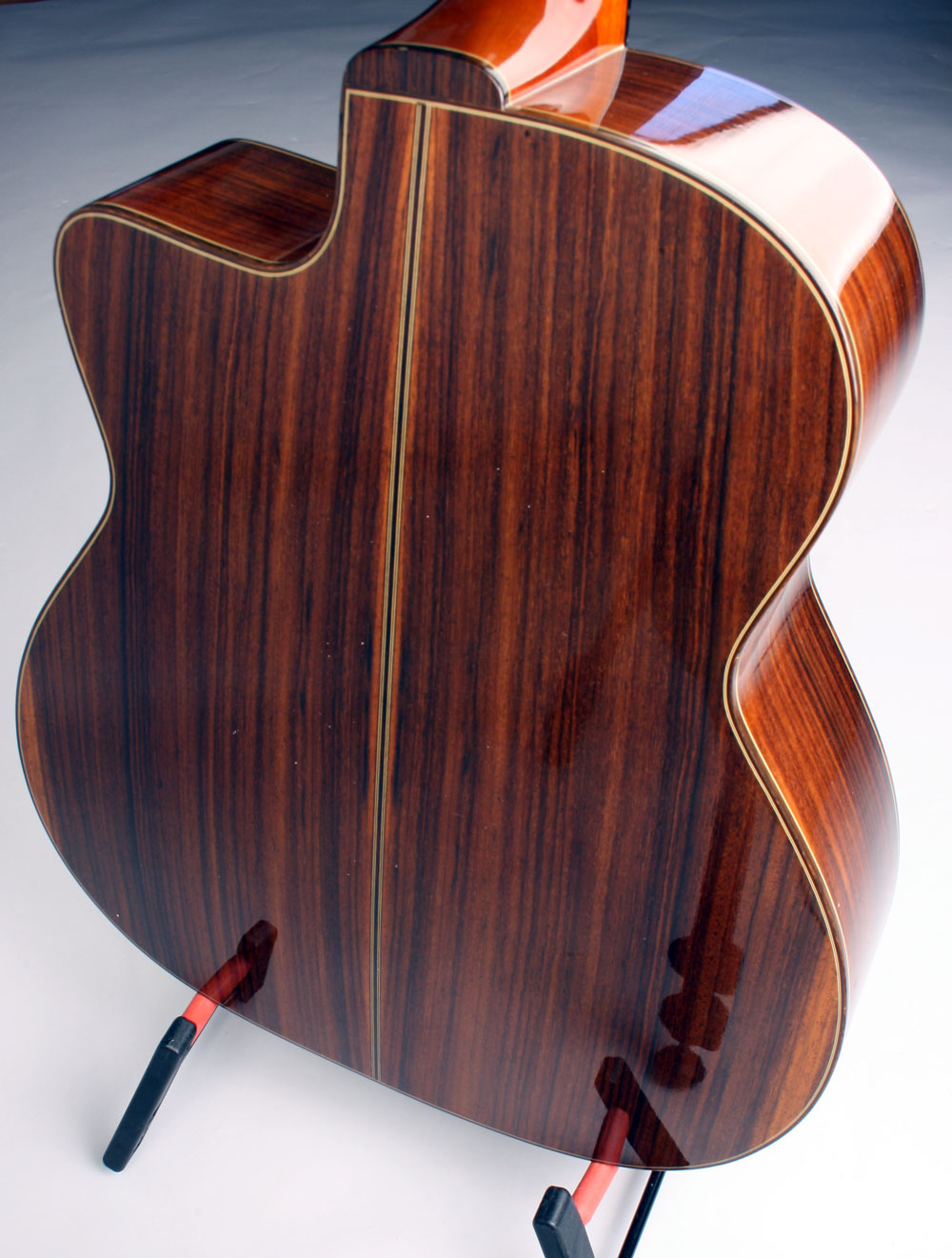 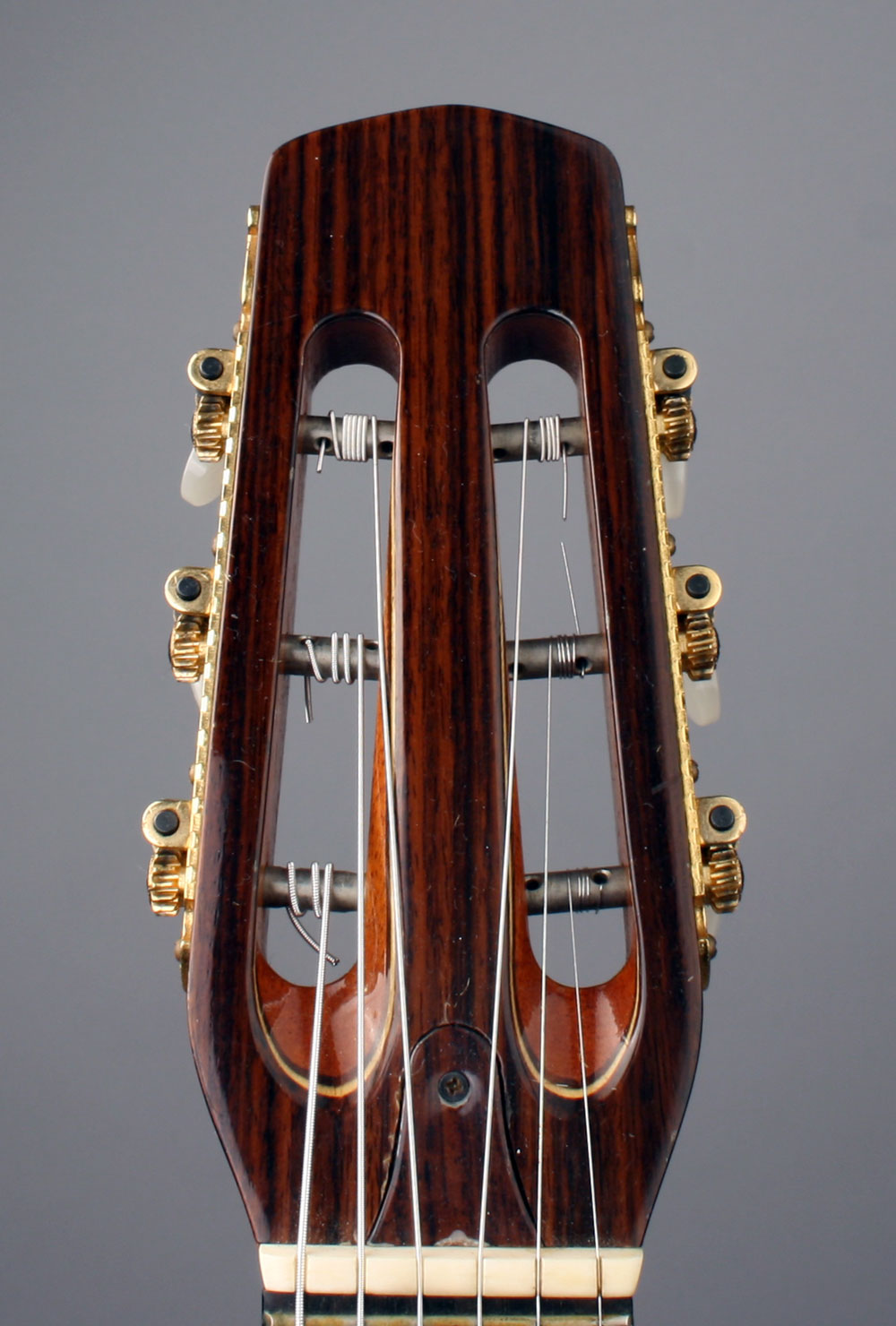 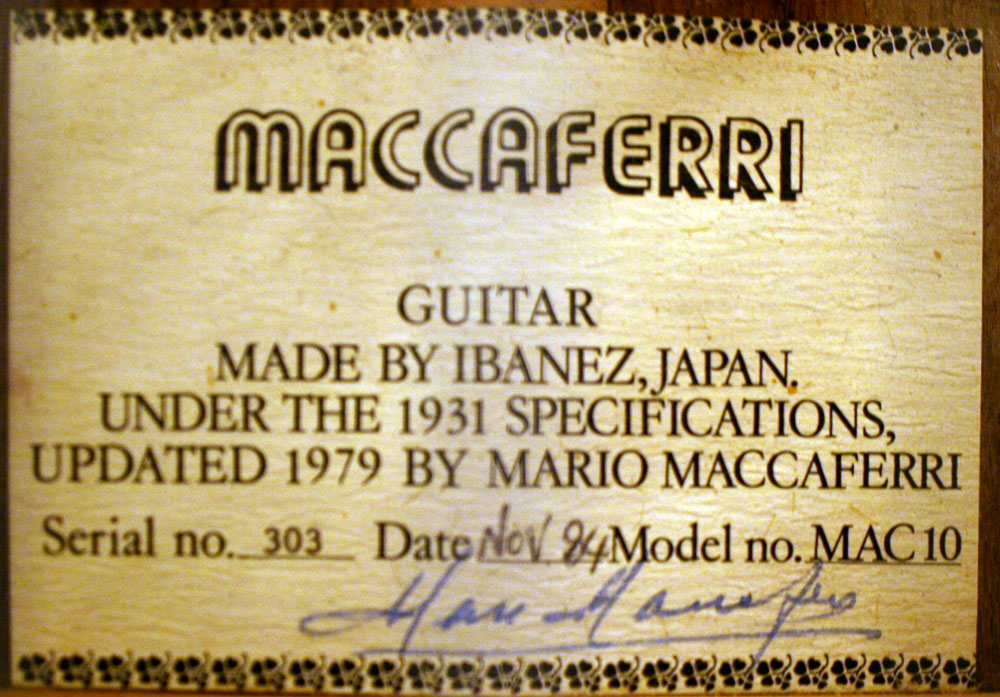 This is a very rare Ibanez Mario Maccaferri signature model! Made in Japan and signed by Mario Macaferri himself. This guitar is an amazing piece of Gypsy jazz history! How exciting to own something that was designed and even signed by the master guitarist and luthier extraordinaire Mario Maccaferri! More on the history below....

This wonderful guitar was made by Ibanez in the late 70s/early 80s. It features:

-An updated version of the classic Maccaferri guitar redesigned by none other than Mario Maccaferri himself!
-12 fret neck
-16" body
-660mm scale
-Indian Rosewood back and sides
-Mahogany neck

This guitar hales from the legendary "lawsuit" years of Japanese guitar production. During this time highly skilled Japanese craftsman were producing copies of Gibsons, Martins, Fenders, etc that looked almost identical to the originals and often sounded as good or better! These copies ceased to be produced after numerous lawsuits. Interestingly, the MAC10 's story is a little different, see below.

In early 1974, British guitarist Maurice Summerfield contracted Hoshino Gakki of Japan to build copies of the legendary Selmer Maccaferri guitar. These guitars were built by the Kiso Suzuki factory and sold under the brand name CSL. Around 1,300 of these guitars were made.

Later, Mario Maccaferri himself took interest in the project which resulted in the MAC10 model produced by Ibanez from 1979 to 1984. The MAC10 featured numerous design improvements and sold for almost twice the price of the CSL model. Only 440 MAC10s were produced. In the later years of production Maccaferri became critical of the instruments quality and refused to sign the label. This particular MAC10 was one that he approved and signed.

Some of the unique features of the MAC10 include:

-A 5 brace top (an extra brace was added between the soundhole and heel.
-A 4 brace back (the original Maccaferris only had three braces on the back
-A center spline on the back
-A truss rod accessed from the headstock
-Large 16" body (originals were 15 3/4")

Although the label says this guitar was made in 1984, the original owner (there have only been two owners) said that it was in fact one of the earliest ones made but it was kept in Maccaferri's office and didn't have a label put on it till the end of the production run in 1984. So this may have been a prototype which would explain some of it's unique features. There are a few differences between this guitar and the earlier models.

1) The scale length was increased to 660mm. Earlier models had a 640mm scale.

2) The top is a conventional two piece top, The earlier models had a four piece quartered top.

3) There is a zero fret (the earlier models had no zero fret.)

The condition of this guitar is excellent! It has been amazingly well preserved over the years. Other than some light scratches and a bit of fret wear, it seems almost new.

The sound is lush and full as you'd expect from a 12 fret D hole. However, this guitar has one of the rarest configurations for a Gypsy guitar: a 12 fret neck with a long 660mm scale. This combination of features results in sound which is very full for chords, but also quite snappy for leads. Most 12 fret guitars just can't produce single note lines that cut. This marvelous little machine will really allow your lead lines to pop. I've only ever had one other guitar like this before, it was a JP Favino: 1996 Jean-Pierre Favino. Also and astounding guitar!