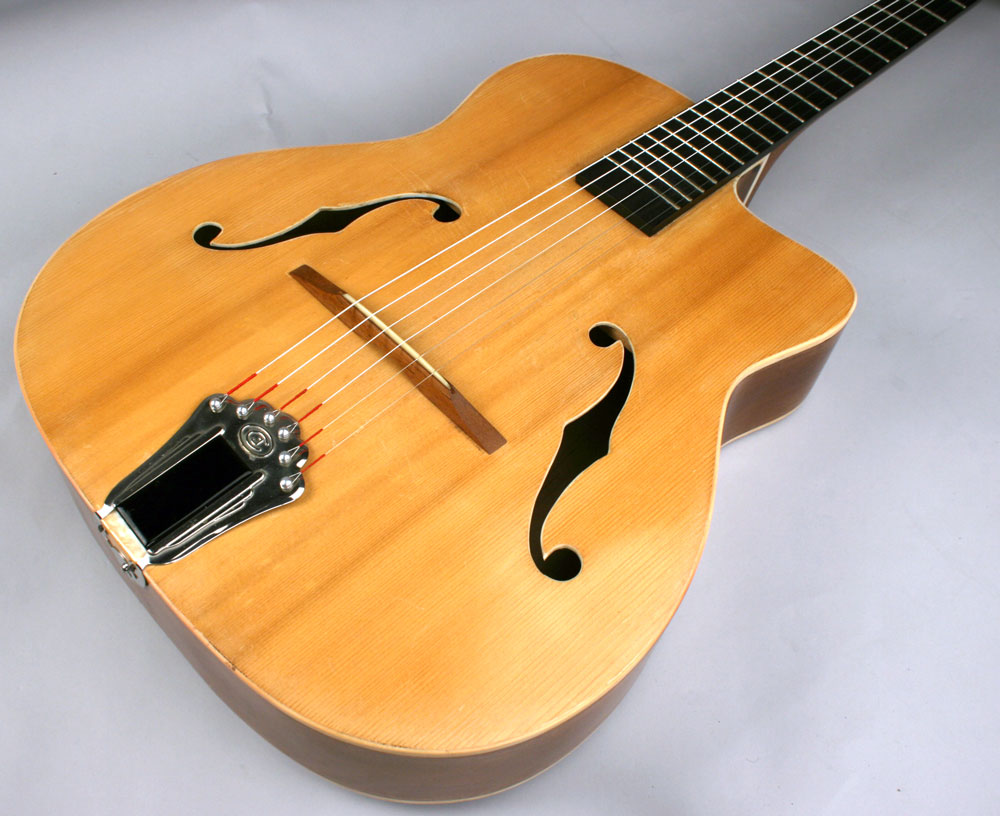 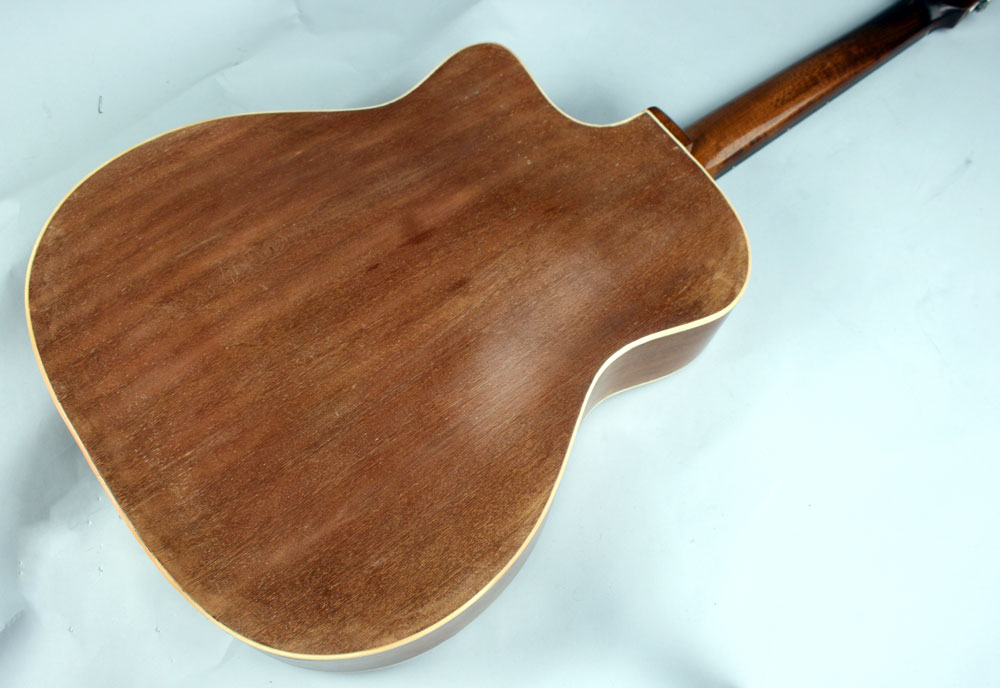 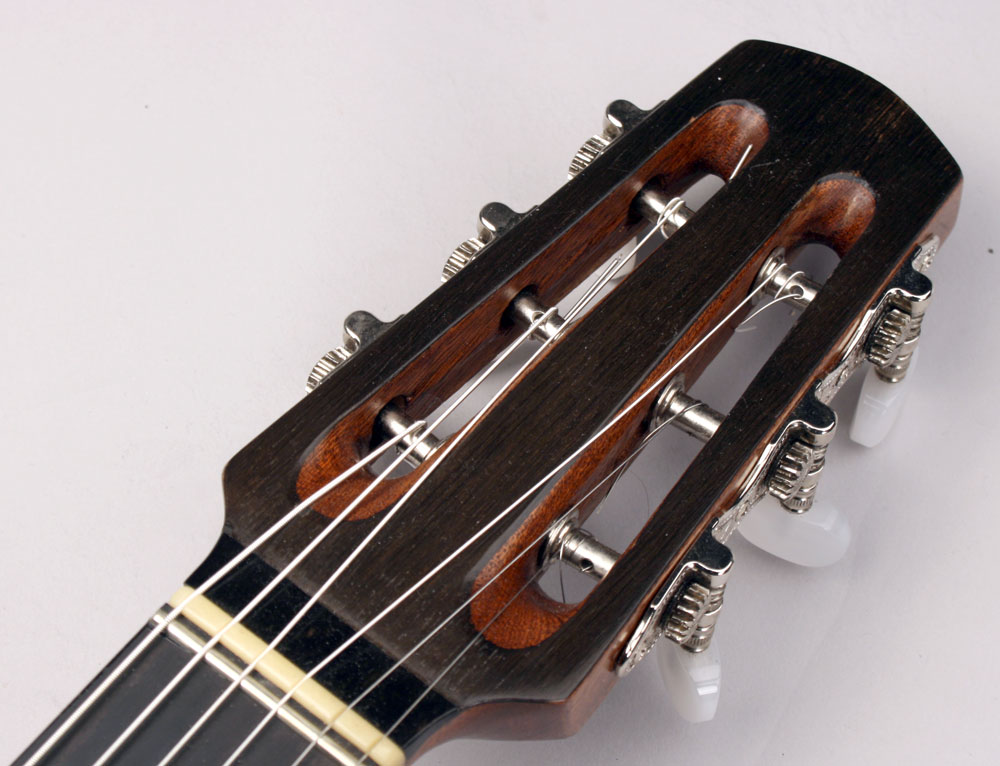 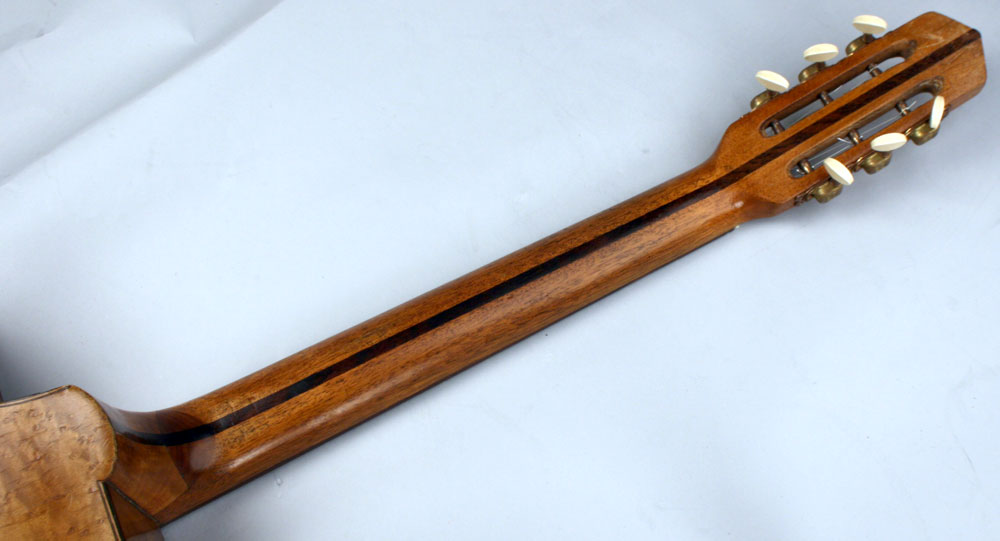 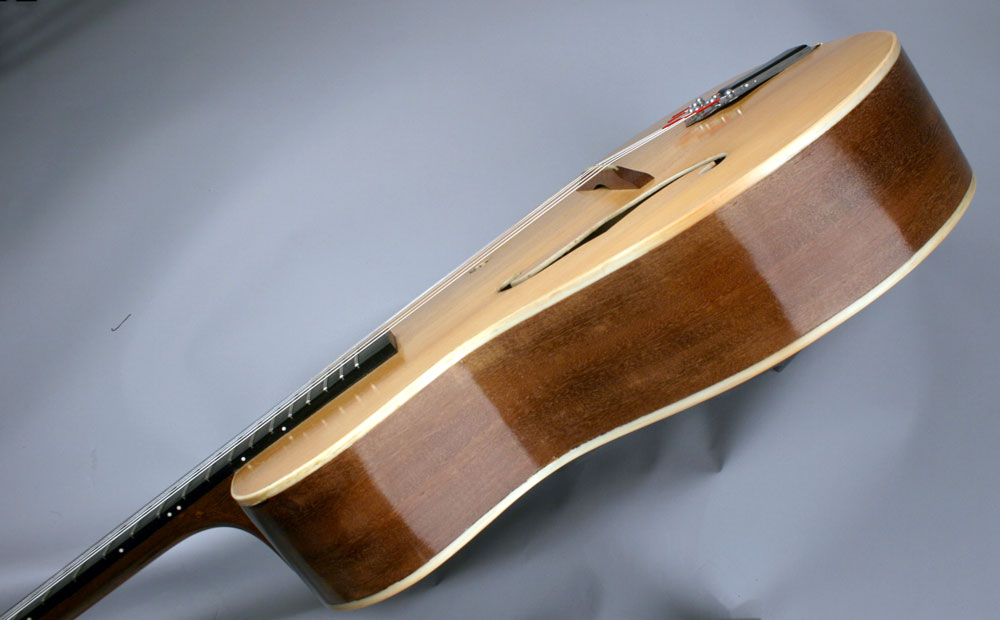 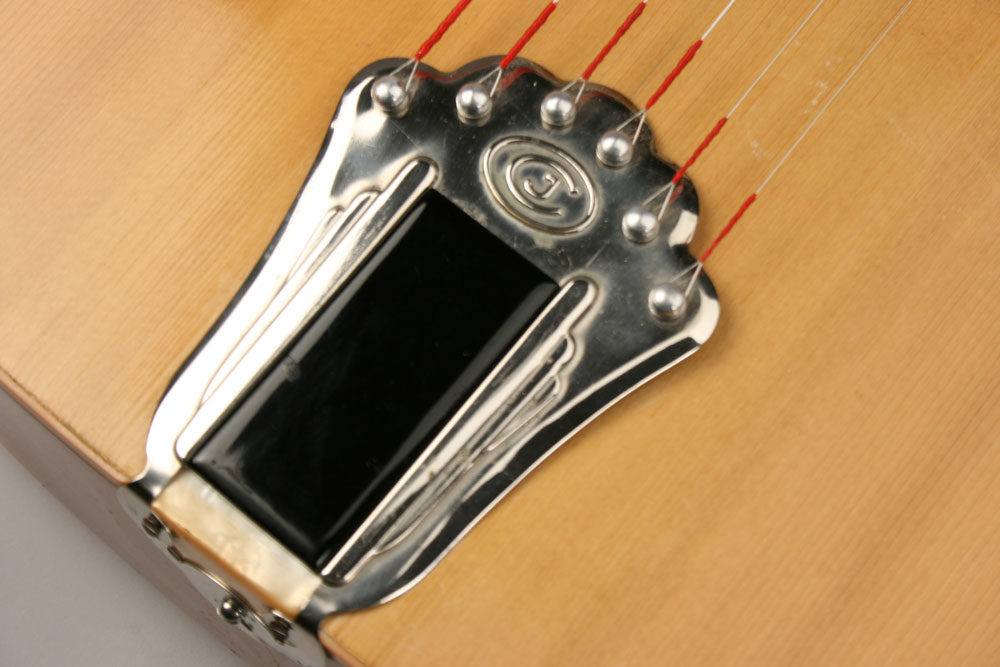 This fantastic instrument was built sometime in the 1950s by Jacques Castelluccia. Castelluccia was one of the many noteworthy Italian luthiers to make his name in France (along with Busato, DiMauro, Catania, Anastasio, Bucolo, etc.) This F hole design was inspired by DiMauro's famous Chorus model. It is very rare to find a Castelluccia built with F holes, making this one of only a handful of surviving examples.

While the price of guitars made by Busato (along with other Italian makers such as Favino and Maccaferri) having skyrocketed in recent years, Castelluccias have been largely overlooked. But after playing this guitar, I think anyone would agree that Castelluccia was also capable of building guitars on par with his more famous contemporaries.

This instrument features Selmer like dimensions: 670mm scale, a 15 13/16" body, but is only 3 1/2" deep. It weighs a mere 3.9 lbs. The back and sides are Cuban mahogany, the top is European spruce, and the neck is mahogany. The body and soundholes are bound with ivoroid binding. The original tailpiece features a wood insert and a MOT strip underneath (nice touch!) Amazingly the saddled bridge is original.The tuners were replaced with Schallers. The fingerboard was recently replaced and the frets are new.

The condition is astounding! It has a few scratches, dings, and pick wear. There is some minor binding separation in a few places on the body and one spot on the bass F hole.

Like most of Jacques Castelluccia's instruments, this guitar relies on only three braces. Why use five when three does the job just as well? I've seen so many four and five brace guitars with sunken tops, yet after 60 years this three brace guitar still has it's pliage intact. Apparently Castelluccia knew what he was doing.

Similar to Busatos, the top and back of this guitar are both arched.

Playability is great and compares well to any new guitar. It is currently strung with 10 gauge Argentines and has 3.4mm action.

This guitar has a Paul Beuscher label. Castellucia, along with Favino and other luthiers of that time, often built guitars to be sold in Paul Beuscher's store. These guitars were rebranded with the Beuscher label but otherwise do not differ from the models these luthiers made under their own names.

This instrument posses the tone and projection one would expect of some of the finest vintage instruments! In fact, in a blindfold test this guitar could easily be confused with some of the best Jacques Favinos. It has a wonderfully open, resonant voice with an upper mid-range "nasalness" that you usually only hear in the high priced pre-1975 Jacques Favinos. The thick mids of this guitar produce fat, rounded leads that are both present and satisfying. The definition and clarity of the low strings is particularly impressive. If your solos often stray into the bass register then you can be assured that this guitar will keep your playing from getting muddled. Chords have a great mid-range focus and the arched back really vibrates against your body when you play them. This instrument is so amazingly live, after every note you play it just shakes in your hands.

For the most part, in the Gypsy guitar world you get what you pay for. But here's a rare exception, exquisite vintage sound for less than a new Dupont, amazing! Castelluccia's are well on their way to becoming the next "it" guitar. There used to be a time when you could buy a Busato or Favino for $4000, but those days are long gone.