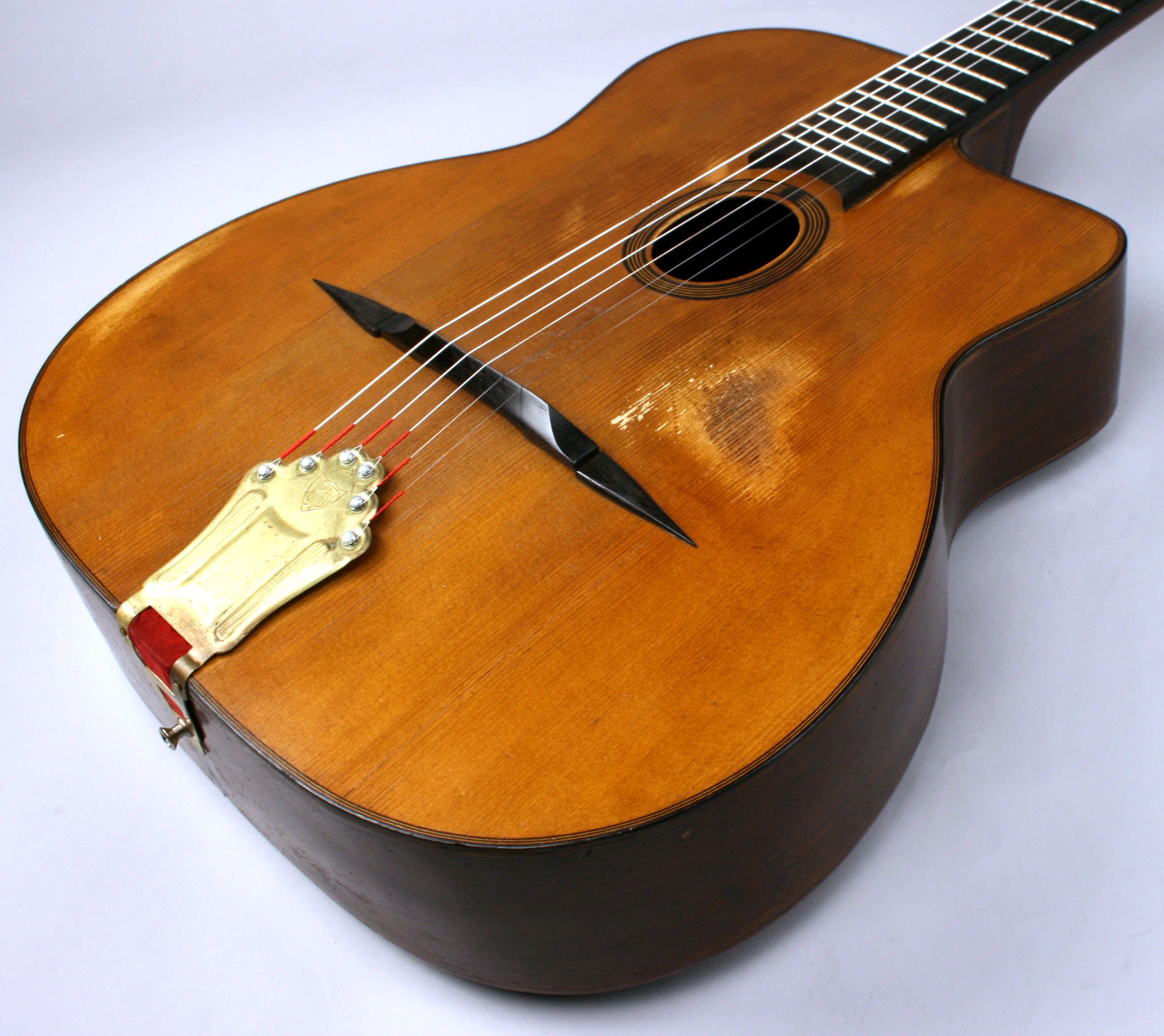 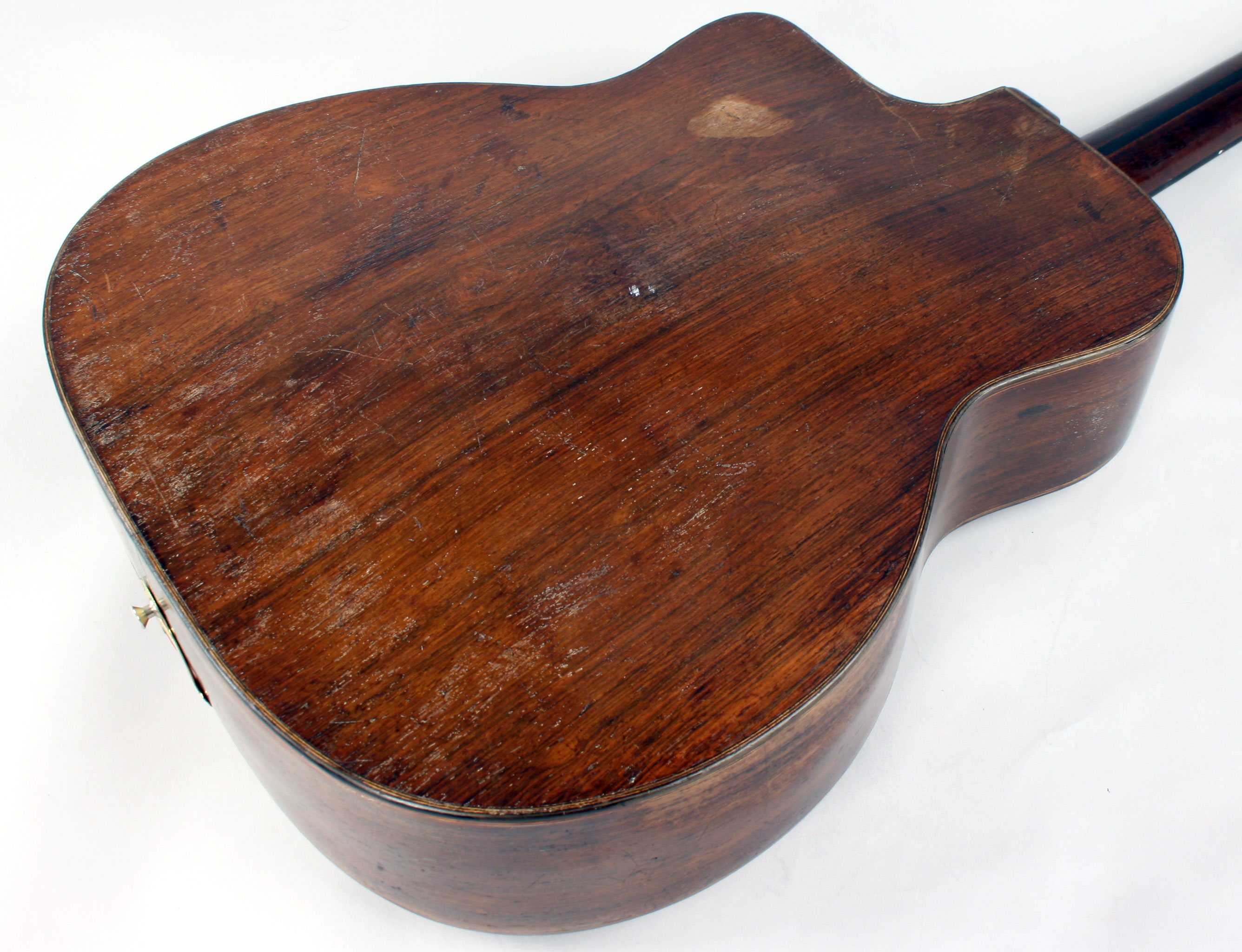 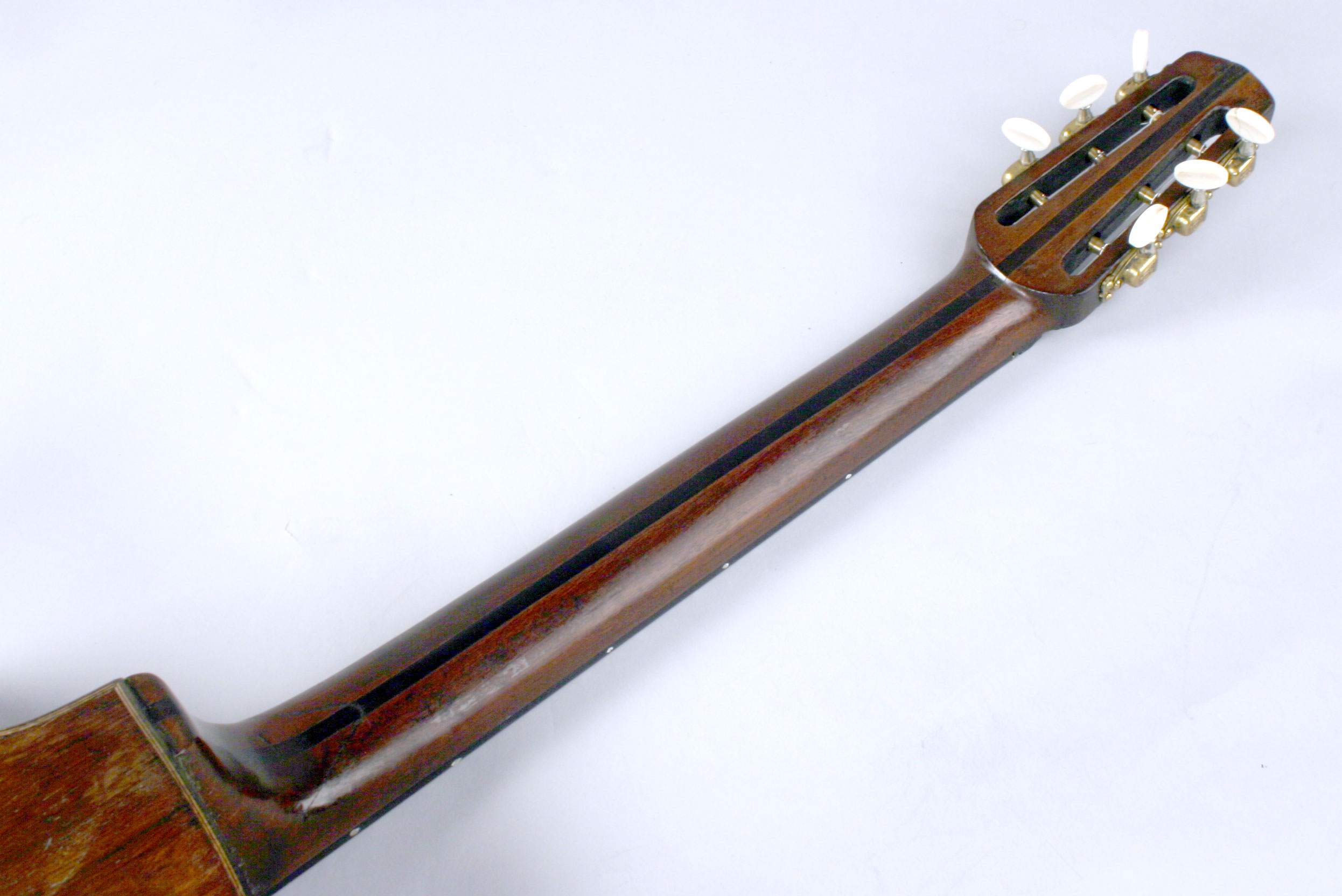 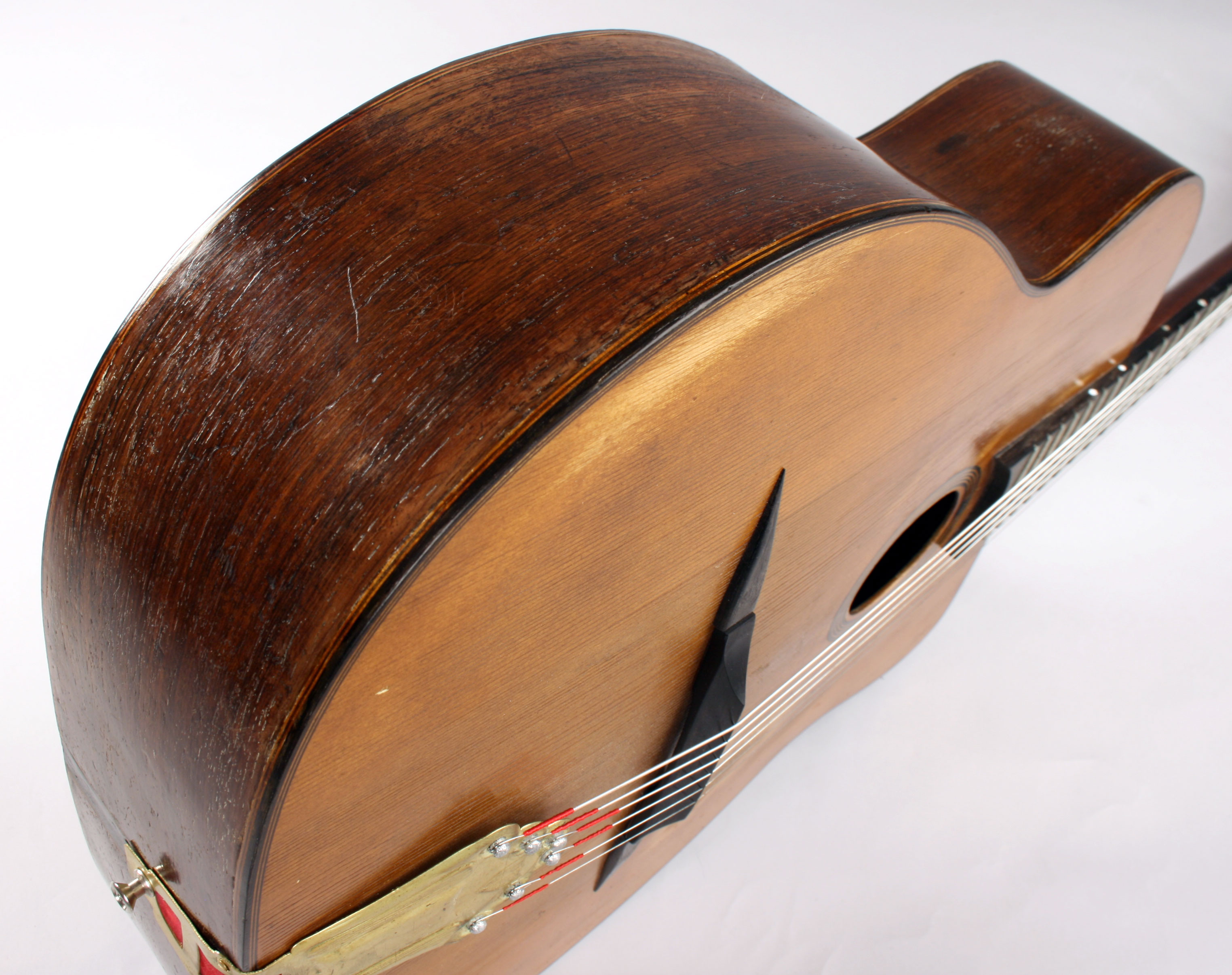 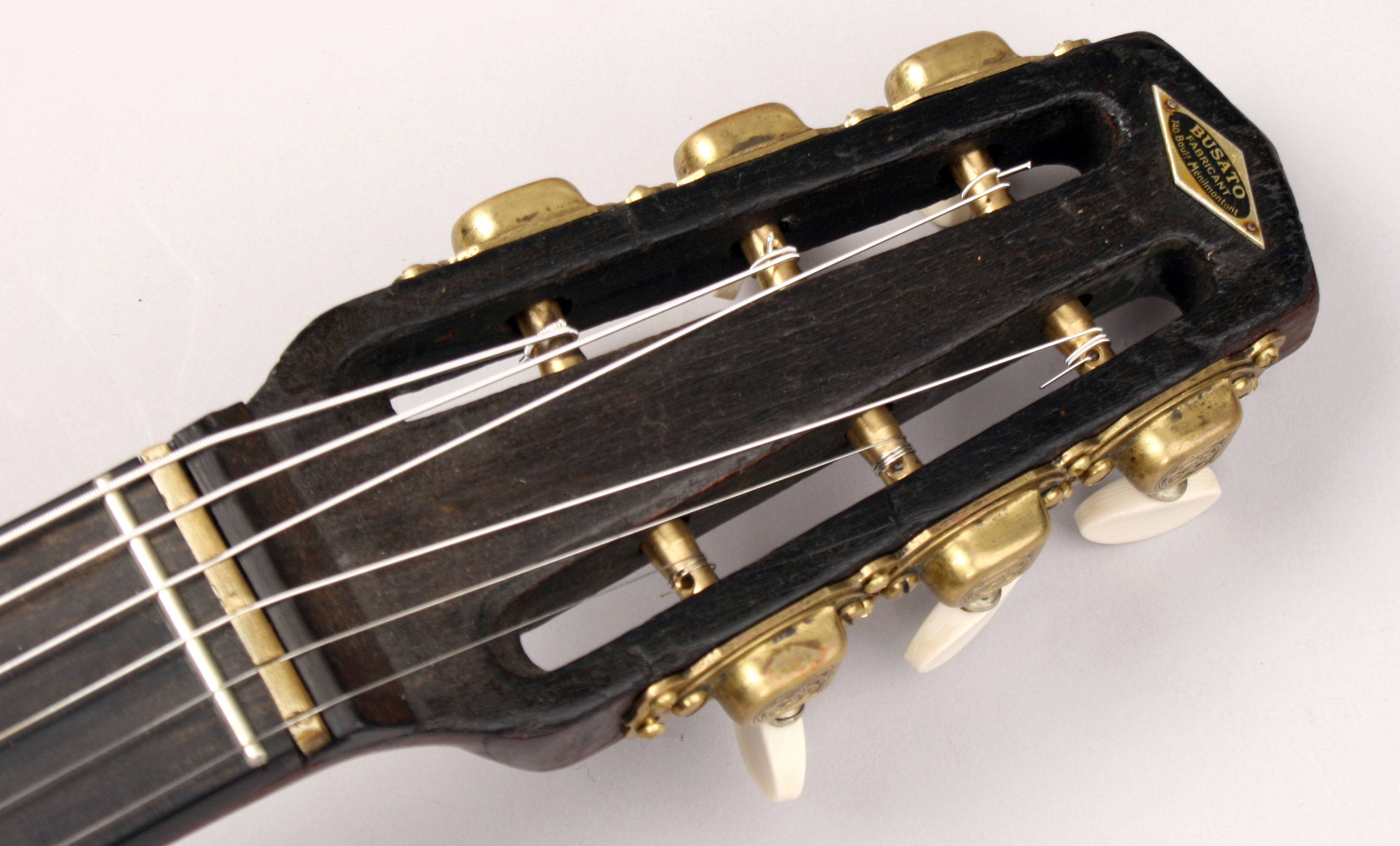 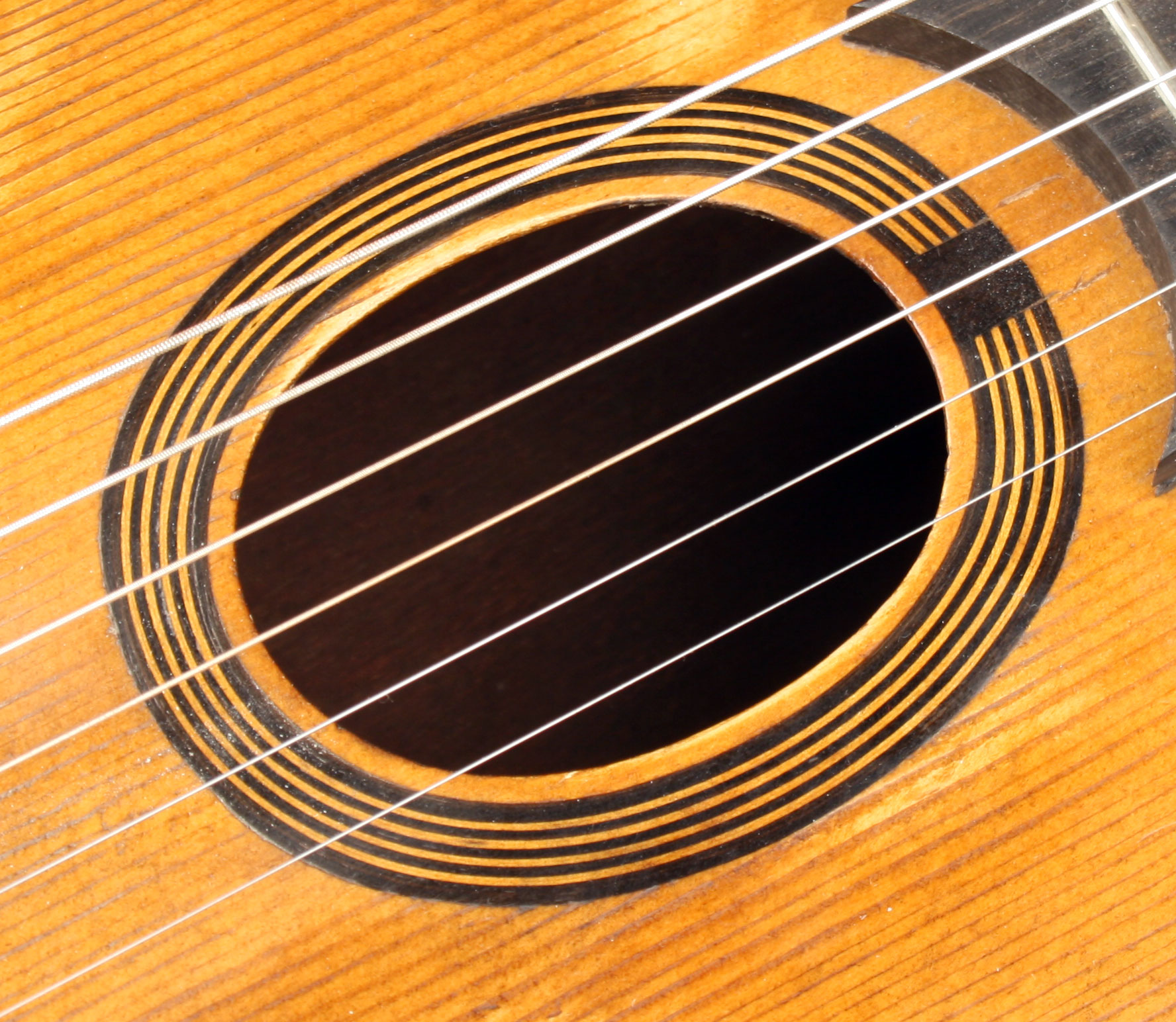 So what makes a Busato so great? Generally speaking, it simply outperforms other guitars in almost every way. First off, they are positively the loudest guitars ever made! I've compared Busatos to numerous classic Gypsy guitars such as Jacques Favinos and Selmers as well as new guitars by J.P. Favino, Dupont, ALD, and Dell Arte. A good Favino is pretty loud...but the Busato is just a cannon. A vintage Selmer is actually quite timid by comparison. The Busato has three tonal elements which really make it cut in acoustic settings. 1) It is extremely dry. It has little or no natural wetness (reverb.) This makes the guitar much more focused and is therefore much easier to hear in a loud jam setting. 2) The tone is very pure with very simple overtones. The fundamental pitch of single notes are very strong while the overtones are extremely clean and even. Very flute like in character. A Selmer sounds more complex, but is also somewhat "messier" sounding which dampens projection. 3) It responds to the slightest touch. Just barely strike the strings and you get a lightening fast bolt of sound. I really like this characteristic because you don't have to play these guitars hard to be loud. Busatos yield an exceedingly wide frequency response. They have a crisp, bright high end which gives your leads some sparkle and adds ambiance and clarity to rhythm work. There's not much mids, except for a slight upper midrange nasalness. But nothing like a Favino in that regard. Like a Favino, there is far more low end than a Selmer, and it's an incredibly tight, clear low end. Not mushy or ill defined in anyway. The tight low end of a Busato mixed with it's dry character really make it excel for rhythm playing. It's just so clear. The high end cracks like a whip and the bass notes are like a kick in the gut.

This Busato is notable for its unusually rich and smooth sonority. It has a thicker midrange than most other Busatos which yields big, beefy chords that are full and satisfying. The high end is warm and round, giving lead lines a flowing, mellifluous quality. Like most Busatos, it also has plenty of volume but what makes this one special is it's refined, highly listenable tone.

The dimensions of Busatos are fairly close to that of Favinos. The body is 16 1/4" across the lower bout (Selmer is 15 3/4", Favino is 16 1/2".) Busatos are also the curviest Gypsy guitars out there. The bombé (top arch) is the most pronounced I've ever seen on a Selmer type guitar. It's like a huge bubble under the bridge. The back is also beautifully arched.

This guitar has Brazilian Rosewood back and sides, a spruce top, and a three piece mahogany neck with an ebony spline. The top is actually 4 separate pieces of spruce which is very common for Busatos. So many of the "cracks" you see are actually the seams of the 4 pieces. This guitar has the original BB tuners and tailpiece. They are in the best condition I've seen.

The condition of this instrument is very good. There are no cracks and the fingerboard and frets are new. It does have a fair amount of pickwear, dings, and scratches, but other than that it's very clean. It's extremely rare to have a Busato that is this well preserved. Very few have survived in such immaculate condition.

This guitar is currently strung with Argentine 11s and is incredibly easy to play. It plays like butter with no buzzes or other sonic problems. Action is shockingly low at 2.6mm! Very few new guitars can get that low and still sound good.